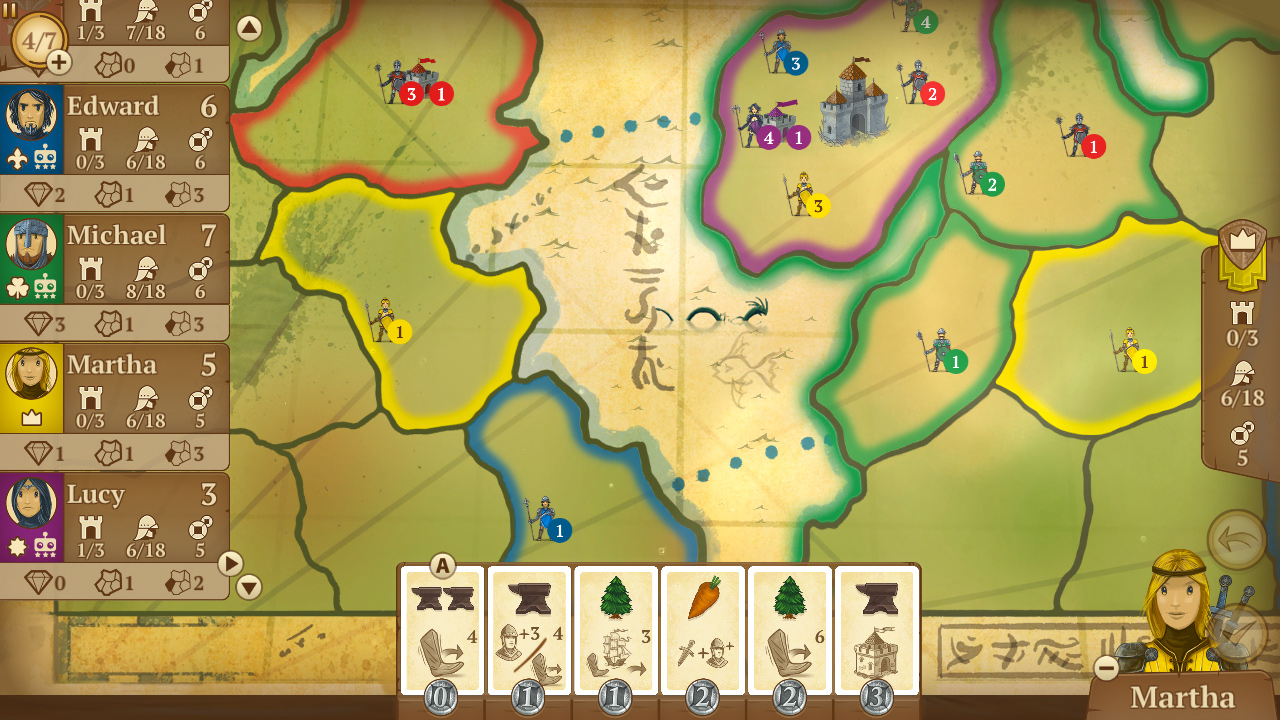 I’ve always enjoyed a good board game, but there’s a downside in partaking in such a hobby and that is sometimes finding the time to play through a complete game. Depending on the amount of players and on what sort of game you play, you can easily lose several hours playing. Heck! I’ve even played games that have taken several nights to get through. It would never have been a problem during my youth, but now I’m older and with family commitments, finding the time to sit down for a good board game session is something that has now, sadly, surpassed me. However, my prayers have now been answered as the quick-fire board game, Eight Minute Empire takes a turn to land on the Nintendo Switch.

Developed and published by Mobo Studios and Acram Digital, this digital board game follows a faithful recreation of the award winning physical edition by Ryan Laukat. The game plays in a similar way to the world-famous Risk board game, at least in terms of card distribution and continent invading, but in a more quick-fire way that ensures that each game lasts up to eight minutes in length. You play the game with up to five players, each of you starting at a central location on a world map and taking turns to pick from a selection of six cards that are displayed on-screen. The objective of the game is to accrue as many points within thirteen rounds, or eight minutes; whichever comes sooner.

Scoring is based on a number of factors: collecting resources and continents controlled. This is achieved by strategically selecting a card that gives you the best possible placing. The game displays a series of six cards, each one denoting a particular resource and value, plus the ability to build cities, recruit troops and move placements across borders or over the sea to new continents. Each of these cards also have a monetary value to them and from a starting pool of coins, you can choose to buy specific cards. However, run out of funds and you are left with no choice but to go for the cards that cost zero coins to buy; sometimes forcing you to pick a card that isn’t best suited for the move you are looking for. 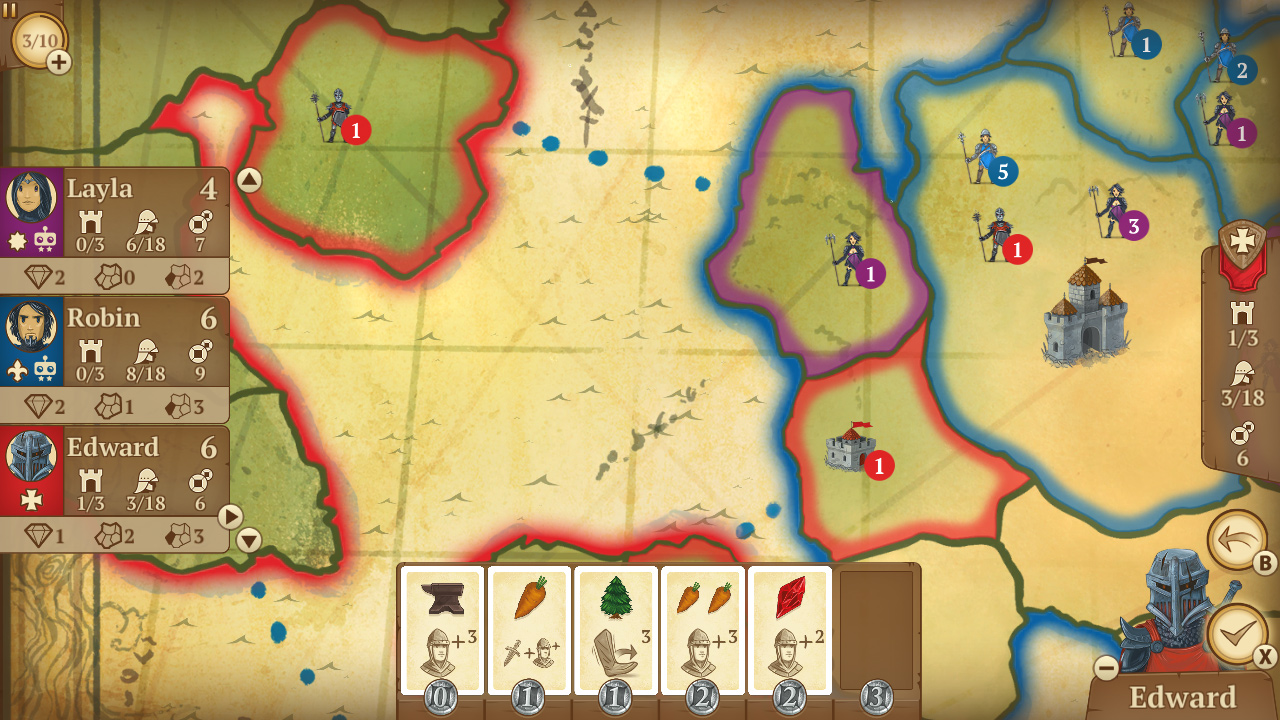 Each of the players have a table that displays the amount of resources they own, so you can always keep an eye on every player and their positioning within the leaderboard. The more resources you own at the end of the game, the more points you get. However, points are also awarded for the amount of provinces and continents owned. This is achieved by recruiting troops and moving them across land and sea. Should you have the most amount of troops within a province, then you gain the points for it. The same also applies to continents in that, if you own the highest proportion of provinces within that continent, then you also gain points for that too. There’s a strategic value to the gameplay here, with a constant battle against other players’ troop movements and numbers, as well as picking the right card to give you an edge on your turn; although an element of luck can play a turn too with the random dealing of cards on each turn.

The order of play is determined by each player bidding an amount of coins on who should kick off the proceedings. This too, can have an impact on the overall game, as the lesser amount of coins you start with, the less chance you have of buying the card you need. Should you run out of coins mid-game, as is often happens, then you have no choice but to pick the card with no numerical value. Again, luck plays a part in whether that particular card is useful to you or not. However, it isn’t just about troop movement or resource collection either, as some cards can give you the ability to destroy troops should they share the same province with you. If you have three placements on a particular province and your opponent houses the same number, then you can reduce their total by one, giving you overall control of that province. 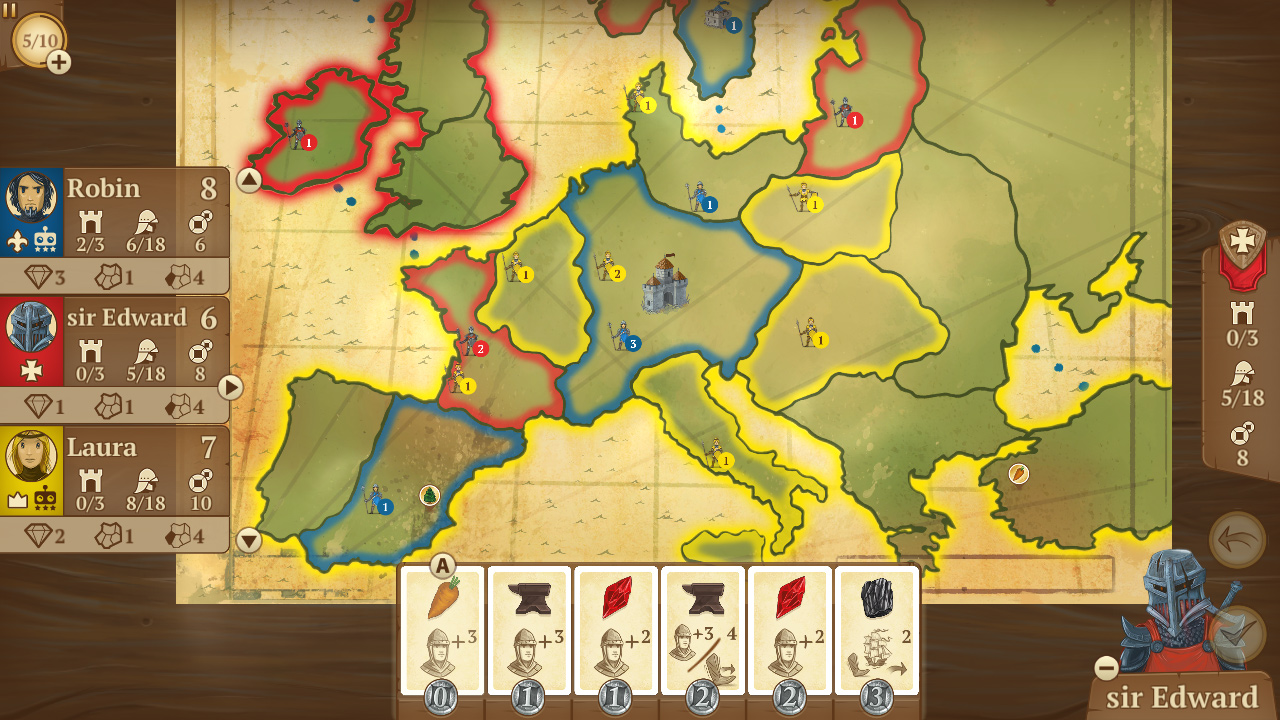 It sounds strategically difficult, but in reality, it’s an extremely easy game to get into. It’s also a quick-fire game, with each turn taking only a couple of seconds. With a thirteen round or eight minute limit, each overall game never takes long to play through, making this an ideal board game for when time isn’t on your side. Fancy a game during your lunch break, or a quick burst whilst on the bus? This game allows you to do that, even with friends, with its pass-and-play local multiplayer. Should you have no-one else to play the game with, then you can also take it online, although unfortunately, I was unable to find any games whilst reviewing this title.

To add a mix to the proceedings, this digital version of the game also comes with a series of additional content with expansions and maps that contain variations on the rules to mix up the strategies. This brings the total of boards available to play on up to seven different varieties in order to keep things fresh. If you’re new to the game, it comes with an extensive rule book that details all of its mechanics in detail and also allows you to play through a tutorial that introduces the basic premise of the gameplay. However, it’s a simple game to learn and in no time at all, you and your friends can be playing competitive games against each other.

Overall, Eight Minute Empire presents a solid and faithful recreation of the physical board game. It’s sublimely easy to get into and set up and play; making this a sure quick-fire way of passing the time. It fits perfectly within a casual style of play, but also provides hours of entertainment for a more longer haul. With the addition of extra content and variations on the rules, you can always find some way to play the game and in terms of longevity, is a game that you can never tire from playing; making this a title that represents great value for money. Everything is presented in a nice fashion, from the aesthetical look to the audio, plus it’s all easily laid out for quick referencing with card and troop placements, plus it also allows for touch-screen control for quick and easy movements and selections. So, if like me, you struggle to find the time to play a decent board game, then give this title a try. It’s strategic, easy to play and only lasts a few minutes from start to end.

Eight-Minute Empire is a faithful recreation of the physical board game; with quick-fire, strategic gameplay that never lasts more for eight minutes at a time.