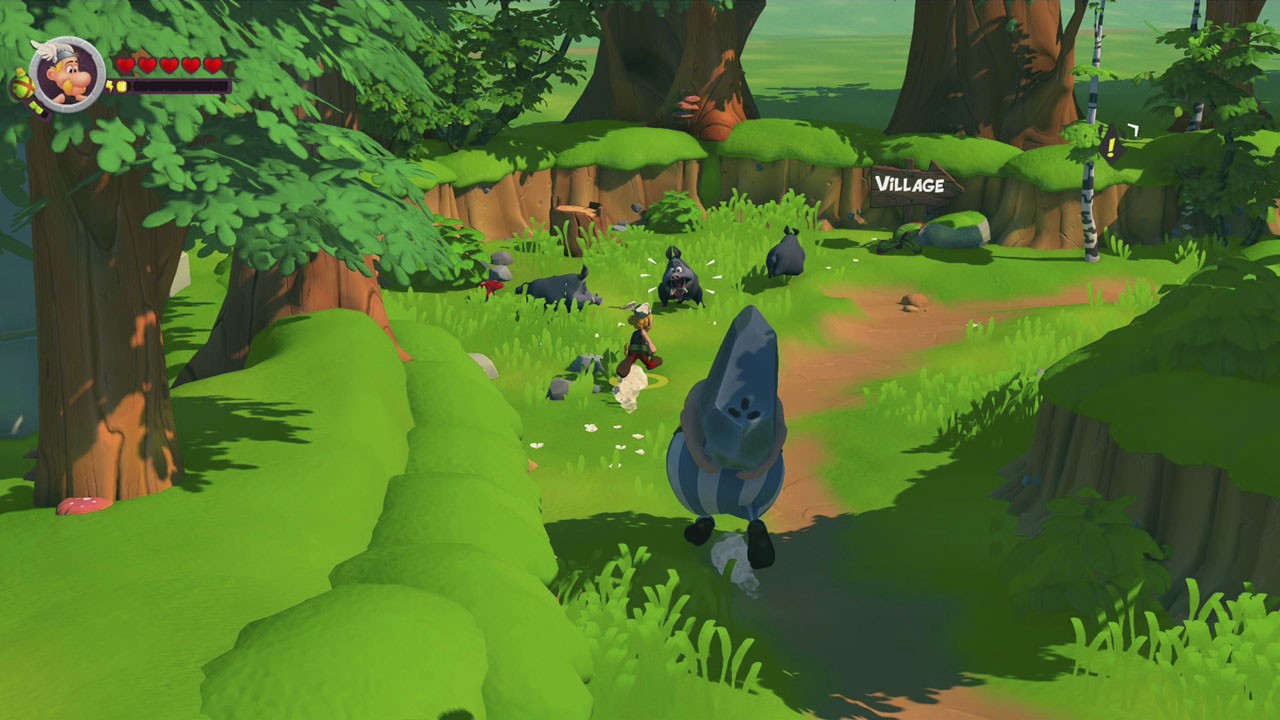 It’s hard to imagine what life used to be like before the home comforts we take for granted were popularised into every home. Take home consoles for instance, or DVD and Blu-Ray players. They’re all part of modern life, but I can remember the days when we could only watch the latest films four or five years after their cinema release during a Christmas premiere, or when playing Pong on an Atari 2600 was a rare find and the latest tech. However, I’m not old enough to remember when TV’s were a rarity, but I do remember the popularity of comic books being a form of home entertainment; a medium which has spawned many famous characters through the decades. Publications such as The Beano had Dennis the Menace, The Eagle had Dan Dare and we also had the hapless Gauls, Asterix & Obelix. If you’re not old enough to remember that duo, then fear not, as Osome Studios and Microids have brought the characters to life as Asterix & Obelix XXL3: The Crystal Menhir humours a release onto the Nintendo Switch.

The story takes place in 50 B.C., during the occupation of Gaul by the Romans. However, one small village remains untouched by the Roman Empire and it is here, in Armorican, where are heroes Asterix & Obelix reside. After a tutorial adventure that sees the duo break into a roman fort to fetch the mail, the village druid, Getafix, requires their help to find Hella Finidrir, the High Priestess of Thule. In order to find the location of the missing Priestess, our heroes need the help of the Menhir, an ancient crystal that will help show the way. However, in order to power up the crystal, three shards need to be acquired; all of which have been scattered over the land and it’s here where the adventure begins.

The game plays as an action adventure, viewed from a third-dimensional and isometric perspective, all of which incorporates platforming, exploration and combat. As you search for the missing shards and, ultimately, the High Priestess, you’ll venture across a series of locales, from the wooded areas of Armorica to the heated deserts of Phenicia and through the frozen planes of Thule. Each area has a host of objectives and side missions to achieve that sees you hunting wild boar, taking down Roman fortresses and embarking in some mystical magic. There are also a series of puzzles that need to be overcome, from activating switches to open gates and using the elemental properties of any found shards to manipulate the environment. 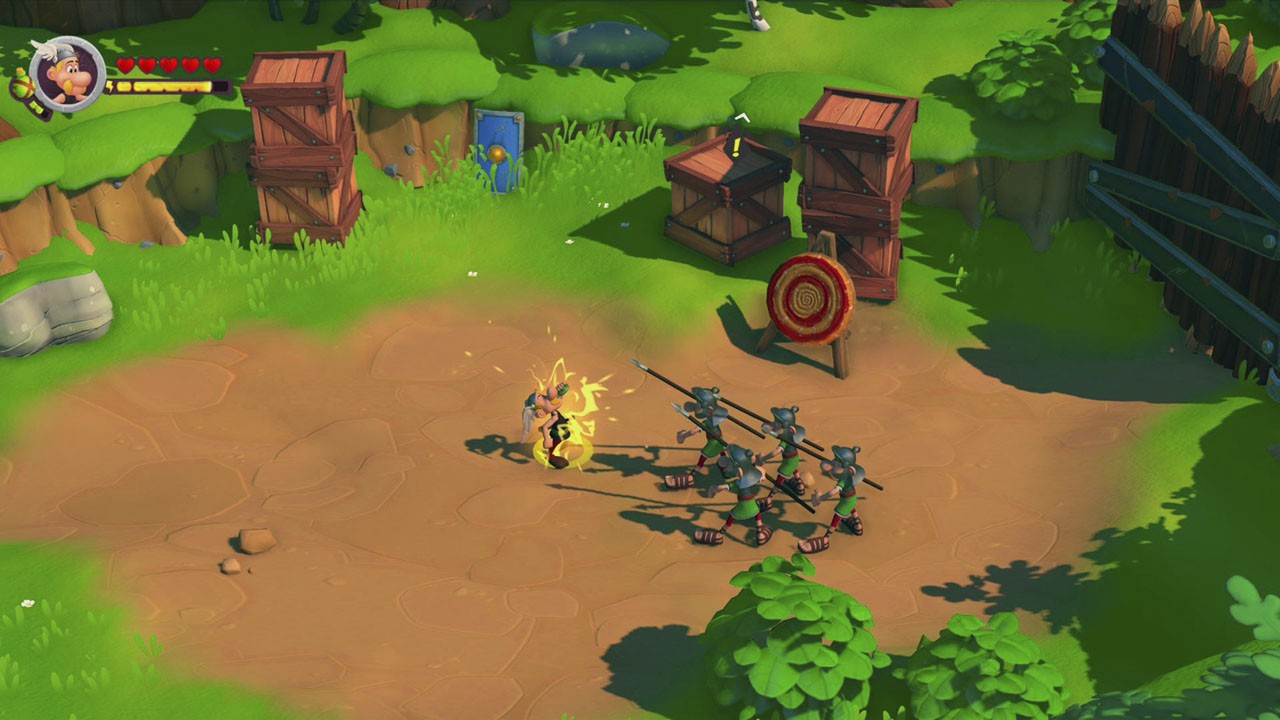 Everything is presented in a colourful palette that is nicely detailed and attractive to younger players. It’s all complemented by a tight control scheme that makes both the exploration and combat a fun component of the game. This is largely due to the comedic values of this title, especially within the variety of combat moves that you can utilise. Your basic attack is fully capable of taking out the majority of enemies or wild boars with ease. However, by pressing ZL and any one of the face buttons, you can perform spinning attacks, uppercuts and throws with some hilarious results in their animations and executions. It makes the combat a very fun part of the game and it’s a good job too, as there’s a lot of it.

To further bolster your arsenal of moves, you can also drink a potion that gives you unstoppable powers, forcing you to dash from enemy to enemy, perform a string combat hits and generally be a pain in the asterix to those pesky Romans. There’s also a variety within the types of Romans you’ll come across, from basic foot soldiers to long-range archers and even sentries that call for reinforcements as they signal the alarm from their horns. There’s always something going or something to see as you progress through the levels, with a number of collectibles, power-ups and puzzles to keep you entertained between the bouts of fighting. 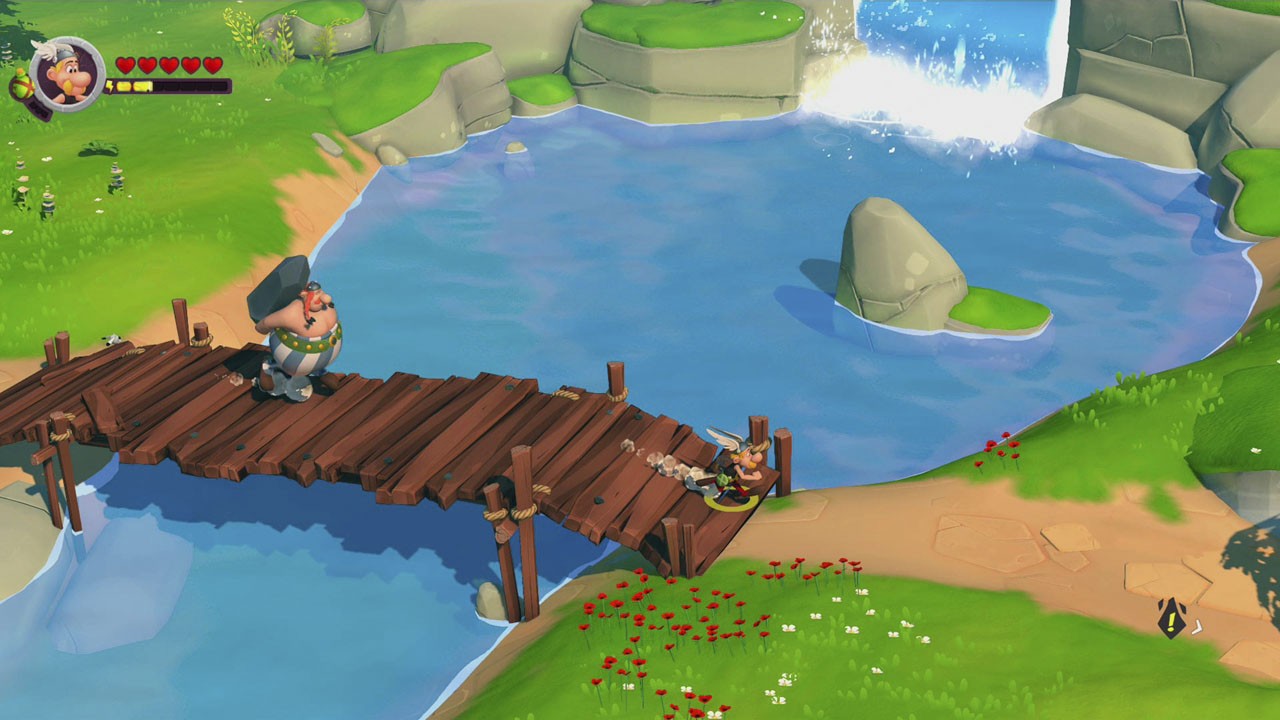 There’s a strong element of teamwork at play, often being needed to overcome puzzles or deal with particular enemy types. Asterix is more speedy, whereas Obelix is more about brute strength. This is further enhanced by the game’s ability to play co-op with a family member or friend. Although the game plays particularly well in a solo capacity, its co-op capability certainly takes it up a notch as you share the adventure with another player; often resulting in some hilarious moments of combat and puzzle solving. In fact, what the developers have captured here, is the true essence of Asterix & Obelix that faithfully recreates the charm of their original comic-strip beginnings. The game focuses strongly on having fun and holds some very high comedic values with characters such as Getafix, Cacofonix and Vitalstatistix; although younger players may not necessarily understand all of the humour present within the game.

Despite this though, this is a game that is perfect for younger players, with its pleasing visuals, tight gameplay and generally fun mechanics; making this a very good family game for parents and their children to play or for a pair of siblings to work together instead of fighting over rivalry. It’s all fully voice-acted and its cut-scenes take on a very cartoon-style presentation; in fact, the whole game plays and looks like an interactive cartoon and comic-strip in its comedy and style. Although generally fun, the game does contain some minor nuances, mainly revolving around some camera angles or the distinguishing of certain enemies amongst the mayhem of mass brawls, but in all honesty, these are tiny annoyances and never really detract from the overall fun to be had from this game.

Overall, Asterix & Obelix XXL3: The Crystal Menhir is a game that I had a lot of fun with. Anyone who remembers the two Gauls from their childhood will undoubtedly find the same level of charm as I did with the game, but people who aren’t familiar with the comic book will also enjoy making acquaintances through their adventure together. It looks great, plays fantastically well and is hilarious in many of its elements, plus you can even bring a friend along for the ride with its local co-op play. If you’re looking for a solid game that is full of charm, comedy and holds a satisfying level of playability, then you won’t go wrong with this game. Honestly, you’ll have a Gaul playing it.

Asterix & Obelix XXL3: The Crystal Menhir contains an empire full of gameplay and humour, meaning you’ll simply have a Gaul playing it.