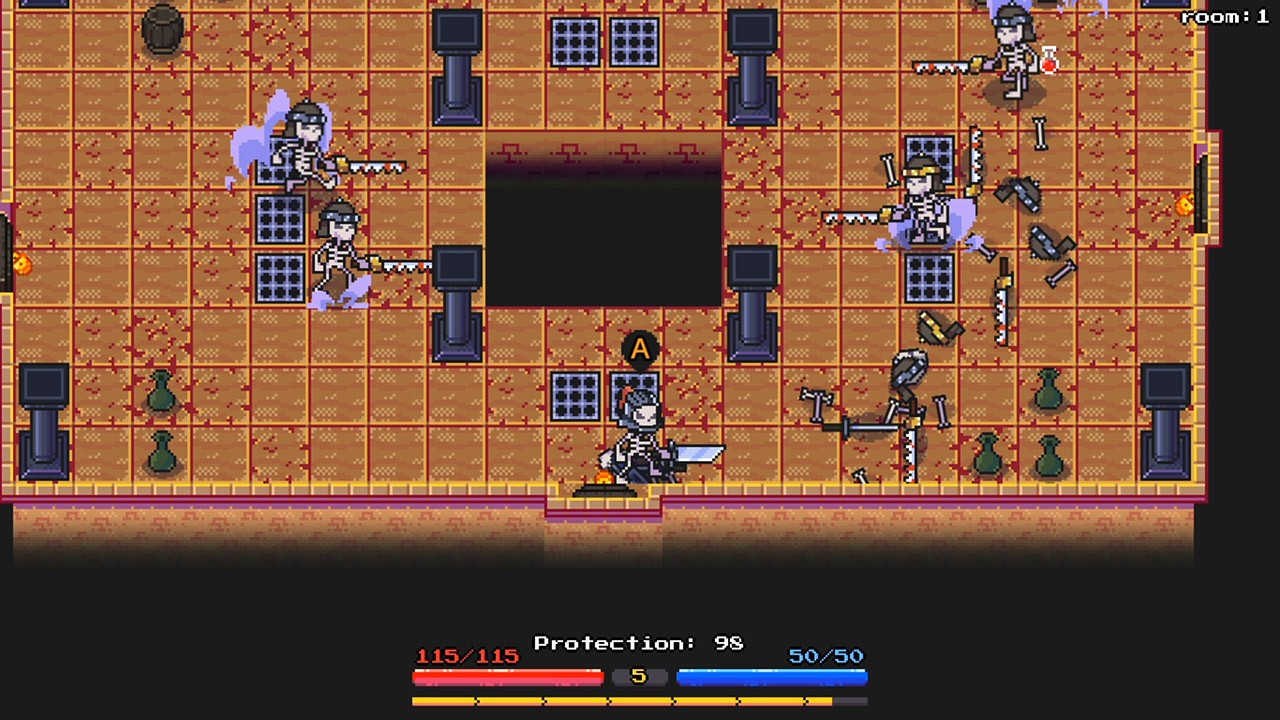 I feel like Drageus Games had a bet going inside the office. The bet was that they could put together a game idea with the fewest number of variables or fleshed out ideas behind it possible, but still have it be procedurally generated, and I would end up reviewing it. Seriously, I’ve proven time and again that “roguelite” or “randomly generated” is the key to getting me to try a game, and here I am. Ashamed, a fool, and with very little to show for my time. I want to say that this is something that I only spent a minute on, but I did play for close to an hour to make sure that I fully understood what was going on here, which is why I’m so confident in my assertion. Skull Rogue would have been a flash game fifteen years ago, it would have been an iOS game seven years ago, but, since the Switch is the breeding ground for quick and dirty games, it’s here, and not many people are better for it.

There’s no plot to Skull Rogue. You play a skeleton, fighting other skeletons, in a dungeon that has quite a few rooms and terrains to work through. And by “terrains” I mean different colored dungeon floors with various obstacles, which are usually spikes or spider webs. You have four waves of enemies to get through, each one a bit denser than the last, and, upon completion, you move into the next room, which is delegated for you seemingly at random. Even though each dungeon room has four doors, only one will open and you need to go through it. As you fight the skeleton mobs, they do gradually become stronger, having more HP, larger weapons and better defense, but not necessarily better or different attack patterns. Kill so many skeletons to “level up,” which gives you a point of skill allocation to use at the Hero screen in the main menu. Keep going until you delete the game or start physically retching from repetition, whichever comes first. 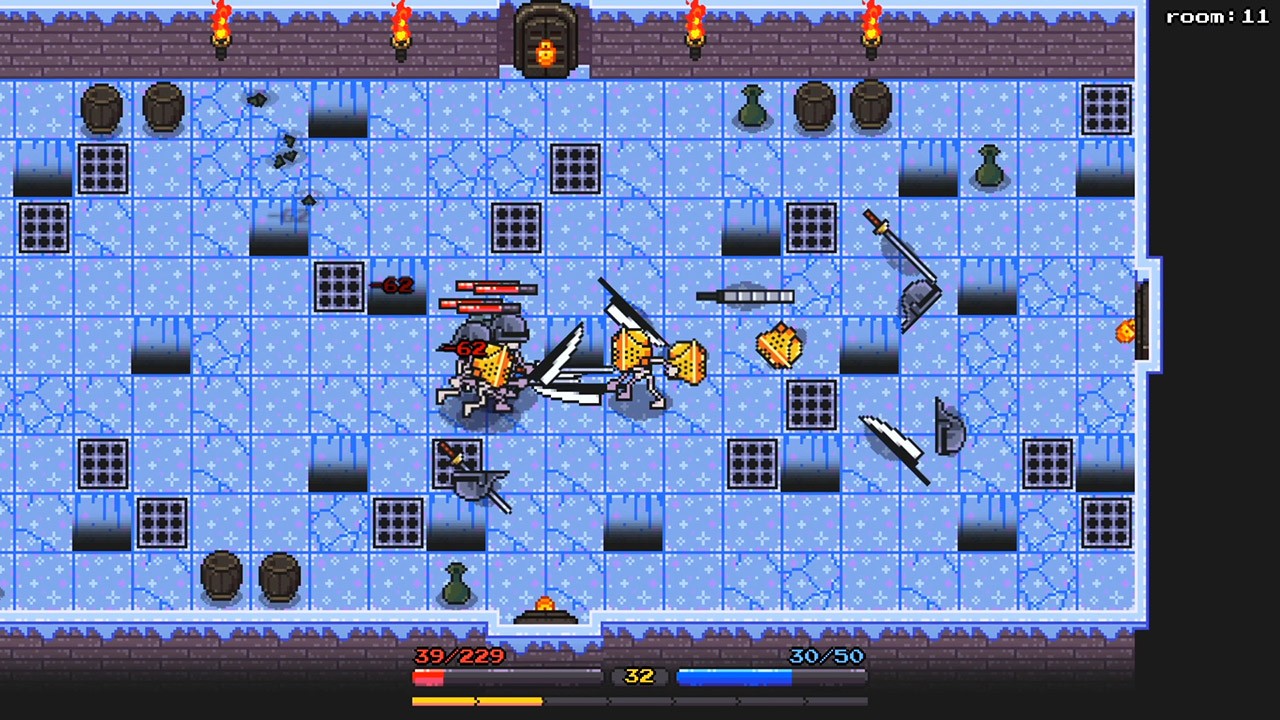 On paper, Skull Rogue seems like a great time killing game. The enemies each drop either weapons, helmets or both, and you can grab these on the fly to hopefully improve your own situation. Your sword weapon has a sort of ranged arc that you can increase, and you can also drop “magic bombs,” which are literally bombs with a blast radius that you use MP to drop. Various pots and barrels that spawn in the new rooms may or may not have HP and MP vials, so you can sometimes get lucky and grind yourself some healing factors through destruction. Plus, the enemy waves can get a little intense, especially around room 4 where the mobs begin to be bigger and stronger. A great strategy, level wise, is to buff your HP and your attack radius so that you have more range to swat at monsters and to stay alive if things go south. It’s not much, but it could have been a fun little deal if it wasn’t for the fact that there are two key components that deal a serious blow to the longevity of the game.

Firstly, there’s too much randomness in the dropped equipment. Skull Rogue has different parameters for what things will be (max numbers based on mob range), but there’s no defining characteristics for what makes it happen. The appearance of weapons and armor has no bearing on their actual strength: a bloody, saw-edged sword might actually be weaker than your starting weapon, while the fencing foil looking sword somehow does a brain-numbing 30 damage, making it the best drop you can get for the first three rooms, and I got it in the first killed monster. The armor is a whole different thing because you need to know your starting helmet is a protection of 100, so anything less than that is sort of a waste of pixels and space. Oh, and I recognize these pixel skeletons, Drageus: they’ve popped up in many mobile games, I really wish some different assets had been used. 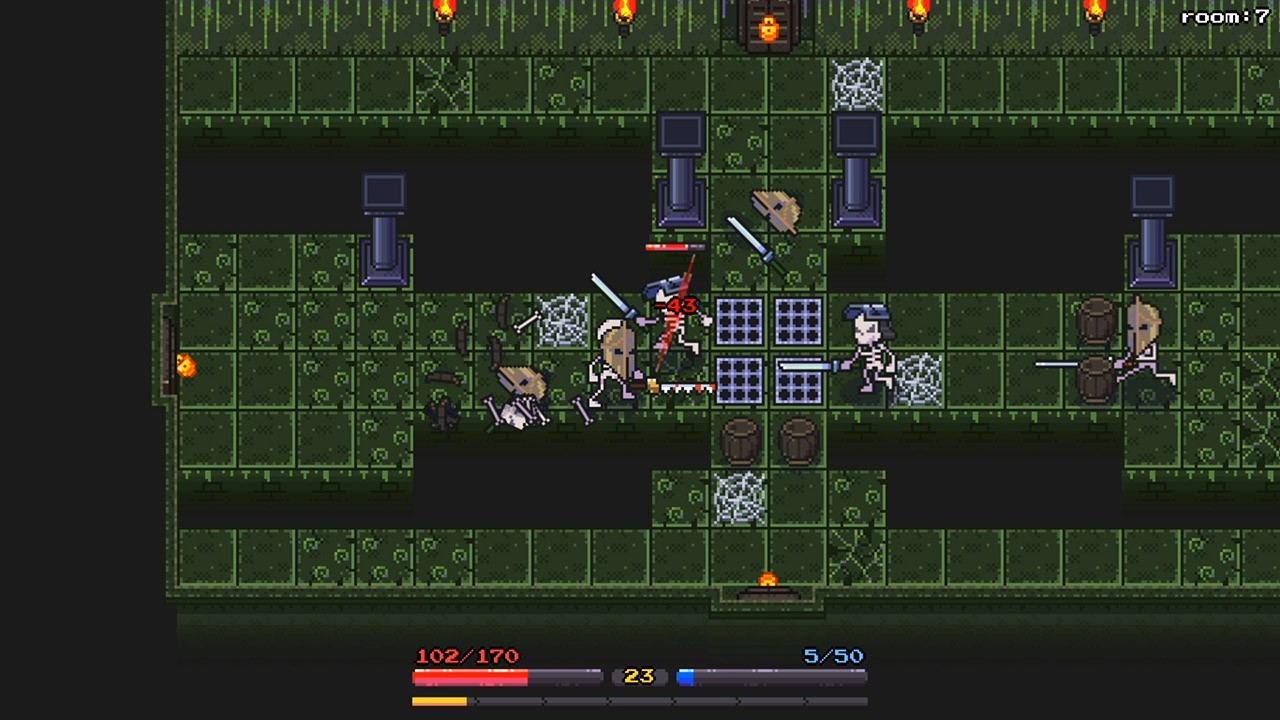 But it’s also pointless to worry about armor because Skull Rogue has a simply terrible approach to combat. The name of the game, for each and every room, is “create distance, swing sword, run when they get too close”. With spiderweb rooms, just watch for spawns on top of you and pick off skeletons at your leisure. With rooms with wide open spaces, get ready to Benny Hill your way to victory. If there’s a pit, try and see if you’ve improved your range enough to swipe across it: maybe you can avoid confrontation all together. The bombs are great but should only be used if you can create enough distance to drop the bomb and have it explode as the skeletons walk over it, otherwise it’s a waste of time. If a skeleton gets too close to you, you might only have a second to try and fix the situation before you’re totally screwed, because the AI DPS is insane. They lay down blows and fire much faster than you do, and there’s often more than one of them that create gangland execution in the blink of an eye. It’s worthless buffing HP or getting better armor because it often doesn’t create enough of a buffer to save you. Best to be naked and full of rage, so that you can die the same way I got expelled from high school.

When a game asks you to create your own replay value through minor increases in stats while running the same gamut endlessly, it just doesn’t generate enough fun to have long term viability. Maybe I’m cynical because there have been some truly great roguelites on the Switch, but Skull Rogue is too barebones (pun intended) to maintain any sort of interest. I don’t like thinking of a game whose target market are kids with a couple of bucks left on the eShop from another purchase and sort of shrug and say “it could be cool” while dropping the cash. Hopefully someone out there enjoys the very simple, repetitive music, the standard pixel graphics that are open source assets and some cyclic combat and enhancement. As for me, I don’t think I’ll be heading back to this dungeon any time soon.

Slapping “rogue” on a game’s description doesn’t absolve you of creating good gameplay or logical mechanics.