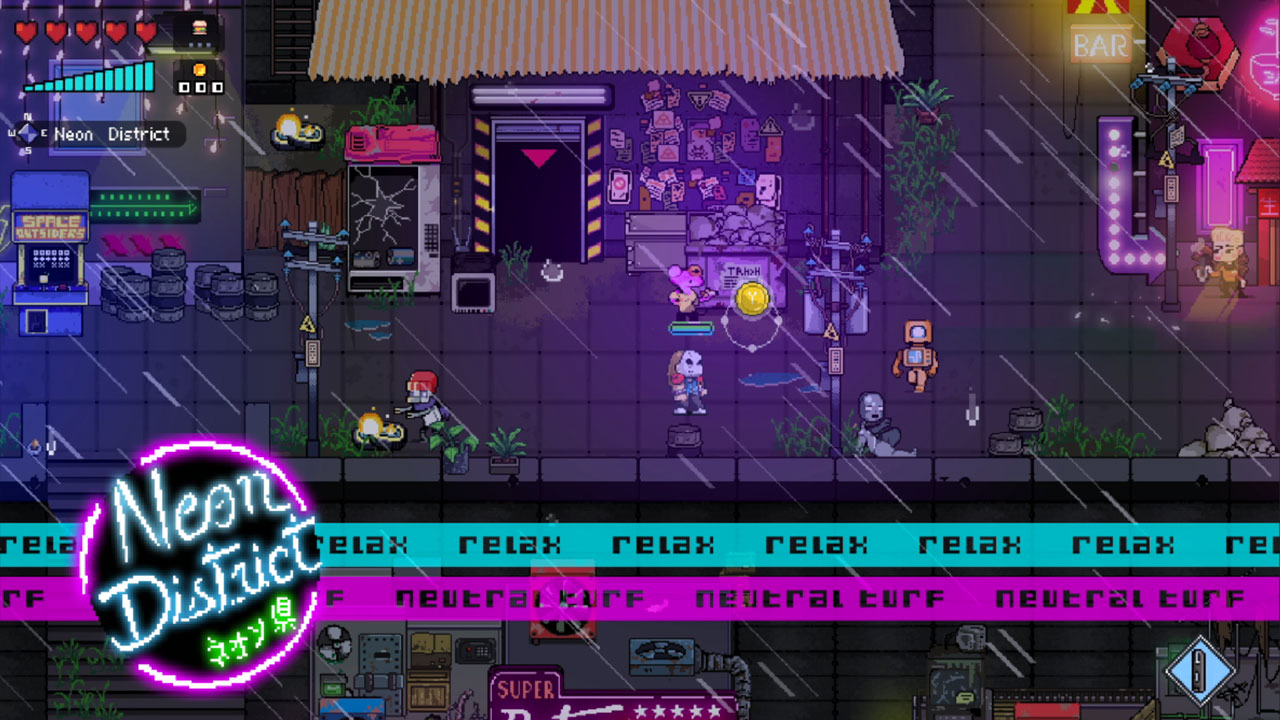 Capturing the spirit and essence of a real action adventure RPG is a difficult trick to pull off. In most people’s memories, the works of Link and his quests across Hyrule are pretty much the gold standard, but we can’t look to Nintendo to give us the only outlet for this particular type of game. Every so often, a development team comes along and delivers a great representation of the work. Oceanhorn, for example, is a bit more action and less RPG, but it represents the style and the aesthetic, and the execution of dungeons and puzzles is more than satisfying in delivery. So I understand that it isn’t an easy task to try and set out on your own and make the magic happen. Mecha Studio had a pretty clean and clear vision in mind when they created Neon City Riders, and I want to say that it succeeded on multiple levels. However, players should still beware: there’s a bit of a sour core to the whole presentation that can leave a bad taste in your mouth.

Neon City Riders takes place in a dark, post-apocalyptic landscape that is heavily laden with elements of cyberpunk and the neon-future ideology of the 80s. The land has been divided up by four gangs, each of which is at war with one another and constantly tearing apart the fabric of society and the innocent people. Rick is a mask-wearing hero whose motives begin shrouded in mystery, but whose objective is clear: he must defeat the four gang leaders. Thankfully, through a VR simulation, he is able to train and gain the abilities he needs to become a powerful weapon to strike down the forces that oppress and reign tyranny. At least, he had those powers until some unknown entity within the VR stripped them from his mind. Retaining nothing but his knowledge of swinging a pipe and the drive to stay alive, Rick sets out, in spite of being powerless, to fight for justice, sanity, and bringing the world back to a place of hopeful peace and safety. Also, you know he’s gonna get those powers back eventually, and probably with interest, so don’t worry too much about Rick.

With Neon City Riders, there’s an element of open ended approach that can be very exciting but initially overwhelming, which is how many people felt with the 8 bit adventures of yesteryear in times before those games were fully mapped out on GameFAQs and things like that. With just some general advice and direction, Rick sets out to find the turf of the very powerful gang leaders, invade their sanctums, strike them down and get on with making the world a better place. As he moves on, Rick will be asked to perform several fetch quests in order to unlock new areas and items. One of the first things is finding a donut to bribe a police officer so that you can access one gang turf. But the only person holding a donut is an android who would prefer not to give it up unless he gets something in exchange, and you can sort of see where it’s going. Rick has options, and he’s free to follow the path however it may lead. 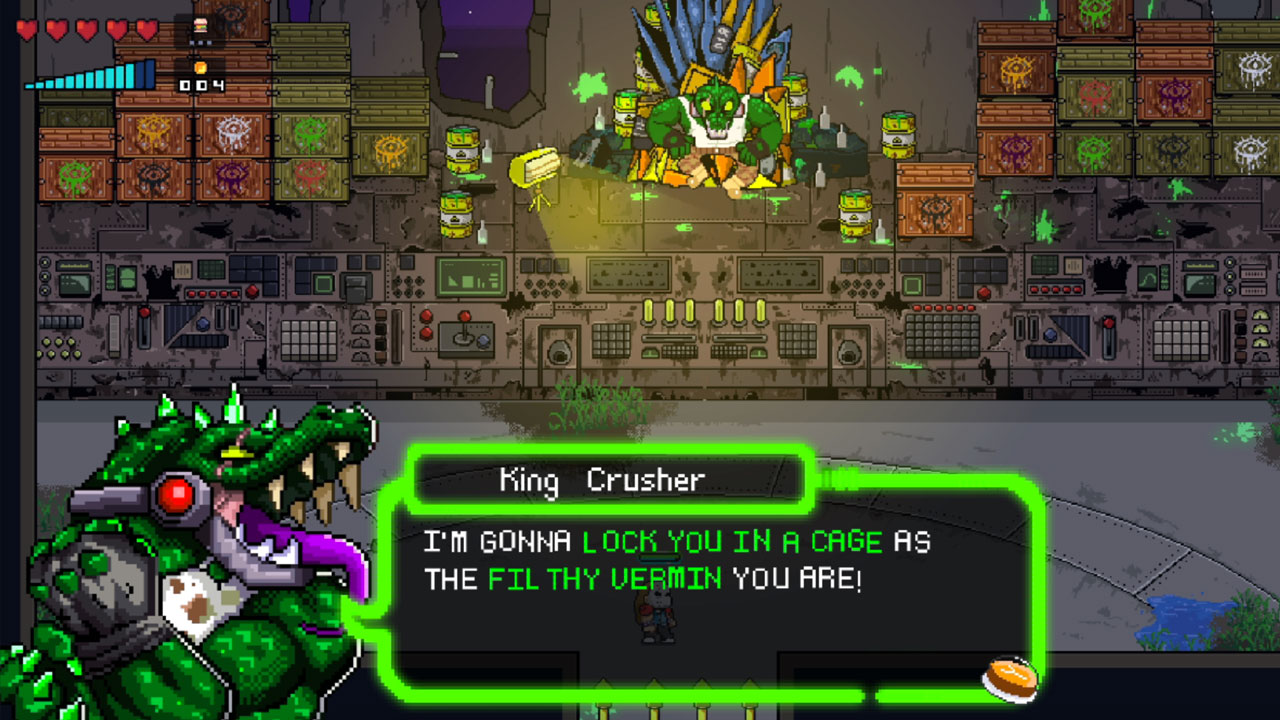 Combat for Neon City Riders is solid, but it really sort of jerks you around from the start, which is a major complaint I have with the game. When you’re doing the VR tutorial, you get a glimpse into all these dope things you should be able to do, like deflecting projectiles or dashing across danger zones. You spend this time, seriously, figuring out how to do these abilities and can’t finish the tutorial until you’re good enough at them to survive some smaller onslaughts. Then, as soon as the tutorial is done, you’re left with NOTHING and have to start again from square one. It’s a strange move, and I wonder if Mecha Studios thought it was funny or clever, but it just left me feeling resentful until I got all those abilities back, which takes quite a while. The enemies that you encounter in the meantime aren’t unbelievably awful, but they can come on you fast and furious and don’t wait their turn to smack the hell out of you, so expect to get ganged up on a lot before you remember how to sprint and give yourself some air.

In fact, be prepared to die a lot in Neon City Riders, because that’s the nature of this game. You start off with five health slots, you need to have five coins in order to buy a healing food item to stay alive, and you’ll definitely die several times before you manage to have enough pocket change to get a life saving slice of pizza.  Enemies have dynamic attack patterns that are predictable enough once you learn them, but can still overwhelm if more than a couple appear at once (which will absolutely happen). They respawn like crazy, so leaving a room isn’t the solution, and killing everything in the room only helps as long as you stay in said room. Plus the hazards of the world are perpetually terrible. Step too close to the water and you’re dead. Touch an electric current that you shouldn’t and you’re dead. Annoy the bees and don’t swat all of them as fast as you can and, surprise, you’re dead. I have no idea if there’s a penalty or reward for dying a lot or not dying enough, but goddamn did I die a lot. It was more than a kid could bear, and, frankly, it got monotonous. I tended to die a lot in the Raven territory, where, unfortunately, the soundtrack is at its least enjoyable in terms of repetition, which almost turned me off from the soundtrack entirely. Almost. 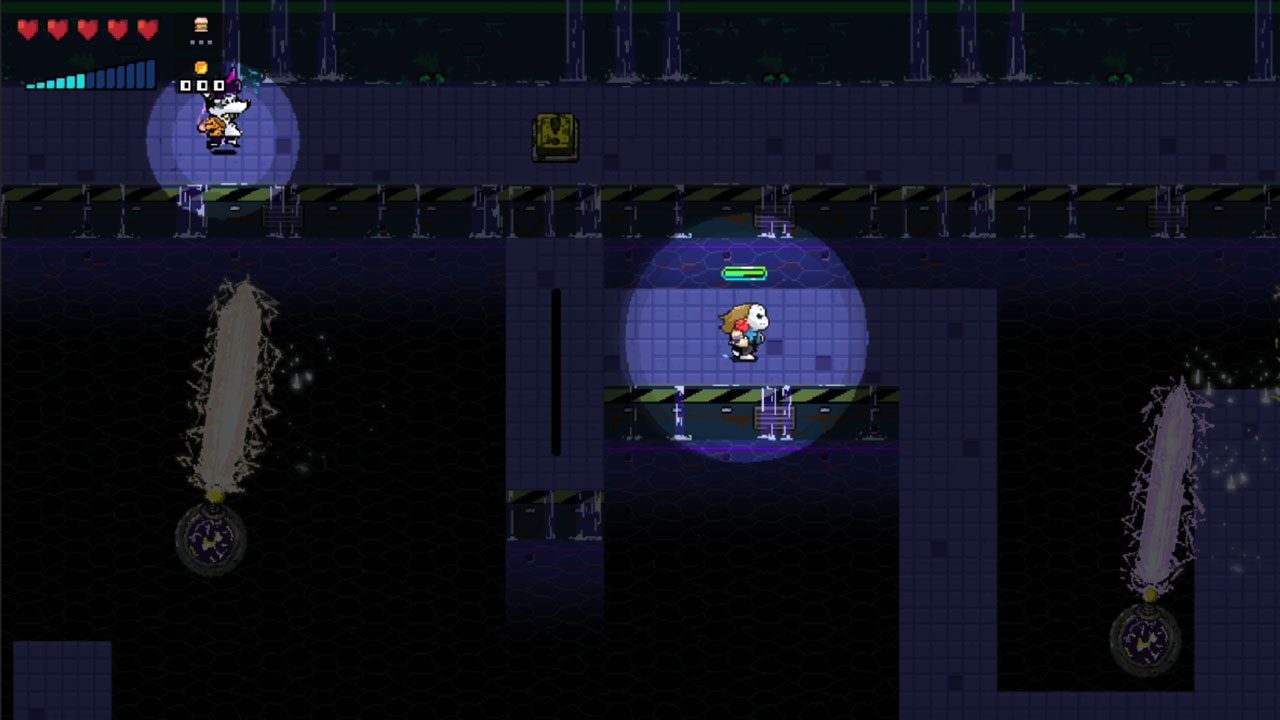 But there is a lot that Neon City Riders makes up for with presentation and style. The graphics are really great, and combine a modern cartoon shape and idea with the classic elements of grit, neon and despair that make a good cyberpunk story come to life. The gang turfs are varied, with different monsters and cronies inhabiting all walks of the land to give a diverse approach to the fray. Combat seriously does get better, and you feel stronger as you meet up with like minded NPCs that want to help you, plus getting back those coveted abilities (seriously, if I had dash from the drop my whole perspective would be different). The music is genuinely outrageous, with some of the beats from the Mutant Scale Brotherhood being my favorite, and I got back into the groove. Also, I paid attention during the cutscenes, which make the whole game for me.

One thing that separates cyberpunk written fiction from most games or movies is the ability to peer into the inner workings of the antagonists as well as the heroes. It’s one of the reasons that we will probably never see a Neuromancer movie: Wintermute is more complex than just a rogue AI that wants power. Each of the gang leaders has a backstory that amasses to so much more than just being a bad guy that dreams of sitting as king of a trash heap. There’s lost families, disappointment rage, tons of rationale and clear reasons that lead these wayward souls to find their violent tribes and discover a hierarchy that makes sense to them. We all like to puff out our chests and pretend that we can and will survive the apocalypse without sacrificing our humanity, but that simply isn’t true for so many of us. We modify our expectations and our ideas, and that’s what the Ravens or the Audiobats or the others did in order to survive and find a place in the world. Rick actually comes across as the bad guy for trying to disrupt this uneasy balance, and you sort of feel this growing sense of unease about your role in the game the further and further you move in. Seriously, there’s great writing here, and some of the surprises are, well, surprising.

For a moment, I forgot about the VR tutorial, and I loved this game. The pacing is good, the world is large without being too sprawling, and you can approach any locale the way you want and then double back later to find additional secrets and surprises. But then I remember that I wasted a good 20 minutes learning how to do things that I then couldn’t do for a couple hours or more, and I get ornery all over again. Neon City Riders is a really cool experience that’s well designed, visually and conceptually, but it does jerk you around a bit in terms of difficulty and punishment if you don’t have a fully stocked inventory of food at all times. I’m on the fence if it’s hard because hard is the flavor that best matches this dessert, or because Mecha Studios thinks hard automatically equates to good. I’ll give them the benefit of a doubt and sway towards the former, but I won’t forget that damn tutorial. Not for a second.

A fantastic, fiendishly difficult adventure that combines cartoonish design with dark, noir appeal, all bathed in the dirty starkness of neon lights.