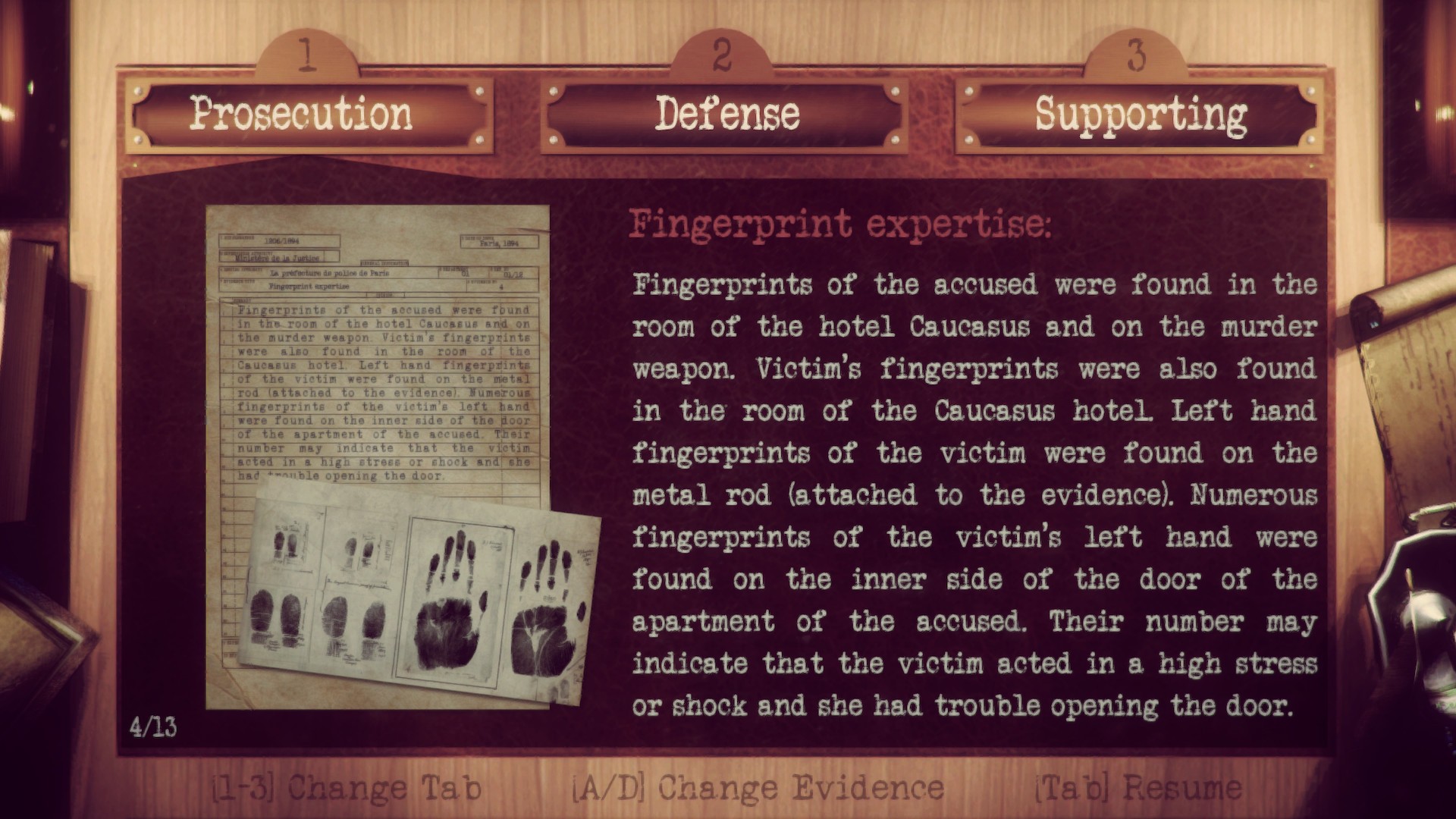 A murder mystery ‘whodunit’, Bohemian Killing tells the story of Alfred Ethon, who is the suspect of a cold-blooded murder in a hotel room in Paris, circa 1894. It’s an interesting one as the game starts with you allegedly committing the crime, so you reenact the events to get yourself off the hook.

At the very start of the game, you find yourself in a hallway brandishing a knife in first-person. A couple of tooltips pop up to advise that individual actions can cause the game to shift forward in time. Before you know it, you find a woman half-dressed on the floor at your mercy. The only option is the A button: kill her. It’s not the most welcoming of introductions, but there isn’t any other way about it. Cue titles.

The premise is to get away with murder. Playing as Alfred, you uncover evidence to counter the prosecution case against you and need to spin a counter-defence that prevents you from being imprisoned, or worse: decapitated by guillotine! As one of the very many help/loading screens state: you are not creating history; you are lying about what has already happened. 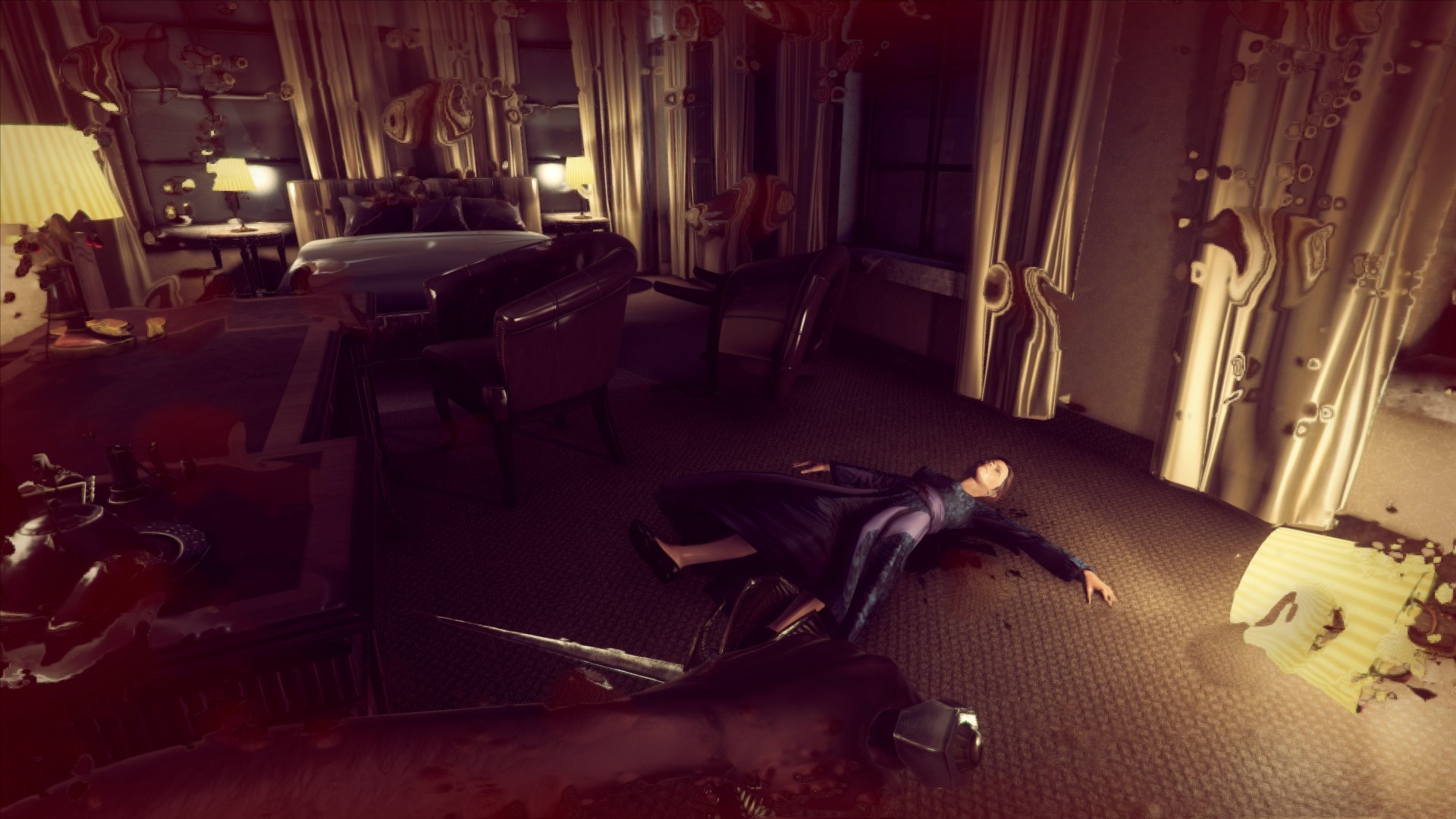 It’s a bit of a hard pill to swallow that you are the villain of the game and come up with all manners of excuses; you were drunk, having an alibi and even pleading insanity. It’s a very twisted concept, but strangely compelling. It’s like all those serial killer documentaries you watch. While you wouldn’t dream of hurting anyone, there’s something mysterious about the way a murderer works. Well, time to live that fantasy, you weirdo.

After the murderous introduction scene, we’re transported to present day (1894 still), and Alfred is behind bars in court. You are presented with the evidence against you in the form of various exhibits – from the knife that murdered the woman to newspaper clippings. Once you’ve been exposed to the evidence, you can bring up the items by pressing ZR, so you can start to build your defence to plead your innocence or spin a web of lies. The story then shifts back to the night in question, and you manually control your character by interacting with items and speaking to other characters.

You can’t change what’s already happened, but you can give a different take on it. For example, a witness spots your clothes bloodied, and it’s assumed it is the blood of the victim. However, starting the first ‘re-enactment’, I walked into a restaurant and was subsequently beaten due to racial prejudice, causing my clothes to be covered in blood. Each time you unlock new evidence, or a significant event happens, your surroundings go black and white, and the judge appears to question you, either acknowledging your recollection or raising some questions if you’re likely to be telling a lie.

This process continues as you investigate the area and pick up new items; the judge will appear and ask some questions. You don’t have any say over any of this as there are no dialogue choices. Instead, based on the path you take and the time you carry out the actions, you’ll unlock a new direction. Every now and then, you will get a notification that a significant event is about to happen. There’s the option to ask for a hint, or you can wing it yourself and see if you can come up with an approach on a particular scenario. For example, you are alleged to have booked a hotel room at a specific time. A notification will come up to advise you of this, and it’s up to you to either get to the hotel and book the room, coming up with reasoning why you did this, or ignore it entirely and do something else. Take the second option, and you’re likely to have your head removed. 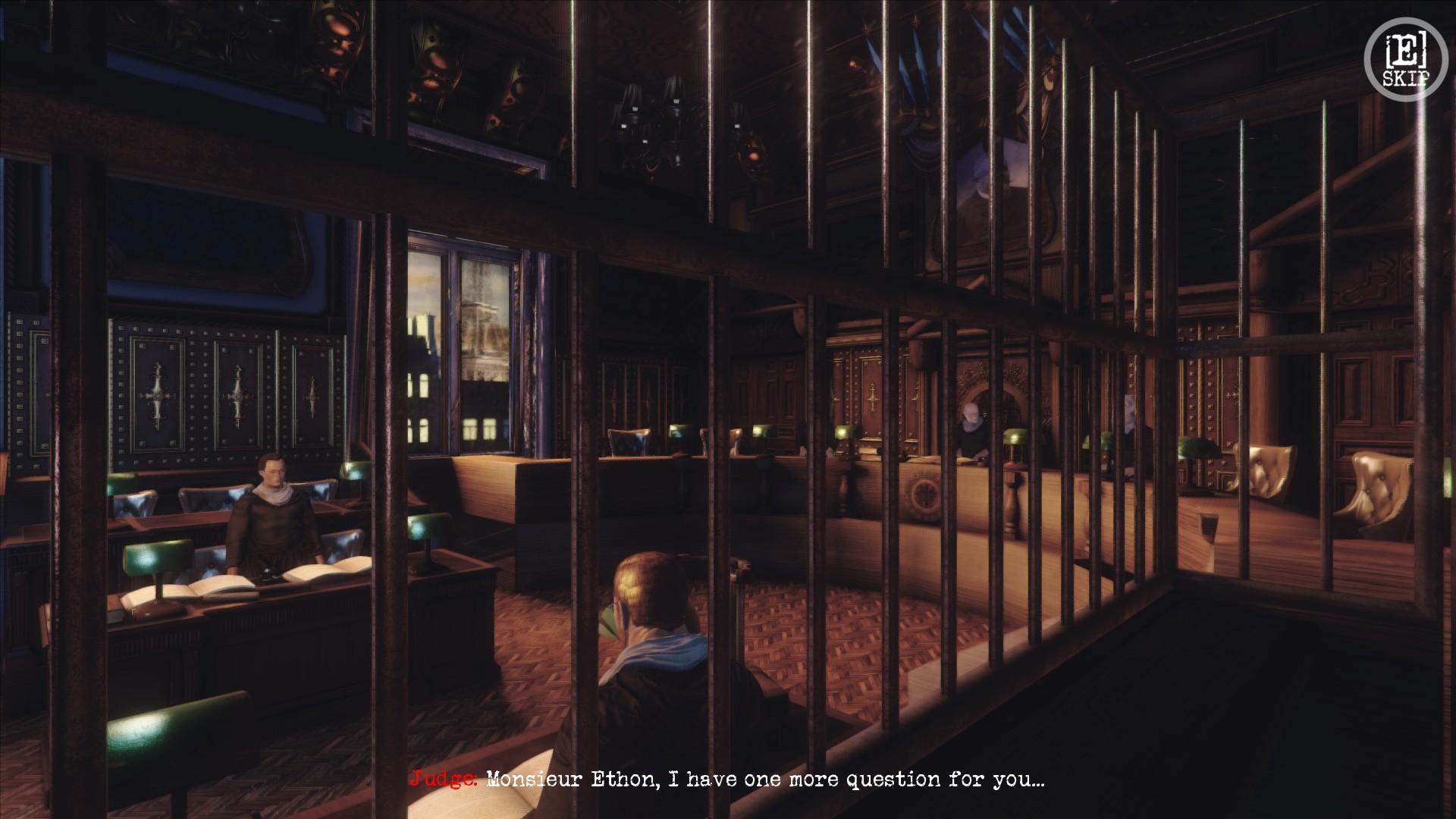 As you navigate the small playable area, Alfred narrates throughout “Then I opened the door”. “Later, I took the lift”. It’s quite engaging as he effectively recalls his experience to the judge and the spectators in court, but it’s also interesting for the player. However, there were a few repeated lines out of context. For example, I was leaving a room, and Alfred said “I entered Marie Capet’s room” which was wrong but didn’t want me to carry out a murder. Marie Capet is the victim here, but depending on how you play the game, the connotations change a little.

In Bohemian Killing, there are consequences for your actions, and there are multiple endings available. Not to be cocky, but on my first playthrough, I unlocked the first ending, which was my innocence. In the end, you are rewarded with a summary of how you played such as how much of the evidence you unlocked (11 out of 13), the judges confidence in you – mine was seven, but there was no measurable scale for this, the lies uncovered by the court – 0 woohoo! and then finally, confirmation that this was one of eight endings. However, after this summary screen, there was a very brief cutscene followed by newspaper clipping indicating this was one of nine endings. A little confusing, so to investigate further, I played through a few more times. Without a doubt, my first playthrough was the lucky one as other endings were quite bleak.

I can’t recall any other game that resembles Bohemian Killing. Not that I’m saying one doesn’t exist, but I don’t remember playing anything. Sure there are games where you have a Rashomon style of storytelling where there are multiple angles, but nothing springs to mind where you are the accused and reenact an event to prove your innocence/get yourself off the hook with an actual crime. The closest thing I can think of is Shadow of Memories – a game from the PlayStation 2 era which had multiple timelines but wasn’t a story about murder. For that reason alone, it’s a unique title that I found enjoyable.

The graphics are a little crude, and I wasn’t that impressed with them. Going with the re-enactment theme, they reminded me of the CG crime reconstructions that used to go viral (there used to be a famous one featuring Wayne Rooney). Granted, the graphics aren’t that bad, but they aren’t the best. The stand out part of Bohemian Killing is the multiple paths, yet no dialogue options. It’s quite a feat to be so engaging when it lacks a few multiple-choice options. For that reason, it is a little tricky to unlock all the endings as you more or less have to follow a strict procedure to achieve them. While it shouldn’t take too long to unlock at least four of them, you’ll probably look up a walkthrough to get the remainder. I haven’t done that, but I’m likely to at some stage just for that completionist false satisfaction.

Bohemian Killing is a genuinely unique whodunit title that has a good variety of paths that all stem from one specific event. The voice talent, while limited in number, is excellent, and I found myself engaged with the overall story. With multiple endings and a relatively quick completion time per playthrough, Bohemian Killing is a game you’re likely to repeat play. Still, your interest may drop after the third or fourth time as endings start becoming a little similar to one another.