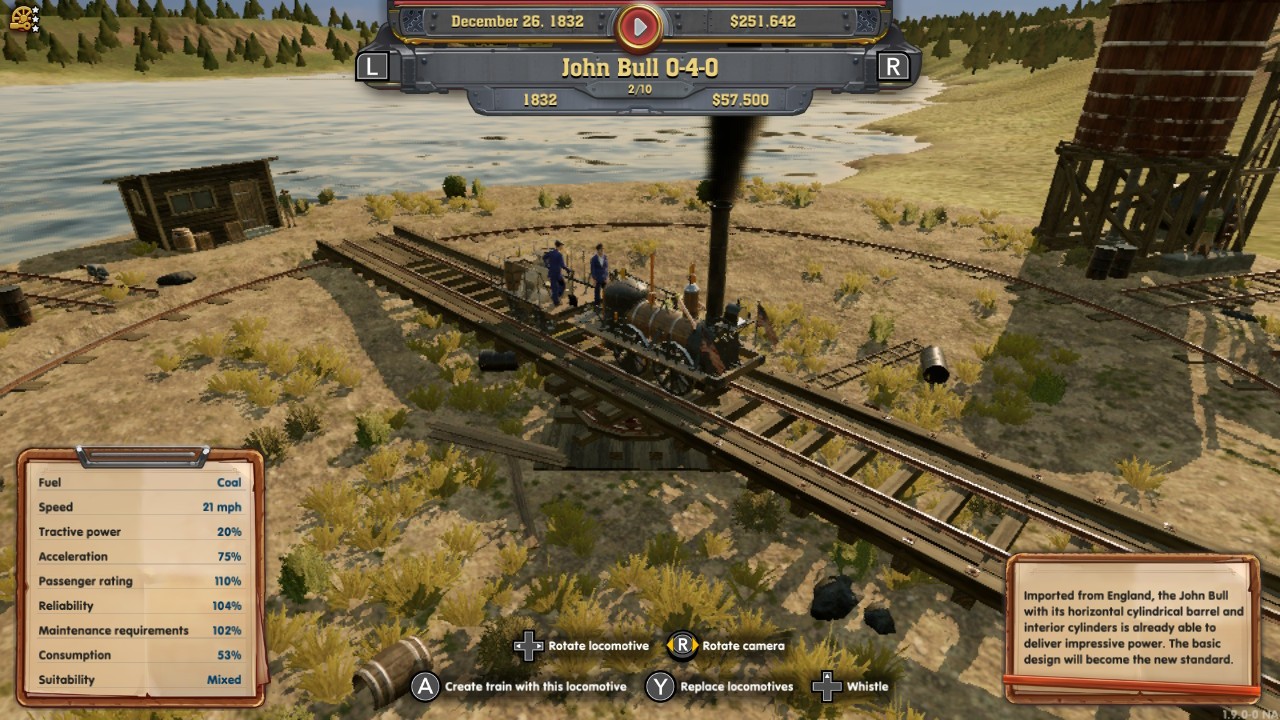 Since their conception, there’s always been a connection, or fascination between young boys and trains. However, I have to admit to have never being caught up within that same degree of intrigue; despite growing up next to a Victorian Railway Station and one that was actually used by Queen Victoria herself. The popularity of train sets lay testament to this connection; even transitioning over to adult life with grand layouts within the confines of grand attics. Despite not ever finding an appeal in trains though, I did always find a fascination in model villages and surprisingly, the miniature locomotives that used to run through them. It was for this reason that I decided to take a look at Railway Empire as it pulls into the platform of the Nintendo Switch.

Developed by Gaming Minds and published through Kalypso Media, this train and city building simulator takes place during the late nineteenth century, as it lays its tracks to create the foundations for the Trans-Continental Railroad that connected the great plains of the Wild West, from Omaha to Salt Lake City. The campaign covers five scenarios, with the first chapter acting as a tutorial that introduces you to the mechanics and control schemes needed to connect the East Coast to the West. Starting from the year 1863, you’ll connect Omaha to Norfolk before venturing farther afield, learning how to trade between cities, towns, farms and lumber yards, as well as setting up supply points, signals, maintenance sheds and create a series of parallel lines and junctions.

To provide an historical context, which I ‘m presuming is accurately depicted, each scenario is presented by a person of importance; often advising and guiding you on your objectives and how to complete them. Now, before I get into the nitty gritty of the gameplay, One thing I do have to touch on, is the complicated setup of how this tutorial presents itself. Being a port from the PC platform, the instructions given to you are either a) too brief, so as to miss some vital key inputs or order of execution or b) hasn’t been fully updated to cater for console controls. Whichever one it is, working through the tutorial soon becomes an exercise of trial and error before you begin to get to grips with how the game works. An example of this, is the game instructing me to build a station by selecting it through a series of menus, but doesn’t actually explain how to set it down, with button presses just simply playing a video; it was only when I cancelled the command that I was able to build. 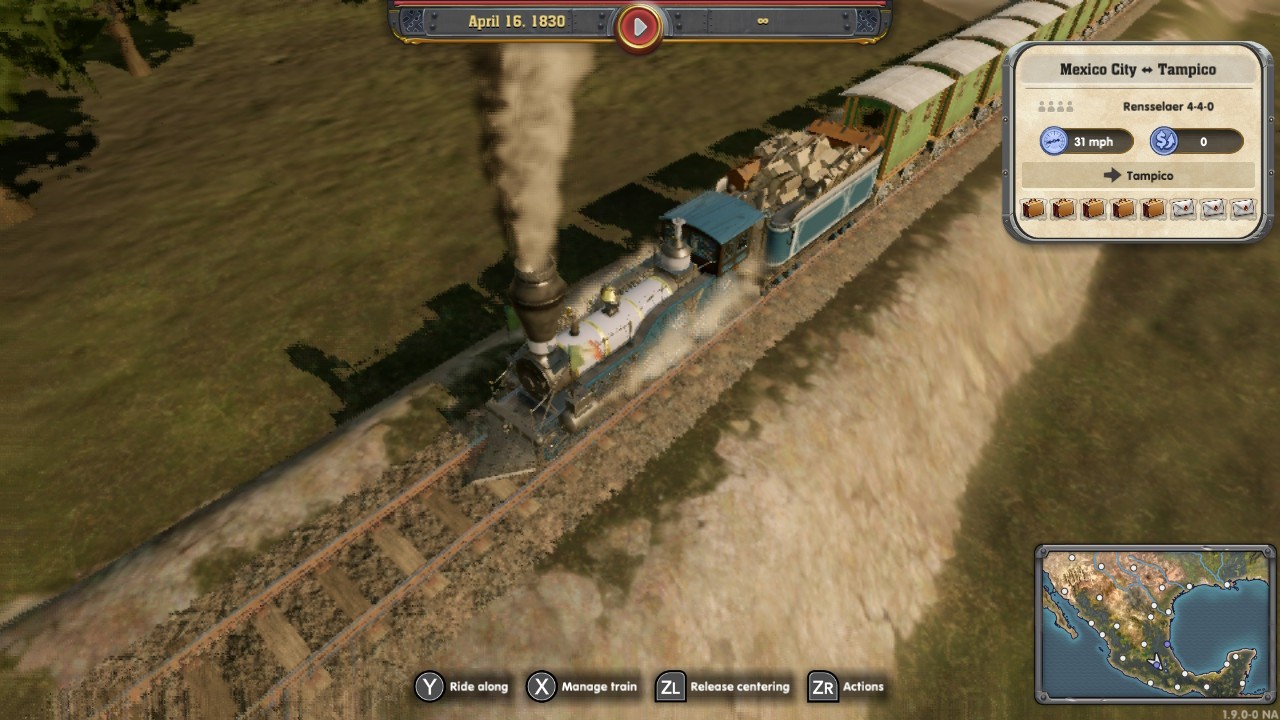 However, once you learn the mechanics of its style, the game soon become sublimely easy to get to grips with. In no time, you’ll be building expansive railways, placing a number of locomotives that run their respective routes, wait at signals to pass and deliver passengers and goods to a series of destinations. Be warned though, I  had to start and restart a total of five times before I began to pick up the control scheme properly. Anyway, Once you have learnt the controls, the game then presents you with a series of tasks that need to be fulfilled before opening up the next chapter of the campaign; often involving connecting locations, bringing a certain supply chain and ferrying a number of passengers before a time limit of several years runs out. Each of the campaign chapters can take anywhere from an hour to two, although this largely depends on how quickly you get to grasps with the game.

Progression brings more intricacies to the fold, such as competitors, auctions, tech trees and a refinement in trading. Running at a profit becomes important, as without it, you can’t build new stations, buy new locomotives or expand your network; something that obviously brings more profit, so balancing is crucial, as well as timing. The whole campaign eventually covers the whole of Central America, from Los Angeles to New York, as well as covering a variety of regions and timelines from the humble beginnings of the invention of the train, to the confederacy retreats of the Civil War. To build upon the game’s campaign, there are also a variety of other game modes that can be played, such as the Scenarios. Much like the campaign, these scenarios, a total of eleven within the base game, tasks you with a series of scenarios that develop the growth of the railroad, its connected cities and America as a whole. However, there’s far more detail and intricacy involved here, with some of the scenarios taking upwards of two or more hours to complete. These offer a wealth of long-term investments, especially when coupled with the main campaign, as well as Railway Empire’s other games modes and bundled DLC.

Free Mode and Sandbox are what they suggest; a veritable playground with which to build your very own creations, with all tech unlocked, no competitors and just you and the Wild West in which to build in. These modes are any model train enthusiasts dream, as you build expansive networks that easily mimic the fun and fascination that can be had from building your own rail network and run a series of trains upon them. In total, Railway Empire boasts an incredible forty locomotives, thirty wagons and over three-hundred technological advances. If that wasn’t enough, the game also comes bundled with the DLC expansions that run over campaigns, scenarios and free play. The expansions include Mexico, The Great Lakes and Crossing the Andes. The complete package offers a near infinite investment over its long term appeal, content and playtime; especially with the upcoming paid DLC that covers the European sector from the United Kingdom to Germany. 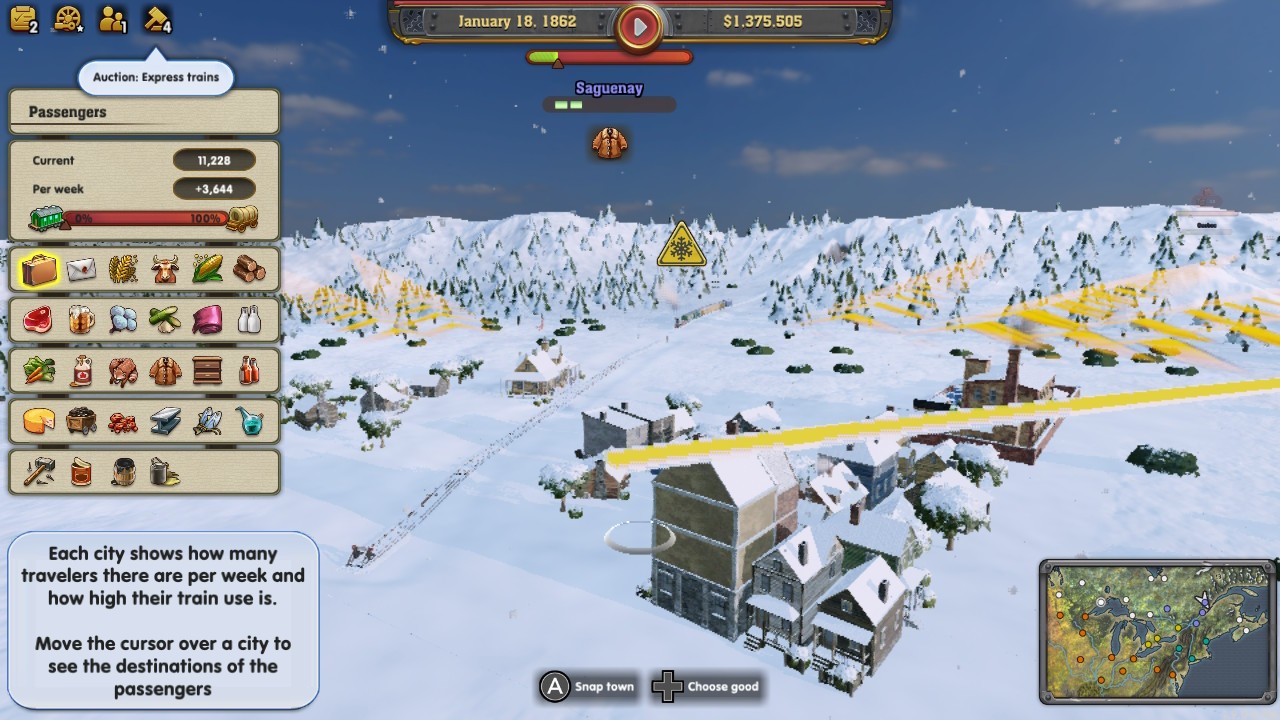 Despite a wealth of content and game modes though, the real beauty of this game lies in all of its mechanics and presentations. Even though I never found a fascination with trains as a young boy, I soon found myself embroiled within this steam-driven world. It totally caught me by surprise, awakening that inner child inside of me and gleefully presenting me with the biggest train set I could have ever hoped for. This is largely attributed to an impressive scale and level of detail. How Gaming Minds have managed to cram a highly detailed, living and breathing world onto the Switch is way beyond my level of understanding. Its landscape is truly impressive, with day, night and weather cycles, but also a host of refined detailing, such as the toot of pulling into the station, mixed with a squeak of the brakes, the toll of the bell and the chatter of people waiting on the platform. Then there’s the mechanical movement of the trains, the steam bellowing from the stacks and even the behaviour of the stars and stripes that proudly display from each train. It really is truly spectacular.

Although it can take a while to get to grips with the game, once you achieve this, the reward is thoroughly compelling. As you become more daring, you start to produce larger scaled networks, one’s that have four tracks running abreast, with impressive locomotives and a clickety-clack around the track. Switching between them with the shoulder buttons allows you to keep tabs on the whole network and then the ability to ride each of the trains is an absolute joy; crossing the highest of bridges over rivers and lakes or entering the longest of tunnels that run through mountains. There’s a real gleeful joy at seeing your creations come to life, cities and lines developing and just simply watching all of your locomotives go about their business. It really does hold the same appeal of building and watching your very own train set; all set within an epic scale.

Overall, Railway Empire presents one of the best train and city building sims to have ever been devised. Once you get to grips with its controls and mechanics, the game opens up to produce a sublime experience. Building tracks and stations, connecting cities and placing signals soon becomes a second nature; eventually building up to an impressive network of tracks and trains. This soon leads to a giddiness as you ride on trains, watch them all go about their business and expand and evolve across the plains the Wild West. It really does bring that inner child in all of us to the fore. The level of detail is simply astounding and how they’ve achieved this on the Switch is beyond me. It looks absolutely fantastic, plays beautifully and sounds wonderful. This game has now become my new guilty pleasure, as I build, develop and just simply watch my trains chug along the tracks and coming from someone that has never held any interest in such things, is the highest praise I could ever give.