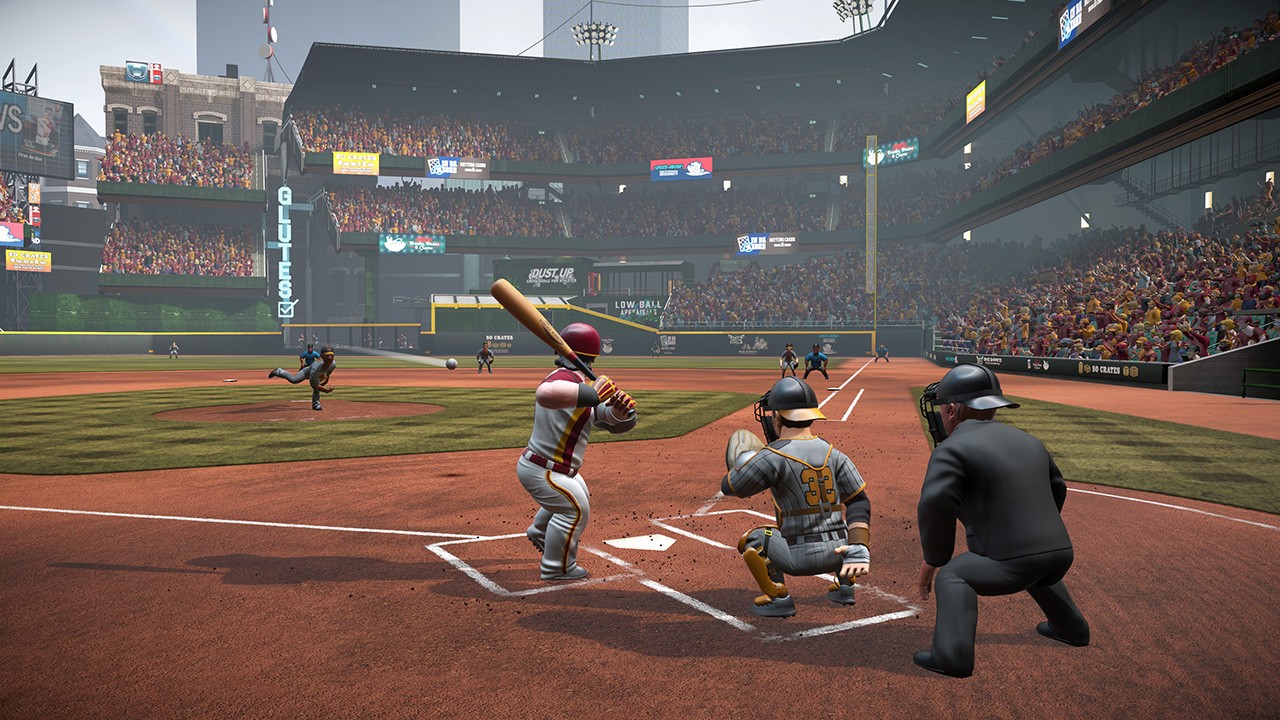 Outside of the PS4 and the incomparable quality of MLB: The Show, the Super Mega Baseball series has pretty much been the go to baseball game of this generation. Even on the PS4, despite the quality of The Show, if you were looking for something a little less hardcore and a touch more pick up and play, Super Mega Baseball was probably your game of choice. It might not have any actual licensing, but come on, what were you going to play, R.B.I Baseball? That game is the worst…wait, that’s wrong. Not ‘is’ the worst – ‘was’ the worst. Yup, R.B.I Baseball got its act together this year. It’s still far from perfect, but the series is starting to show signs of life, and with the full MLB license to boot, is suddenly looking like a much more appealing alternative. Oh, and did I mention that MLB: The Show is going multiplatform? Well, it is, and that means that Super Mega Baseball’s competition just went from slim to serious. The question is then, even without the official license, can Metalhead Software’s little baseball game that could still compete with the fully licensed likes of The Show and R.B.I. Baseball? The simple answer is, yes. Yes it can.

I’m sure it’s a pain in the butt for developers, but from a consumer perspective, there is nothing better than competition. Just look at Madden. Sure, it’s a good game, but that is a series that has been able to largely rest on its laurels since NFL2K went the way of the dodo. Competition drives innovation and quality unlike anything else, and the early signs suggest that the same will be true when it comes to baseball. Don’t get me wrong, Super Mega Baseball has always been great, but the team at Metalhead appear to have really pushed themselves this time around, subsequently elevating the quality of the entire package. This is still Super Mega Baseball as you know it, but with improvements across the board, this is a series with clear aspirations to move up from the minors to the majors.

The lack of licensing will always leave it ice skating up hill to a certain extent, but with some great editing options (you could probably create the entire MLB if you had the time / patience), and an imaginative selection of fictional teams, ball parks and players, the lack of the Yankees and the Red Sox doesn’t feel like as big an omission as it probably should. Some fans will invariably want to play with the real teams and players, but if you put gameplay and accessibility above realism, then Super Mega Baseball remains the best choice on the market. Sure, The Show is exceptional, and from a purely simulation perspective, remains in a league of its own, but if you’re looking for a game that mixes accessibility with depth and immediate thrills with longevity, then yeah, Super Mega Baseball 3 ticks just about every box. 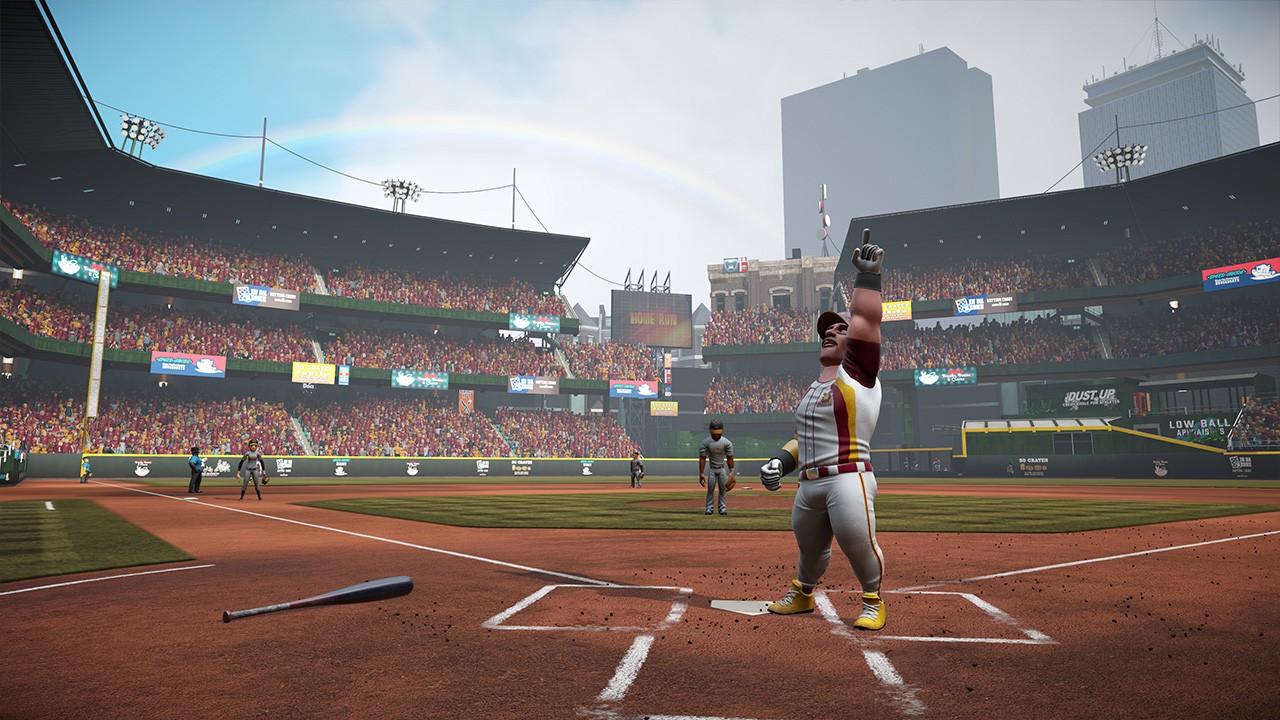 While the gameplay remains top tier and the content is more robust than ever, Super Mega Baseball still has one major issue (well it does for me anyway) – the art style. Technically this is a great looking game, and on the Switch, it really does look the business, but man, the character art, I hate it. I’ve always hated it. Don’t get me wrong, it’s just the characters – the stadiums look particularly great, but by god, those players are just the worst. It has been toned down since the first game, but I still can’t get on board with the cartoon-like design of the players. I understand that they need to be cartoonish to fall in-line with the tone of the game – I simply don’t like the design that they have gone for. This is a matter of personal taste of course, but I have never liked the character design in Super Mega Baseball, and with every other aspect of the game now looking better than ever, those ugly-ass players really do stand out.

Still, if you can see past the player design (something that admittedly became less and less of an issue as I played through the game), and you can live with the lack of genuine licenses, then honestly, Super Mega Baseball is legitimately fantastic in just about every other regard. The already brilliant gameplay has been refined, the new franchise mode is brilliant, and similar to the likes of Forza Horizon (I know, it’s a different genre), it manages to perfectly capture that middle ground between simulation and accessibility. There is enough depth and underlying complexity to keep the hardcore entertained, but the fundamentals and structure remain accessible enough that just about anyone can pick it up and play.

Those fundamentals remain largely unchanged (and still mostly fantastic), with that same sense of depth and accessibility combining to create a game that anyone can pick up on the lower difficulties, but thanks to a host of subtle, but smartly implemented mechanics and options, allows for seasoned players to go much deeper on the tactical side of the game. Given the visual style and that initial pick up and play mentality, it’s easy to tag Super Mega Baseball as more of an arcade-style experience, something closer to the R.B.I. Baseball, but dig below the surface, and Super Mega Baseball 3 delivers simulation levels of detail and depth. You don’t have to use them to enjoy the game, but if you plan on competing online or getting the best out of the games’ fantastic Franchise Mode, you’ll need to embrace the subtler and more tactical elements of team management, batting and pitching. 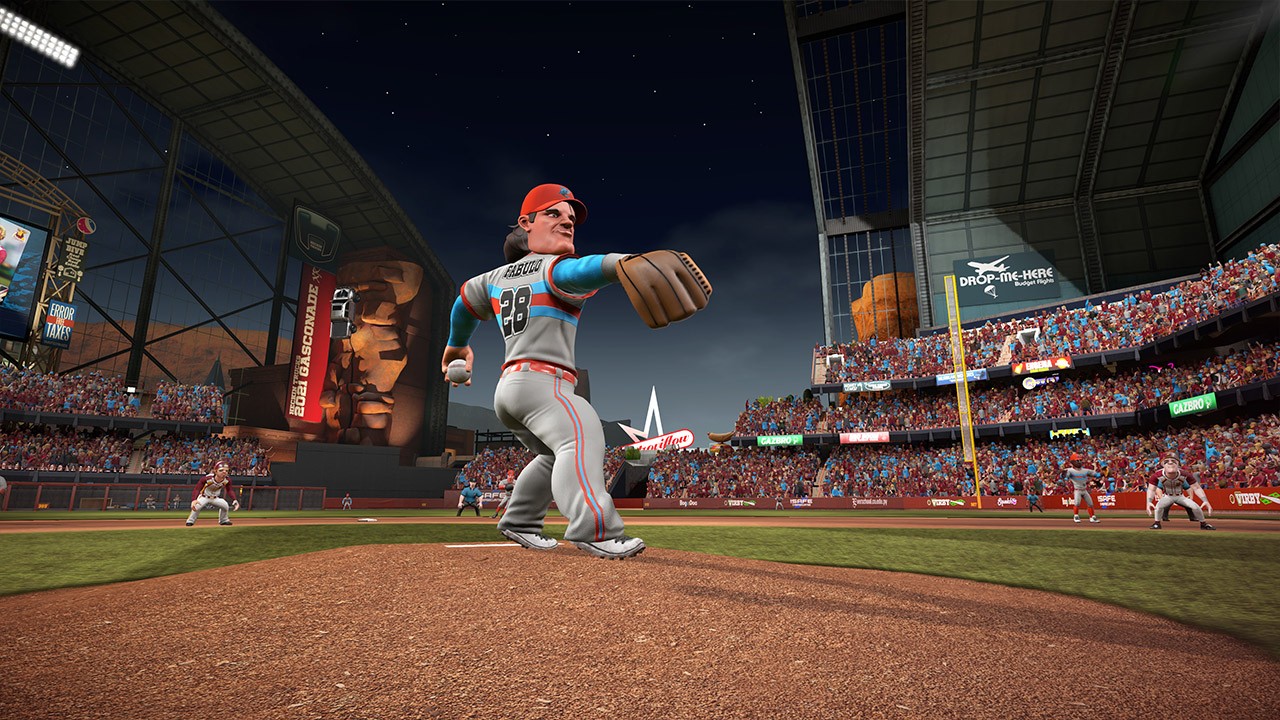 Speaking of the new Franchise Mode; that really is a game changer. Alongside standard seasons, solid online options and pennant races, the addition of a fully-fledged and utterly addictive Franchise mode, really does put Super Mega Baseball 3 up there in the triple A category when it comes to content, and with the gameplay to back it up, suddenly feels like a genuine competitor to the previously unmatched, MLB: The Show. Whether it’s quite there in terms of overall quality is up for debate, but with R.B.I. Baseball finally getting its game together this year, it has, at the very least, managed to keep its nose ahead of its more traditional competition.

With tons of new content, fantastically balanced gameplay and improved visuals, Metalhead Software’s, Super Mega Baseball 3 represents the finest entry in the series by some distance. The increased asking price might irk some, but given the amount of depth, content and polish on display, it remains a reasonable cost for what is starting to feel like a genuine triple A sports series. The art design will remain an issue for some (I’m still not particularly keen on the look of the players), but from a technical perspective, this is top tier stuff, and on Switch in particular, looks genuinely impressive. With three baseball games now competing for our attention, things have rarely looked so good for fans of the sport, and with Super Mega Baseball leading the charge, the future finally looks bright regardless of your console of choice.

With tons of new content, fantastically balanced gameplay and improved visuals, Metalhead Software’s, Super Mega Baseball 3 represents the finest entry in the series by some distance.