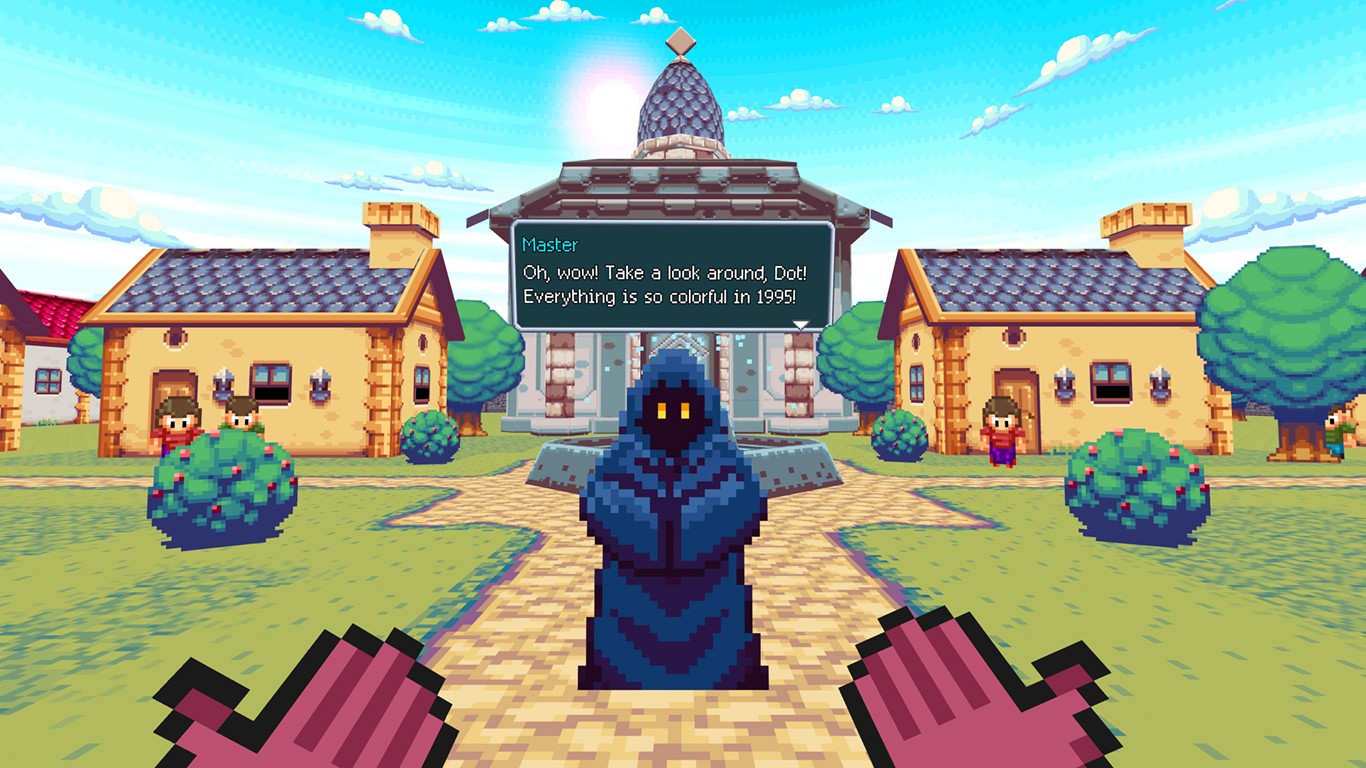 With a plethora of new VR titles falling over themselves to predict the near and distant future either as a post-apocalyptic wasteland, or a dystopian steam punk sci-fi reality (or in some cases a mix of both) it’s refreshing to spend time with ARVORE’s latest offering,  Pixel Ripped 1995. Following hard on the heels of their highly acclaimed 2018 outing, Pixel Ripped 1989, this latest title has all of the features that made the first game a surprise hit.  Retaining its game-within-a-game setting, Pixel Ripped 1995 is a beautifully crafted VR love letter to games gone by.  We’re talking a time when ‘internet’ was something you got at the hairdressers and arcade machines were a staple diet for most of the gaming world. In Pixel Ripped 1995 ARVORE gives us the opportunity to relive those halcyon days from the perspective of a David, a nine year old kid. While sitting in front of a giant size CRT screen (remember those?) you get to sample pretty much every genre of retro gaming as David controls a character called Dot who wages a one woman battle against the evil Cyblin Lord.

The first and most obvious thing you’ll notice when playing Pixel Ripped 1995 is that the level of immersion is breath taking. Within a few minutes of seeing the world through David’s eye’s I was completely and totally sold on the feeling that I was in fact 9 years old again. And the first time David’s mum walked into the room, I literally jumped as my confused brain told me a real-life giant had walked into my house. It’s pretty hard to curse and laugh at the same time but at that moment, I’m pretty sure I managed it. 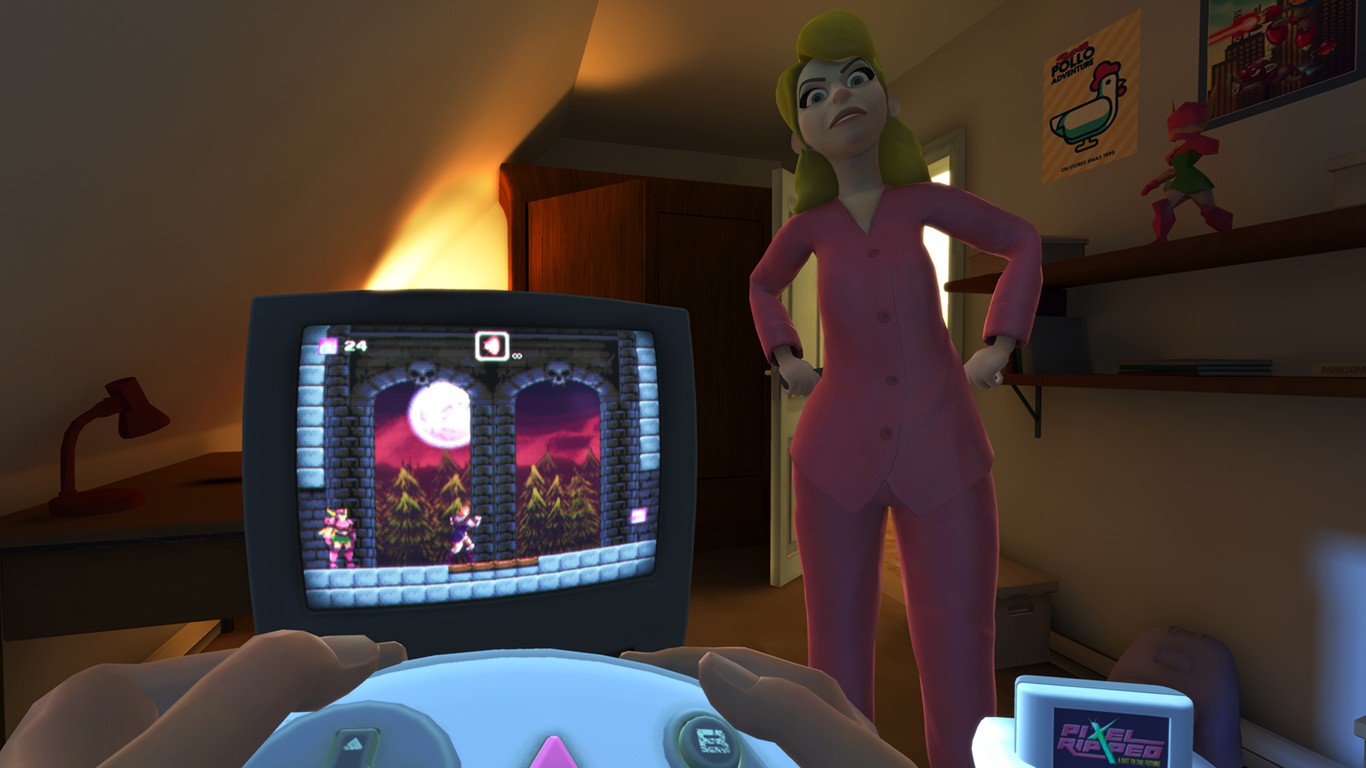 Over the course of some five to six hours of game play you’ll be playing everything from 2D side scrolling beat ‘em ups to Zelda-like exploration and combat titles and everything else in between. And as the games continues on your giant size TV, you’ll occasionally have to distract your mum with your real world water pistol by shooting objects around the house. Fail to do this and she’ll pull the plug on your game and you’ll have to start the level again from your last save point.

Because there are so many genres packed into Pixel Ripped 1995, you’ll often find that, just as you’re getting used to a particular game, it finishes and you’re thrown into a new adventure with a new type of game play. Perhaps it’s the nostalgia talking, but I’d loved to have been able to revisit some of the games, crank the difficulty up and just keep playing them against the leader board. But that would probably change the unique nature of Pixel Ripped 1995 as the game styles itself as a homage to games gone by and, in doing this, it tries very hard to give us a balanced portion of each genre. While playing through Pixel Ripped 1995 I tried to make a mental list of every game it seemed to tip its hat to. Once I got past nine I quickly lost interest and focused on the game at hand. Suffice to say, if you remember titles like Streets of Rage, The Legend of Zelda: Majora’s Mask and Super Metroid, you’ll be in for a treat. 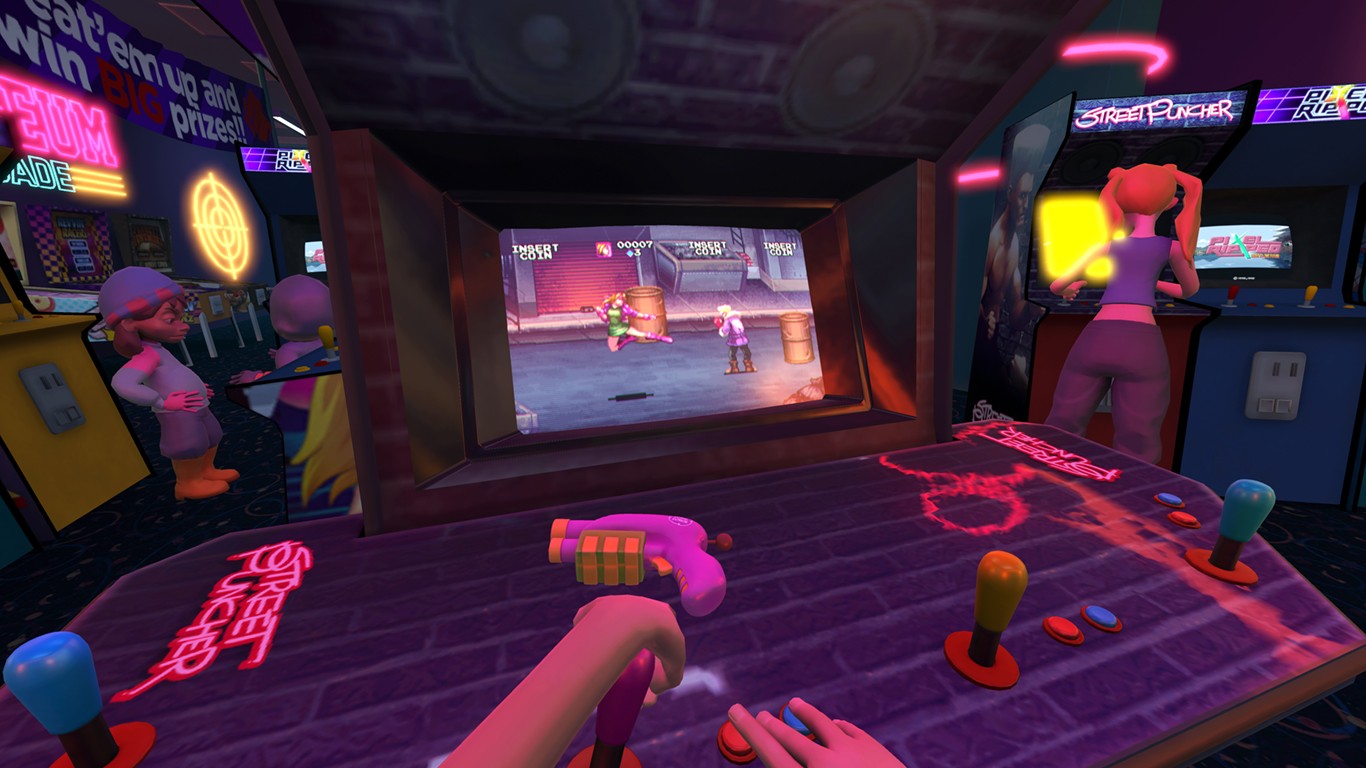 Graphically, Pixel Ripped 1995 is not a prom queen. The character animations are far from perfect and, although the game has a kid-friendly cartoon look about it, you get the feeling that a little more time could have been spent polishing up the visuals. However, the games audio department more than makes up for this. Pixel Ripped 1995 has some of the best character voice acting that we’ve heard in a long time. It’s a shame that some of the characters (and I’m thinking of David’s mum here) has such a limited script that they begin to loop fairly quickly. These are however minor quibbles that will do little to detract from your overall enjoyment of the game.

As far as comfort goes, Pixel Ripped 1995 is a perfect introduction for VR newbies. As you spend most of the in-game time sitting down and staring at the screen there’s zero chance of vertigo or motion sickness. And even when the game bursts out of the screen and invades your ‘real’ world its presented in a way that you remain stationary and avoid having to teleport or rotate. Excellent. With so many retro gaming types packed into Pixel Ripped 1995, it’s difficult to imagine a title that offers more variety or sheer nostalgic magic. Highly recommended.

Pixel Ripped 1995 is a perfect introduction for VR newbies.  As you spend most of the in-game time sitting down and staring at the screen there’s zero chance of vertigo or motion sickness.