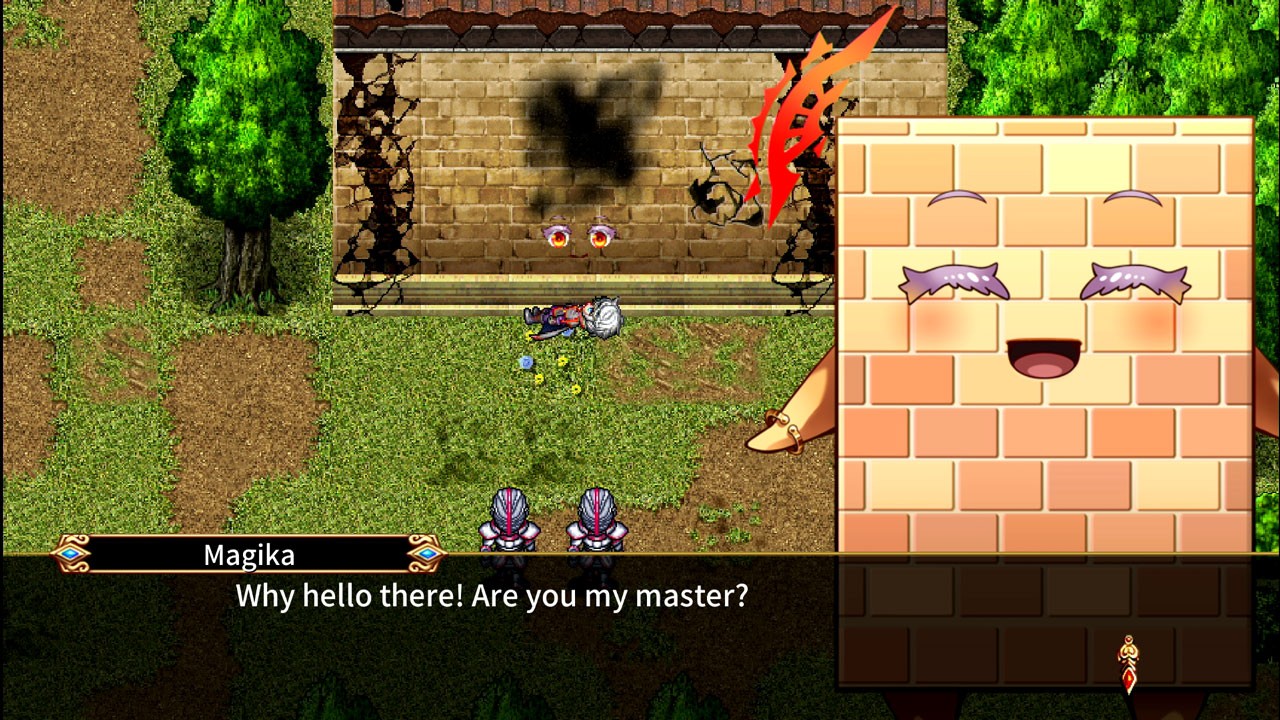 From the JRPG powerhouse Kemco, Miden Tower has made a fresh release from mobile onto the Nintendo Switch. The plot is simple: Since mages cut off connections to the outside world, they created Miden Tower to hide away to avoid their powers being used for violence. Ever since the mages disappeared, the imperial army has been desperately searching for the tower so they can wipe them out, despite their wish to live in peace. Valen, the protagonist of this story, is on a quest for revenge against the imperial army who wiped out his childhood village. The story begins at the critical point where the mages are pushed towards the upper floors, and they’re starting to fight back.

It is an interesting story, with some sub-tones of questioning morality. While these sub-tones could be explored a little more, they serve well in the narrative. It is clear that main and side characters alike have had a good deal of thought placed into their designs, evident in their distinctive looks and personalities. However, Valen may be a bit too edgy as he gets annoying and boring with his constant thirst for blood. At least the rest of the party have loveable tropes to lighten the mood and mix it up. Mixing seriousness with fun, of course, there are some humorous moments sprinkled in, lessening the tension. Reading the text, a lot of personality floods through. Where the odd line can be a bit wordy and hard to read, overall it is a great effort. There is also a nice touch of adding skills popping up at the top, such as when a metal wash basin drops from the ceiling a skill ‘basin dropping’ appears at the top, to further add to the comedic display on the screen. 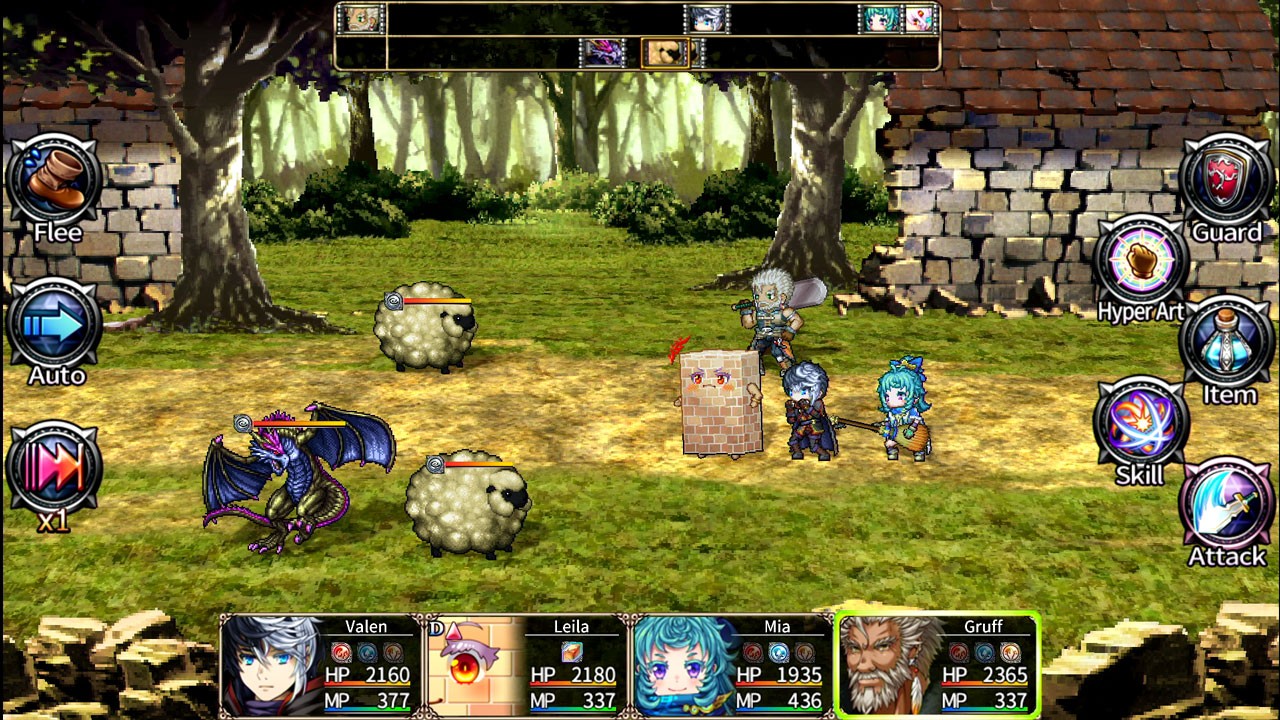 Visually, I must confess, the title screen filled me with dread the first time I opened it up. It is reminiscent of those basic web flash games from the early 00s you could play online and in current standards look horrendous. However, it was a pleasant surprise when the game starts as the visual quality massively improves. Tower Midel goes for a pixel art style, which is upscaled incredibly well to a full tv screen size, causing those memories of the poor title screen to fade away. Clearly inspired by the classic SNES JRPGs, such as Trials of Mana, Dragon Quest series, Final Fantasy series, etc., the visual looks more of an upgrade than following suit. Within the background are a myriad of little details to piqué your interest and encourage your eyes to look around the screen. Notably, a cool little feature on top of the walls are little cracks to show hidden corridors leading to otherwise inaccessible places on the map, creating more exploration opportunities. As previously mentioned, character sprites are also great, slightly larger compared to other JRPGs to allow for some detail to be placed on them. My only real fault with the sprites is the walking animation for the party is extremely slow, being really at odds with the movement speed. Furthermore, only 6 characters, 4 that make up the main party and 2 villains, have a full portrait design. These appear when they speak, following an anime design. While Mia’s is slightly too busy, the rest have nice and interesting designs, although there isn’t much emotion in them which is a shame.

Also, in the vein of classic JRPGs, Tower Miden has a random encounter mechanic for coming across enemies. Interestingly, there is a mechanic to increase the encounter rate of monsters and such to help grind for battles. Personally, I did not find much of a use for it as the characters level up quite quickly through nature exploring. Valen starts the game at level 20, which is pretty strange, although strengthening up skills requires repeatedly using them in battle, so it balances out in that way. Combat itself has an intricate system, both sides feature a grid in a system similar to Yo-Kai Watch 3, which is accompanied by a visual change. The 2-D screen changes to be a 3-D arena but the characters keep their 2-D form, making it like Octopath Traveller. It is an interesting choice, and it really pays off as a way to help players discern where characters are on each grid. Sure, once you select a skill 2-D grid appears with icons to show you, but it helps when thinking between turns about what skill to use next. A lot of effort went into the visuals and it has really paid off because it looks fantastic. My only real complaint in the visual department is it is hard to see which option you are floating over when choosing your action. The buttons with the general choices only light up in a very faint pink at the outer edge. This is most likely due to the fact that the original release was on mobile, meaning this would have been touch screen. I tried it handheld to see if the Switch port had them too, unfortunately, this is not the case. This is a shame, as that would be one way to overcome it. 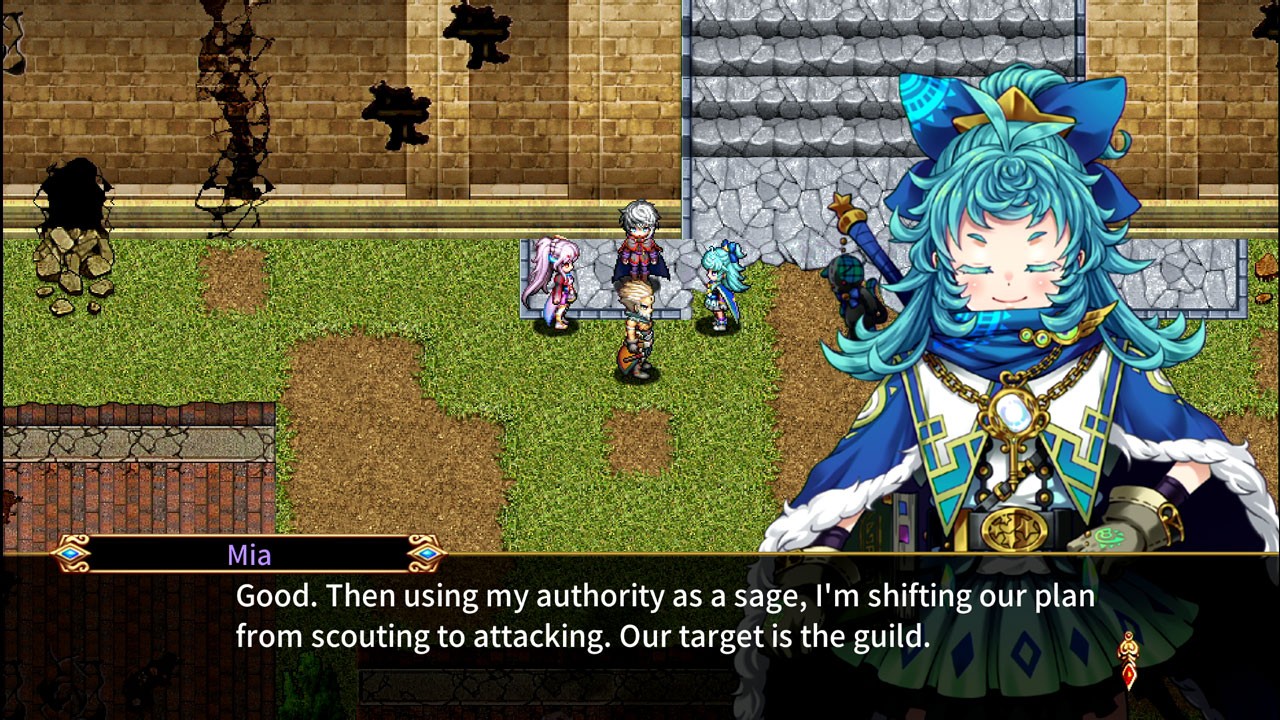 As for the actual mechanics, party placement on the grid is done outside of battle in the pause menu. It is critical to think about where each party member is placed. When closer to the enemy, your character has less defence but more attack, and the reverse when placed at the back. The combat system is turn-based, with a bar at the top of the battle screen with icons of allies and enemies alike to show who is going to attack next. Once it is your turn you have the usual choices of attack, skills, items, etc as you would expect. Skills, as you may already have guessed, have different ranges of who it will hit on the grid. This applies to both attacking and support skills, which are further split into physical and magic. Both need MP to be used, making it more about the resistance the enemy may have to physical and elements more than anything. Whilst each party member has an assigned element at the start, it is possible to find scrolls to teach characters an extra elemental to start a new skill path. The final feature used in battle is the Hyper Skill. Essentially this is a special attack that can be used once every 20 moves, which can very easily turn the tide of a battle.

Finally, the music. Individually the tracks are great, vibrant, and full of energy, doing a lot to build the atmosphere by complimenting the visuals extremely well. However, the transitions between tracks are poor and almost non-existent, so as a track ends and a new one instantly starts. It blares through, making you jump and does spoils the game as it gets extremely infuriating. The worst instance of this is when opening a treasure chest, the jingle plays distorting loud and a few times made me jump so much I pressed a before reading what I got. It is a shame as it spoils the soundtrack, which clearly had a lot of effort behind it. At least other sound effects, particularly in battle, manage to balance well with the music. Hopefully, this is something that gets sorted in a patch, we can pray.

All in all, if you love classic JRPGs, Miden Tower will be up your street. Bringing the 16-bit visual style to the modern-day with a 3-D change to highlight the grid mechanics of battle it is a pleasure to look at. Not only that, but the grid is also designed with tactics in mind to encourage tactical play throughout. Add this with an interesting story it manages to deliver. It is a shame the great soundtrack is ruined by poor transitions. Still don’t be fooled by the low-quality title-screen, this is a great game!