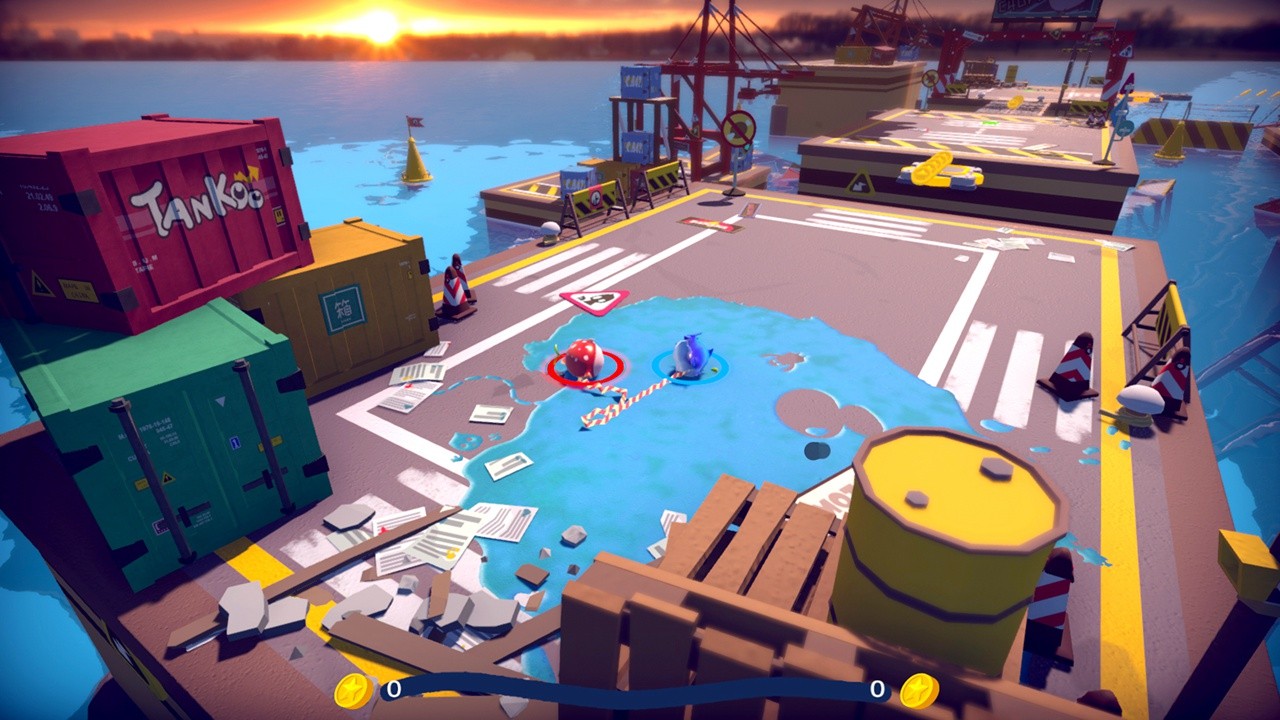 As lockdown and social distancing continues, video games that can be played with others in our household have been heavily sought after to mix it up and make the most of our new home life. Never Breakup is one such game, having a drive on Co-op play like games such as Overcooked, Moving Out, and so forth. Having a more puzzle platformer drive, makes it a cross of these games and another Co-op playing game Brothers: Tale of Two Sons. Although Never Breakup will test bonds of the players as you are tied together whilst you navigate the levels together. Still, is it worth the tension and arguments? Or would you be better off grabbing a Monopoly out of the cupboard? Let’s find out.

For the main campaign, the aim of each level is to reach the goal at the end. Despite the Co-op focus, there is a choice of playing it solo which has the downside of making it a bit slower as some parts require changing between the two characters, but there is the option to move both at the same time to help speed up certain parts, and also help with some platforming. Overall, the beauty of the mechanics is their simplicity. Of course, as you’d expect from any platformers there are precise jumping sections, moving crates to jump up to higher places, and all the standard things you come across in this genre of game. The rope feature acts as a way to add more depth to it, adding extras such as one character can freeze in place acting as a safety rope whilst the other jumps across a platform. At this point, you can reel the rope in to either save them from falling down to the depths, or even bring a crate up they are holding. Not only that, it adds an extra challenge to parts involving switches as at times one character needs to stay on the switch whilst another goes through, making you work with limited space. 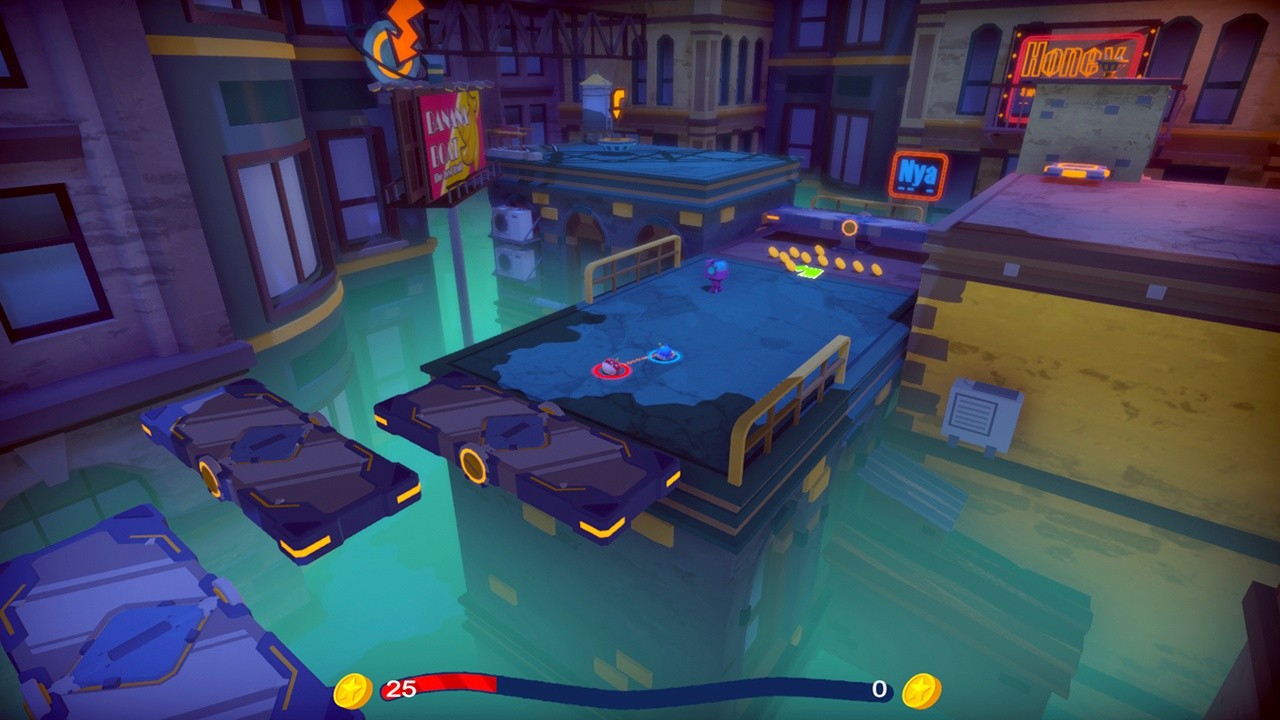 Never Breakup encourages the player to pay close attention to their surroundings, which isn’t something I expected going in. If anything, the rope mechanics can be too good at times, such as when I was trying to jump up from a crate, but the rope got stuck precisely behind me on the aforementioned crate and limited my jump. Safe to say, it was as impressive as it is annoying. The last real gameplay mechanic is the ability to eat and spit out the other character, primarily used to defeat enemies and just feels a bit unnecessary and there for the sake of it. Although it has its uses for pushing crates which should have been the focus of it. Still Never Breakup provides a refreshing take on the basic platforming ideas with the rope, making the mechanics pretty solid on that front.

Beyond the main campaign, there are some mini-games you can play, although it can only be done with 2 or 4 players exactly. These are unlocked by finding the hidden meal bowls in each level, which are quite easy to find by keeping an eye out for extra paths or for shadows as you go. Strangely, these mini-games are more battle style, feeling more like Mario Party mini-games that seem out of place compared to the Co-op nature of the main game. Still, they either have the aim of collecting the most fruit or fighting each other as the main 2 choices. It is a shame there are no CPU options to allow you to play these on your own or even on the same team when playing with a friend. Worse than that, to unlock extra avatar parts you have to play each mini-game 50 times, which is way too high and is more of a chore than anything else. Still, there is another collectable in each level, which is the coins. These coins are used in a gatcha machine to unlock new parts to customise the avatars. In all honesty, it isn’t particularly interesting and feels like it should unlock new characters. It is a shame both of these features fail to impress. 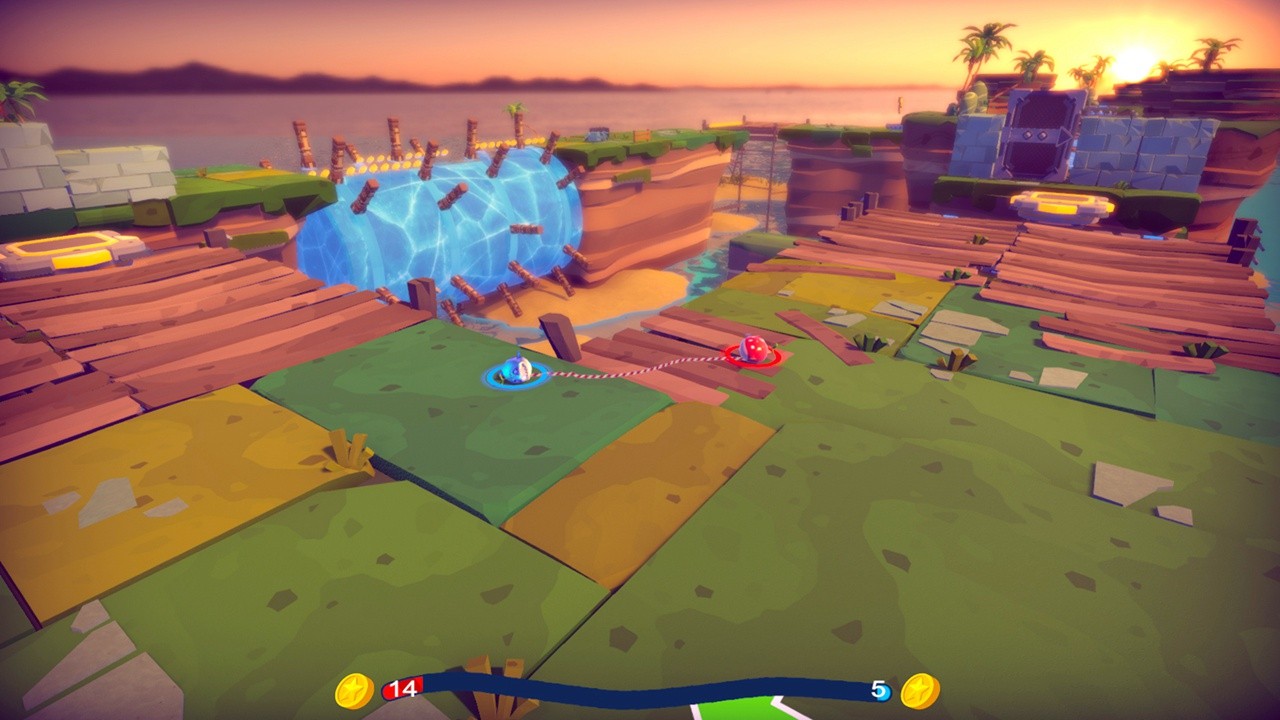 The main campaign is spilt into 6 worlds, each having a different aesthetic to help further spice up the platforming elements by having features suiting the environment. Visually, the environment has a more cartoony style, similar to the previously mentioned Overcooked and Moving Out games, that looks great with the soft colour palette. Character designs on the other hand, look a bit out of place and lack consistency, making them stick out a bit with the style. Although it is a minor criticism as it isn’t as noticeable in the levels itself. That and it is overshadowed by a bigger visual issue, the camera. By default, the camera is free moving and is frustrating to control. Notably, this is mainly moving from either top-down view to the camera being behind you or vice versa. At other times, it strangely seems to spin and gets nauseating. Luckily in the option menu it is possible to make the camera fixed, and this made the experience a lot better. When it stayed top down it would automatically move to the best position as you progress through the level, allowing you to focus more attention on completing the level. In a way, it would be better if it was fixed with the option to control each character with one joystick to help streamline single player gameplay, but a fixed camera is fine either way.>/p>

In terms of music, Never Breakup has a nice soothing soundtrack. It isn’t distracting enough to prevent you from focusing on solving the puzzle whilst proving nice ambient music in the background. Unfortunately, the sound effects are where the issues are as they come through extremely loud of some reason, particularly the jump noise that is a strange “bloop” that blares through everything else and is very distracting. Like the camera, this can be fixed by turning down sound fx in the setting menu, but it is strange it is that loud by default. Sure, it can be fixed, nonetheless it is still annoying as it is another thing the player has to fix. These make Never Breakup feel like it needs a bit more polish, with this and some spelling errors in some text. Still, at least these are minor issues.

Never Breakup is a solid co-op platformer, with interesting level designs to get you thinking as the rope limits your options. Unfortunately the mini-games aren’t as interesting and you’ll want to change some of the settings. Still, if you are looking for a unique new platformer look no further!