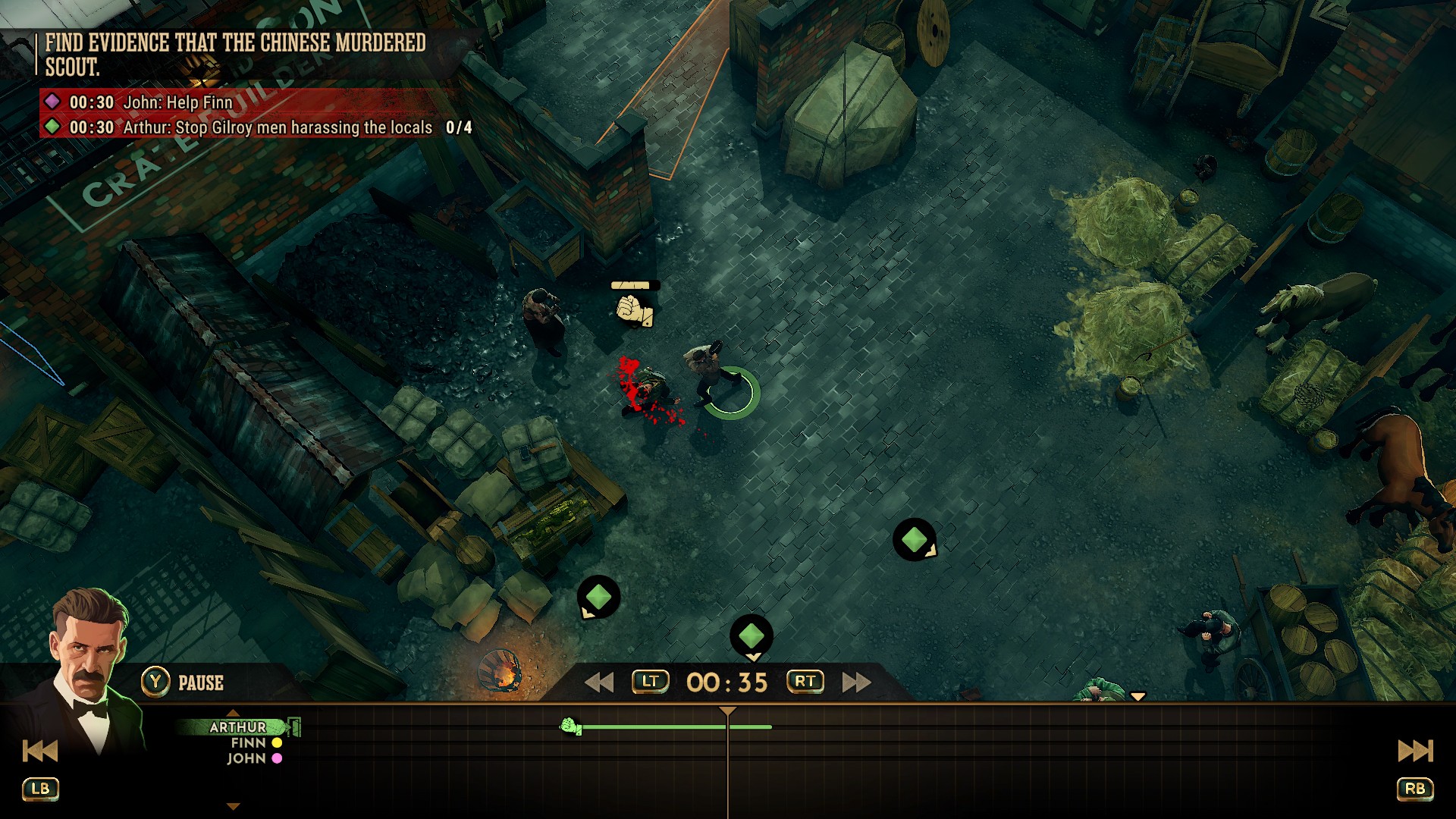 Well, isn’t this an odd one. FuturLab’s often ingenious take on the Peaky Blinders license feels like a game out of time, and in many respects, out of place. It might look like an especially polished mobile game at a glance (the platform we would expect to find a video game based on a TV show in 2020), but this is far beyond standard mobile fare while still being built wisely within the constraints of its somewhat limited budget.

Those hoping for a full-on virtual recreation of the hit BBC show will probably be left (initially) disappointed by Mastermind’s more rigid, mechanically structured and laser focused design, but once you get past the disappointment of its somewhat forgettable narrative, the lack of voice work and its limited scale, you’ll likely appreciate it for what it is – a mechanically perfect recreation of a singular aspect of the Peaky Blinders universe.

Wisely realising that attempting to recreate the show in full on a virtual platform with a limited budget was doomed to failure and unkind comparisons to the show, FuturLab has instead attempted to hone in on one specific part of the show and deliver something that could only be delivered on am interactive platform. Yes, there are obvious nods to the show with a narrative set before the events of the first season doing just enough to warrant the games’ link to the Peaky Blinders license, but the emphasis here is on putting you in the mind of Thomas Shelby and the tactical requirements of getting a job done using the skills of those around you and combining brute strength and tactical nous to stay ahead of the competition. 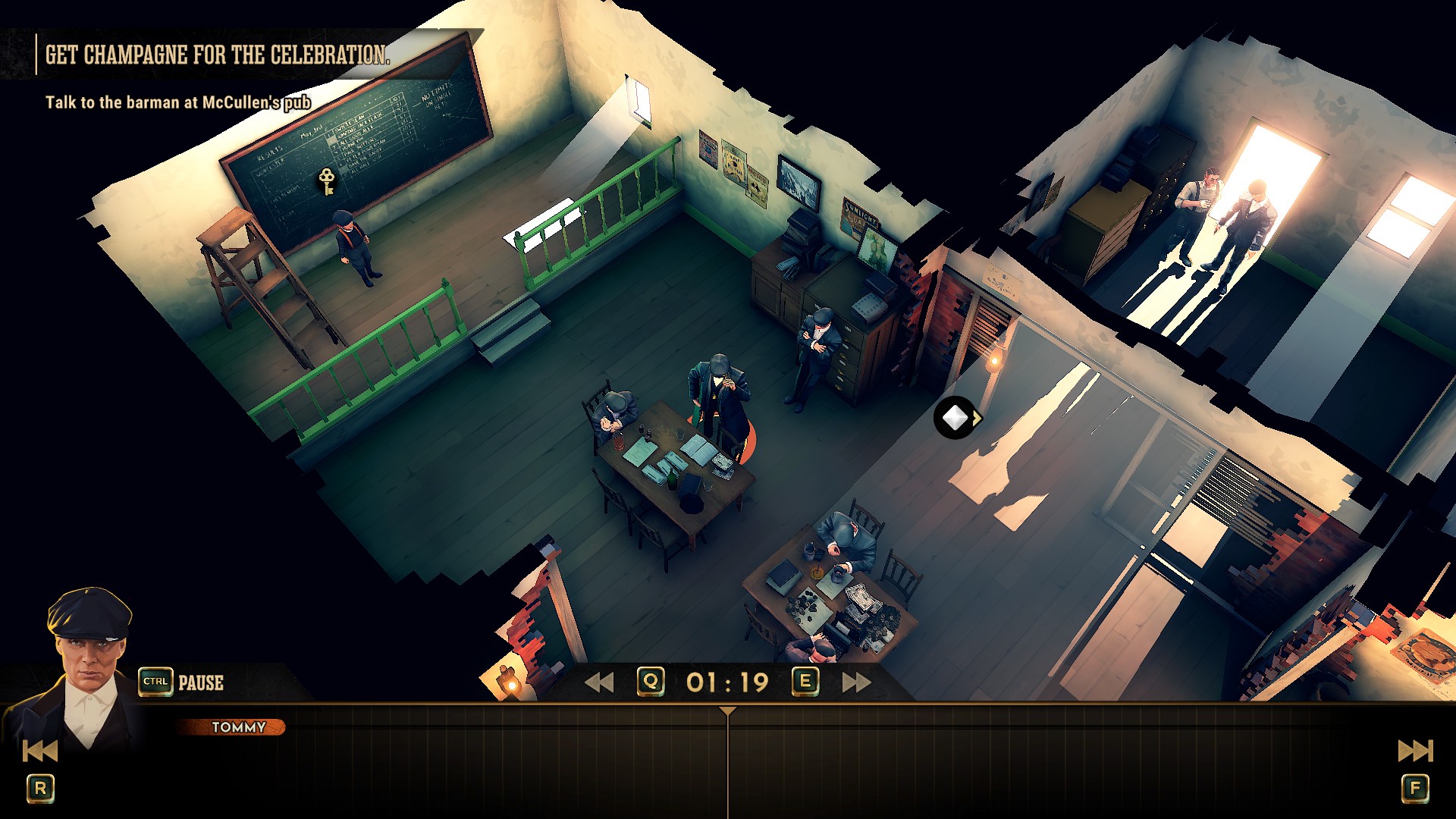 Despite its lack of budget and storytelling subtlety, Peaky Blinders: Mastermind does a solid job of recreating early 20th century, Birmingham and the finer details of Small Heath. It’s a shame that the similarities to the show rarely go beyond pure aesthetics, but there is enough here to deliver a genuine sense of familiarity while ensuring that the emphasis remains on serving the games’ strong puzzle mechanics.

Rather than digging into the past of the Shelby clan, Peaky Blinders: Mastermind uses your knowledge of the show to create an enjoyable and carefully crafted puzzle game built around the unique abilities of Tommy, Ada, Polly, Finn, John and Arthur. It adds nothing new to the lore of the show and its superficial narrative certainly lacks the depth or nuance found in the core source material, but if nothing else, it certainly does a great job of recreating the mindset and skills required for Tommy and his family to successfully pull off a job.

Set across 10 story missions, Peaky Blinders: Mastermind has you in control of up to 5 family members at one time as you carefully use each of their unique skills (bribing, pick-pocketing and fighting etc.) to carefully crack the puzzle set out in each stage / mission. While each character is controlled in real-time, the game’s unique selling point is that you can freeze time and move between characters as you see fit, allowing you to line up abilities so that events are aligned and each character’s skill can be used in unison. It’s a smart system, one that feels like a genuine puzzle as you move the pieces into place before it all clicks and the plan comes together in perfect harmony.

And my word, isn’t it rewarding when it does all fall into place. With each character positioned in the right place, and more importantly, at the right time, you can sit back and watch as your perfect planning comes to fruition. Sure, the design arguably lacks variety and underlying versatility, but as a collection of beautifully constructed puzzle boxes that manage to successfully capture the spirit of the show and the abilities of its core protagonists, Peaky Blinders: Mastermind is a huge success. 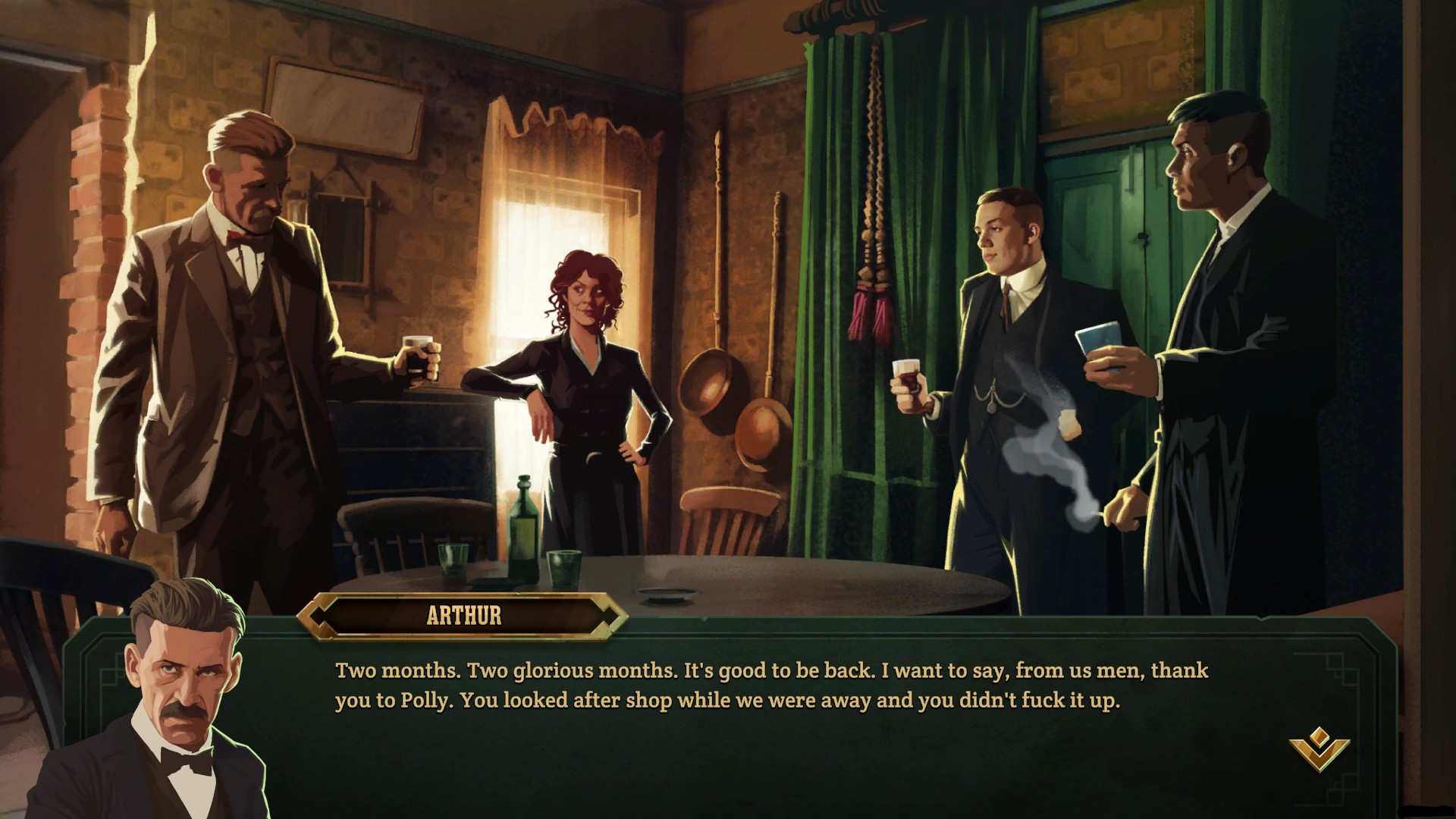 The carefully created structure of the game ensures that there isn’t a huge amount of replayability, but with a handful of collectibles and a hard mode to get through, there is still plenty of content for those looking to get the most out of this modestly priced download. It’s just a shame that the game takes so long to get going. It’s perfectly enjoyable throughout, but it’s only during the final three or four missions that the training wheels are truly removed and you get the chance to use the entire cast in unison. Those last few missions are easily the best in the game, and it’s a shame when it comes to an end just as it is getting into its stride – if ever a game needed some DLC, it is this one. Even if they abandoned the story in its entirety, a handful of especially challenging missions that utilise all the skill available to you would totally do the trick.

The storytelling and characterisation might not be particularly impressive, and its links to the show are often superficial at best, but on a mechanical level, Peaky Blinders: Mastermind successfully captures the spirit of the show via its carefully crafted and perfectly implemented mechanics. The games’ puzzle box design delivers the kind of experience that could only work in the video game format, and instead of true recreation, FuturLab have wisely created a unique experience that sits comfortably alongside the show. It’s a shame that its best content is found in the latter stages of the game, but even as it teaches you its somewhat unique mechanics, Peaky Blinders: Mastermind is never anything less than perfectly enjoyable.

Peaky Blinders: Mastermind manages to successfully capture the spirit of the show via its carefully crafted and perfectly implemented mechanics.