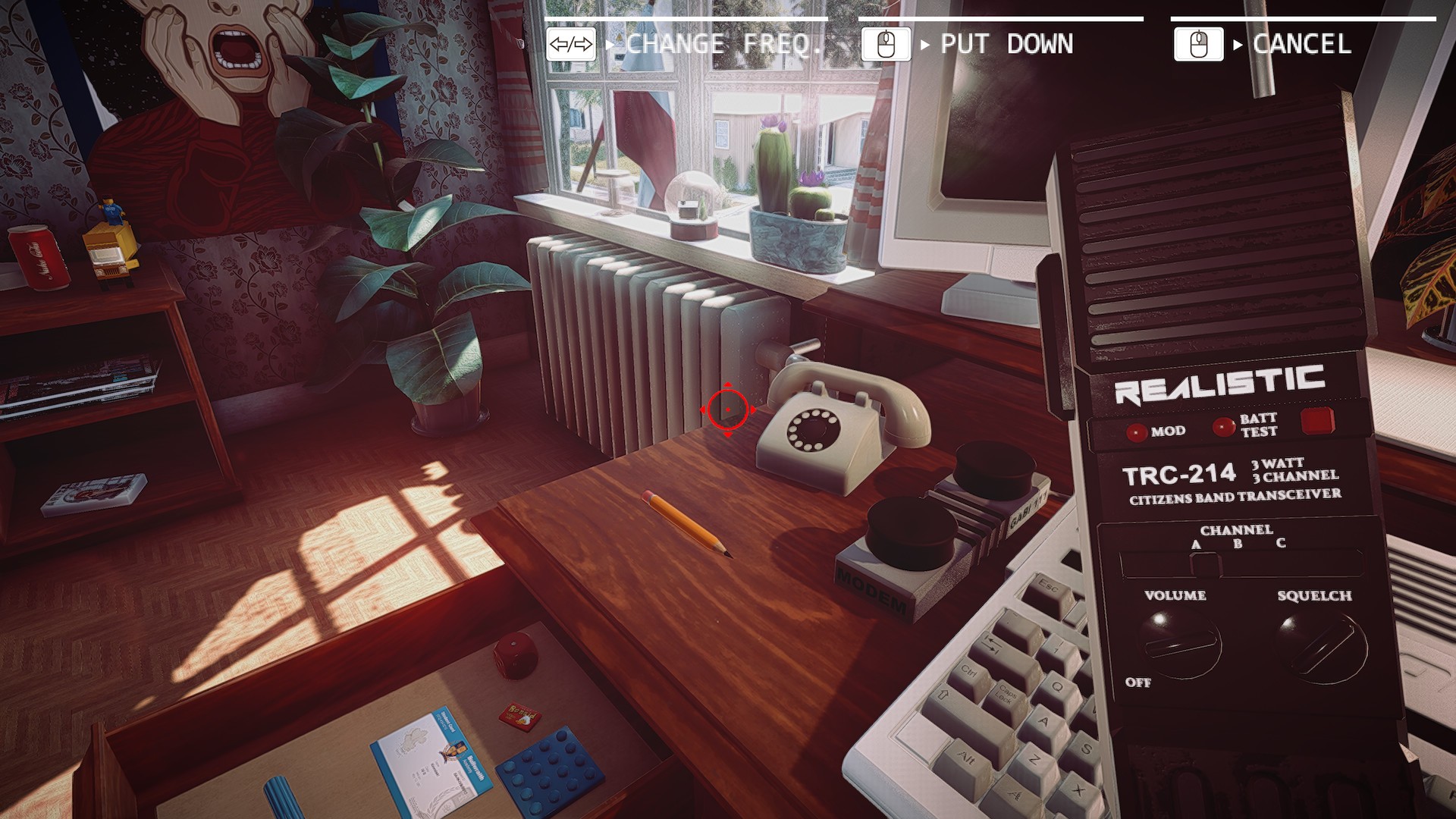 When I first saw Commander ’85, I was immediately drawn to the 80s visuals reminiscent of Stranger Things. Little did I know what a trip this point and click sci-fi adventure would be.

Set in Chicago, Illinois, Commander ’85 begins with an unusual scene of a dead body in a home in 1985 that is deemed a ‘suicide’ (yeah, I think not). We are then taken back to a year before in a little suburbia where a young lad has received a personal computer for his birthday called Commander ’85. Turns out that Commander ’85 comes preloaded with built-in Artificial Intelligence, which enables the computer to directly communicate with you. You soon get to see the power that you possess with Commander ’85 when your very pregnant mother discovers that you have been bunking school and the AI offers a solution – hack into the school system and change your records. Look, I’m not saying that I agree with that solution, but I understand. Who wants their mother to go into early labour? So, I guess it was about her health more than my school records.

It doesn’t take long before Commander ’85 is hacked by a virus – another kind of Artificial Intelligence, which is definitely not a fan of the human race. But this new AI seems to have access to US Military information and is hell bent on ‘fixing’ things. This wouldn’t be such a bad idea if it didn’t involve missiles and the USSR. Your role is to delay the hacking of Commander ’85 for as long as possible so as to not set off a chain of events that leads to the realization of your recurring nightmare – seeing a nuclear bomb go off in your city. With the help of your walkie-talkie, your best friend Luke, and Commander ’85 itself, your actions (and lack thereof) could uncover a much more sinister plot and hopefully save many. But can it be done? 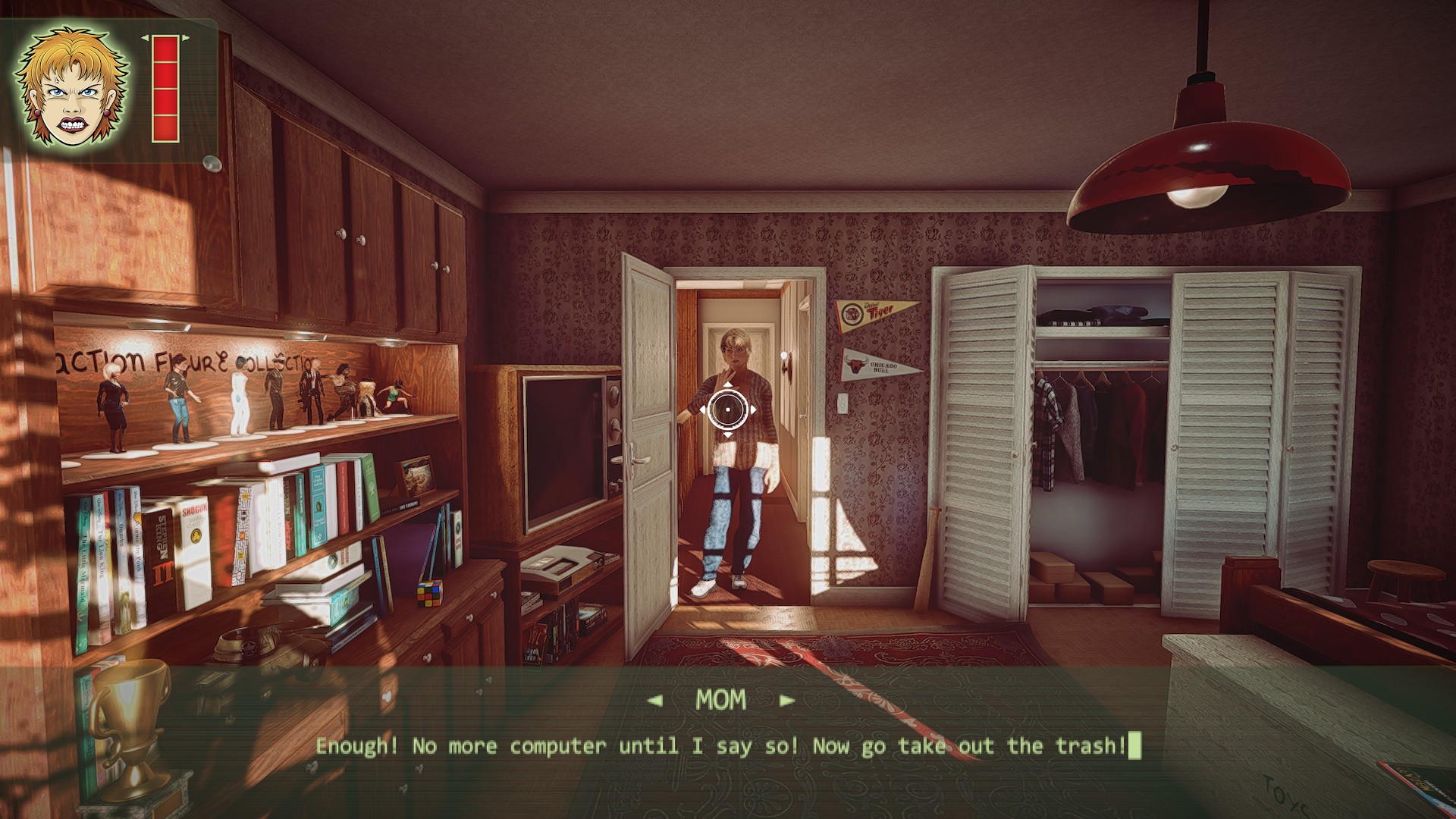 Commander ’85 is played as a first-person, point and click, adventure and simulation game. Set in your bedroom, you can interact with a number of items. From your drawers, to the cabinet, radio, TV, magazines, a retro joystick and of course Commander ’85 to name a few. Your most important tool you’ll come to discover is your telephone. This is the mode for your hacks and the ultimate means to dig and uncover things that a normal citizen shouldn’t know.

I’ll be honest, Commander ’85 felt quite frustrating in the beginning. Engaging with the AI was cool, but definitely not easy to get right off the bat. It took many tries before I successfully hacked the school. This stems from the user interface of the Commander ’85 computer. It is true to its age in that it has a very limited memory, so in order to run certain processes you will need to ensure there are free threads available. Depending on what you need to do and its size, you may need anywhere from one to four threads to run a single task. I know, this sounds less like a game and more like a programming course, and to be honest, it feels like it most of the time. But somehow, Commander ’85 manages to make using the computer feel like second nature after a while.

So, what exactly can Commander ’85 do? Well, I’ve already mentioned the hacking, but there are few other cool things you can play around with in your limited time with this powerful machine. You can use your phone to connect to someone else, or even secret bulletin boards (If you play your cards right, you can find yourself reading a conspiracy manifesto of flat-earthers that claim to have proof of the evils in the government). Or you could call your best friend Luke and play a game online – yes the games are on a floppy disk. You can even hack Area 51 if you try hard enough (no, seriously I’m not kidding). All things are to be done with caution as Commander ’85 is under attack and this is no ordinary computer.

Let’s talk about best friend Luke for a moment. This guy is definitely the homie. He is the only one you can talk to about what you’ve uncovered about Commander ’85 and he is there to help you figure out what exactly is going on. Unfortunately, it can get dangerous for you both. But then again, what are friends for? 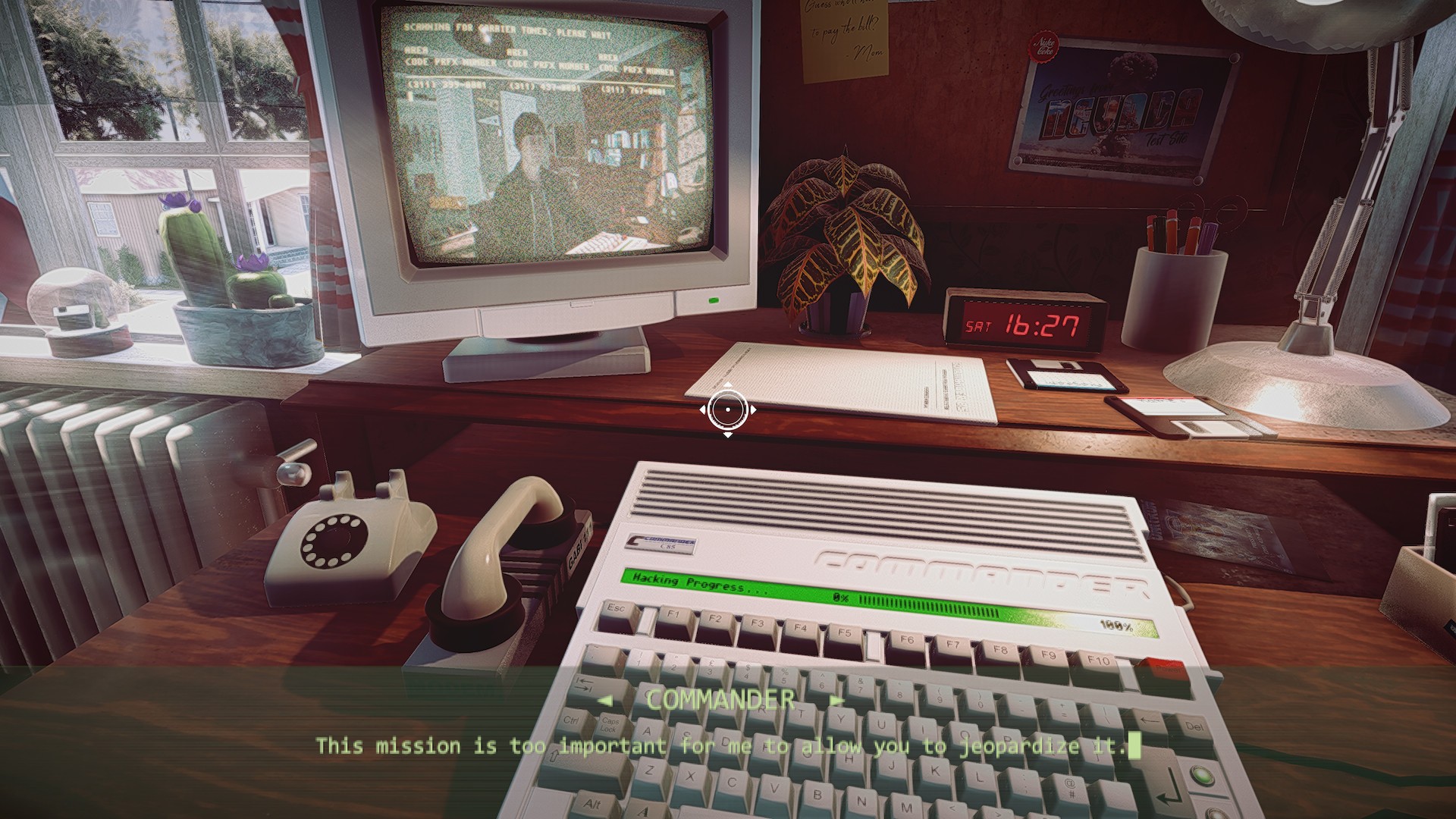 There are also some nice little quirks to this game. One of my favourites was the sound of your dog snoring while you keep busy on Commander ’85. With being a teenager, you still have rules to follow – sadly. So, from taking out the trash, to walking the dog, helping decorate your upcoming baby sister’s room and whatever else Mommy dearest asks of you. But all of these are a choice and you can decide to not do them, be warned that you will know exactly how she feels about you thanks to a dedicated Mom-o-rage meter (that’s what I call it anyway). She is not a fan of you spending hours in front of a screen and your body isn’t either. Because you are human, you will get tired and the more tired you are, the harder it is to do things like see clearly and move with adequate speed. So, get some rest. Another of my favourite quirks of Commander ’85 is the fast forward function. In instances where there is no dialogue or you’re waiting on something important happening later, you can fast forward. But this is where it gets really nice, the fast forward is like that of VHS tapes. You will also notice a few pop culture references scattered throughout the bedroom. This subtle detail along with the soundtrack was a nice touch in keeping with the time, theme and aesthetics of Commander ’85.

The playthrough itself is quite short and there are three possible endings that you can reach. It quite interesting how with each playthrough you try to see what the Commander ’85 can do and see how sometimes your ideas actually work. With that being said, I did experience some issues with Commander ’85. The loading time, for example, can be rather long (but the soundtrack tends to make it bearable). I also found that if for some reason, my controller got disconnected, it can take a while for it to get back to where you left off. In one playthrough, this completely ended my game along with the progress made and I had to start a new game. Another thing, as I mentioned earlier, is the initial learning curve for using the Commander ’85. Even the manual is daunting when you just want to figure something out. But once you get the hang of it, it becomes more enjoyable to push the Commander ‘85’s limits.

Overall, I found Commander ’85 to be a cool retro-styled game with well done aesthetics and details. It may not be everyone’s cup of tea, but definitely worth a try – and who knows, maybe you could discover where the Twilight Zone is.

Commander ’85 creates a cool sense of nostalgia and is a cool take on what a first-person sci-fi thriller point and click game can be.