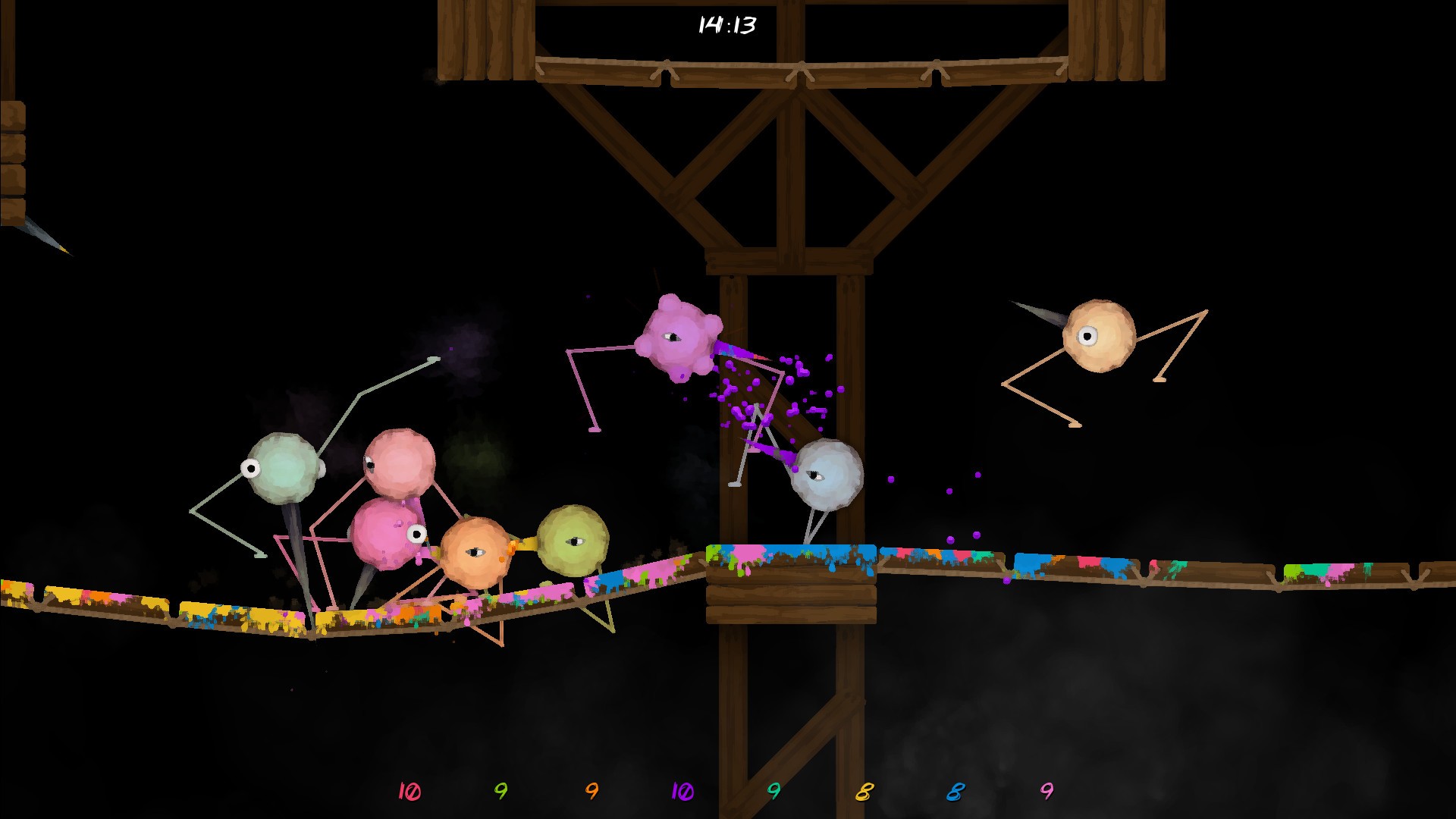 It seems nowadays that most video games are centred around the concept of violence, giving players the ability to do whatever unspeakable acts they desire in the safety of their living room. But now that video game violence has become less of a taboo and more of a formality, is it possible for games to survive solely based on their aggressive gameplay? If STAB STAB STAB! is anything to go by, no, they can’t.

In this game, you play as circular blobs called fleshbirds, with long legs and spiked beaks that you can use to impale each other. The game aims to kill each other as fast as possible, and while you can change the settings for a slightly different experience, I stuck with the game’s default of trying to kill five enemies the fastest to win. The game doesn’t have a tutorial, and the simple controls are easy to pick up and only take about a match to fully master. You can choose from a selection of stages, and the small power-ups in the game do try to keep things interesting. You can play with up to four friends, or if you’re looking to blow off some steam alone, there are CPU opponents also available. With a versus mode that’s a complete free for all or a survival mode that lets you battle wave after wave of AI ‘cronenbirds’ until you drop, STAB STAB STAB! doesn’t have much else to offer. 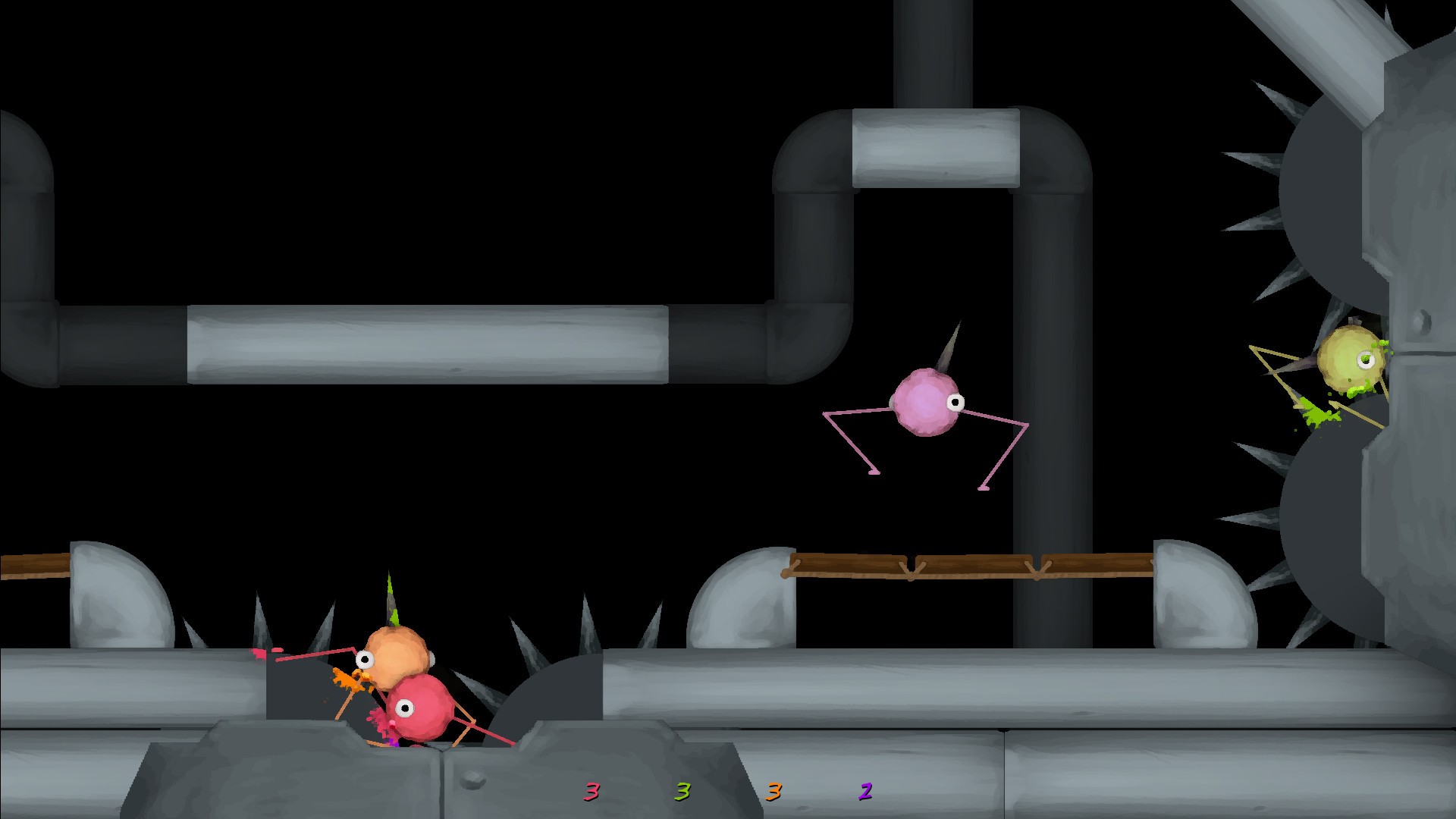 The main issue in STAB STAB STAB! is that once you’ve played it once, there is very little reason to pick it up again. The controls and gameplay are intuitive enough that their initial hilarity gets old within the first few matches, and the lack of variety means that the game gets repetitive very fast. And unlike games like Goat Simulator or Turbo Dismount, the goofy-physics aren’t actually all that unpredictable or hard to control, which I thought made the game a less entertaining experience overall. The power ups do help; extra legs, super-long tentacles and wings do add a little variety and can help you get the upper hand against your opponents. However, I found that the power ups also became fairly repetitive as there was never a time that I couldn’t see one on-screen, which took away some of the novelty.

The overall style of the game is nowhere near as violent as many other games on the market, though I was slightly unnerved at the way the characters look as they try to pop each other to death. Whilst being attacked, the fleshbirds become more distressed as they take more damage, with the attacking fleshbird looking uncomfortably smug. Perhaps it’s due to the cartoony art style and bright colours, but the sickening pop each time you manage to pin a wide-eyed fleshbird into a spike in the wall is aesthetically an odd choice, highlighted even more so by the game’s lack of music. The only options you have audio-wise are to disable the little chirps and squeaks the fleshbirds make throughout the matches, which are under ‘Annoying Sounds’ in the menu. It might be telling that even the game designers knew that the only audio they included was ‘annoying’, which makes me question the lack of music in the game even more. 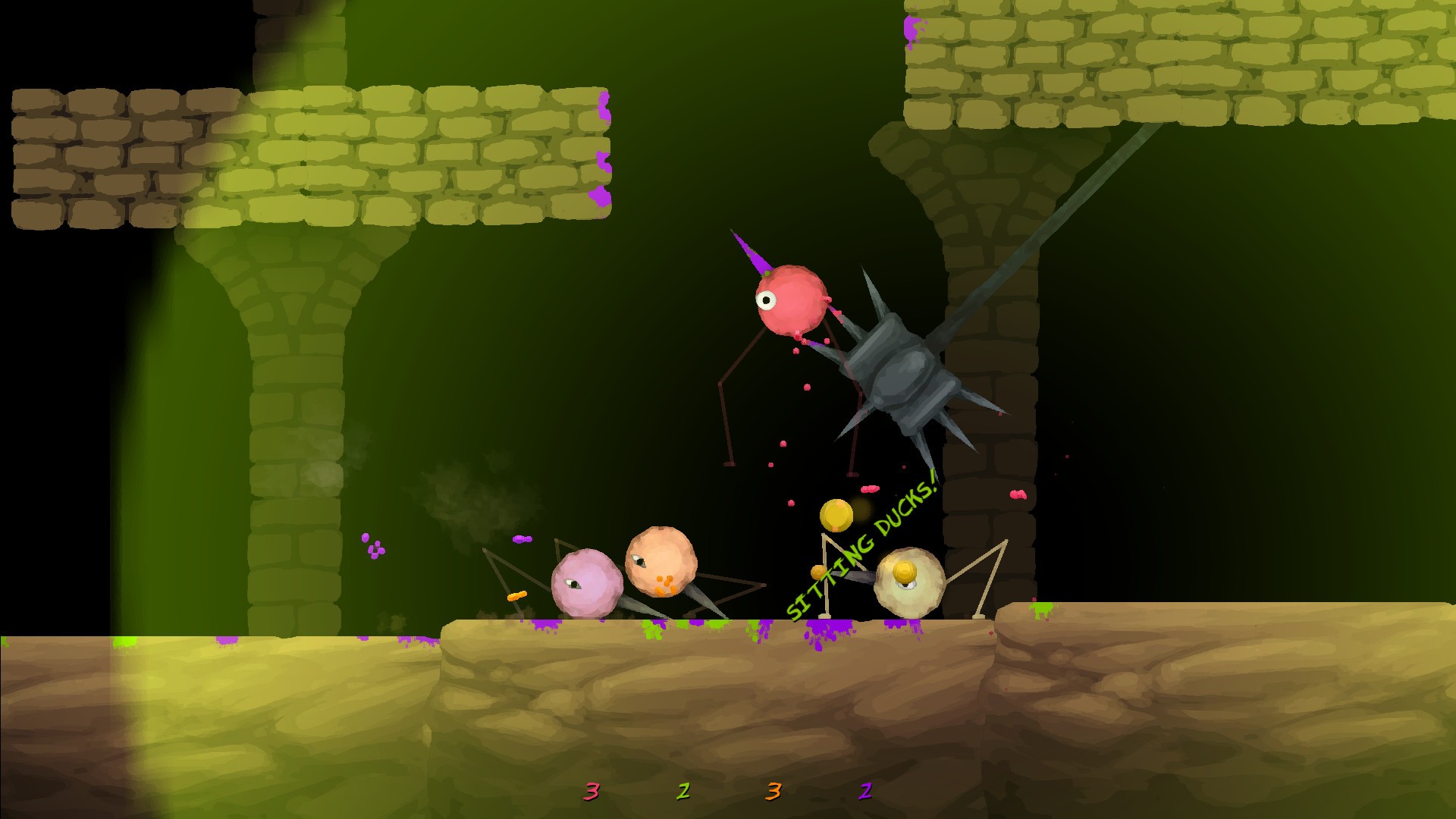 I feel that with more gameplay options and variety, STAB STAB STAB! on the PS4 could become an impressive couch multiplayer fighting game. The game’s most glaring problem is that I had no interest in replaying it after the first 10 minutes were over, as I felt I had already mastered the game and seen all it offered. Maybe with an actual soundtrack and some juicy content to fully pad out the game, this could be something I would consider revisiting, but as it stands now, STAB STAB STAB! just doesn’t make the cut.

STAB STAB STAB! is unsurprisingly a game about stabbing people, but somehow lacks any real edge to its gameplay.