Home
/
Blog
/
A ‘Journey’ Unlike any Other
Share Review 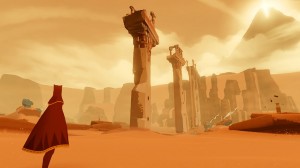 There has been a lot of coverage this generation on the concept of videogames as art, and while even the most jaded of critics would be hard pressed not to admit the industries leap forward in recent years, thanks in no small part to the success and widespread coverage of the likes of Braid and Limbo et al, it’s the PlayStation exclusive, ‘Journey’ that has come to finally smash down the wall of preconception that still clouds many people’s minds concerning the potential inherent within the industry.

If you ask me, videogames had the potential to create ‘true art’ long before Journey made its appearance in 2012, but while I appreciated that there was still a counter argument before its release, I now find it increasingly difficult to slip out of my ever more entrenched position on the matter – especially now that I have Journey in my corner. Yes, everyone’s perception of what art is and what makes art is intrinsically unique, but I’d be hard pressed to find a movie, song, painting or book that has proved as thought provoking and as downright affecting as Journey did in 2012.

While its artistic sensibilities are clear for all to see, its greatest accomplishment is still how it managed to achieve such artistic heights while remaining true to its format. Telltale’s, The Walking Dead Series has been rightly heralded as a step forward for videogame storytelling in 2012, but other than a handful of basic interactions, arguably could have worked just as easily as an animated TV show. Journey however, is a videogame in the truest sense of the word and could not be achieved with the same level of emotional and artistic impact if it were anything else.

Still, despite its core design being based largely upon the most fundamental aspects of videogame design, Journey still manages to transcend both its genre and its format to create something genuinely unique. Make no mistake; Journey is art and more importantly, it’s an experience that could not be achieved in any other art form. Journey is that greatest gift to gamers – it is art on our own terms.

With the links between videogames and violence once again being dragged to the fore as shelves are once again filled to the brim with well made, but often uninspiring sequels, it’s better than ever to know that games such as Journey exist.