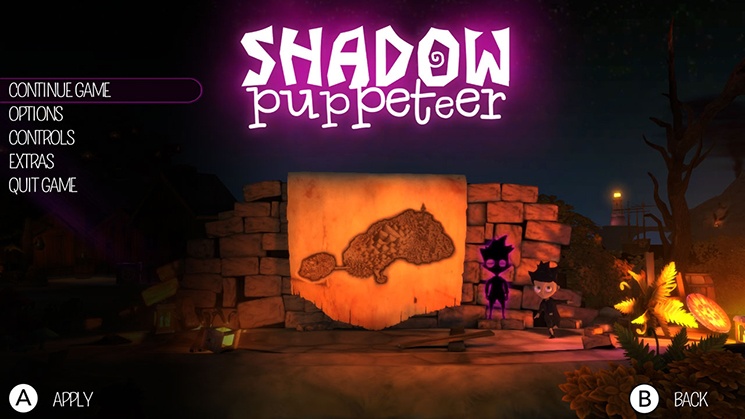 Shadow Puppeteer is a unique puzzle platform game from Sarepta Studio. The game follows the story of a young man whose town has been terrorized by an evil shadow puppeteer. The half man, half beast has stolen the shadows of the townsfolk, but by a stroke of good fortune failed to steal the shadow of the protagonist. Instead his shadow merely became detached and now acts independently from the young man. This is how the main mechanic of the game operates.

Designed with local co-op gameplay in mind, Shadow Puppeteer combines 2D & 3D platforming, with the young man free to roam around the stages and his shadow travelling alongside against walls and surfaces. In order to get to the end of each stage the boy and his shadow have to work together, solving physics based puzzles in a similar vein to games like Trine. By moving objects and manipulating sources of light, the boy can cast shadows onto the background which his partner can use as platforms. At the same time the boy’s shadow can manipulate physical objects by pushing and lifting their shadow counterparts.

For me, Shadow Puppeteer is a mix of previously seen gameplay mechanics that are used in a new, unique way. It’s possible to play this game in a single player mode using the left analogue stick to control the boy and the right analogue stick to control the shadow. This was the technique used to control a similar puzzle game named ‘Brothers: A tale of two sons’. In addition, the concept of a platform game that’s played in shadows is very similar to the 2013 Playstation game ‘Contrast’. However, combining these mechanics makes for a wonderful and unique experience.
The graphics are particularly nice in this game. It was built using the Unreal engine and the 3D models give the game a nice cartoon feel. The game begins with a very high quality pre-rendered cut scene of the shadow puppeteer creeping into town and casting his evil magic. I was very impressed with all the subtle detail like the realistic ripples in the water or the reflections that can be seen in the young boy’s eyes. 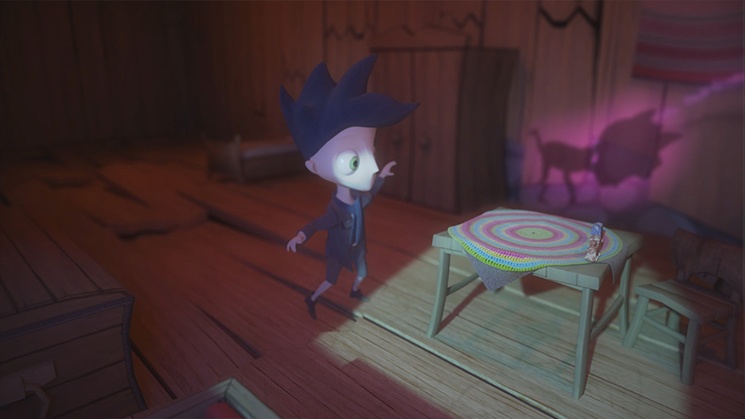 Once the gameplay begins the graphical standards do not slip. The stages are all beautifully crafted with rich, detailed textures and strong dynamic lighting. On top of which, the visuals maintain their cartoon style charm with some of the interactive elements such as ladders and shields looking hand drawn.

Shadow Puppeteer is a deeply atmospheric experience. One element that really helps to boost this factor is the sound. The music is very relaxing and tranquil, which suits the slow, methodic pace of the game.

This title is split into five worlds, each of which contain a hand full or short puzzle based levels, followed by a boss fight. The solutions to the puzzles are usually pretty straight forward and most players should be able to breeze through them at a steady pace. Should either character fall out of the screen or get too far away from each other, then the stage will either restart from the beginning or from the last checkpoint that both characters crossed. Given that you have unlimited lives and the frequent auto saves, progression is very easy to attain.

The only time I found this game to be difficult was during the boss stages. The bosses themselves are not difficult to beat in their own right, however while playing in single player mode I found it extremely disorienting to be in control of both characters simultaneously during action sequences. It’s the video game equivalent of patting your head and rubbing your stomach at the same time. It’s not really a problem during the puzzle stages as you can move each character a little bit at a time, at your own steady pace. In contrast, controlling each character while being attacked by a shadow beast proved to be very difficult. I think on balance the boss stages should have been reworked, at least in single player mode.

In addition to the boss stages, I also encountered a few little movement and control snags like characters not being able to walk over incredibly short obstacles, so in dark spots it’s difficult to see why you’re stuck.  Also the game appears to be extremely finicky when it comes to interacting with objects. For a character to grab a block or pick up an item you have to be stood in exactly the right spot at exactly the right angle, otherwise the action button will not respond. Sometimes this can make simple tasks very awkward and frustrating to pull off. 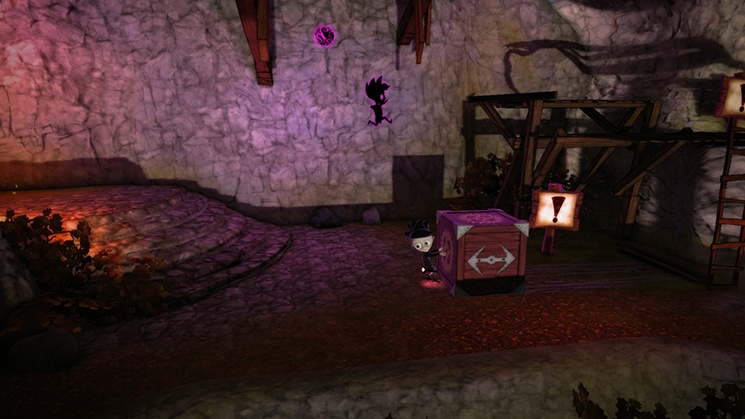 This game is relatively short and providing that you do not get stuck on any of the bosses (as I did) you should be able to beat it within a couple of hours. There are no difficulty settings or additional modes outside of single player or co-op, however each stage contains collectible orbs in hidden or harder to reach places. So if you fancy replaying some of the stages you’ll have extra incentives while trying to collect them all.

Overall Shadow Puppeteer isn’t a bad game, however I did experience a few technical problems with the WiiU port that I think are worth mentioning. For a start, the loading screens between stages do tend to linger on for a while. This wouldn’t be so much of a problem if the stages were longer, but since each level is pretty short these loading screens really do disrupt the pace of the game. I also experienced a random crash which froze the game during play. I was able to restart the game using the ‘home’ button so no major harm was done.

A more serious issue I discovered was a bug that occurs when the WiiU gamepad is switched off. I was playing with my WiiU pro controller and hadn’t realised that my gamepad had run out of battery. Despite the fact that I wasn’t using it, the game kept on pausing itself. I restarted the program (again, with the pro controller) and as my gamepad was switched off, it failed to boot up correctly. Each time I attempted to load the game it crashed so badly that the only way to exit was to hold the power button down on my WiiU console for several seconds. When I realised what was causing the problem I stuck my gamepad on charge and was able to continue, however this is an issue that needs fixing.

Overall, Shadow Puppeteer is a game with a lot of nice qualities and a small smattering of flaws. The co-op / shadow mechanic is a fantastic idea and this is a lovely little game to showcase it. However the puzzles themselves feel a tad dry and could have been expanded upon. I really like the game’s style and atmosphere, however due to the convoluted nature of single player mode I believe you’d probably get the most out of this game if you are playing with a friend.