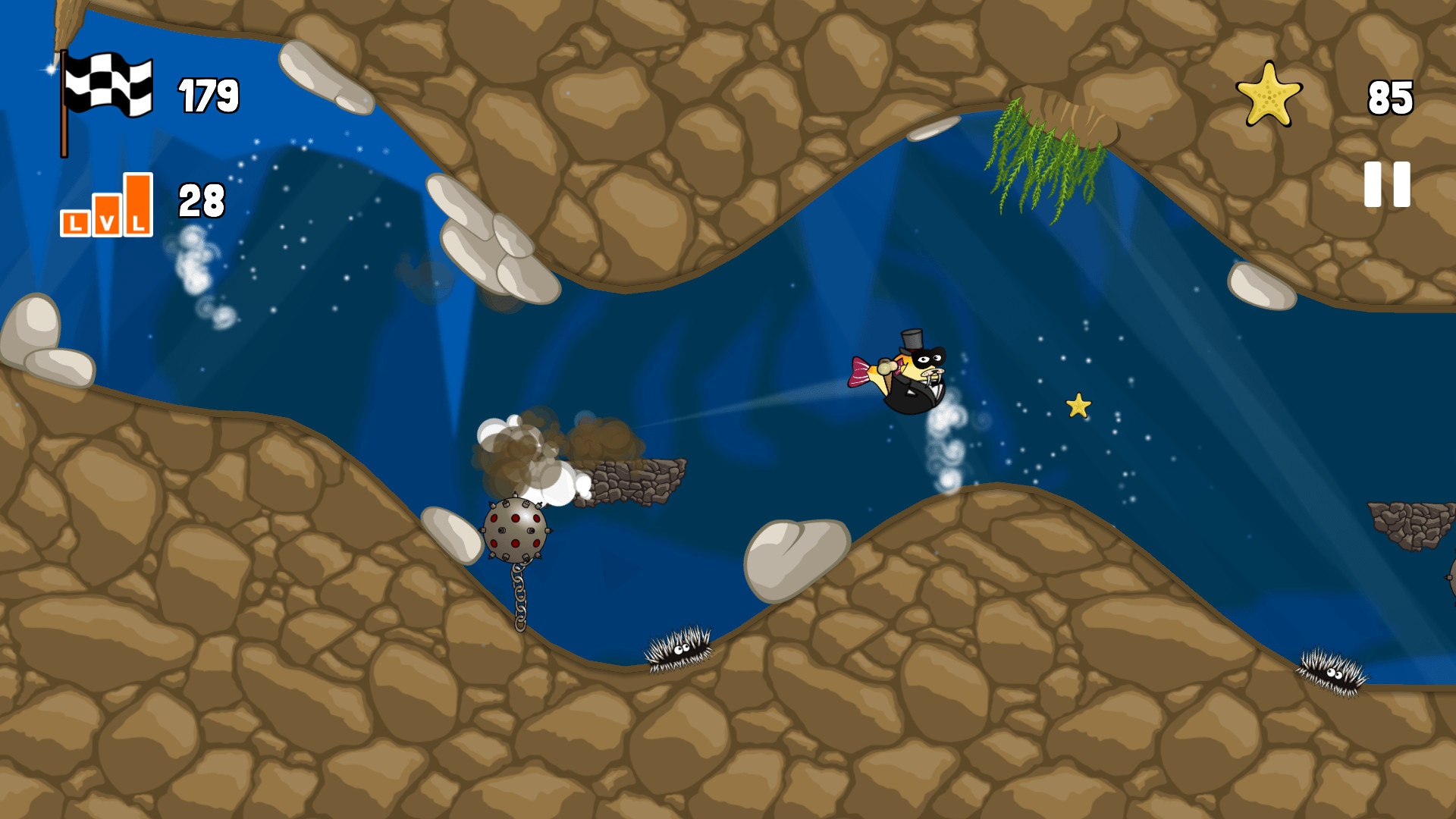 With a name like Blowy Fish you’ve probably already guessed the type of game this will be – a simple premise (probably a puzzler or platformer) designed for casual gaming. And you’d be absolutely right. This 2D indie game tasks you will propelling a puffer fish through a series of short but hazardous levels and bears a basic similarity to Flappy Bird (which is likely the inspiration for its name), although the actual method of moving your character is more reminiscent of the Angry Birds franchise.

Seemingly unable to swim, you manoeuvre Blowy Fish like a slingshot – pulling back on his tail to determine the angle and power with which your aquatic hero is launched. It’s origins as a game for mobile devices is obvious as it’s clearly designed to be played with a touch screen, although playing with the mouse is perfectly fine as well. The levels are all randomly generated and very short – it’s possible to complete some in under a minute – so better suited for quick burst of gaming to kill time rather than sat in front of a PC or laptop.

The visuals also clearly highlight the mobile roots with the basic 2D flash-style graphics and simple bright colours. The graphics are perfectly adequate and suit the game, but there’s a distinct lack of personality to any of the characters (particularly with Blowy Fish himself) and the animations are extremely basic. That’s a real missed opportunity as with a bit more charm and humour Blowy Fish would definitely be much more appealing. Even with a variety of enemies and obstacles it just feels a bit bland. 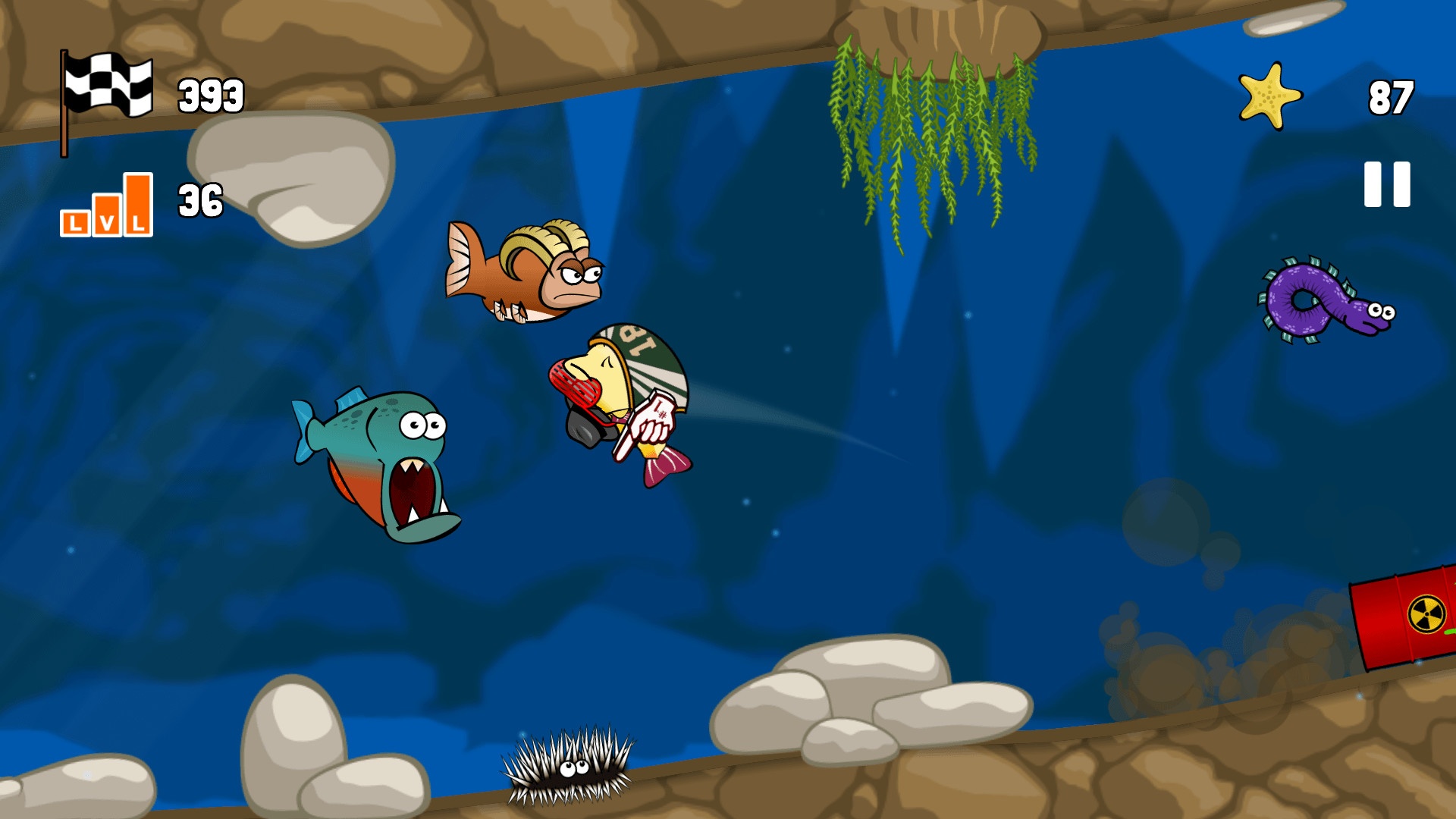 However it’s not just the graphics that are lacking as while the gameplay is amusing for a few minutes the flaws become obvious pretty quickly. Chief among these is your limited view of the area ahead of you, meaning any ambitious jumps are leaps of faith meaning you often end up dead. As a result you’ll often find limit yourself to lots of small cautious jumps in order to succeed, which isn’t particularly exciting. Even then luck still plays a bit part in progressing as the random levels mean the difficulty varies wildly from one section to the next – to the extent that it’s often quicker to quickly kill yourself and hope you respawn in an easier level. Another gripe is despite the basic gameplay seemingly geared towards quick periods of gaming, the watery environment can lead to sections that are frustratingly slow as you watch Blowy Fish lethargically drift to a halt after each jump.

There is a small element of tactics involved as you can use patches of seaweed to jump safely around the environment and avoid bumping into enemies – many of which kill you instantly with any form of contact. And admittedly timing is important sometimes to navigate or dodge around certain enemies or obstacles, but even this is a minor aspect. 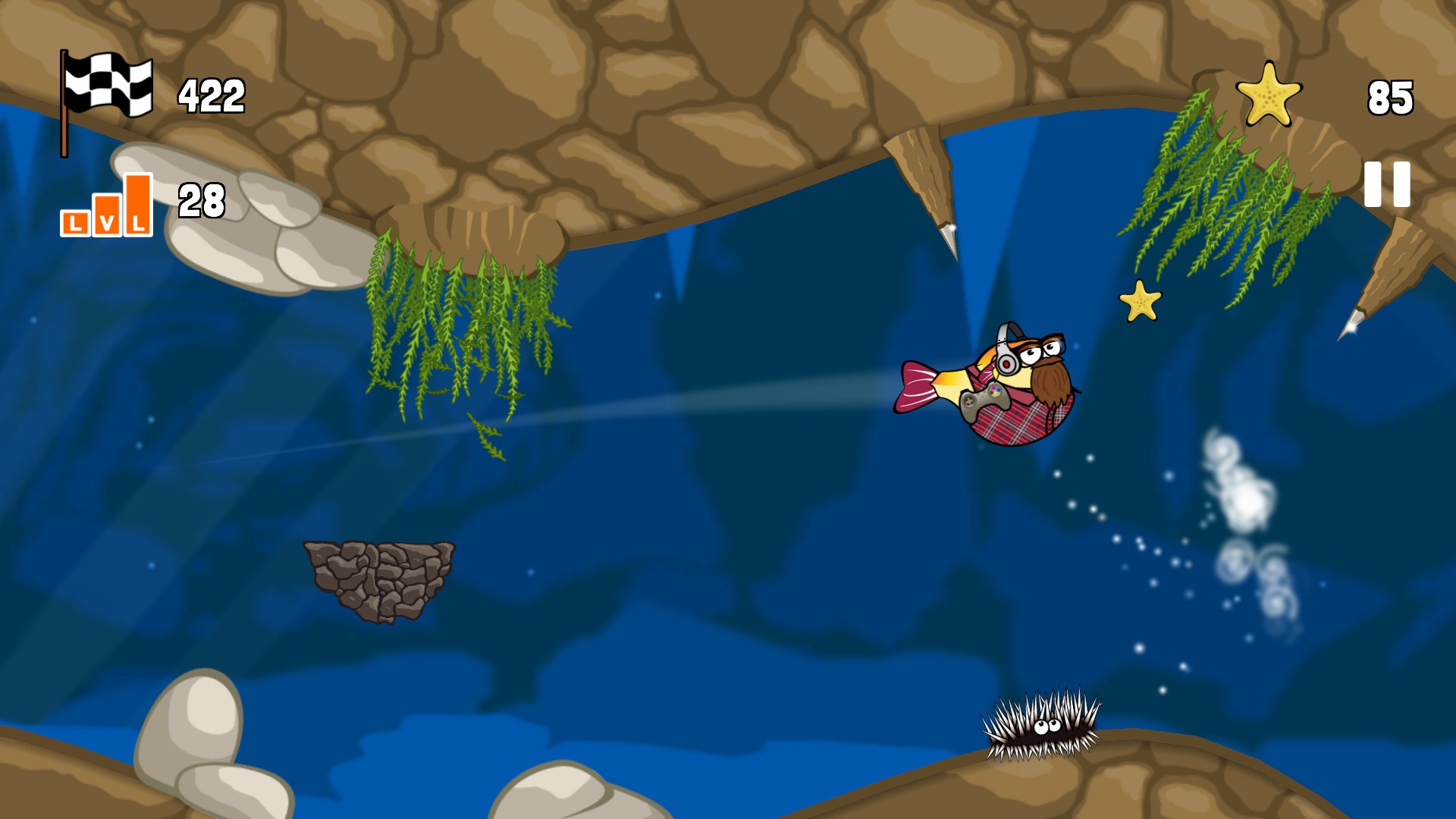 There also isn’t too much to aspire to when playing, as the campaign mode only consists of 50 levels with no real variety. They are all randomly generated and the combinations of enemies can vary but they all start to blur together. You can collect stars when playing to unlock costumes and superficial items while playing although I can’t really see the appeal myself. Younger gamers might appreciate this, as well as the simplistic gameplay, but again this is clearly something that would work better on mobile devices.

One surprising aspect in the transition to the PC format is the inclusion of Steam achievements and trading cards which is unusual for a smaller indie game such as this and might help make it more enticing for some gamers. Overall though I can’t really recommend Blowy Fish for the PC, although at under £2 it does represent reasonable value for money. However if you really do feel compelled to give it a go or want to occupy a younger gamer you’re probably better off purchasing the mobile version.