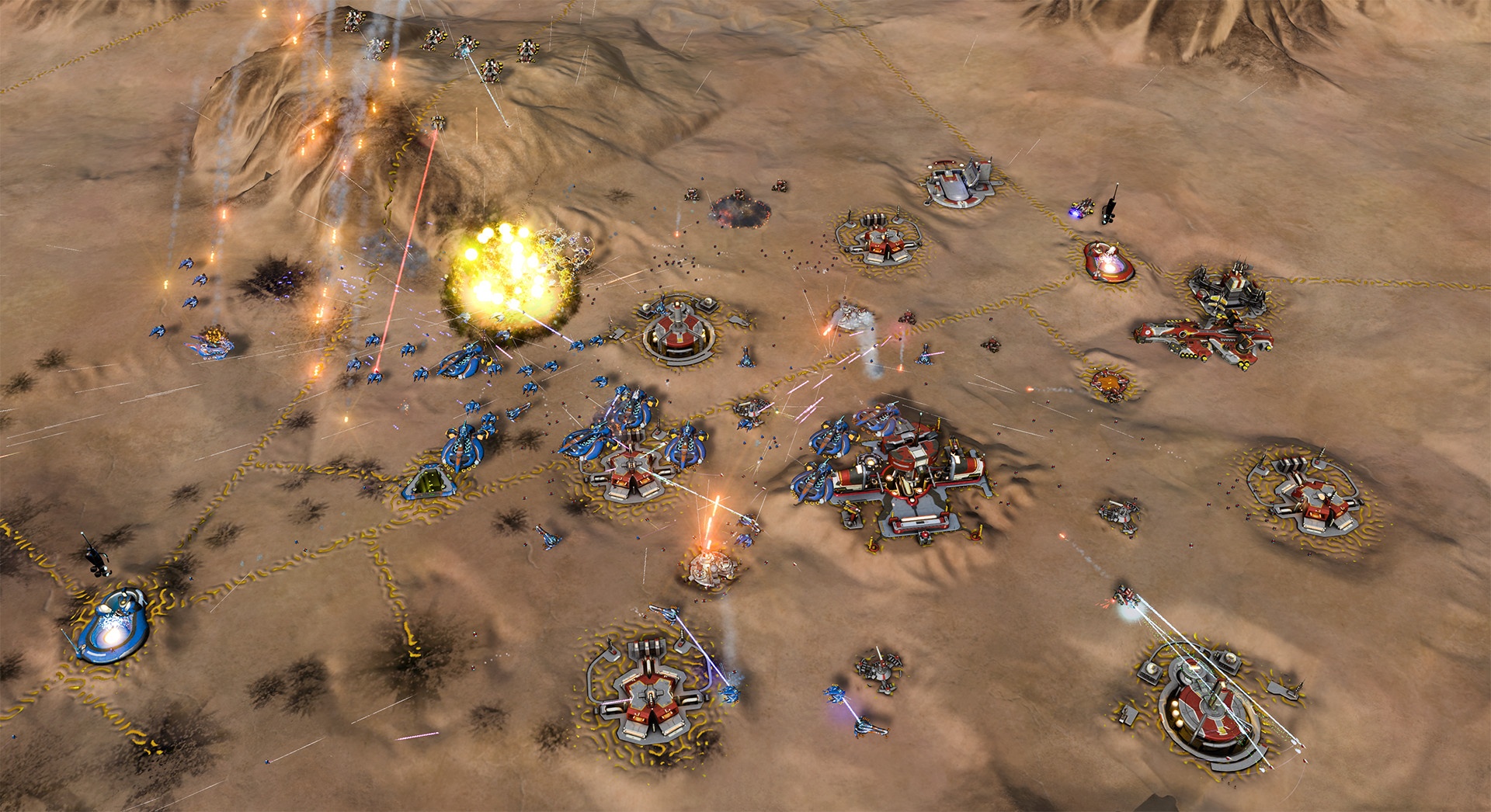 Real-time strategy games are where my love for gaming was born. The likes of Age of Empires and Total Annihilation will get me frothing at the lips more than a double shot of rabies! Then came Supreme Commander in 2007, the spiritual successor to Total Annihilation. Both games focussed on creating sprawling bases and huge armies of space-age death machines, causing intense tactical battles. With nearly a decade behind the Supreme Commander, we’re treated to it’s spiritual successor – Ashes of The Singularity.

The premise for Ashes Of The Singularity is very much similar to that of Total Annihilation and Supreme Commander – rake in the resources, spam out a ridiculous amount of military units, then collect your opponent’s head. Sounds simple but it isn’t. RTS games on this scale require so much planning and strategic thinking to truly serve someone’s ass to them.

What might we expect from a game with such deep ties to previous RTS success stories? For starters you might not be surprised to find out that Ashes of The Singularity boasts extreme production values when it comes to the aesthetics. Running on an exclusively 64-bit (direct-X 12) engine, the game runs top of the range graphics at peak performance. This is key to the gameplay as well, as the whole premise of vast, laser-toting armies relies on a solid engine to prevent frame rate drop. With missiles flying everywhere and fighter jets swooping overhead, the player might not get a chance to zoom in on individual models; but if you do by some freak accident, be prepared for a treat as Ashes of The Singularity contains some stunningly detailed models and terrain textures. 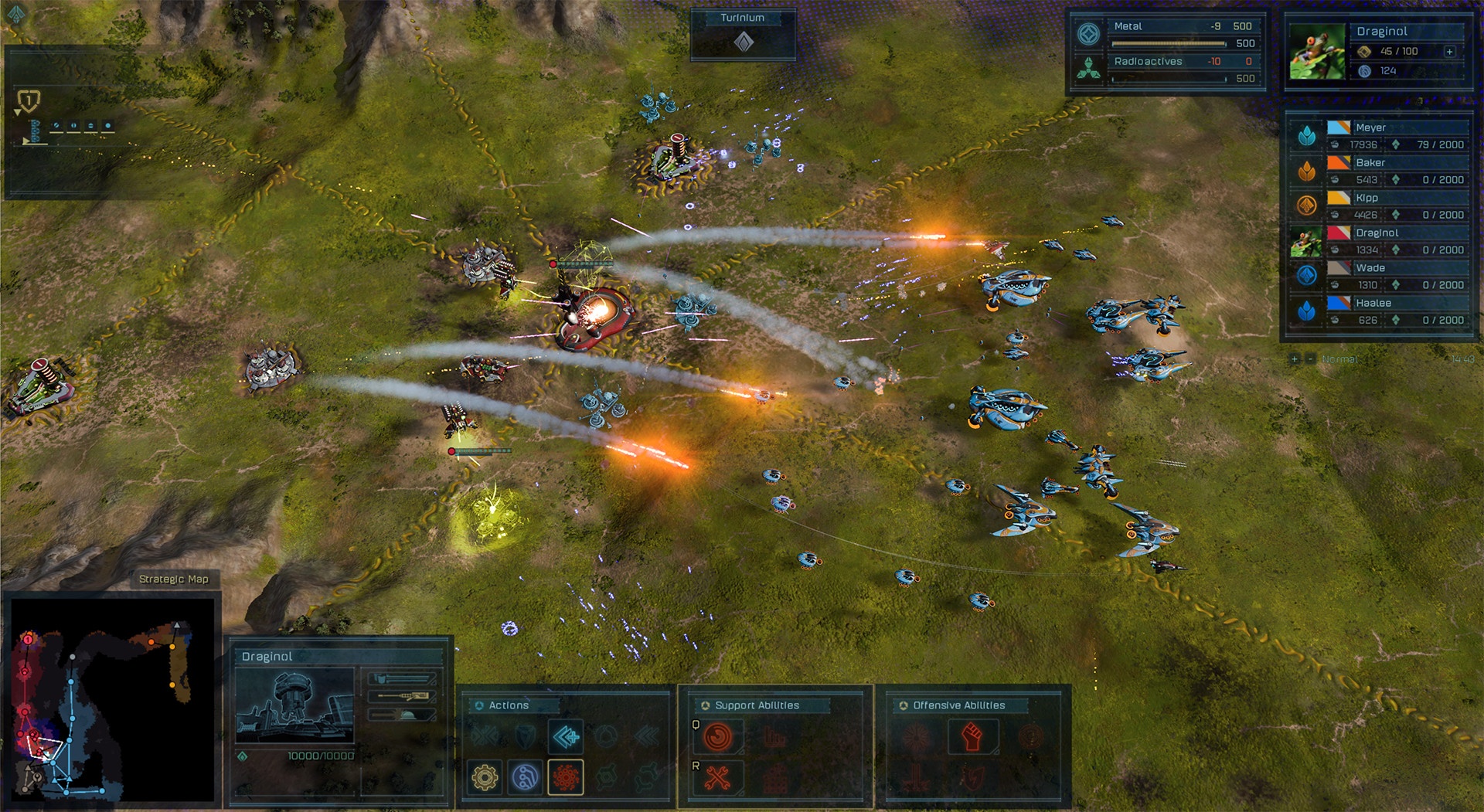 I haven’t mentioned the campaign yet, as it’s perhaps one of the game’s weaker points. There is very little voice acting and no real cutscenes or characters to get the player into the story. Boxes of scrolling text pop up every now and then, but to be honest I couldn’t be bothered reading it – especially when you know the opportunity to blow stuff up is just round the corner. Think of Starcraft’s Raynor and Kerrigan: two characters who we cared about because we all wanted them to bang! Maybe that was just be then? Anyway forget the campaign here, Ashes of The Singularity really shines in it’s skirmish, scenario and multiplayer modes.

In Skirmish mode the player can jump straight into a wide range of maps, from tiny 1v1s to gigantic 6-player stalemates. Due to the 64-bit engine, Ashes of The Singularity contains almost legendary detail in the terrain of the maps; updating in real-time to show craters from explosions and scorched skid marks from your most cowardly soldier… Multiplayer shares the same format but instead of AI, you’re pitted against actual humans. Currently players can choose between two factions, the Post-Human Coalition or the Substrate. Both factions have distinct styles (yes space wars can be fashion-conscious), with the PHC being mainly mechanical-looking whilst the Substrate’s units are sleek and rounded.

Ashes of The Singularity boasts an AI with a worryingly human touch to it. It is well documented by angry gamers that ‘hard’ AI in many RTS titles merely cheats to beat it’s human opponent; be that through awarding itself more resources or units. In Ashes of The Singularity, the AI plays very much like a human, and at higher difficulty levels it just becomes more aggressive – swearing at you in the chat feed and reporting your Steam profile. No I’m kidding, but it feels like you’re playing against another person for the most part. As a result the experience across the board of game modes is satisfying, especially when your half-baked strategies are pulled off with ease.

A major part of the strategy in Ashes of The Singularity is the capture of resource points. Each point you capture adds to your pool of available resources (either metal or radioactives). This system is a tried and tested model seen in the likes of Total Annihilation and Supreme Commander. The resource points around the map need to be guarded jealously and as a result can cause brutal firefights to erupt. When playing online I had a huge chunk of my resource points choked by the enemy, who had cut off adjacent supply points – therefore severely limiting my ability to create the massive machine-o-destruction that was about to pop out of my dreadnought factory. This in itself opens up a whole new level of strategic thinking, making for a plethora of scenarios to open in a game and extending it’s replayability. 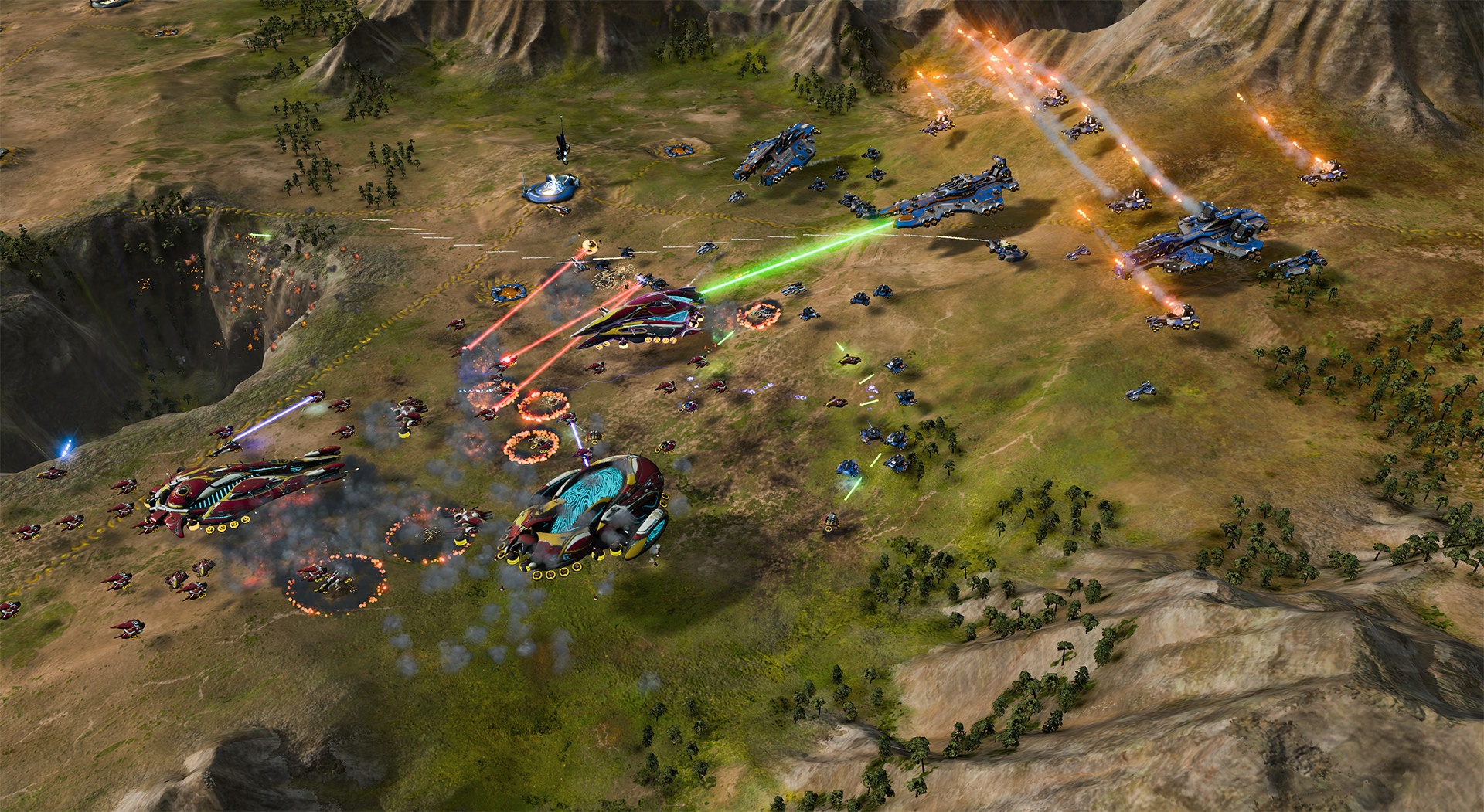 There are a large variety of units in Ashes of The Singularity, including little floating pieces of cannon-fodder, super fast aircraft, artillery, monstrous capital ship dreadnoughts and more. Plus don’t forget all the counteracting units for each of the above. That’s the sign of a great RTS I reckon, the fact that each unit is balanced by a countering force. It’s been seen the genre over in the likes of Age of Empires, Rise of Nations, Cossacks etc. Not only does a wealth of units expand the strategies at the player’s disposal, but in Ashes of The Singularity, it contributes to the feeling of total warfare. I would say however, that a lack of navy units is a little sad – although I may be biased as I come from a British Naval city!

The developers have pulled a blinder by making it possible to group units into armies. Once grouped you can control hundreds of units in a few clicks, making for devastating surgical strikes at a certain location, or by having all of your craft trawl the map in a wave of destruction. The only sticking point here is that the army will move at the pace of it’s slowest unit, so if you’ve got a rogue asthmatic ant in the midst of your fast-movers, it may well see your entire army crawling at a snail’s pace.

Earlier I touched upon the lack of immersion in the campaign. Whilst there is very little in the way of voice acting, the game sounds are spot on. Aside from the whooshing of rockets, the zap of lasers and the boom of explosions, there are a whole host of meaningful audio clips in Ashes of The Singularity. By this I mean that each unit has a certain ‘call sound’ that is made when it spawns in. In an intense battle where you’re being used as a mop on the field, being notified by sound that your new units have spawned is pretty darn useful! A nice touch to an RTS on such a large-scale.

It’s hard to rate a game such as this. Being a huge RTS fan and having played the vast majority of the ‘classic’ titles out there, I can see such a depth of greatness in Ashes of The Singularity. The problem is that sometimes that huge depth feels a little empty. I can’t put a finger on why, but maybe it’s because it’s predecessors had buckets of personality and that the concept here isn’t completely original. Nevertheless Ashes of The Singularity is not to be missed by anyone who has ever played any RTS game. It is larger than large and exciting to play, ushering in a new benchmark in real-time strategy.