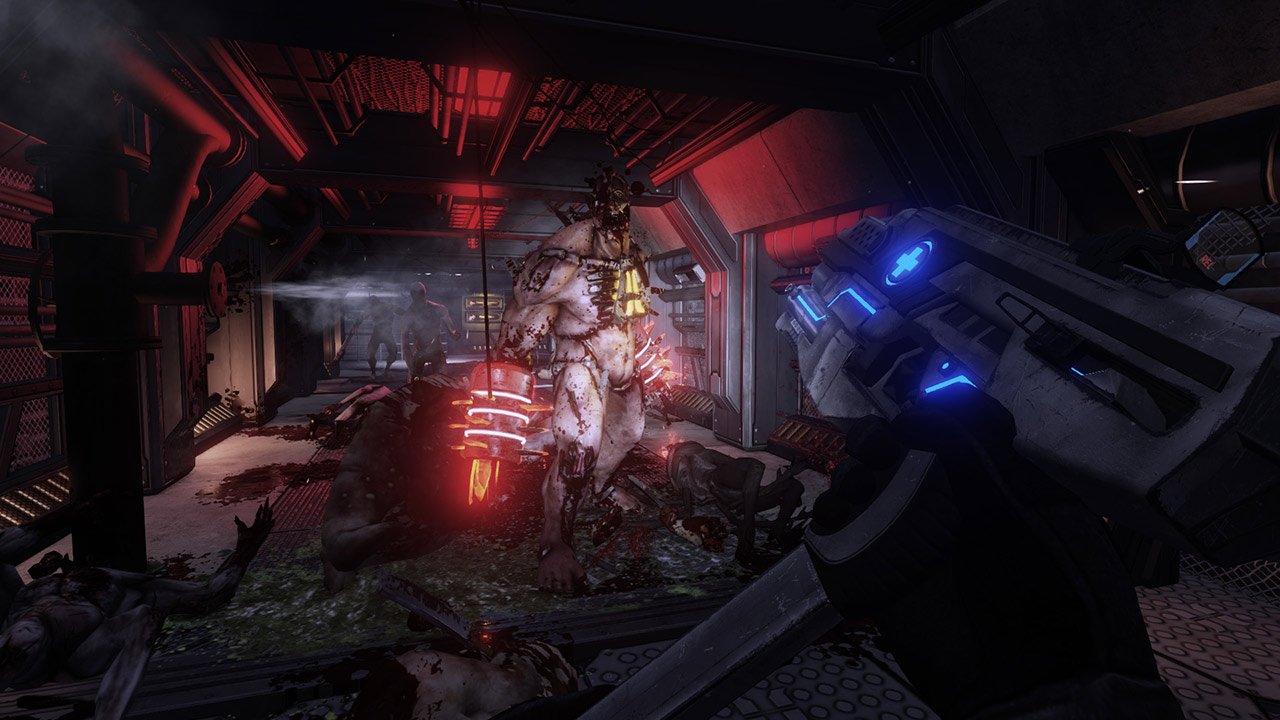 Imagine if Doom had a Horde mode or if id Software made Left 3 Dead 3. The results would almost certainly resemble Tripwire’s incredibly fun, if ultimately rather shallow, Killing Floor 2. I know, I know, Killing Floor 2 – where did the first one go, right? Well, it was originally released as an Unreal Tournament mod back in 2005 with an official retail release following a few years later in 2009. I’ve got to be honest, as a console gamer, I had never heard of the original Killing Floor (despite the fact that it went on to sell in excess of 3 million copies), but allow me to assure you, knowledge of the previous game is absolutely unnecessary. The story is…..well, there isn’t one.

Ok, there is a story of sorts, but just like its predecessor, it’s completely inconsequential and essentially amounts to little more than – ‘Scientists make bad zombie things, you and your team kill said zombie things’. That really is all there is to it, and that’s absolutely fine because, like Doom and Left 4 Dead, Killing Floor 2 is all about the gameplay. It’s all about killing wave upon wave of bad guys with a group of friends using a whole host of very meaty and very enjoyable weaponry.

Of course, with today’s gamers accustomed to the likes of Gears of War’s Horde mode and Call of Duty’s Zombie mode being part of a package that also includes dedicated single player and competitive multiplayer modes, Killing Floor 2’s exclusive emphasis on co-op, wave-based encounters might appear rather slight, and while it is to an extent, games such as Overwatch have proved unequivocally that an online game can succeed (initially at least), on the strength of limited but creatively strong content. 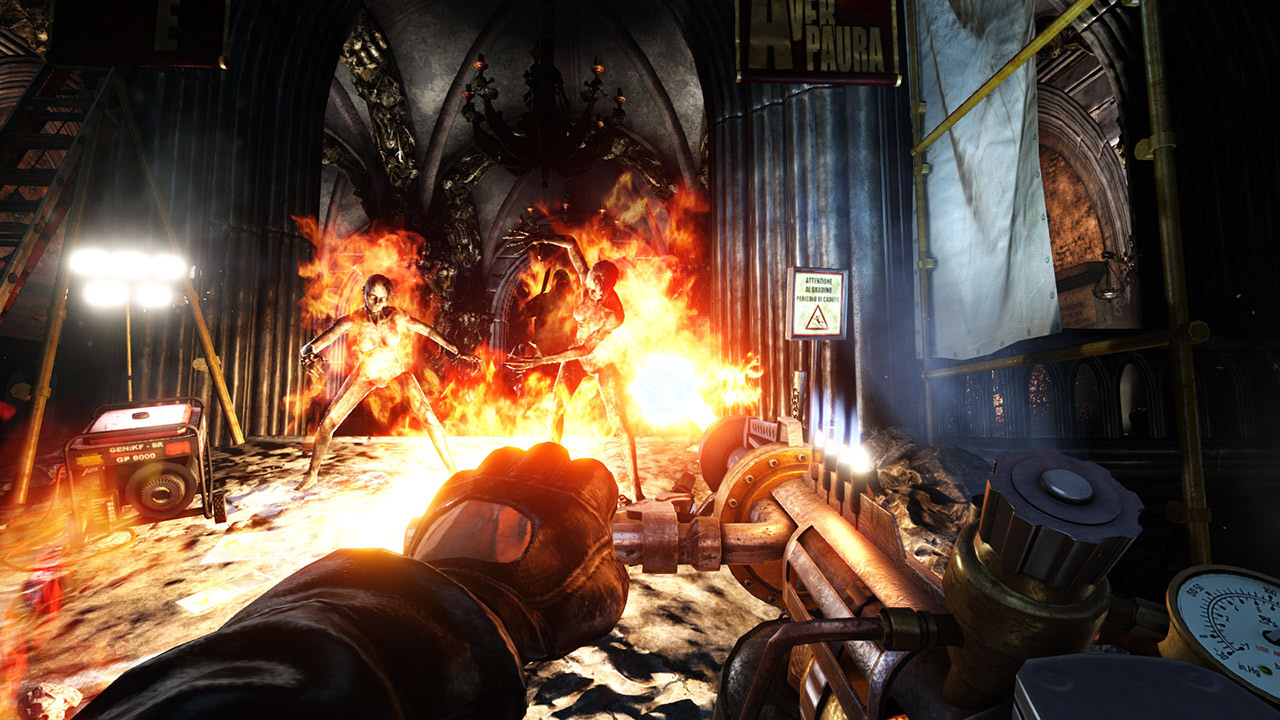 Now, let’s make one thing clear – Killing Floor 2 is no Overwatch, but despite it lacking the finesse or polish of Blizzard Entertainment’s exemplary shooter, its relatively budget price point combined with its solid mechanics and enjoyable combat make it a surprisingly appealing proposition. I don’t think it’ll be winning too many awards come the end of the year, and yes, one could argue that it has been released at the worst possible time given the abundance of top-tier shooters vying for gamers attention right now, but judged on its own merits, Killing Floor 2 probably does just enough to find its niche amidst the genre heavyweights.

A big part of that success is down to the weaponry and the outrageous levels of violence. Whether it be a melee weapon or one of the games wide selection of assault rifles, shotguns, flamethrowers and rocket launchers, the impact and weight of the weaponry makes each kill (of which there will literally be thousands) extremely satisfying. Some of the larger, bullet-sponge enemies could do with a bit more in the way of feedback, but the majority crumple, explode and fall to pieces in gloriously rewarding fashion.

And man, do they fall to bits. Not only will their limbs cover the decent selection of visually impressive stages available, but the subsequent blood from their grizzly deaths will leave the walls and floors covered with monstrous claret. That might sound par for the course for a game of this ilk, but unlike most games, that blood stays put between waves leaving certain sections of each level absolutely soaked in blood. Yes, it’s gruesome, but it’s also an oddly rewarding reminder of what you have managed to achieve up to that point. 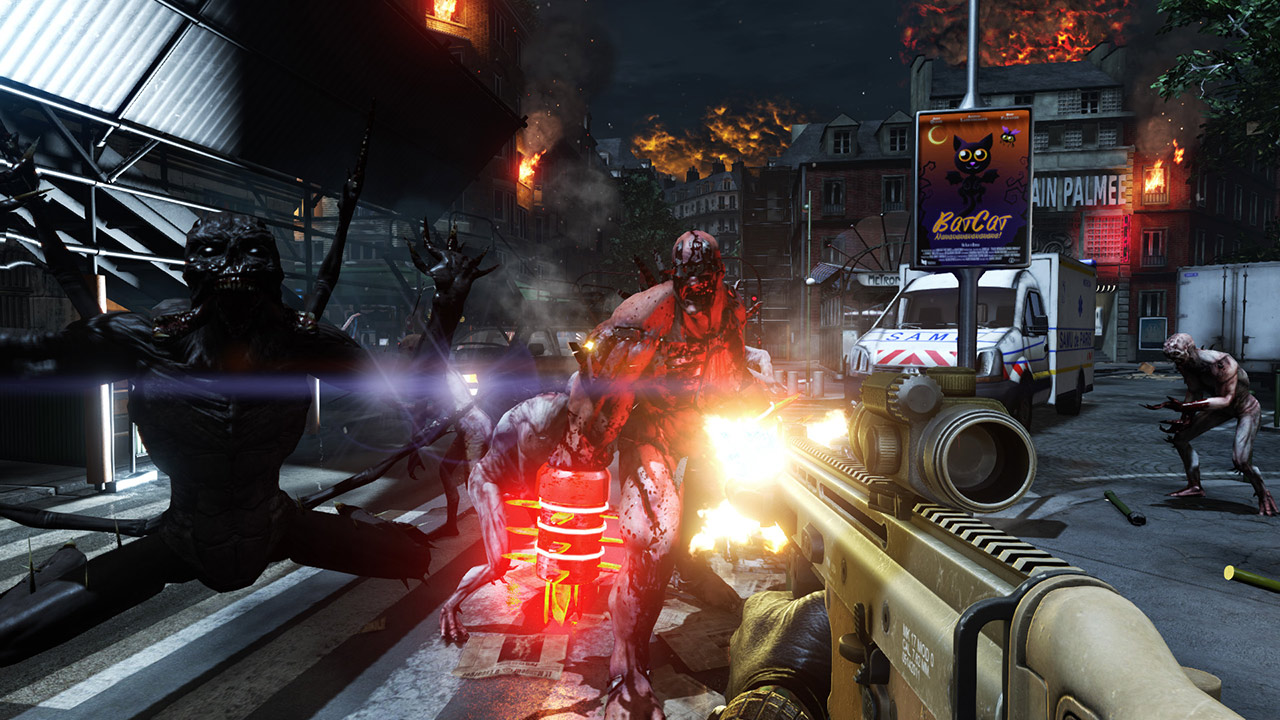 As enjoyable as the combat might be and as carefully constructed as the stages appear, the wild rush of enemies does lead to large areas of each location going criminally underused in favour of back to the wall survival tactics that will see many teams pick a particular spot and stick to it for the duration. Randomly positioned upgrade points that can be used to purchase ammo, armour and new weaponry between waves does encourage exploration, but more often than not, teams tend to return to spots that they are comfortable defending.

Beyond the mid-battle purchases, a big part of Killing Floor 2’s long-term appeal is its robust upgrade system. With plenty of abilities, an array of fully customizable characters and a host of different classes to choose from, there plenty for players to unlock as they progress, but while some of the visual upgrades are great fun, the impact of ability upgrades is questionable. Some will inevitably assist in your Zed slaying escapades, but many only outline the games’ comparative lack of refinement. It’s great in terms of delivering a brutally cathartic experience, but in terms of depth or tactical nous, the game does compare poorly next to the more polished likes of Left 4 Dead and Gears of War 4’s Horde mode. You can weld doors closed for instance, but the AI and level design never quite backs up the ability. It’s as if Tripwire have thrown in every upgrade type that they can think of without taking the time to balance them or put any great thought into how they will subsequently effect gameplay. Don’t get me wrong, all of the abilities work and the variety on offer does provide an array of unique unlockable skills to chase, but in many cases, they feel like padding for a game that is ultimately short on depth.

Despite its shortcoming, Killing Floor 2 proves a frantically fun and surprisingly addictive co-op shooter. It might lack the finesse or balance of the genre’s finest, but there isn’t a game on the market that can match it for sheer bloody mayhem. The gunplay is weighty and rewarding, and while it may be ultimately limited, regular updates and community driven content should keep fans entertained in the long run.