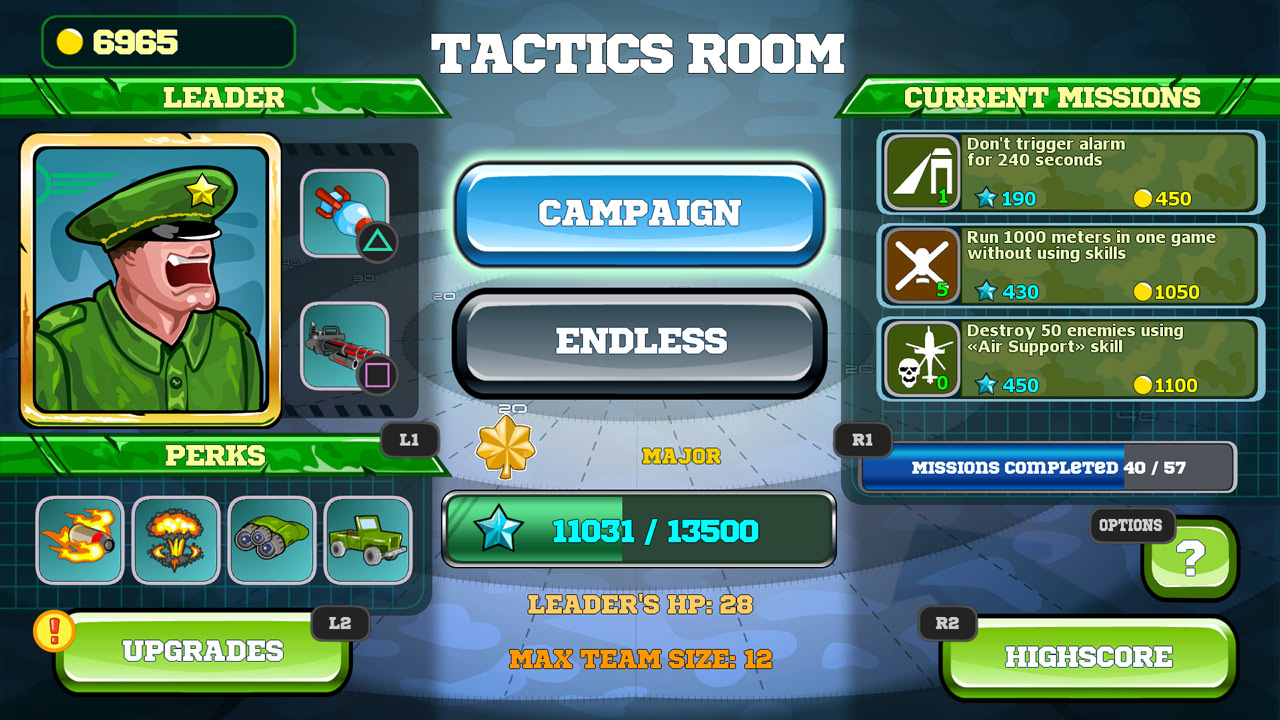 In a world where hours are lost playing the likes of FIFA & COD online or delving into the many days you’ll lose taking on Final Fantasy or Dark Souls sometimes it’s a welcome surprise to play a game which requires hardly any tactics or no plot to get your head around, that game is Battalion Commander! There are moments in life where you just want to run up screen with your squad, having no control of your weapons and try to blow everything up ahead of you.

Battalion Commander is a simple game to get to grips with, it’s a vertically scrolling shoot-em-up (the opposite to your standard side scroller shoot-em-ups). As you move up the screen you rescue other soldiers of different classes who will join your squad and help you move on up. These fellow marines can die and be replaced but you as their leader must remain in the game otherwise it’s game over soldier! The main premise is to max out your squad to give you a better chance of defeating the constant drip of foes who rain down from above. To an extent they don’t just offer firepower but also can act as a shield of sorts for yourself, you could call it Operation Human Shield……..There is also an element of level grinding because as you progress you gain experience that unlocks various perks and also money which can be spent in various ways to improve your threat. Additionally there are missions to be completed that give further increases in your experience and money banks. As you get more experience you improve your military career, so you start off as a private with the aim to reach the level of Colonel. 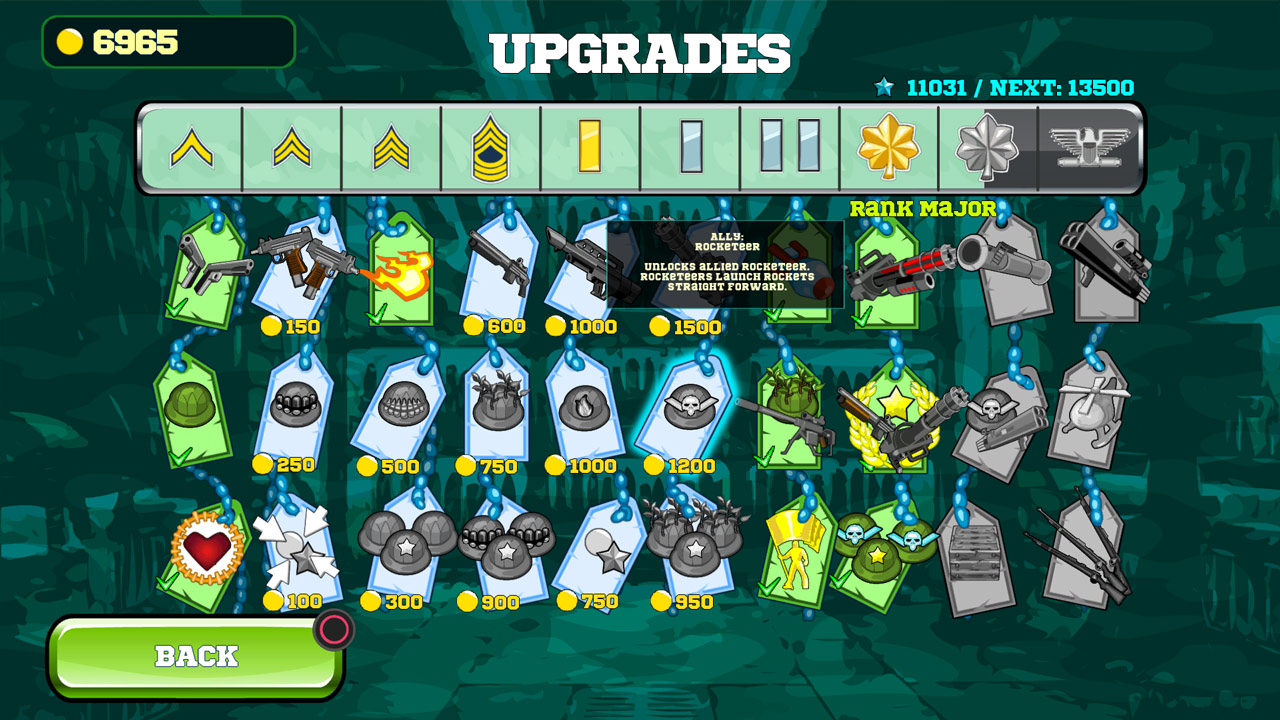 There’s no plot in Battalion Commander besides having to venture up north to defend the Motherland. The kind of squad you amass includes flamethrowers and grenadiers who themselves can have their weapons upgraded. Some of the perks such as additional speed or starting off in a jeep are very helpful in your fight against whoever it is! The range of enemies is quite varied, you come across riflemen, flamethrowers, snipers, tanks, helicopters and hidden defenses.

Battalion Commander is less about tactics and more about brute force, you just persevere until you reach the end or get killed. As you don’t have control over your squad (the marksman can shoot anywhere but you don’t control that)they just randomly shoot in whatever direction you’re facing, but bear in mind you can only shoot forward. This can make Battalion Commander harder than it should be especially if you happen to move past a flamethrower enemy who is able to burn a squad to a crisp very easily but you can’t hit them. Luckily you can run into enemies and stab them but obviously this makes it easier for them to hit you. Battalion Commander would be infinitely better if you could auto shoot left or right but you can’t so it’s just plain discouraging. 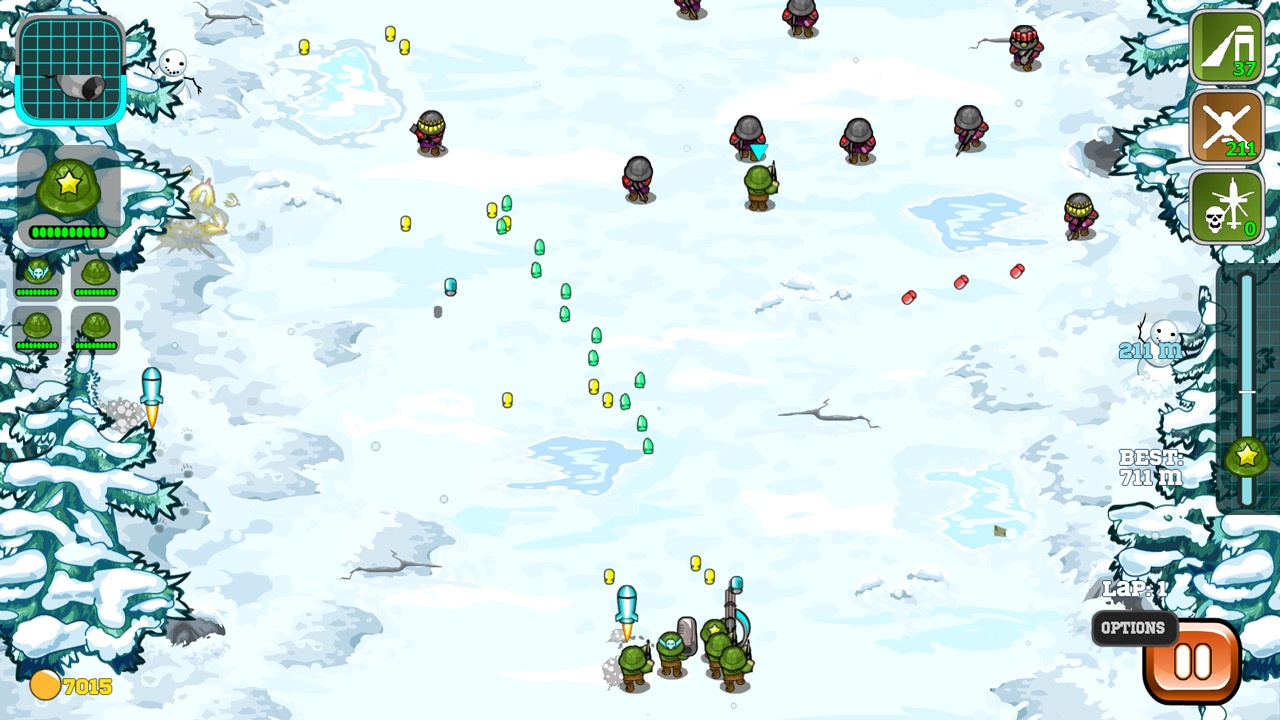 Battalion Commander is not an easy game to master, you will die a lot because as you gain heavier weaponry and better perks the opposition appear to gain in numbers. This difficulty curve takes a little getting used to but it’s not frustrating hard to progress it just requires some patience. There is one area that is particular annoying and that’s the hidden turrets that appear. It’s fine for them to come out and shoot at you but the amount of times you try to move forward and walk into one as it emerges (effectively killing you instantly) is more frustrating than it should be. Graphically Battalion Commander is fairy basic, your green little army is fairly indistinguishable on a bland snowy surface as various indistinguishable red enemies attack from above. Battalion Commander can get quite messy as a deluge of enemies fill the screen with lots of bullets and bombs so it becomes abit for a free for all at those stages.