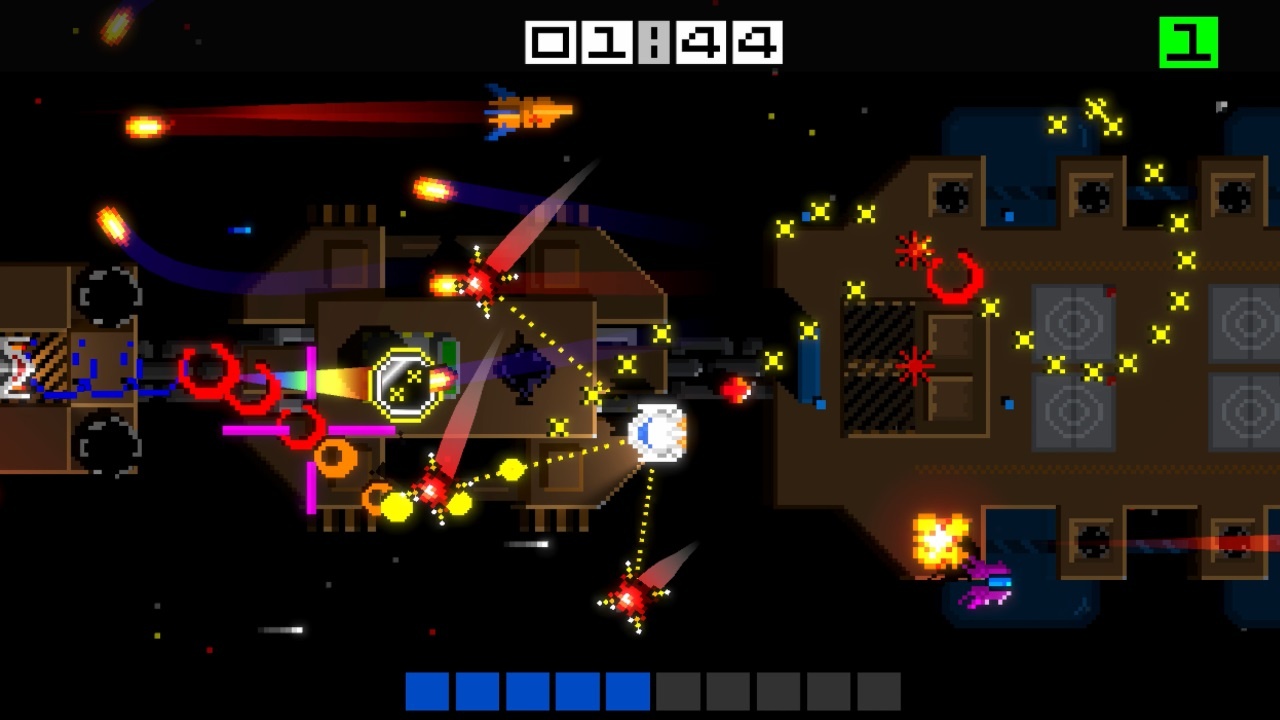 Growing up playing lots of Commodore 64 games at friends’ houses, I instantly was taken back the moment I played my first rounds of Hyper Sentinel. Everything in that game is a homage to a different time and stands apart from other retro games that try to mirror 8 or 16 bit consoles nowadays. It’s the raw unfiltered pixel art style, the simple controls and music and sound design that would make every dying SID chip proud, that stand out and make this small indie game a gem to be reckoned with.

Mirroring the gameplay from old C64 top-down, arcade shooters like Uridium, Hyper Sentinel adds some 21. Century game-play panache to the old formula that’ll make you want to try harder every time you’ll see the Game Over screen. And that will be a lot. From a top-down perspective your small fighter is facing a massive behemoth and it’s cohorts in self proclaimed face-melting action. Your goal is to obliterate every destroyable object on said space ship to then face a boss, here named guardian, which will need you to adapt a certain tactic to get rid off. 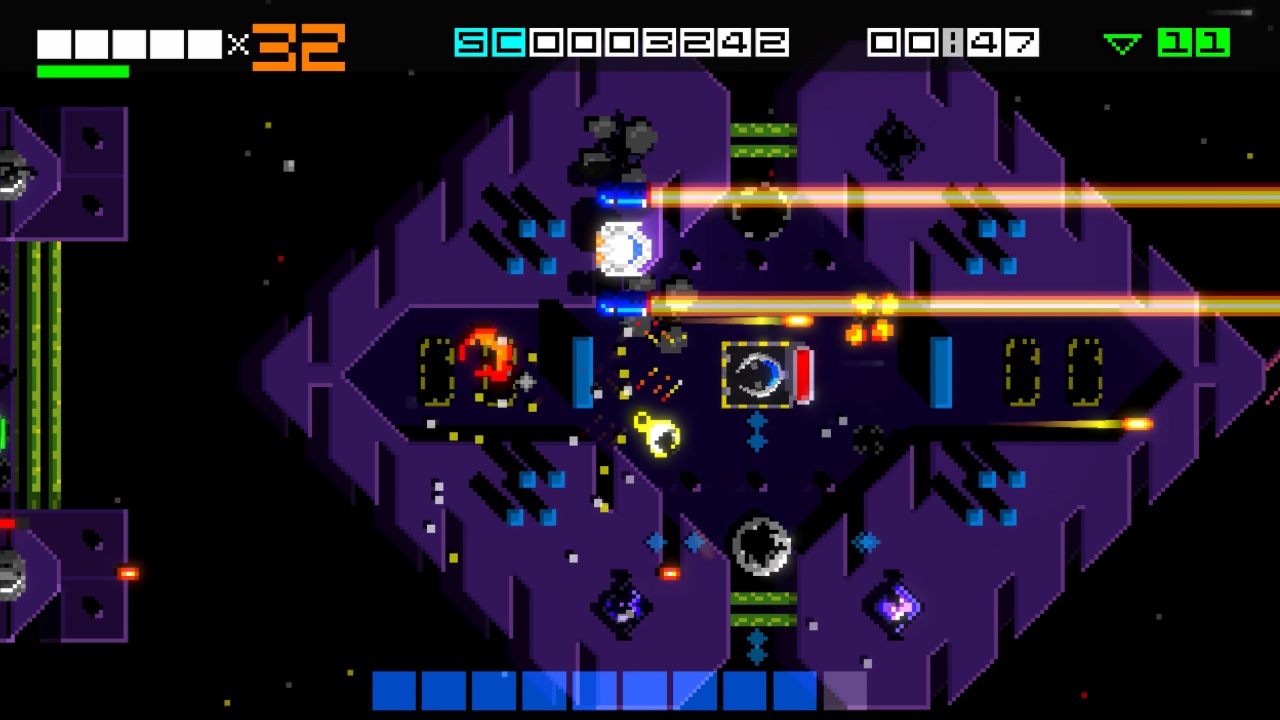 Power-ups will help you and are essential as your standard lasers are okay against objects and smaller ships but more elaborate defense mechanisms and guardians require that extra power-touch from power-ups. Shoot down smaller, special fighters to gain extra energy that you will desperately need in order to be successful, especially during the later levels. Fighting the 24 massive space ships will inevitably leave you frustrated every once in a while but trying different strategies after failure can be very rewarding. If you are up for leaderboards and high score hunting, Hyper Sentinel has got you covered. Gain points and multipliers during a mission and compare your grand score against your petty, noob friends’.

Having completed a mission, you will then be able to play the same mission again with different modes. In Survival mode you fight against the clock, a barrage of small fighters and the defense system of the main ship. You will have to survive for 90 seconds. This time, however, you are equipped from the beginning with a special weapon and the distribution of power-ups is more generous than before. Don’t be fooled though. This is still a challenge. Hyper Sentinel is a very fast game and you need the reflexes of a Jedi to get out of tricky situations. The third mode is the Boss mode, which is, like the name suggests, the boss battle at the end of each level. Hyper Sentinel has three different difficulties that can only be unlocked if the mission and respective mode has been mastered beforehand. Different difficulties, modes and leaderboards greatly enhance the re-playability of Hyper Sentinel. 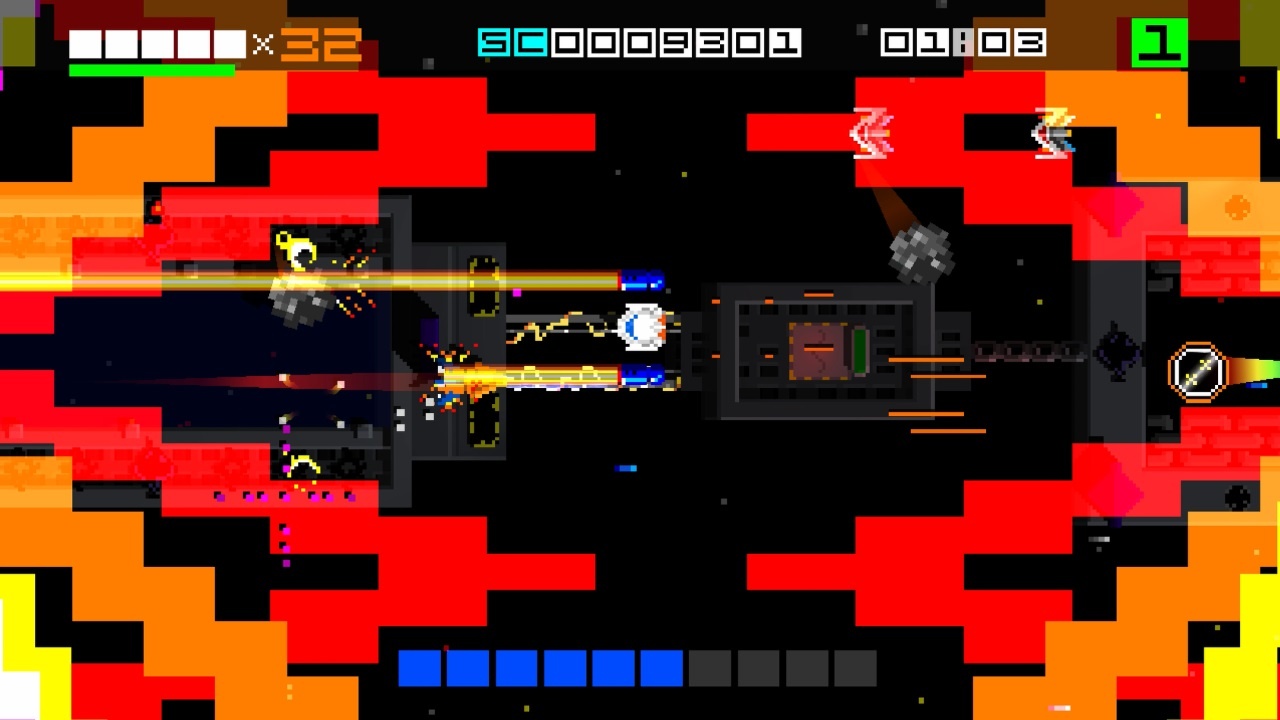 Visually speaking, it is a one way ticket back to sprite-town with great design choices that would feel right at home on a current-gen console as well. No posh light effects or perfectly rendered shadows are tainting Hyper Sentinel’s art style, however resolution and frame rate are as smooth as monumental alabaster (shout out to my man Shakespeare for that simile). Shooting up stuff in 60FPS just feels right. If you’re up for a total retro overload you can activate (ACTIVATE!) some of the filters which will give you scan lines and other shenanigans. Everything audibly perceivable in Hyper Sentinel fits. The music and sound effects are most probably not created with an old SID chip but they certainly sound the part.

Looking back, I had a blast with this game and will keep playing long after I have finished this review. If you are up for a retro challenge with fitting visuals and if you are into top-down, arcade space-shooters pick this one up!