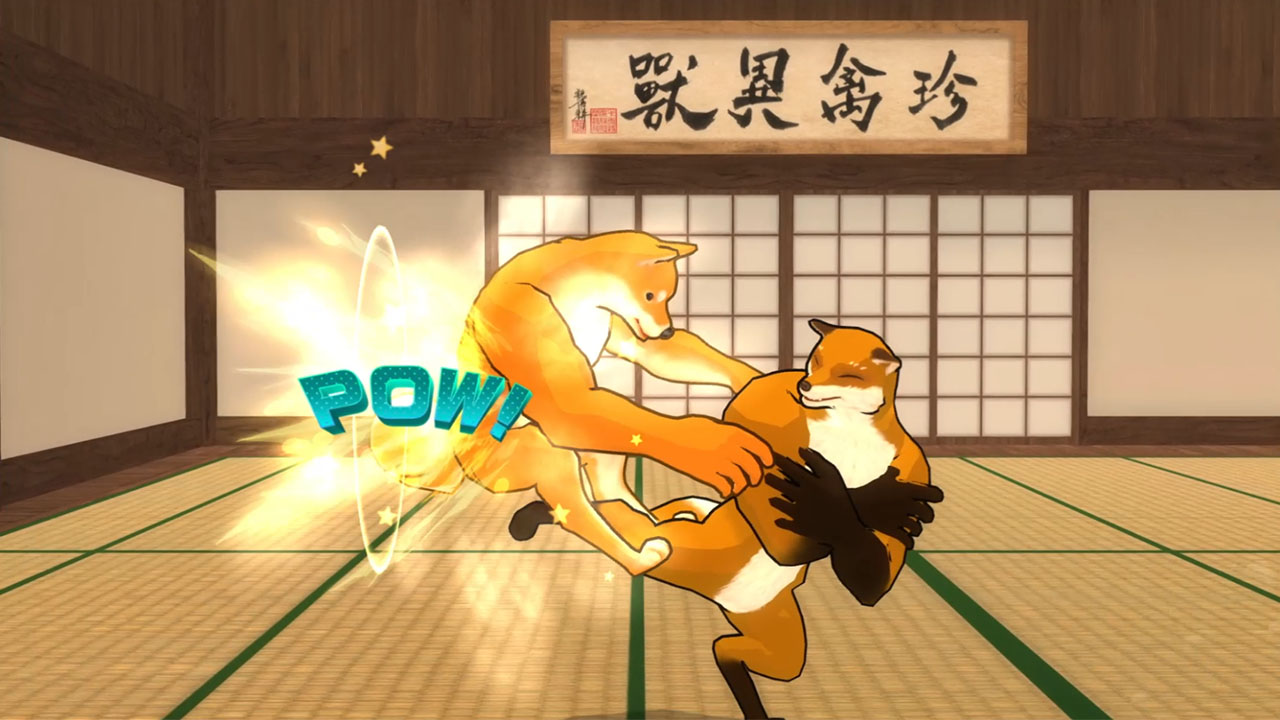 Fight of Animals may well be the quickest turnaround for doing a review. That sounds a bit ominous as that could spell disaster: is it a game worth playing, or is it over too quick? As a beat ’em up, even the feature-packed titles are quite sparse with storylines and the odd survival mode here and there, but Fight of Animals is quite short-lived when it comes to solo play.

As a one-on-one fighter, you have a selection of animals to choose from – all of which are available to play from the outset. These animals aren’t the common tortoise or budgie going toe-to-toe, but steroid infused chimaeras from a beefcake puppy to a crow/gorilla fusion. Expect a few species here that Mr Attenborough has never heard of. There’s eight in all, and while they have a signature finisher, they are all relatively the same when it comes to play style, though their animations differ – mostly due to the elaborate designs.

Opting for the dog, I had my tail served to me within seconds by a cat. We all know that the internet is run by cats, so starting again, I chose the dog and faced the Muscle Beluga. Yet again, the first round was immediately over with the dog in the dirt. The AI was relentless, and while there wasn’t any such juggling going on, there wasn’t a single opportunity to defend the attacks. The defence here is a little on par with the classic Street Fighter II as all you need to do is move away from your opponent to block automatically, but during the split-second animation sequence, I’d get clipped with a flurry of attacks. 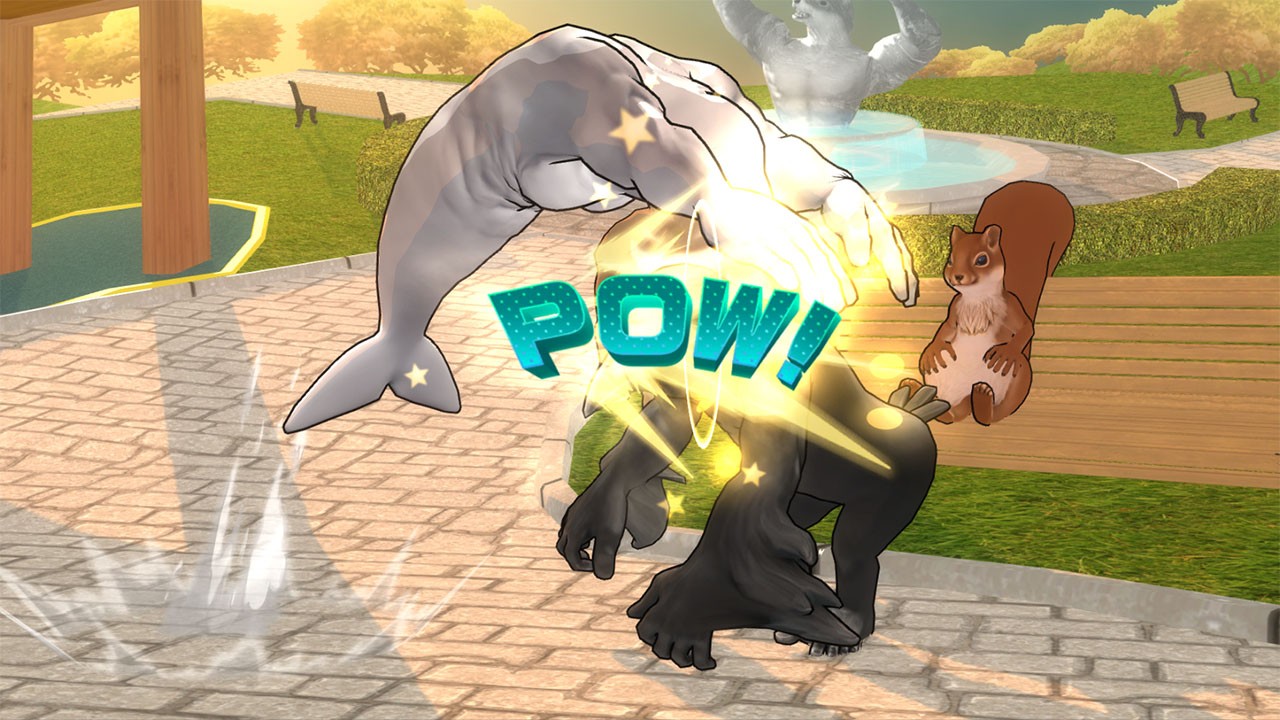 Then it occurred to me that the difficulty was set to very hard. Was this the default, or am I a victim of joy-con drifting? Dropping this down to normal (there are five levels), I was able to find my bearings, and in a short period was getting perfect victories. This was only evident as the AI hadn’t had a chance to hit me and the health gauge remained the same, but there’s no notification such as a ‘flawless victory’ or ‘perfect’. Fight of Animals feels like it’s rushing you through the game to finish as quickly as possible by removing all story elements and opening banter from opponents. The reduction of combat to a very straightforward set of button-mashing techniques and pushing you through the door back to the menu to repeat the process seems a bit half-baked.

Unfortunately, there’s no incentive to keep playing other than to master a particular character. Though their move sets appear different, there’s not that much to differentiate them from one another, other than the character design. They all look good; there’s no question. The Slender Cat, in particular, was excellent as you see human hands propping it up at the start of a round, then you have the less effective Egg Dog or Magic Squirrel. The locations differ but feel a little limited and uninspiring – having a Christmas theme that regularly occurs is also a bit strange, and Fight of Animals would have benefited from a bit more variety or even interactive elements. Don’t get me started about the music, however. It’s like elevator music, and supermarket ambience had a baby and raised it on cheese, speed and hate. Totally out of place in the game – only the menu music is bearable for me. It’s like listening to Metallica while playing chess. Scratch that, I’m down.

So with all these negatives, Fight of Animals sounds like a dud and one to avoid, right? Well, not really. The actual fighting is straightforward for anyone to pick up – stripping out any complexities that confuse your non-gaming or beat ’em up fans. Though they wouldn’t last a round if set to the default mode – it would need to be set to easy or very easy. Anyone can play, but given the levels of difficulty, Fight of Animals can be incredibly tough, and therefore offers a lot of challenge. Just don’t expect any rewards when it comes to unlockables or in-game achievements as there aren’t any. The real selling point for Fight of Animals is the multiplayer aspect. 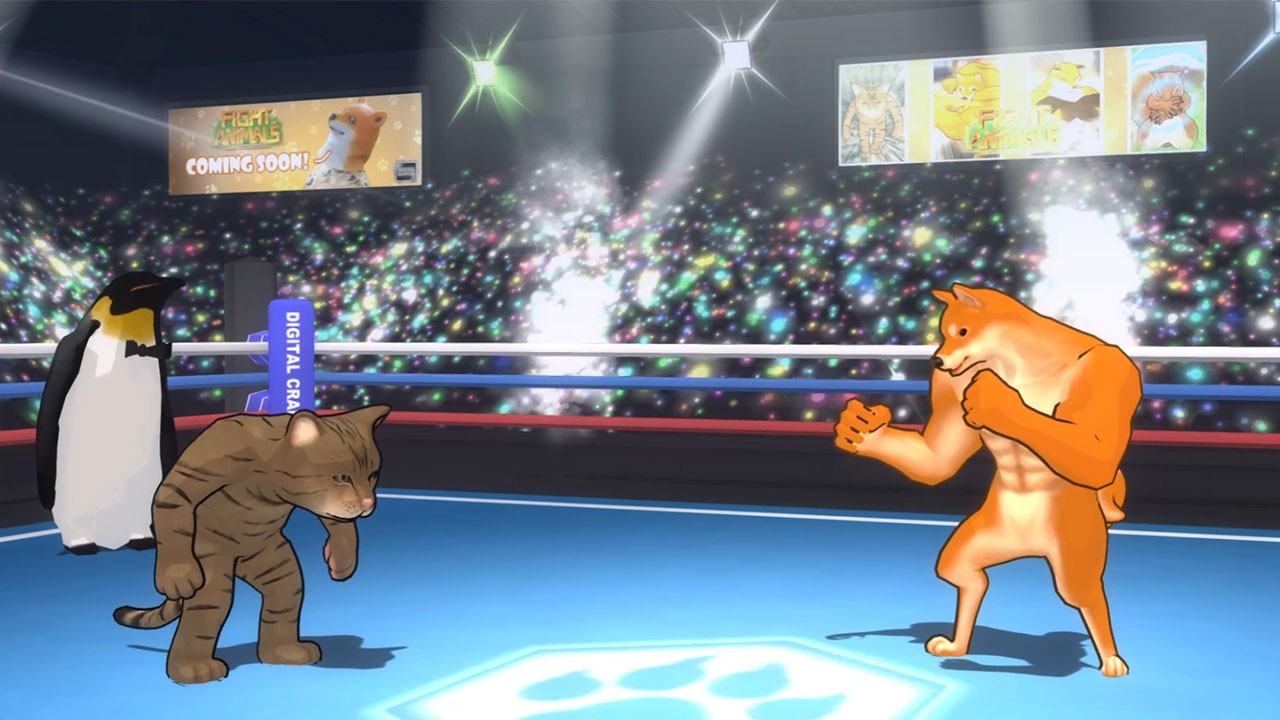 As an early release, finding other players online is more miss than hit as there simply isn’t the volume of other challengers yet, plus the different timezones (reviewing a game can often go into very unsociable hours!). Therefore, this review focuses on the local multiplayer side of things and… it’s not bad. Local play always depends on who you play against, and luckily for me, it was an enjoyable experience. Whether the online mode fairs as well, I don’t know. The gameplay is quick and relatively tidy. However, due to the ease of pulling off a special move (fill the gauge shown on screen then press the B button), animation sequences are frequent and slow the pace down. After seeing Crowilla throw whatever it is at an opponent for the fourth time in one round, Fight Of Animals gets old.

I finished the arcade section in one sitting. My experience was mostly replaying different characters to find my preference, and then use that advantage to beat the other person I was playing. Whether Fight of Animals will garner enough interest for fight fans is debatable though as there’s not much on offer other than the unique take on fighters. Is that enough? Not really. Fight of Animals is slightly above average.

A beat ’em up best played locally, or online at some stage than a solo story campaign – but that’s most beat ’em ups. However attractive the characters may be, the lack of background, variety of moves and number of characters isn’t enough for this to be a go-to title. An interesting concept, but cannot pull off the finishing move.