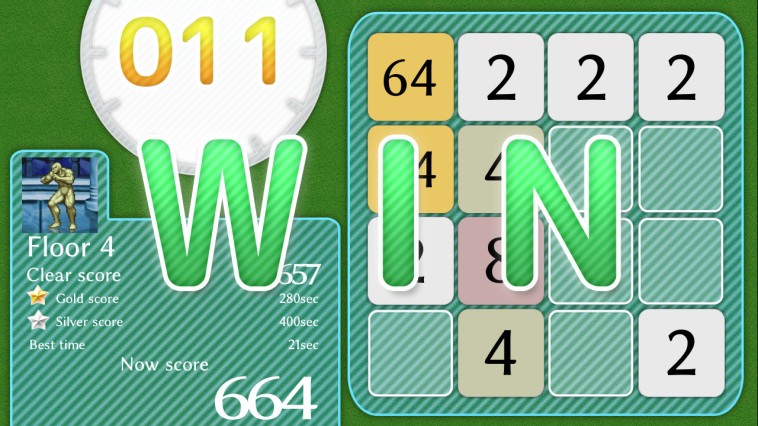 If at first you don’t succeed, try, try again. I’d like to think that Collavier Corporation has that motto emblazoned proudly on plaques all over their office,encouraging their creators and designers to keep up their chins and continue to crank out titles in spite of any shortcomings their previous releases may experience. Physical Contact: SPEED was, to say the least, not my favorite Switch game so far, but I wasn’t about to hold that against them for future ideas. So when I saw Physical Contact: 2048 was next on the menu, I did my best to consume with a fresh palette and open eyes throughout.

Physical Contact: 2048 is Collavier’s interpretation of the wildly popular puzzle game, 2048. The idea is to slowly match number 2 panels to make number 4 panels, then match 4’s with 8s, and continue till you make a 2048 panel. You can only match same numbers (very akin to Levels+), so the process is meant to be initially fast, then gradually slower as you have to make potentially thoughtful decisions to compensate for the increasingly cramped game board. Most everyone has played some version of 2048, especially given that it’s free to play on many websites and countless smartphone versions of the game have been created. It’s fine, it’s not a bad idea whatsoever, and Collavier has done their best to add a little something to the idea. 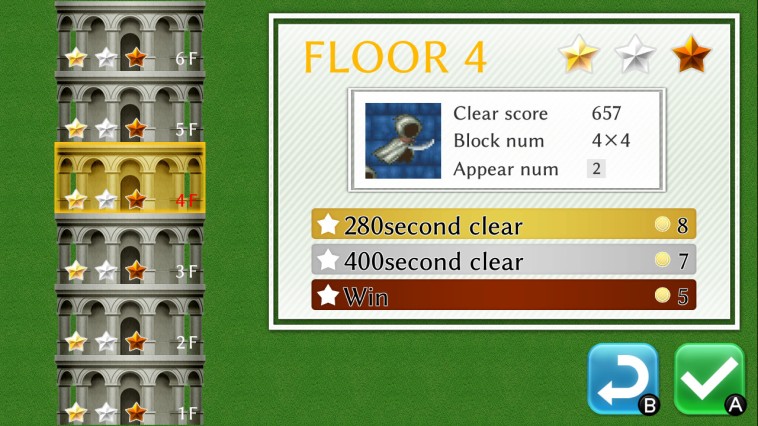 First and foremost, you have multiple ways to play the core game in Physical Contact: 2048, both the strange “tower mode” that the Physical Contact series has, as well as different ranked timed attacks. The timed attacks have different goals (you can go as low as 512 for the target score), so you can really push yourself for either crazy fast speeds or some truly longform gaming (highest goal is 4096). Everything is, again, button controlled, so get comfortable with the directional buttons because that’s your only choice. I still don’t understand the bizarre choice to have touch screen options for only menu selection (including, again, THE ONLY WAY TO CHANGE THE LANGUAGE), but at least buttons make sense for playing Physical Contact: 2048.

The tower mode is…weird. Since they can’t exactly just have 2048 be the goal for each and every of the one hundred levels, they set the bar for the target score relatively low and then gradually increase it throughout each level. A good interpretation, but the result is a rather silly first ten levels, with the target score being achieved by just having the total number visible on the board. So, sure, you could work out a strategy to get the highest tile possible in a short amount of time, or you could just mash buttons wildly, forcing numbers to pair by accident until you get the score needed. I used legit thinking at first, and then I got almost all the way to 10 by entering the Konami code over and over again until I finally was forced to abandon that practice. But at least I got plenty of coins for my avatars and backgrounds. The shopping mode is back, and it’s almost exactly the same as Physical Contact: SPEED, but without the luxury of different card backings. I can say, unironically, that the shopping system is worse here. 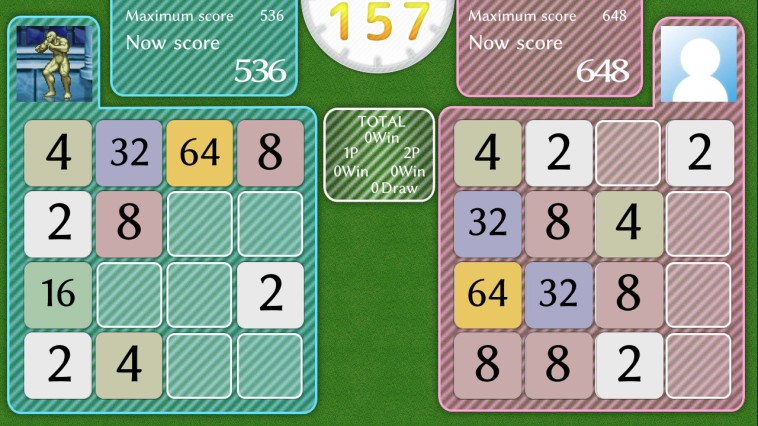 Two player mode is alright, considering it’s nothing I would have thought about for a concept like 2048. Physical Contact: 2048 is at least inventive by having the two players compete to see who gets to 2048 first or who gets knocked out last, but they made a weird choice by including the slider they used in their SPEED release. The slider made sense in a game like SPEED, even though it was poorly implemented (only one bar, so it was one person fast, one person slow, or two people neutral), but it felt even stranger here on Physical Contact: 2048. The neutral setting is still slower than you normally move in single player mode, so two people who are accustomed to playing the game will find it frustrating to be lethargic in their choices. You can speed someone up to a natural rate, but the tradeoff is the other person is trapped in molasses. I concluded this only makes sense if you’re playing 2048 against someone who likes it and is terrible or you’re trying to convince someone to play a game with you and you don’t mind losing. It’s bizarre, in any case, but having the competitive nature being brought to 2048 is inventive, if nothing else.

My overall conclusion is that this is a step in the right direction. If Collavier is going to continue taking simple concepts and bringing them to the Switch, then they should at least do games that don’t have an easier, better way to be played outside of a video game. Physical Contact: 2048 is currently sitting in a good niche spot for the Switch. There’s no web browser, so the game can’t be played online, and it’s a decent time killer with a novel two player approach. I think they need to clean up their menu and interface, however, and it wouldn’t kill them to get some better assets for purchase through the weird coin store. Also, please, add a second slider to the speed so that players can choose independently. Hopefully the next Physical Contact entry will have some kind of game that actually has contact. I wouldn’t be mad at a dodgeball game, hint hint.