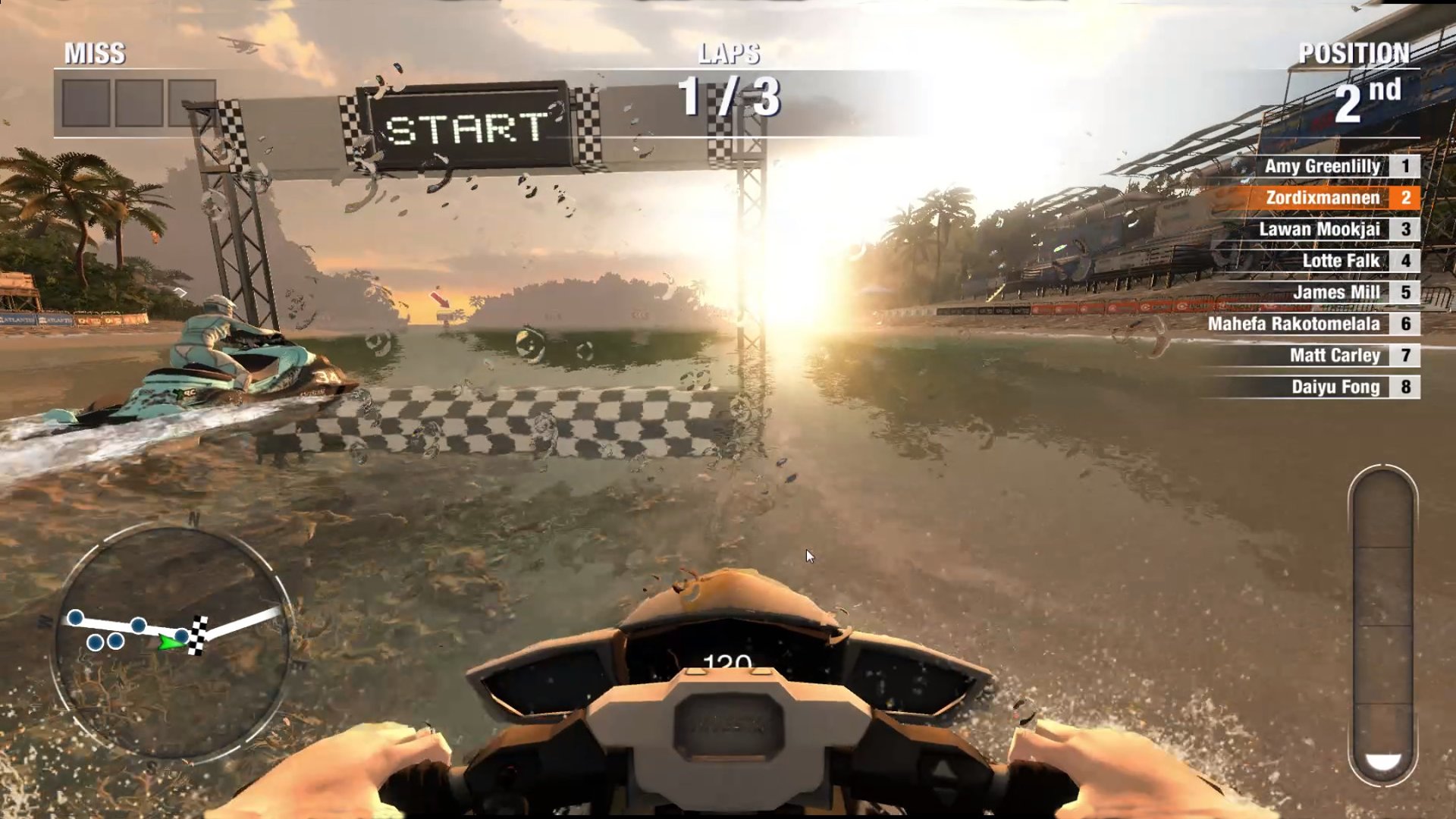 Whether it be for financial or creative reasons, Nintendo seem incredibly reluctant to release modern day follow ups to many of their most beloved racers. Sure, you’ve all heard the internet bemoan the lack of a new Metroid, but what about a new Wave Race and F-Zero? We haven’t seen anything from either series since the GameCube era, and as a big fan of arcade racers, I feel their absence just as much as Metroid or Burnout (I know that’s another arcade racer, but come on, who doesn’t want another Burnout!?). F-Zero GX is one of my favourite racers of all time and while many have especially fond memories of Wave Race 64, I was a bigger fan of its follow up, Wave Race: Blue Storm. Along with Star Wars Rogue Squadron II: Rogue Leader, I picked it up at launch after which it became a perennial multiplayer favourite amongst me and my friends……that was in 2002. 15 years ago! We are at the point now in which an entire generation of gamers have not had a new Wave Race or F-Zero released in their lifetime. I don’t know about you, but to me, that seems a little crazy.

Luckily, it also seems a little crazy to a number of modern day developers who grew up playing this type of game. After Shin’en’s utterly fantastic, Fast Racing Neo gave us a glimpse of what a modern day F-Zero might look like on Wii U, Zordix AB have stepped up to the plate to deliver the closest thing we have got to a Wave Race sequel in quite some time. It arguably lacks the finesse and polish of Nintendo’s genre defying racer, but Aqua Moto Racing Utopia (despite the truly terrible name), proves an enjoyable, solid and feature rich take on the jet ski racer sub-genre.

Despite a reasonable selection of online options, thanks largely to the mostly desolate servers, Aqua Moto Racing Utopia should be approached as a primarily local experience, but while the lack of a notable online infrastructure might disappoint some, the inclusion of a very solid selection of single and local multiplayer options more than makes up for any perceived online omissions. 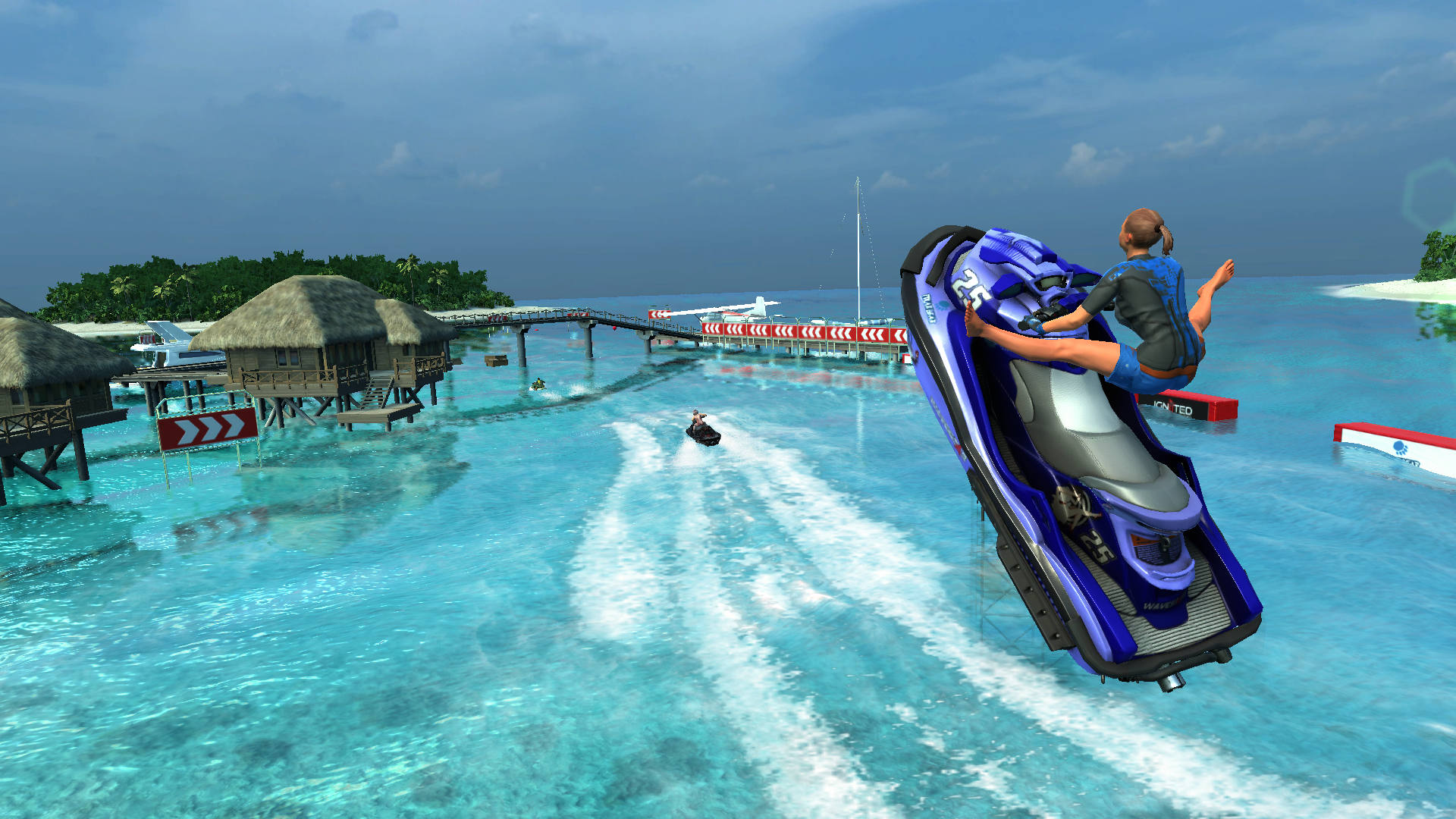 After creating your very limited avatar and taking on the basic but admittedly useful tutorial, you are given the option to get started on the games’ three separate Championships. There are two traditional racing championships and one freestyle event aimed squarely at pulling off stunts on one of the games’ lighter jet skis. Each Championship is made up of a number of individual events that cover the games’ impressive collection of 45 tracks set across the 10 separate locations available. None are hugely memorable due to the games’ apparent unwillingness to completely embrace its arcade roots, but there is certainly plenty of variety with each location benefitting from Aqua Moto’s place on the PS4.

The tracks are universally decent and there are plenty of different waves to contend with based on the location and weather, but none stick in the mind in the same way that the best courses from Wave Race did. Equally, while the water effects are fine, they don’t have the same impact on races and, despite the 15 years difference, do not feel as effective or as impressive as they did in Blue Storm. Again, there is nothing to actively complain about here, it’s just lacking that bit of magic when compared to its most obvious form of inspiration. The bigger disappointment however comes from the games’ unwillingness to commit to the absurd. Sure, there are plenty of dolphins knocking around and there is no doubting that the game is indeed colourful, I just wish they had turned everything up a notch. Commit to those Sega blue skies, turn up the absurdity, add more colour – Aqua Moto is undoubtedly an arcade racer, it just could have done with a greater sense of commitment – a greater sense of exaggeration.

Still, despite these criticisms, there is no getting around the fact that I had a great deal of fun with Aqua Moto Racing Utopia. The handling is responsive, the content impressive, and despite the waves being somewhat inconsistent, the addition of a Freestyle stunt mode does provide a successful change of pace from the core racing. Really though, as decent a distraction as the stunts might be, it is the racing that will ultimately provide the long-term appeal. The handling is solid and the boost system largely successful. Stunts provide a temporary boost, but it is the minor boost associated with sharp handling that is more likely to prove the difference between finishing 1st or 4th with tight turns close to the colour-coded buoys providing that brief boost of speed out of the turn that often makes all the difference. 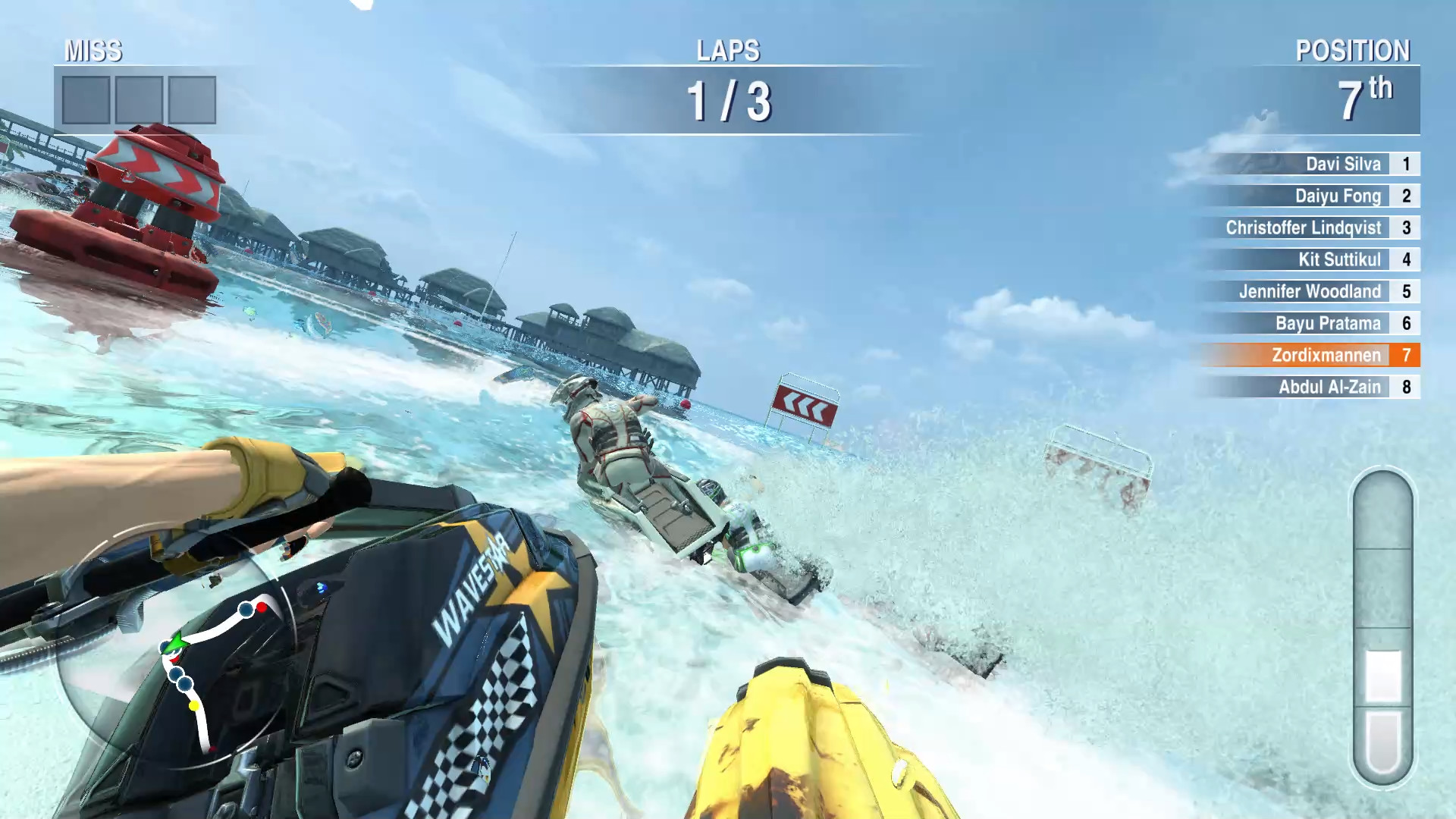 Rather than just racing, each track is also home to a host of collectibles that will provide the currency required to unlock the games’ myriad of courses and additional vehicles. The difference in handling is admittedly limited, but they do provide a carrot to chase as you progress through each Championship event.

Outside of the Championship mode, there are a variety of time trial and stunt events to keep you busy. More excitingly however is the addition of four player split screen multiplayer that includes a host of enjoyable mini game distractions such as Hold the Flag and King of the Hill. None are as enjoyable as the core racing, but they do highlight the developer’s much appreciated commitment to providing a fully-fledged selection of local multiplayer content.

It lacks the finesse and charm of Nintendo’s Wave Race series and could certainly do with turning up the colour and spectacle a notch or two, but despite its issues, Aqua Moto Racing Utopia arguably stands as the finest jet ski racer since Nintendo’s last foray into the water back in 2002. At £25, it’s not particularly cheap, but with plenty of content and some very enjoyable core mechanics, Aqua Moto Racing Utopia will be worth it for those with fond memories of Nintendo’s exemplary jet ski racer.