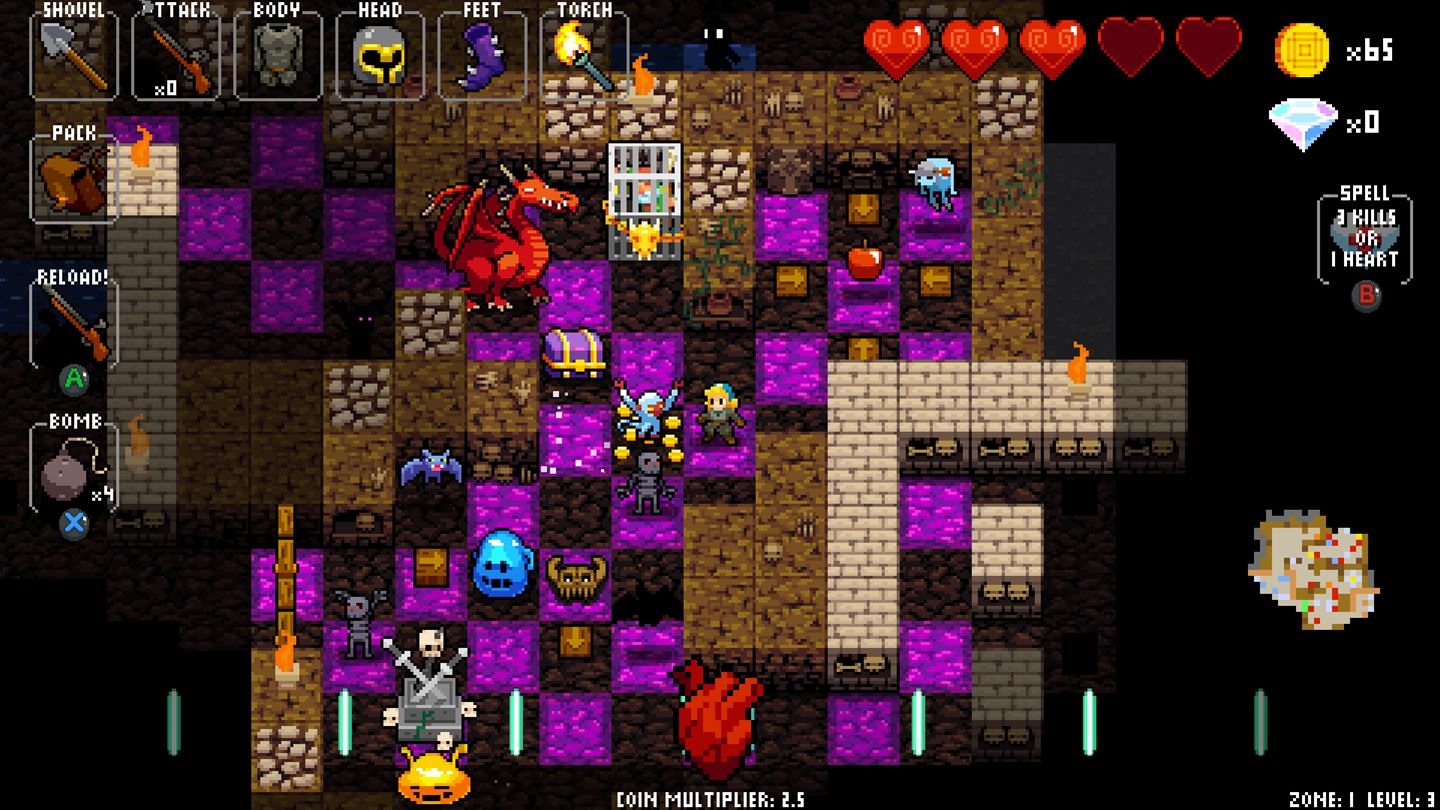 The roguelike and rhythm genres might not appear the most obvious bedfellows on the surface, but Brace Yourself Games have proved unequivocally to the contrary with the occasionally frustrating but often brilliant, Crypt of the NecroDancer.

A retro-inspired dungeon crawler, NecroDancer has all of the hallmarks of a traditional roguelike with insta-death, high levels of difficulty and purposefully obtuse design all making their now customary appearance. What sets it apart from its peers however is its music – it’s incredibly catchy music. A contemporary chiptune-laden soundtrack probably isn’t what comes to mind when you think of a medieval-inspired dungeon crawler, but here, it works. It makes no sense of course, but yeah, it totally works.

From the alternating disco flashing floor tiles to the singing shopkeers, none of this game makes any thematic sense, but in practice, this combination of medieval roguelike and fast-paced rhythm game proves to be a compelling coming together of disparate genres that combine to create something that is both unique, addictive and, perhaps most importantly, a huge amount of fun. 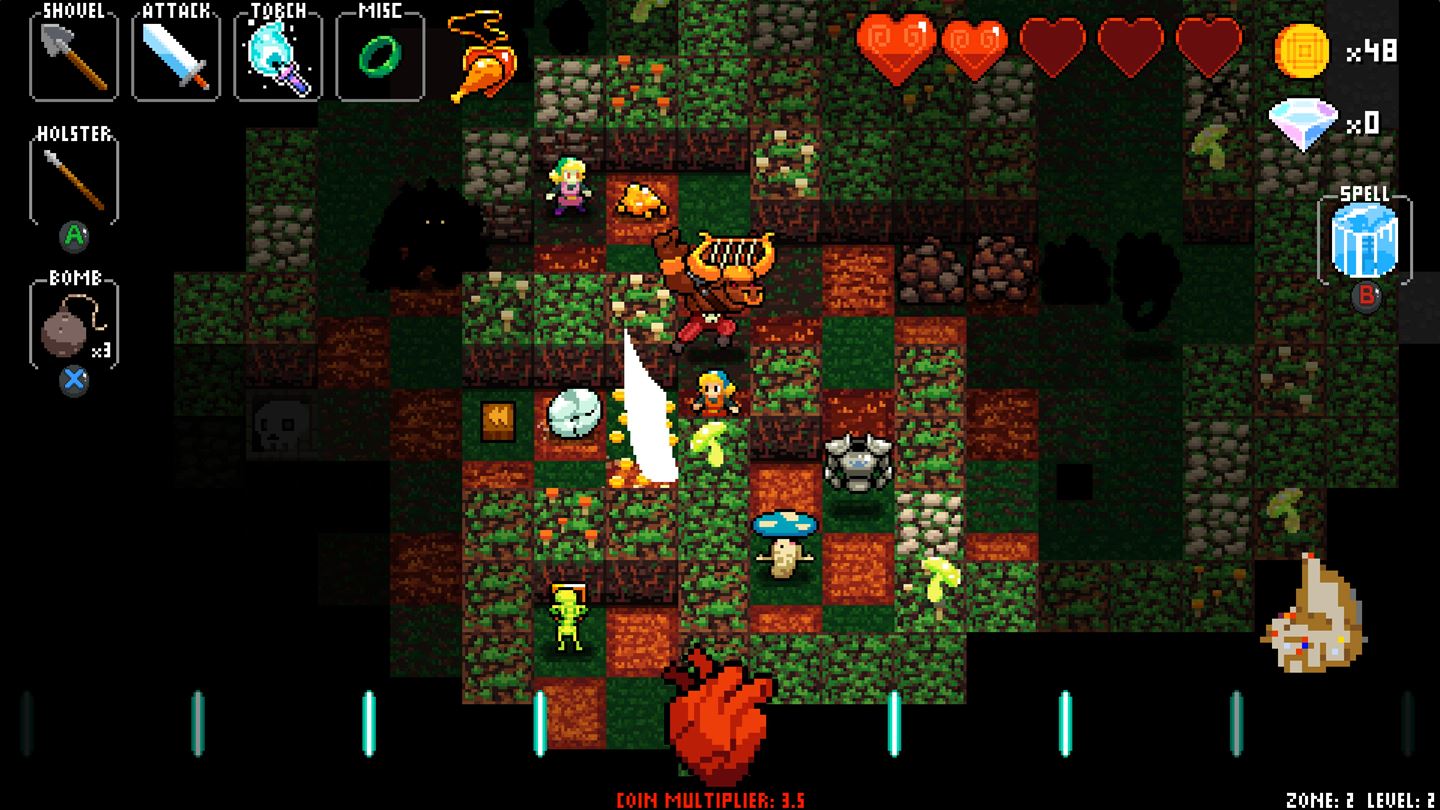 After an extremely brief introduction to the world and its systems, you are left as the heroic Cadence as you look to locate your father and your (very literally) stolen heart. For some reason or another, the NecroDancer has seen fit to steal away your heart and generally make life as difficult as possible for you. It’s all as ludicrous as it is inconsequential – what matters here is the challenge. Like any rouguelike, it’s about pushing that little bit further each time as you slowly build a stronger and stronger armoury of weapons and abilities. That and dying. You’ll be doing loads of that too.

Death comes quickly and often in the world of NecroDancer, but stick with it, and you’ll soon find, well…..the rhythm for lack of a better term. You see, rather than traversing in the traditional sense, basic movements and attacks are achieved by moving along the grid-like levels in time with the beat. The difficulty in doing so depends largely upon the type of song being played, but believe me, it’s a unique mechanic, one that makes for an incredibly high-speed and consistently compelling take on what is becoming an increasingly well-worn genre.

Yes, there are items to pick up as you progress which can be used via the face and shoulder buttons, but the core experience is all about moving in time with the beat, something that can prove infuriatingly difficult to maintain. At times, the game can feel surprisingly easy; you’ll get into a rhythm and start smashing through enemies at a blistering pace. Lose the beat though, and like any rhythm game, it can be difficult to pick it back up. Of course, in other rhythm games, losing the beat can mean a handful of boos from an uruly crowd, here though, it nearly always means death and a return back to the start. 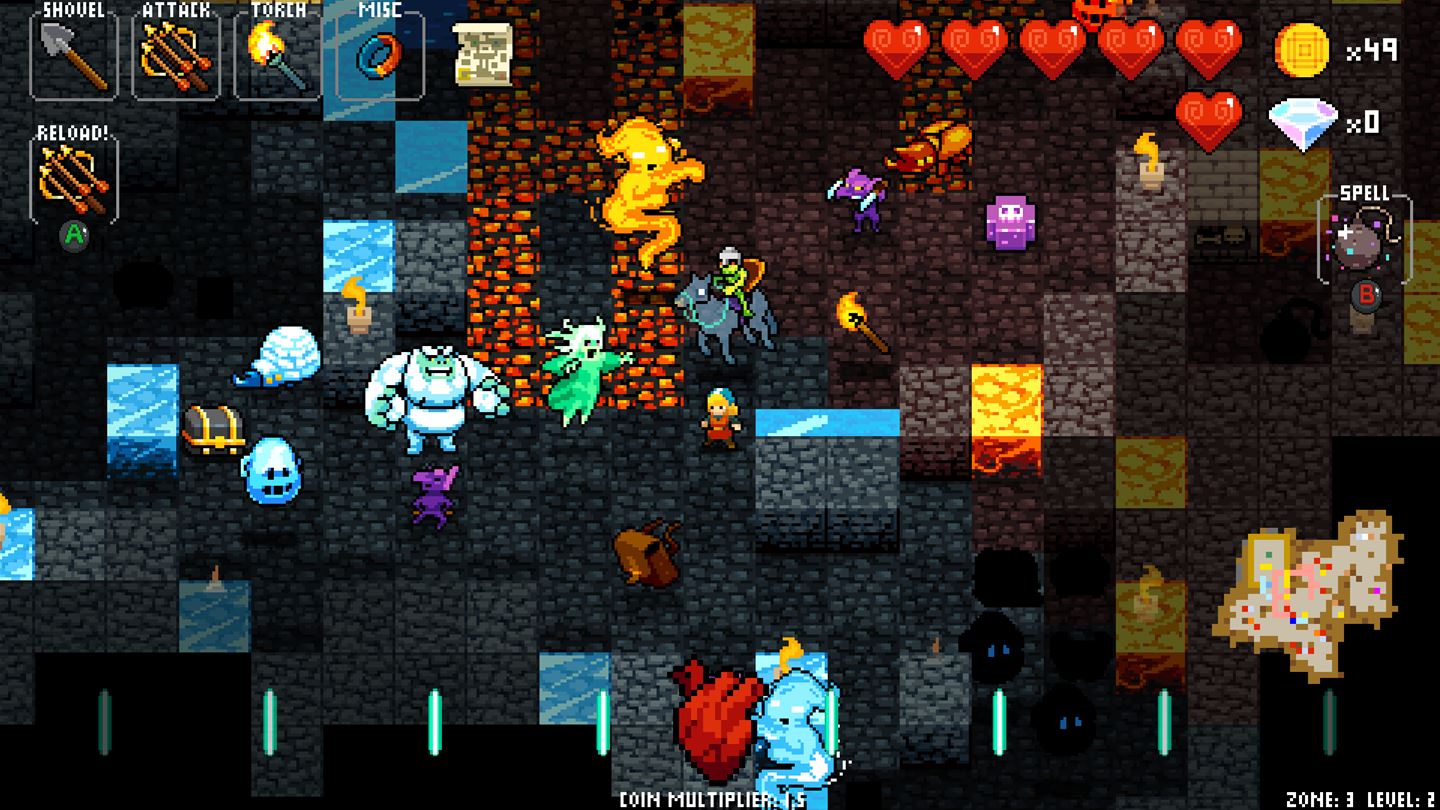 A trip back to the start can be hugely infuriating, and like any roguelike, you’ll need a certain mentality to look beyond the immediate frustration of a failed run, but with the constant draw of collectible diamonds and the outrageously fantastic soundtrack to push you on, the pain of death is often easier to bear than it might have otherwise been. On a purely mechanical level, the collectible diamonds allow you to kit out your hero in increasingly impressive gear, but in the moment, yeah, it’s all about the music.

With the original soundtrack delivered by Danny Baranowsky (of Super meat Boy fame) and additional tracks added by the likes of Jake Kaufman (Shovel Knight) and Chipzel (Super Hexagon), it’s hard to be annoyed returning back to the start when it ultimately means returning to one of the many fantastic tracks that will be buried into your subconscious by the time you decide to put this dangerously addictive adventure down. Not all songs are created equally of course, but for the most part, Crypt of the NecroDancer’s soundtrack has to be amongst the finest of the generation…..it really is that good (unless you happen to be my wife…..she isn’t so keen at this point).

With an array of game modes, tons of unlockable characters and a seemingly never-ending selection of challenges, Crypt of the NecroDancer provides plenty of content for those eager to take on its admittedly unforgiving dungeons. Some will invariably be put off by that initially steep learning curve, but stick with it and you’ll be treated to one of the most innovative and downright addictive roguelikes released for quite some time. With simple but incredibly effective gameplay and one of the best soundtracks around, Crypt of the NecroDancer proves a hugely successful genre mash-up and a fine indie alternative to all of those triple-A experiences flooding the market right now.