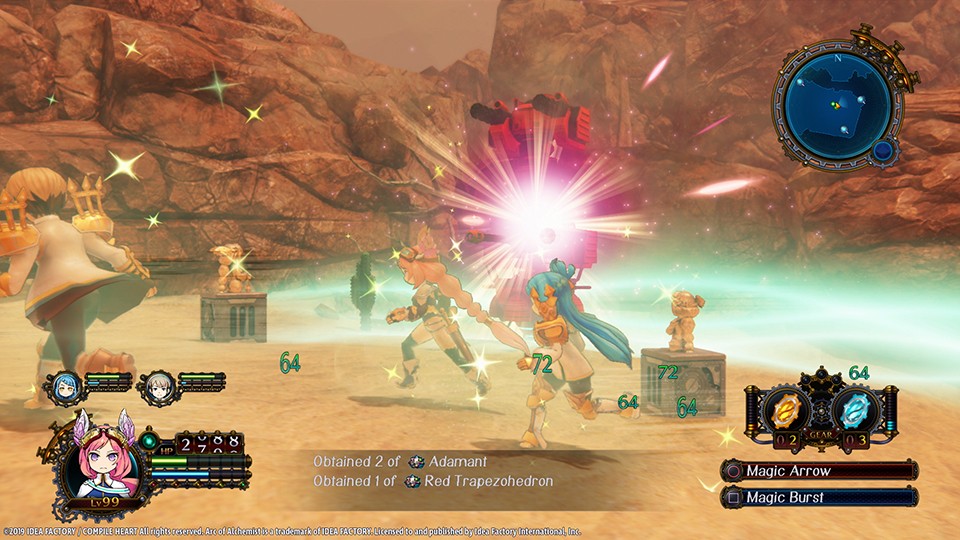 It’s a simple formula: I see Idea Factory attached to something, I wanna give it a try. When I know IF is distributing and usually working on a game, that means three things. One, the voice work is going to be top notch in Japanese, and the English voices tend to be quite good as well. Two, there’s going to be a ton of gameplay available, probably more complex and convoluted than I’ll be able to explore on my own. And three, there’s usually plenty of great jokes peppered in, as the writing is often clever, punny and breaking the 4th wall constantly. Compile Hearts is their frequent (but not constant) companion in this endeavour, and, thanks to my joy with the Neptunia series and such, I tend to be more forgiving and excited for new IPs launched here, even if they are, well, a bit off from what I imagined.

With Arc of Alchemists (which has nothing to do with all the other Alchemy on the Switch), you get to play the role of Quinn Bravesford, a woman who grew up in a post apocalyptic world, one where the wars and the greed of man has finally ended all the prosperity we created. Now, the desert is constantly encroaching and resources become more and more scarce as time goes on. The surviving humanity is also beset by some sort of mechanical beings, malevolent remnants of days gone by, which seem to have no problem existing in the wasteland and attacking any who explore. Quinn is embittered by the reality of where she lives, but she isn’t without hope. Creating a band of dreamers and survivors, such as herself, she explores the wasteland every day, casting wider and further in an attempt to find some sort of relic, some left behind magic, that might allow her and her people to thrive and prosper once more. The artefacts and clues are out there, but Quinn’s tribe isn’t the one who craves balance, and, if she isn’t careful, she may cross swords with someone who has some truly nefarious plans for the future. 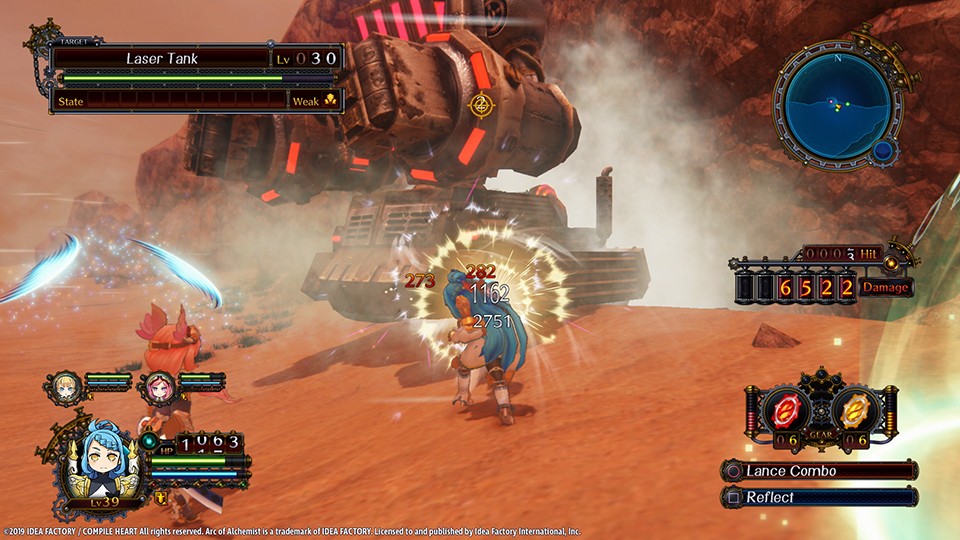 Arc of Alchemist is an action RPG that, like so many Compile Hearts games, has a lot of different hats to wear in order to fully experience the game. Naturally, you have a tribe of people you lead, but you only take a handful out at a time into the wasteland to explore and seek items, clues and information. You can swap out members by returning to your primary base, which is also where you can heal, change equipment, buy new stuff and upgrade your skills and your stats. You use cash for all of this, and, once again, I’m left wondering if the classic video game tropes should still hold up here. I know Quinn isn’t the only one exploring and trying to find the means to survive, but she’s certainly the most prolific (she’s regarded as a princess and a general), so why not give her all the supplies she could desire without charging her a cent? But I guess that gold is needed to…buy stuff from other tribes to keep this one going. I dunno, whatever, moving on. Cash is important not only at the base, but also to open up additional campsites out in the wasteland that act as satellite bases, and need to be maintained, so you can’t just go opening up a huge number everywhere and expect them to stand on their own. This isn’t Forever 21, you need to think ahead with your money spending.

Outside of the base work, a good majority of the gameplay is focused on the hack-and-slash aspect of combat, and Arc of Alchemist is sort of middling in the delivery of these ideas. Don’t get me wrong, there’s some good stuff happening here. You have two primary attacks (a melee and a ranged), you can set your AI companions to act and treat combat in different styles (free for all, group target, hang back to heal, etc.), and you have 360 control of the camera to decide where and when to go with the enemy hordes that crop up. You also have these items called Lunagears, which are these elemental additions that allow you to add a flair for your combat and also your exploration. Since this wasteland is completely insane, you might need to have the Lunagears summon fire to burn down bushes, or lightning to revitalize a dead machine blocking your path, or even combine the four key elements to make new ones, like summoning a windstorm to hurl you up to hard-to-reach places. There are skills that build up as well (sort of a limit break bar based attack), and you’ll mostly use these for boss fights and when you’re just sick of dealing with wave after wave of scorpions and mashing A gets boring.

What’s really interesting to me is that Arc of Alchemist has some of the best voice and music that I’ve heard in a Compile Heart’s game in some time. The music has a distinctly tribal, desert feel, using a lot of flute and drum music (several elements bringing me back to my days as an Atelier of Dusk), and it moves well between the over-world walking music and the more upbeat, drama-inducing tunes that occur when combat begins. It’s a delight to hear, even when the tone changes up significantly upon returning to the base and getting some more cliche prompts, like finding out you’ll be doing a magic show for the people because why the hell not? All of this is delivered with some solid voice actors and actresses injecting a lot of emotion and thought into a plot that could be incredibly cookie cutter. World is over, we need to survive, the answer is out there somewhere, oh look I found it, I’ve saved humanity. We’ve been down this path, but there’s some impassioned writing and good snapshots of the humanity that survived the apocalypse in spite of everything. I didn’t want to hurry through the cutscenes or the breaks in combat for Quinn’s monologues or the exchanges between delightful characters like Sharon, Sandra, Micah and many more. It’s easy to be invested in the story of Neptunia because I’ve played so many games and they’ve had such a long run and a ridiculous premise, but it says a lot that I care about Quinn’s future despite being dropped into her story rather suddenly. 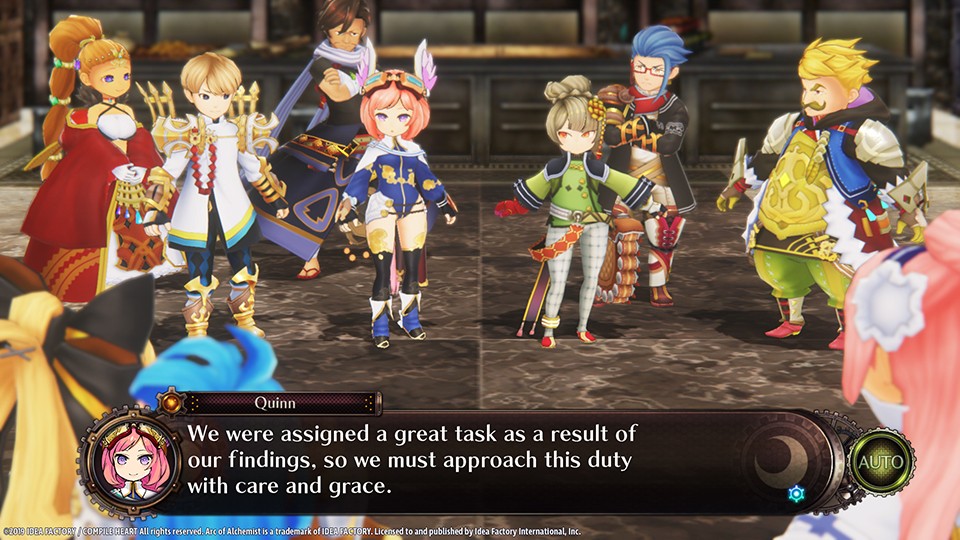 Unfortunately, I think Idea Factory is suffering a bit from the whole Nintendo Switch porting issue, and it only appears to be getting worse. My review of Fairy Fencer F pointed out that there was significant stuttering and drops in frames during more intense portions of the game, and I sort of hoped that it would get patched out in future versions. Arc of Alchemist almost feels like the company is doubling down on the idea of “we don’t need to make it look good, the players will buy it anyway,” and it strikes a nerve. The character models are cute and effective, but they’re chibi and clearly don’t require as many resources as other games. The landscape is vast, but it’s also repetitious and doesn’t exactly use a ton of bold new designs. Once you find the first scorpion or monkey-like beast, or the first Mecha trap hanging out in the sand, then you’ll see it another hundred times before something new comes along, and you’ll be shocked at how choppy the whole experience is. I mean, when I suffered from bad frame rates on the PC, that’s understandable: my video card is the same age as my oldest child and I got it cheap even then. My Switch is weeks old at this point, and we give certain allocations for handheld mode, but not to the point of insanity. This isn’t some massive project, it’s an action RPG with simplified characters.

Still, Arc of Alchemist does have those great sound aesthetics I mentioned before, and it’s super easy to get dragged into this world without realizing how much you’re putting in. I’d rather it ran better, because that does keep me from diving back in after I break the surface and come up for air. If you’re a sucker for a good soundtrack and some decent hack and slash with plenty of building and upgrade options, it’s a fun jaunt, no bones about it. However, if you’re used to a premium ride and don’t care to downgrade to coach, you’ll just need to grab a different alchemist title to make your Switch transmute free time into gaming.

Love everything about the game except playing the game itself. Rough.