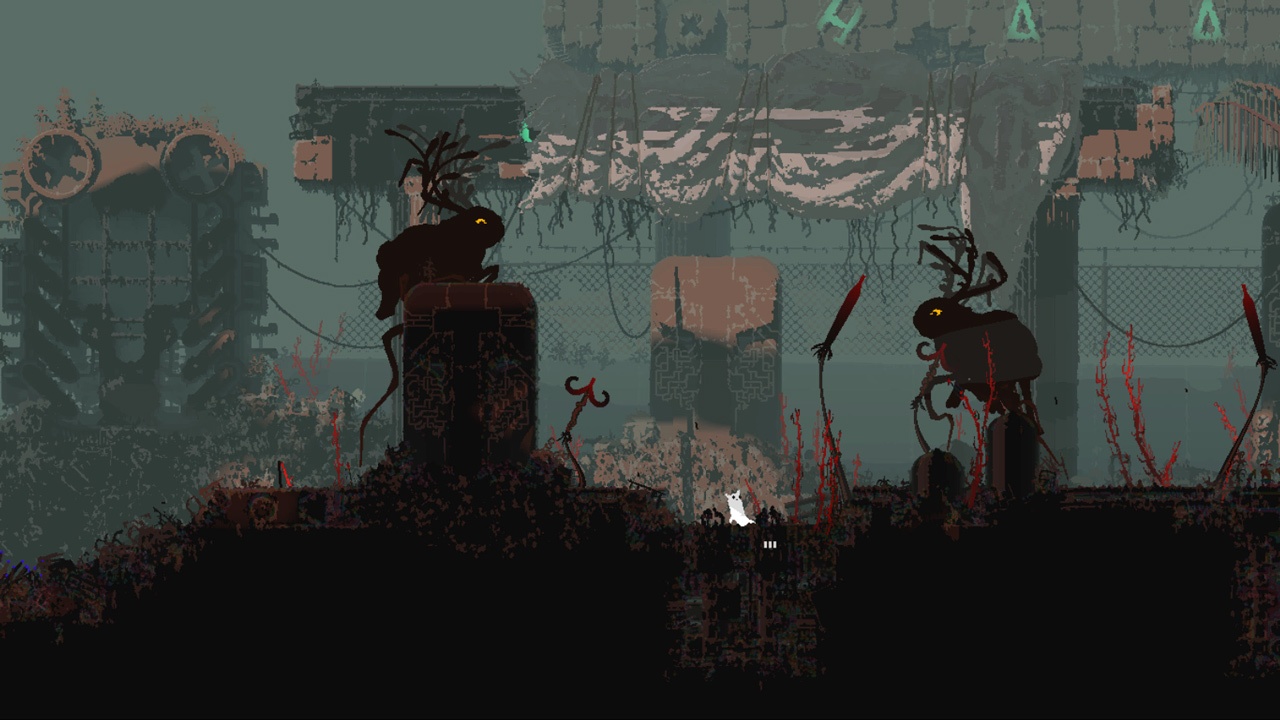 Rain World is a beautiful, haunting world inspired by 16-bit adventures of yesteryear, where the player becomes an adorable, amorphous creature known as a “Slugcat.” The premise is simple: Survival of the fittest, and after being separated from its family, our adorable little albino protagonist must escape horrific rainstorms, dodge scary creatures, and regularly seek out nourishment while trying to find its family. This Platformer-Action hybrid has elements of suspense, with stunning visuals that recapture a bygone era of gaming while staying centered in current dynamics. Released on March 28th, 2017, by Adult Swim Games, Rain World requires players to be patient and cunning, but is the grueling journey asking too much of its audience?

Rain World’s strength lies in its captivating look – it is a stunning, post-apocalyptic world that drives home a sense of desperation and suspense, especially as you venture out further into the locations. Navigation comes by way of tunnels and tight ropes, jumping from platform to landing in an attempt to bypass hazards like giant crocodile-looking monsters or even vines that come to life and consume you. There are spears and rocks to chuck at enemies, distracting them and testing their degree of aggression; still, often the best tactic for survival is evasion, and our Slugcat is a relatively squishy critter.

When stealth fails, players must use the Slugcat’s natural agility and flexibility to out-maneuver opponents. Considering that the bulk of Rain World’s gameplay comes down to exploration and questing for food, the days feel chaotic and action-driven. When the rains come, a rumbling alerts players to head for shelter — one of the few locations where the Slugcat can hibernate and “save” the game. However, it’s very easy to get caught out after a long day of travels, and dying — whether by drowning, or being eaten by another denizen of this desolate land — resets all of your progress back to your last hibernation. 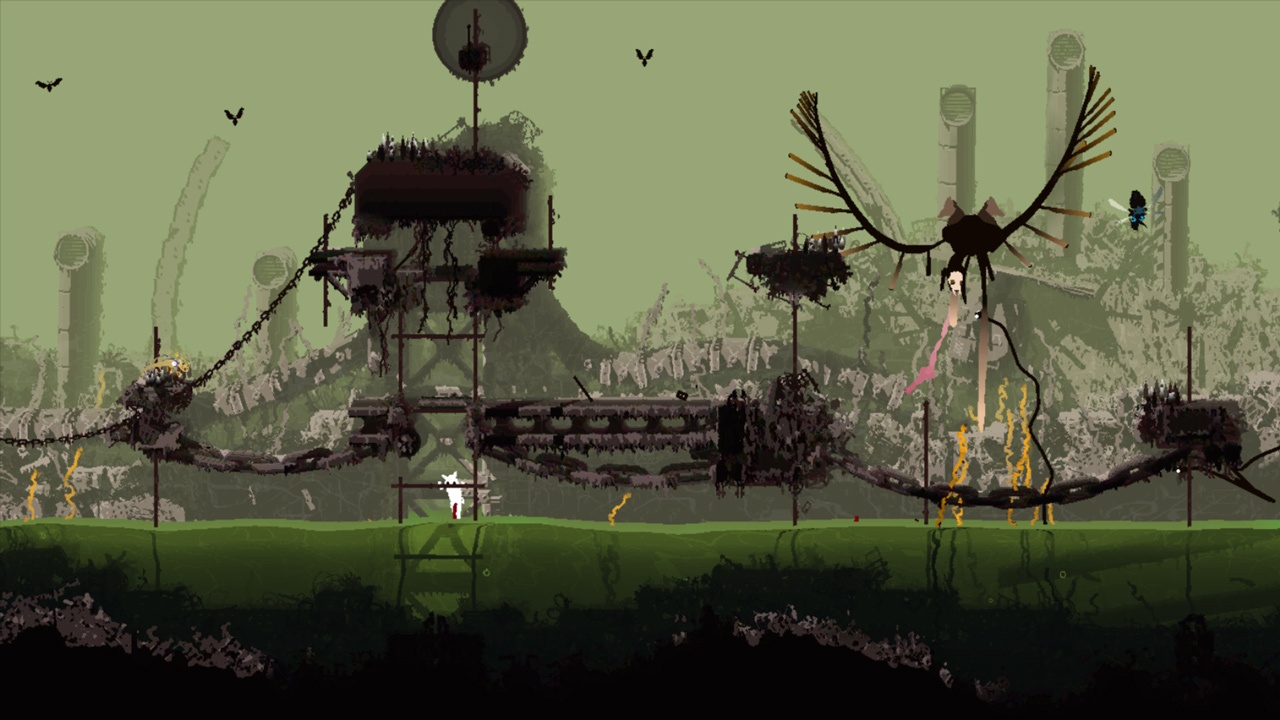 Something is charming about the Slugcat’s appetite, and I found myself targeting the bat-like creatures more than stagnant, indigo berries, just for the sheer pleasure of plucking off their wings and devouring them in several bites. Still, the ecosystem tends to feel increasingly bare-bones and void of food as you venture out, and those limited resources certainly enhance the Time Management aspects of Rain World’s survival themes. The game boasts more than 1600 rooms in 12 different regions, and the ruined wasteland of some ancient civilization makes for the perfect setting to find the platforms and pitfalls that plague our Slugcat’s journey.

The trouble lies in some questionable precision to the controls, and even on the Playstation 4, I found that my Slugcat’s movements were sometimes too imprecise for me to navigate a set of platforms successfully. I would randomly fall through vines and tightropes instead of clinging to them, which meant that I had to repeat a circuit of travel all over again after falling into the screen below. On top of that, Rain World manages to motivate players with exploration and discoveries only to punish them for venturing out too far, or for not managing their time better. I often lost track of the most direct route back to the nearest hibernation area, and more “Save” spots would have helped to eliminate some of the mandatory backtrackings in this title. On top of those complications, Rain World uses a “leveling up” system that slowly unlocks as the player successfully hibernates for consecutive nights, but death resets all of that progress. This cycle of life and death makes progression tedious instead of the thrilling, quest-like experience that it could have been. 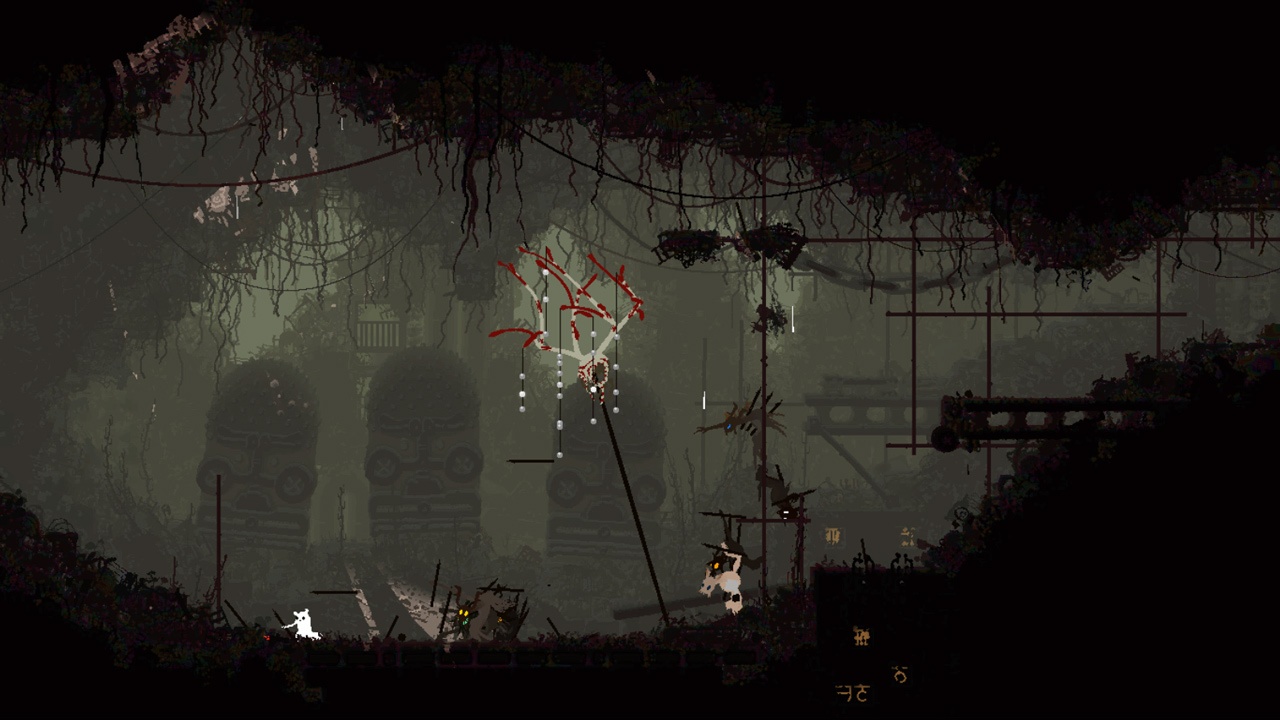 Rain World is undoubtedly one of the most beautiful pixel video games I have ever encountered, and the complexity of the graphics ushers it out of Retro arenas and into a polished, modern charm. The sounds are minimal, as is the soundtrack, but what is present manages to blend well with the overall ambiance of the world. It’s a dark, treacherous place to exist, especially for a lone Slugcat that was separated from its family, and I desperately wanted to root for the cute little guy as I searched for the missing cornucopia of slug-like creatures. But the atmosphere that was splendidly created is diminished by the frustrating lack of finesse in the controls, a lukewarm tutorial that left me wondering what to do other than find food and hibernate (though, arguably, that’s precisely the goal in Rain World anyway). Plus, there is a system of progression that seemed determined to punish my mistakes threefold rather than motivate me to improve.

Still, if the Platformer genre is your forte, and you’re looking for a lovely, dangerous world full of exotic creatures, Rain World isn’t a bad choice. The Slugcat is an adorable little hero, and the experience can be immensely rewarding when you thwart your foes and progress to the next region. It’s an incredibly unforgiving experience, but it’s also keenly immersive, and you can pit enemies against each other at times to defeat them both without throwing the first rock. Procedurally generated rooms and seemingly random creature encounters work together to create a unique experience, but that comes with steep penalties for failure – and, unfortunately, too many instances where the deck is stacked against the player and progression is unlikely at best. I enjoy a highly challenging experience as much as the next person, but when the payoff can’t overcome the huge disadvantage of dying I quickly lose interest, even in a game as versatile and varied as Rain World.