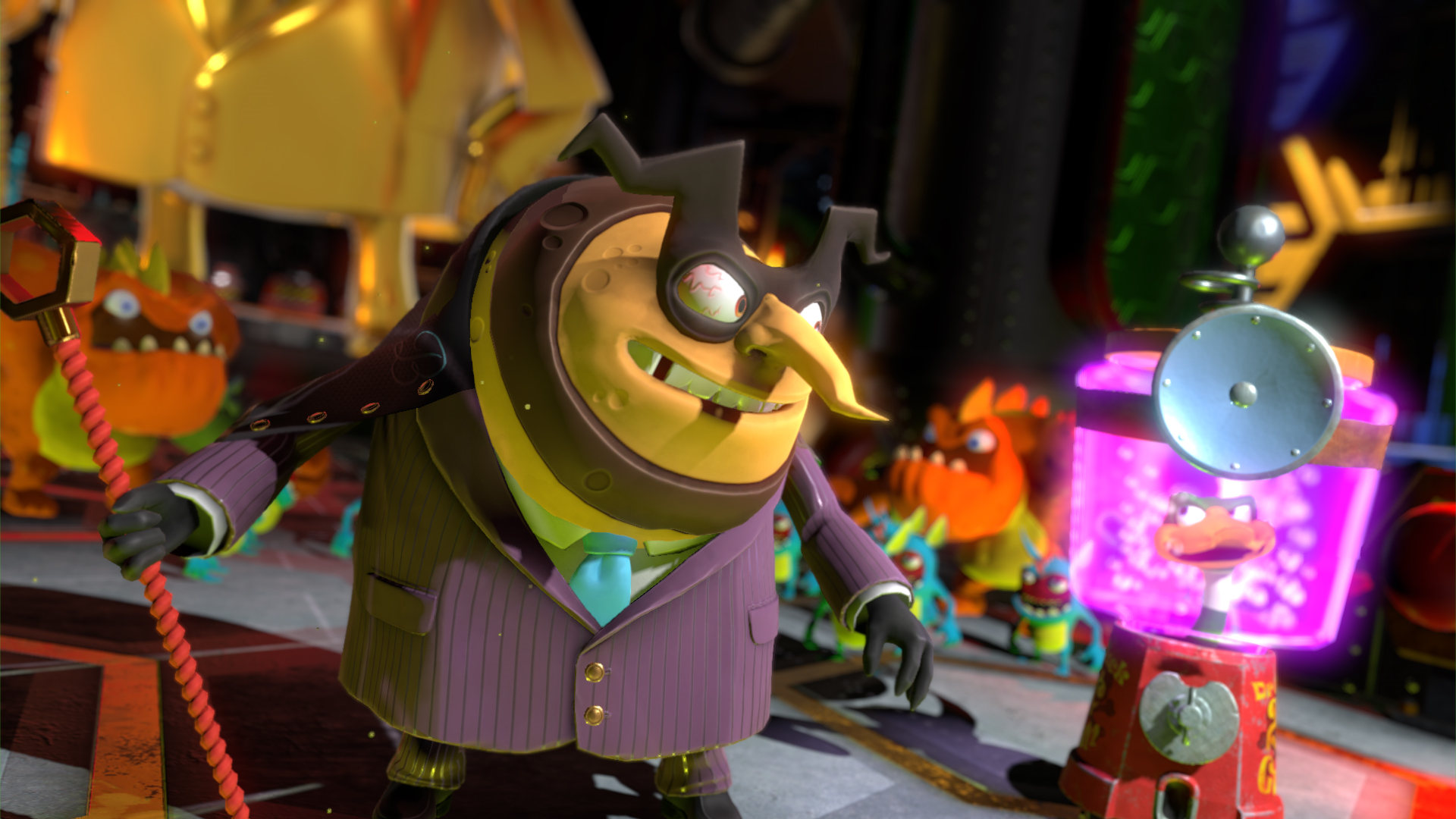 Remember Banjo-Kazooie on N64, Rare’s exemplary 3D platformer? It was the series that came closest to recreating the consistent brilliance of the 3D Super Mario series, and while the bird and bear never quite matched the polished perfection achieved by Nintendo’s ever popular mascot, it came closer than most, and to this day, remains a firm favourite amongst 90s gamers.

Since then, there have been a few decent platformers with the likes of Ratchet & Clank making an especially decent stab of it, but for the most part, the genre has died something of a death, and those that have appeared in the last decade and a half or so, have rarely come close to the high bar set by Rare at its peak.

Well, that’s all about to change with, what is for all intents and purposes, a new Banjo-Kazooie game. Sure, Banjo and Kazooie are nowhere to be seen, and yes, there are no actual Jiggy’s to be found anywhere, but man, talk about wearing your inspiration on your sleeve. Under normal circumstances, Yooka-Laylee might well be described as a rip-off, but considering that developer, Playtonic is made up of a huge number of ex-Rare staff, the similarities seem a little more reasonable.

They do to me at least. Not sure what the legal ramifications of such a game are, but this really is Banjo-Kazooie 4 in everything but name. The design, the art style, heck, even the font will be immediately familiar to anyone who has played a Banjo-Kazooie game before. Most importantly though is that structure – there are no vehicles to create here, no twist on the established formula – this is a pure 90s platformer with the only thing to really differentiate it from what came before being the new coat of HD paint. 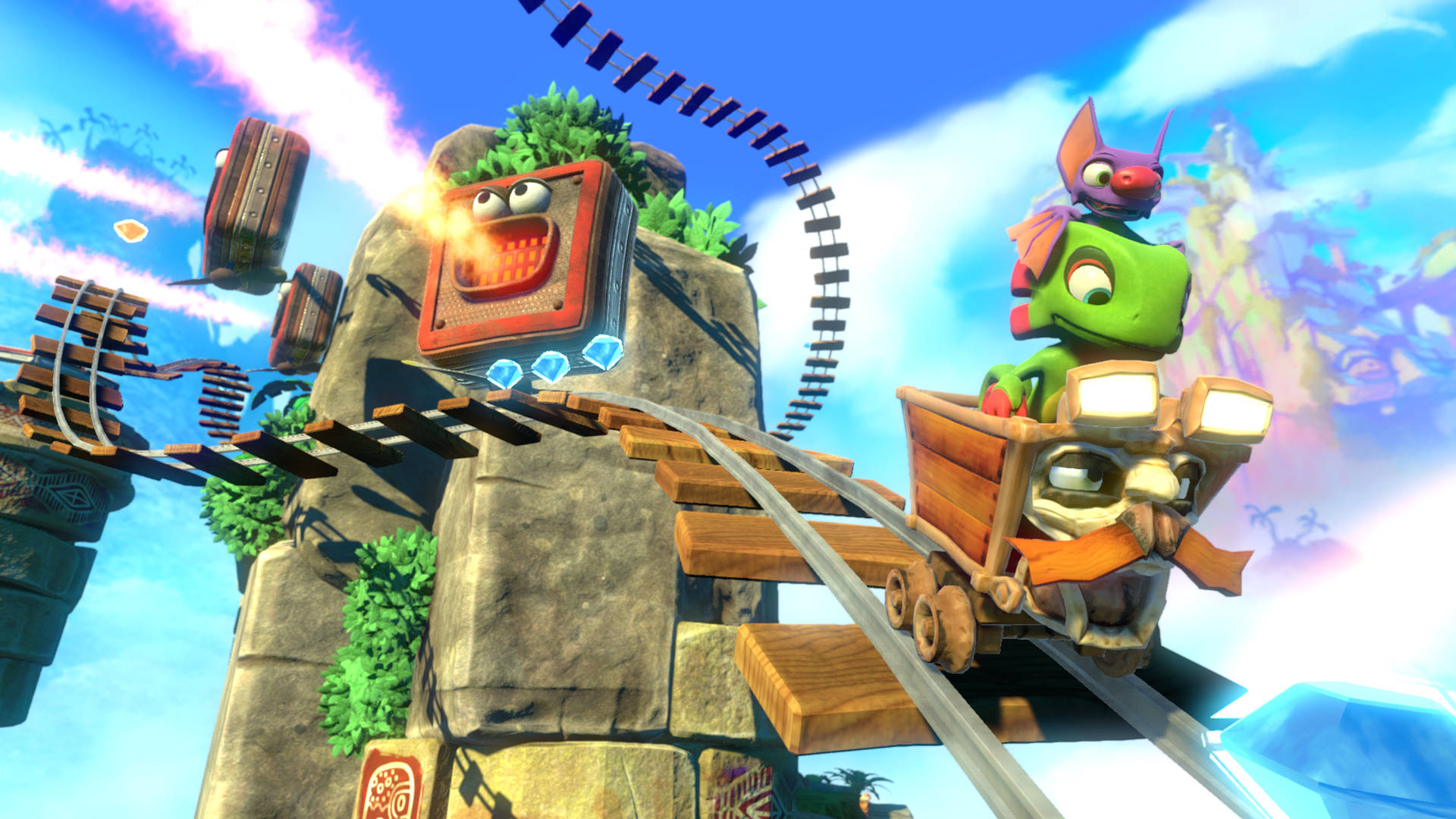 Of course, this slavish approach to its design ethos is what made it such an exciting proposition in the first place, but while there are certainly many positives to such a defiantly committed return to a much-loved (and much missed) genre, with such a return comes a host of issues that have been ironed out of many other genres in the accompanying years.

Don’t get me wrong, Yooka-Laylee is a joy to play, and there is fun to be had with its strong sense of nostalgia, but man, some of it, just some if it would have benefitted from a more contemporary approach. Take the cast for instance; yes, Yooka and Laylee are charming creations from a visual perspective, but the writing is…..it’s pretty bad. Tonally, it’s all Banjo-Kazooie, but with those old rose-tinted glasses on, it appears that everyone has forgotten just how bad it was (even back in the 90s). The delivery is even worse. Again, I get why they did it (all aboard the nostalgia train and all that), but hearing those squeeks, beeps, barks, and God forbid, belches, quickly begins to grate.

Some people will love all that of course, but everyone else, be warned, the story and delivery will likely prove something to get through rather than genuinely enjoy.

That all sounds pretty negative, but that’s only a small percentage of what makes up this otherwise brilliant adventure – Yooka-Laylee is all about exploration, slick platforming, and yes, collecting. Those who long for the old days of 3D platformer collect-a-thons rejoice, because Yooka-Laylee nails it in a way not achieved since, well, the last traditional Banjo-Kazooie release.

Pagies, Quills, atom things – there is absolutely tons to collect here and an absolutely huge world to explore. The worlds themselves could be better sign posted (it certainly lacks that level of creative polish that is easy to take for granted in Nintendo’s finest efforts), but the worlds are large, varied and home to a huge amount of content. The challenges are enjoyable and the quality, despite the occasional dip, is pretty consistent throughout.

What makes it great though is the control scheme. Controlling Yooka and Laylee together is an absolute joy with the two effortlessly moving between combat and platforming with ease. Projectiles are a bit awkward and the occasionally stuttering frame rate can annoy from time to time, but those really are the only blots on an otherwise stellar report card. 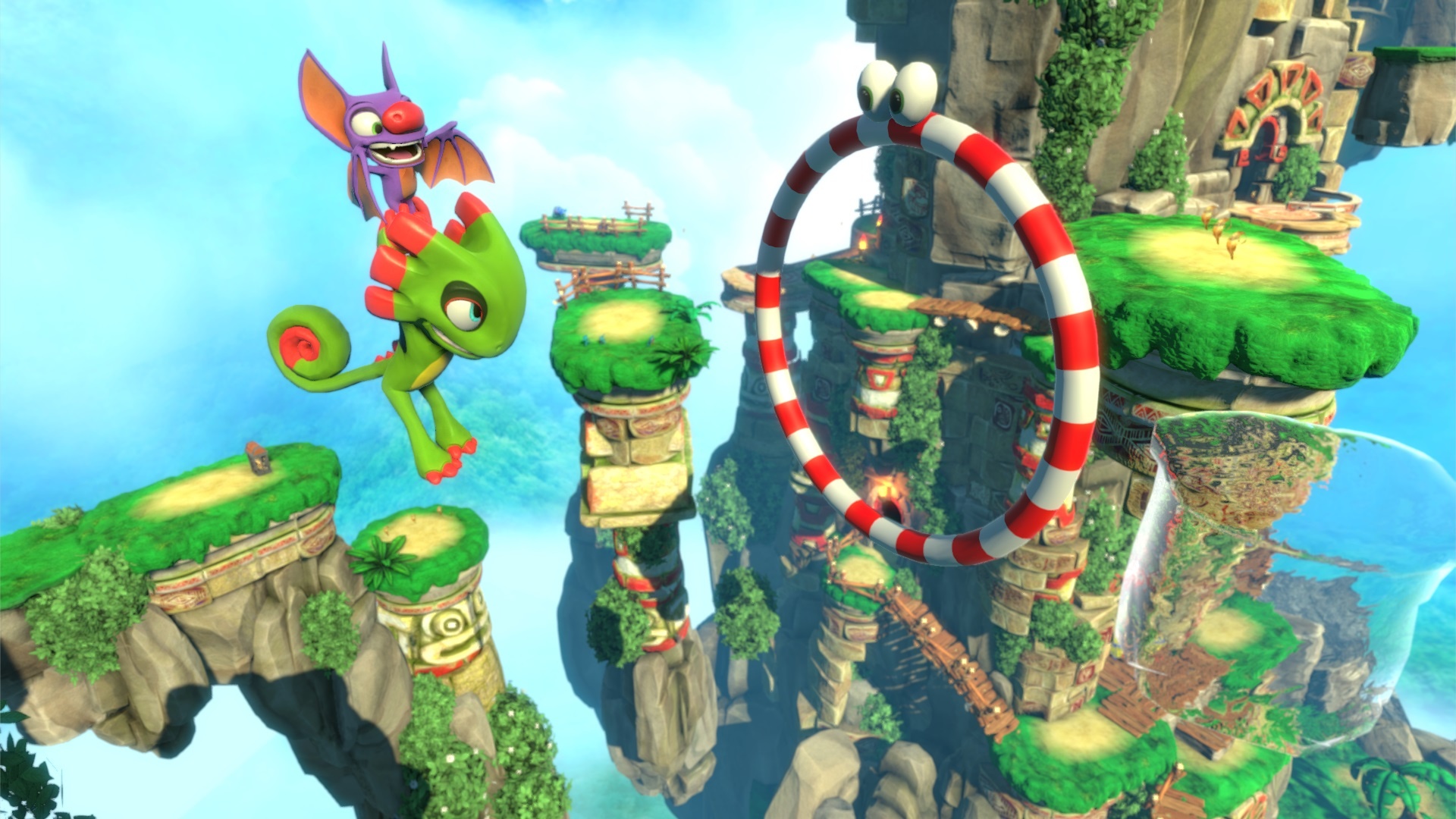 The real brilliance of it is how the drip-feeding of abilities is directly linked to the collecting of items in-game. Beyond the ability to unlock new worlds or even enhance existing worlds to unlock further challenges, your collectible quills grant new abilities that open up the game even further. You have to chat to some horribly designed and incredibly annoying snake to unlock said abilities (which is a bit of a bummer), but it’s worth it given the brilliant way that each world opens up as you continue to enhance your abilities.

Luckily, not all of the supporting cast are a complete bust – the recurring Rextro is a charming polygonal 90s obsessed dinosaur who provides you with a host of old school arcade challenges that do a great job of breaking up the more traditional 3D platforming gameplay. Not all of the arcade games are classics, but they’re all fun diversions and combine to create a decent collection of mini-games that can be played within the adventure or directly from the main menu.

Its commitment to nostalgia is both Yooka-Laylee’s greatest strength and its greatest weakness. The characters are largely annoying and the writing and delivery is almost universally bad, but man, that gameplay is still very special indeed. Having been largely starved of traditional 3D platformers for the past 15 years, this serves as a perfectly timed reminder of why the genre was so popular in the first place. With its fantastic mechanics married to a selection of sprawling words chock full of challenges and a fantastically addictive sense of progression, Yooka-Laylee overcomes its occasional rough edges and lack of polish to deliver the finest 3D platformer this side of Super Mario Galaxy.