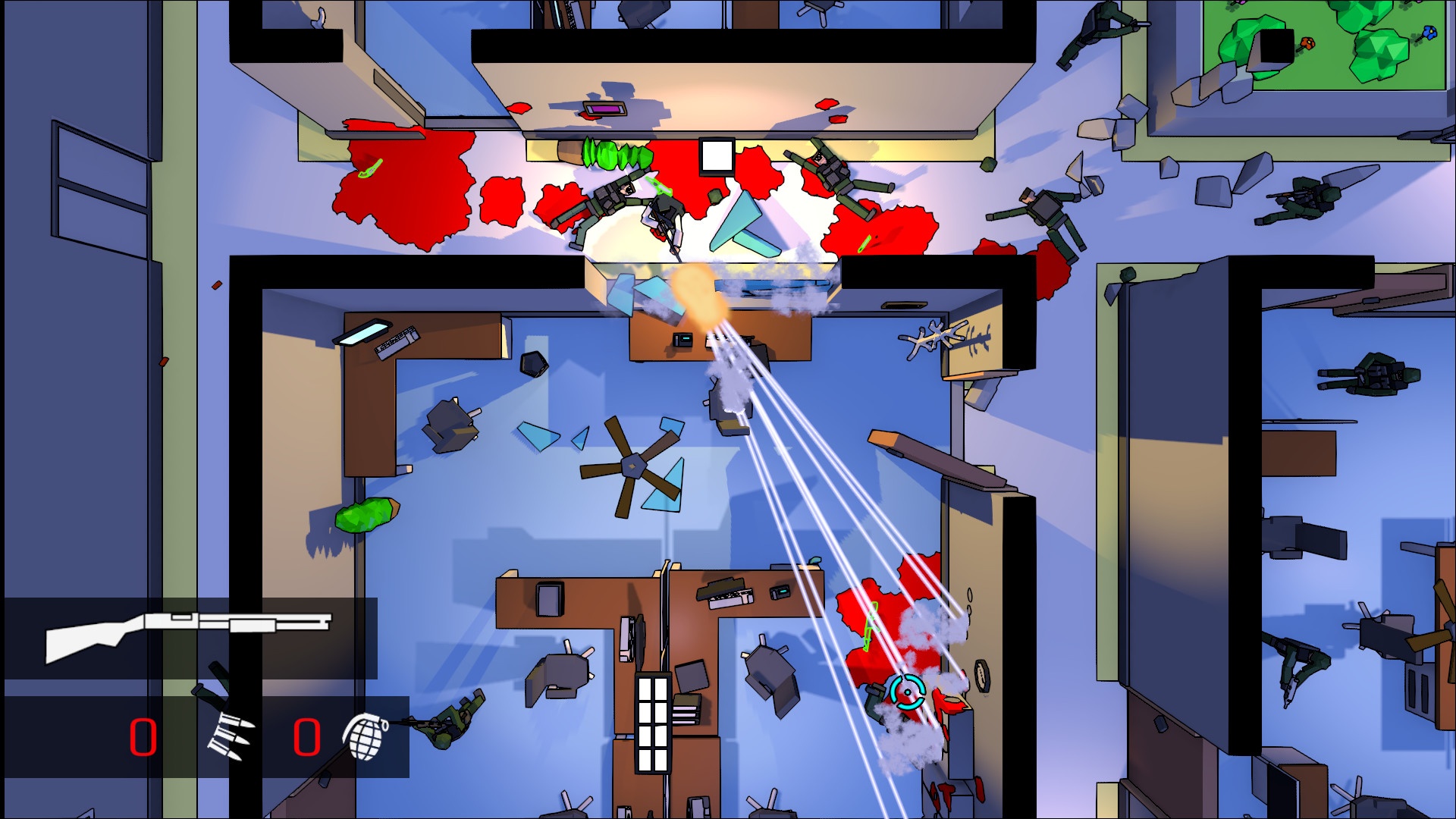 Sometimes you don’t want to have a game with a complex story or atmosphere. Sometimes you just want to go out and shoot things for fun which is something Redie manages to accomplish. Developed by Rückert Broductions, Redie is a game that’s all about being fast and accurate in a series of gunfights straight out of Diehard. A fast-paced top-down shooter, Redie focuses entirely on a great gameplay experience with little to no story. All you know is that you are the good guy, there are terrorists, and there are guns that you can use to cause end their evil; simple and effective

The game’s main strength is in its gameplay. From a bird’s eye view, you control your character through a series of levels designed with different objects, enemies, guns, and more. You move your character to any direction you want while using the mouse to aim and fire your gun at the enemies. Aiming is a critical gameplay feature you must master as the gun fires in the direction your character is looking towards due to your mouse. Advancing through each level will give you harder enemies and more guns you’ll have to master to beat them. Each gun fires in different ways such as the pistol firing a straight shot, the shotgun using a spread shot to take down multiple enemies, machineguns that fire rapidly, and so forth. Knowing what direction and abilities your guns can do will be helpful in the gunfights because all it takes to kill you, and your enemies, is one shot. 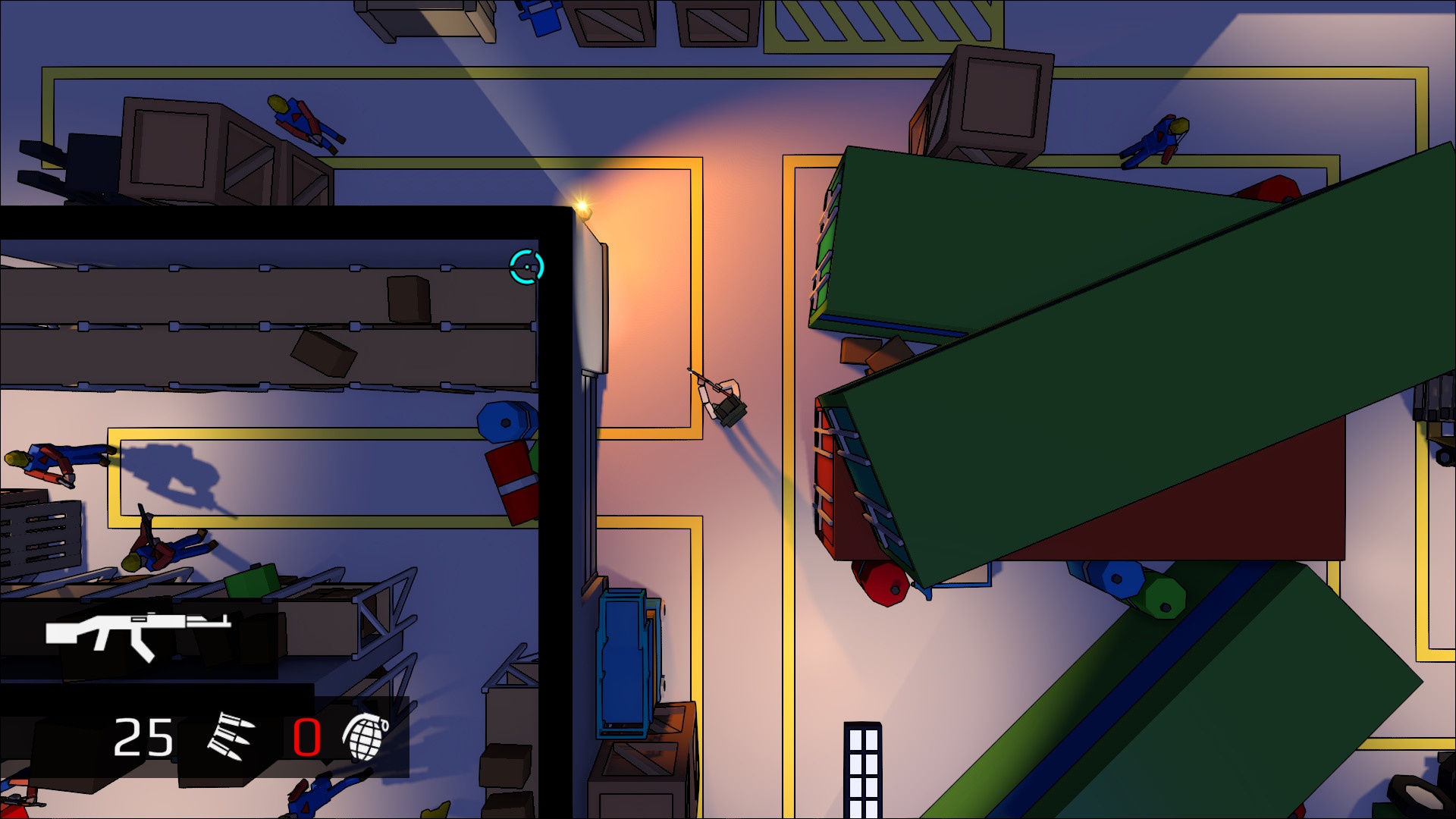 Without a heath bar, you are forced to strategize so that you can take out each enemy while avoiding to redo it all over again by a single stray bullet. This involves looking ahead, seeing the movement pattern of your enemies, and what protects you from gunshots.  Its ill-advised to just charge ahead although you may have to as some level start with you already being fired upon. The AI is very well done in this game, allowing you quite a challenge as your enemies have great aim and will investigate if they find something amiss or hear a gunshot. You don’t want to be overwhelmed by these guys so take each one down one by one by using your guns and environment to your advantage. However, there is a reason it’s called “Redie”, and you’ll die a lot trying to beat each level in this game. Thankfully, every level resets itself upon death and you can try again and again without the level changing at all. This allows you to try your current strategy again or try a new one. Sometimes you’ll want to die a few times just to get a feel of the level itself so you can complete it at a faster rate.

While the game is challenging on its own, it has a special set of objectives for each level called “Mastery Objectives”. Mastery Objectives are special tasks the game gives you for higher points and a sense of achievement. Most of these requires accomplishing tasks like completing the level in a certain amount of time, using a certain weapon to kill enemies, shooting through doors or windows, and so forth. The objectives are based on the levels you are playing and require a great deal of speed, and skill, to accomplish. Completing these Mastery Objectives isn’t necessary to win the level, and advance onward, but they are challenging to try and you’ll spend much of your time just to accomplish this. 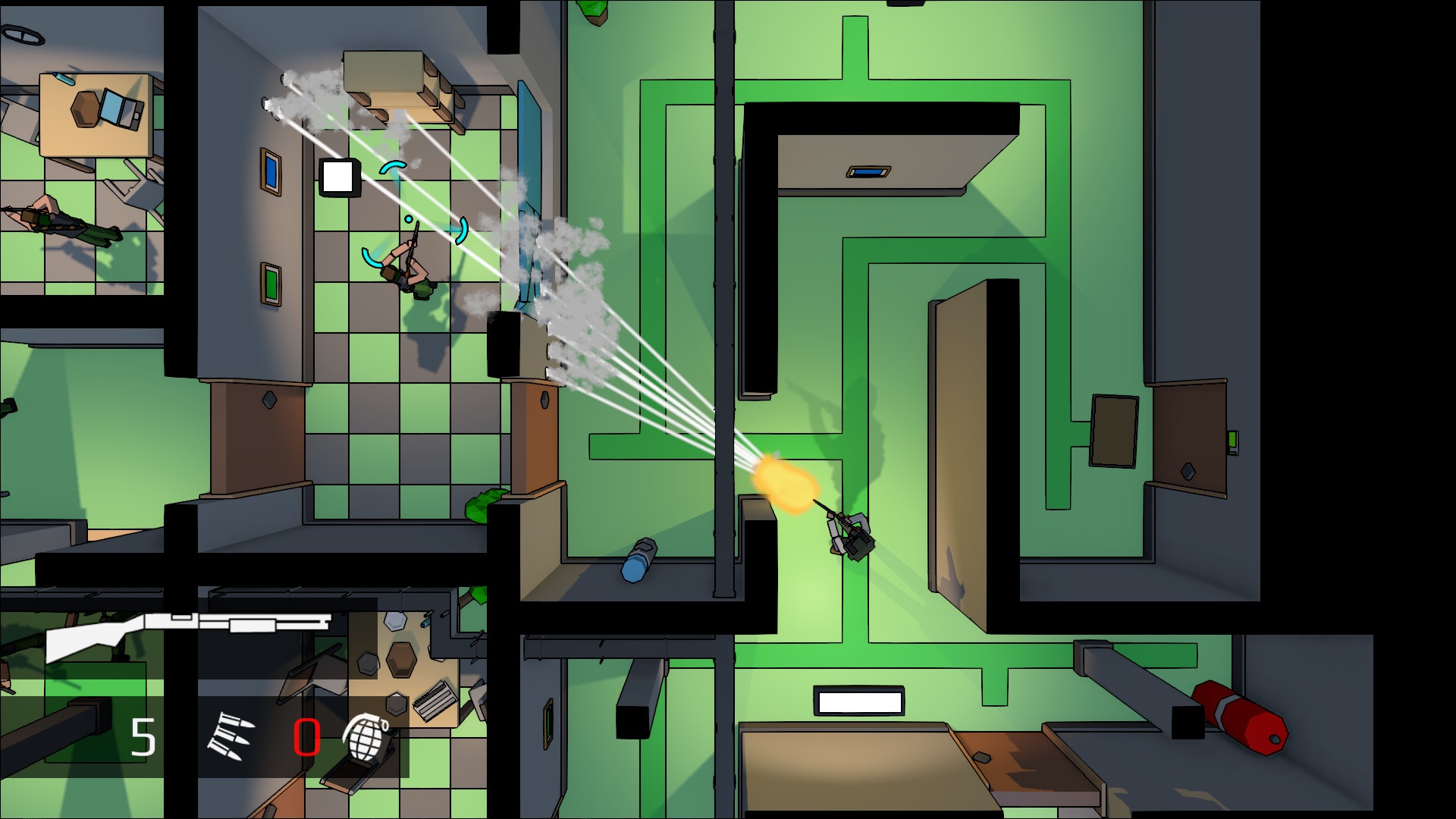 In terms of art style, the game has a very block like style that feels Minecraft like but with a smoother edge to it. Each of the levels are well designed, but they don’t stand out until you’ve destroyed half of them with your guns while painting the other half with red blood. The effects and physics in this game are quite good. With the bullets flying, and blood painting the walls, you’ll feel like you’re in a John Woo film. It’s even helped better with everything in the levels being completely destructible by your guns such as shooting glass, tearing up columns, destroing furniture, and, thanks to ragdoll physics, sending your enemies flying across the room.

Redie is a good example of how to make a game interesting and fun without resorting to complex stories and characters. It’s easy to learn, but hard to master which allows you to replay levels over and over so that you can get better scores and get higher on the ranking list for each level. If there was one problem with the game I would say it’s the music score as I didn’t find it interesting or fitting for the environment. If you wanted to play as John McCain without any dialogue this is the game for you, which I give an 8 out of 10.