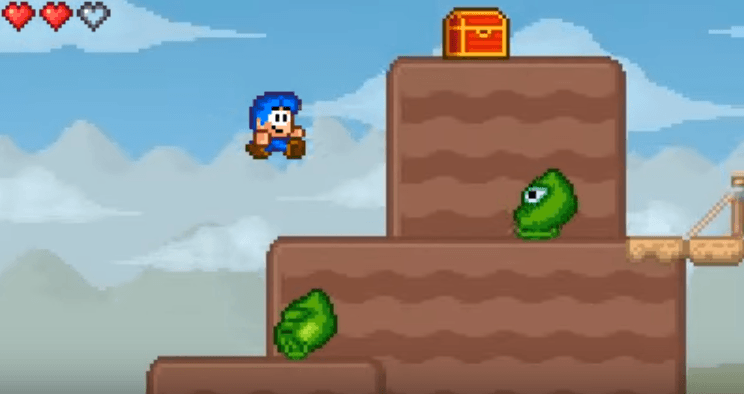 Since the rise of services such as Xbox Live, Playstation Network and Nintendo’s eShop I feel I have become something of a connoisseur when it comes to retro themed games. Many retro style games, particularly in the platform genre, commonly share references and themes with classic titles from the 8 – 16bit era, and Bloo Kid 2 is no exception.

The game begins with short a cutscene which is highly reminiscent of Ghouls and Ghosts. You (Bloo Kid) are sat in a field with your significant other and young baby, when from out of the blue a demon sweeps into view and abducts the infant. Bloo Kid immediately gets up and rushes off in pursuit of the demon. In a quest to find your captured child you have to platform your way through five themed worlds, each of which consists of nine stages including a boss stage.

Bloo Kid himself is a very generic protagonist. Aside from his blue hair there is very little about him which could be considered distinguished. He defeats enemies in the Mario style of simply jumping on their heads. He has no weapons, equipment or special abilities to speak of other than the ability to double jump. The entire game is played with the D-pad and a single face button. If you want to get a better look at your surroundings you can pan the camera up and down by holding the R trigger, but that’s about it. The game does contain a single power up in the form of a fire shield which allows Bloo Kid to blaze though enemies without taking damage for a limited time, but aside from that he is a very basic character.

For the most part Bloo Kid 2 is a standard platform game which has been very highly influenced by classic titles. It contains an opening chime which is similar to the ‘Sega’ chant at the beginning of Sonic The Hedgehog, the title screen is reminiscent of Megaman 2, there’s a mine cart stage in the style of Donkey Kong Country, and the bosses include a tree which looks like it was ripped straight out of the Kirby series, a snake named ‘Rattle and Roll’, a wolf named ‘Altered Beast’. This game is simply littered with retro references and together they form the fabric of this title as a whole.

Put simply, this game has very little to offer when it comes to originality. From a gameplay perspective it felt like something out of the Alex Kidd or maybe the Kirby series and, to its credit, despite not offering anything new it’s surprisingly pretty good.

Each level is quite short (approximately one to three minutes each in length). The goal in each stage is to reach the exit door on the far right of the course, however there are a number of optional challenges which may influence how you play. For each level you are awarded a gold star for meeting each of the following criteria.

That’s 6 gold stars available per stage. Since the time limit in each stage is so strict you’re likely going to require a minimum of two attempts at each one if you wish to collect them all. 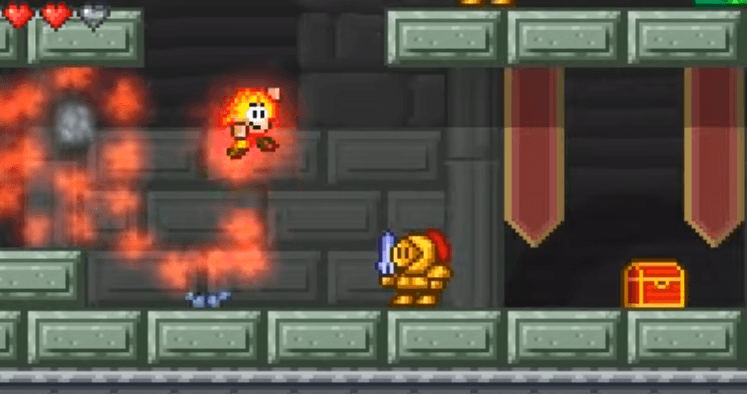 If you’re just looking for a simple platform game to kill a couple of hours then you’re welcome to ignore these additional challenges and charge through the five worlds at your leisure. However, if you really enjoy the game and wish to get the most out of it then grabbing lots of these gold stars will unlock additional special stages for you to play.

The gameplay itself is decent and the tight controls really help to boost this title’s enjoyment. The ability to double jump really helps you to land accurately, and as a bonus whenever you land on an enemy you are granted the ability to jump in mid-air again without having to touch the floor first. This helps you to continuously bounce along multiple enemies in quick succession. The enemies are varied with some that fire projectiles, some that wield shields to defend themselves, and some flying types. Although most of the levels follow the same formula there are a couple of mine cart stages and some scrolling ones to help mix things up a bit.

Bloo Kid 2 presents itself very well when it comes to the graphics and sound. The game’s graphics consist of 16bit style sprites and textures which are not overly detailed, however the choices in colour pallets for each stage are very complimentary. There were a couple of outdoor stages that had a really lovely looking sunset background, which was offset with a darker toned terrain. Nothing looked too garish or loud which was pleasing to the eye. One element that I particularly liked was the music which consists of catchy chip tunes with some very pleasant melodies. Although I have heard better in the past, I’d say that for a budget title the music here is definitely above average. 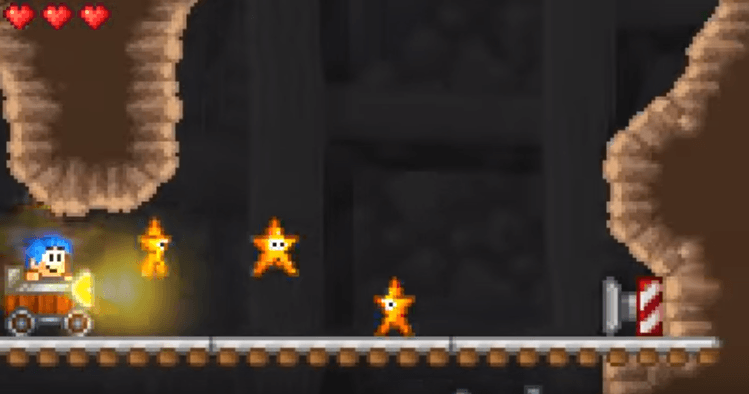 Aside from not being very original, Bloo Kid 2 is also not particularly challenging, at least not for experienced players. I lost a few lives in the later stages, however this game really isn’t difficult at all. It’s a fun, casual, walk in the park type of game which isn’t necessarily a bad thing although it may put off some players. Although easy and relatively short, there is plenty of replay value to be had in trying to unlock all of the additional stages. There are also a couple of additional game modes which can be unlocked after beating the story campaign.

Overall, I have to say that I had fun with Bloo Kid 2. I think it’s an ideal game for younger audiences and the more casual players. With its extremely modest price tag of only £3.49 I think it’s worth giving a try.