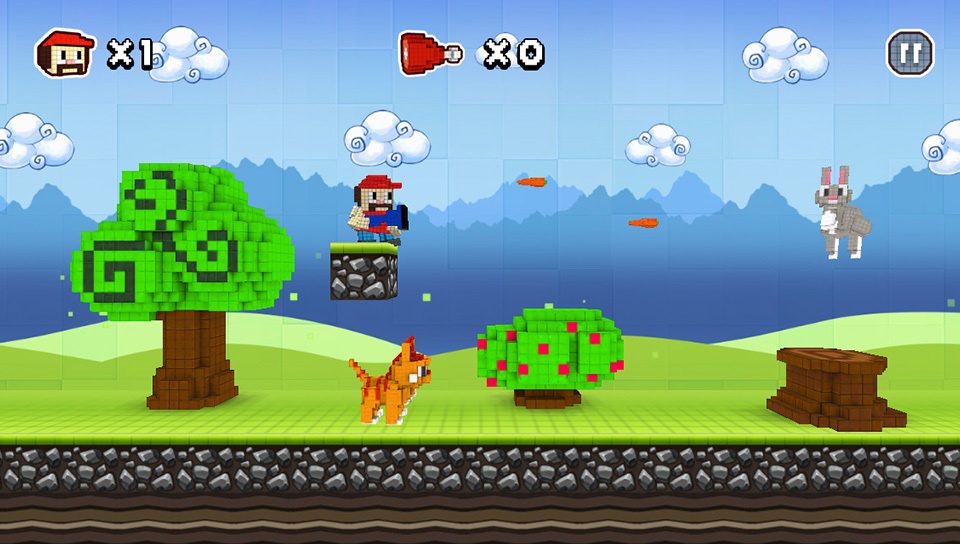 Created by Lemondo Entertainment, Pixel Hunter is a 3D voxel platformer that harks back to the golden age of the platformer in more ways than one. You take on the role of a hunter who returns to his cabin in the woods to discover that his most precious possessions, his guns, have been stolen by the game’s bosses. On a quest for vengeance, he sets out across five worlds to get them back and take down anyone who stands in his way.

As a side-scrolling platform game, the controls are pretty simple. The left analogue stick on the Vita will move the hunter, while X and Square can be used to jump and shoot, respectively. Your goal is to navigate the various dangers in each level, collect chunks of meat along the way and reach the end without dying. It sounds easy but the gameplay mechanics at times are stacked against you, and before you know it you’ll have blitzed through your three lives before you’ve even made near the boss at the end of the world.

The game originated as a mobile app, complete with microtransactions. If you were to lose all of your lives, you’d need to buy meat in order to activate a continue and push on with your quest. Thankfully, this aspect has been dropped for the console version so instead you’ll have to kill enemies with your gun in order to build up your meat supplies. It also explains why the odds seem stacked against you, with clunky controls and bad level designs often causing you more harm than the enemies, bosses and environmental hazards combined. 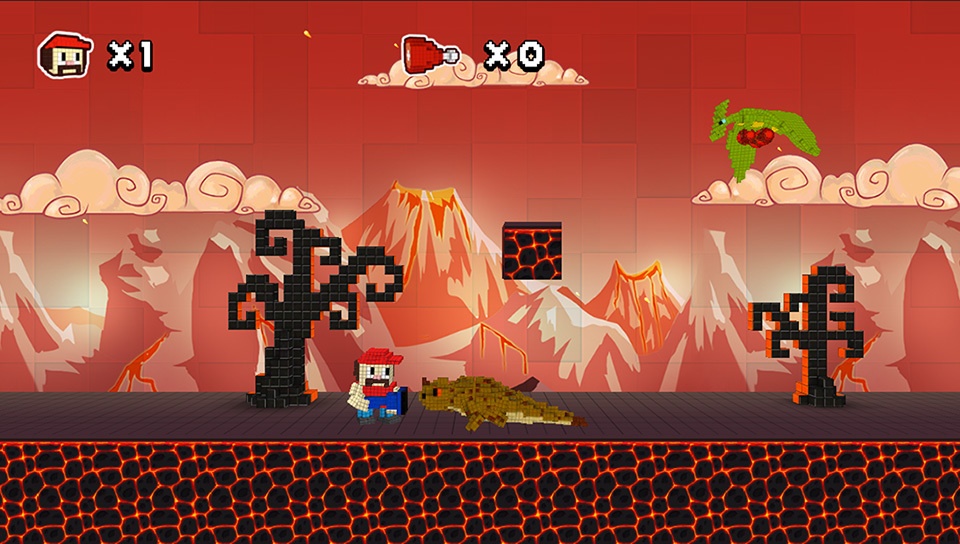 Levels designs are familiar, ranging from the wild forests to the snowy arctic and beyond. Taking cues from Super Mario Bros and Sonic the Hedgehog, each one comes with it’s own series of enemies and traps that will try to stop you on your quest. But Pixel Hunter isn’t just inspired by retro games from twenty years ago. One level features a rotating 3D platform which looks and feels like it has been lifted out of the 2012 hit Fez, while another level has you running away from a boulder much like a similar scenario seen in Crash Bandicoot. These are nice little nods to the genre as a whole but unfortunately they don’t make up for the many shortcomings this game has on offer.

Speaking of old-school platformers, the titular character of the game bares striking resemblance to Nintendo’s very own poster boy. Sporting a red cap, a handlebar moustache and a similar colour scheme, you’d be forgiven for thinking that the hunter is some sort of distance relative to Italian plumber himself. The twist comes in the form of the hunter’s health which is monitored by the more Mario aspects of his persona. Taking damage will see your hat, hair and moustache fall off. Enemies will drop these items should as and when you need them, but it’s hard to say if this is some sort of cheap gag at Mario’s expense or simply a coincidence.

The game’s loading screens proudly tell you to refer to clips on Youtube should you run into difficulty with a boss – an instruction I’ve never seen before. The boss fights themselves aren’t complex enough to justify spending the bandwidth, but that doesn’t make them any less frustrating. Some will block your attacks, forcing you to rethink your strategy, while others will jump and flop around the screen making it difficult to see these battles through to the end. As with most platform bosses, timing is everything, and once you’ve mastered your opponent’s move sets then taking them down is a doddle, at the cost of quite a few lives in the process. 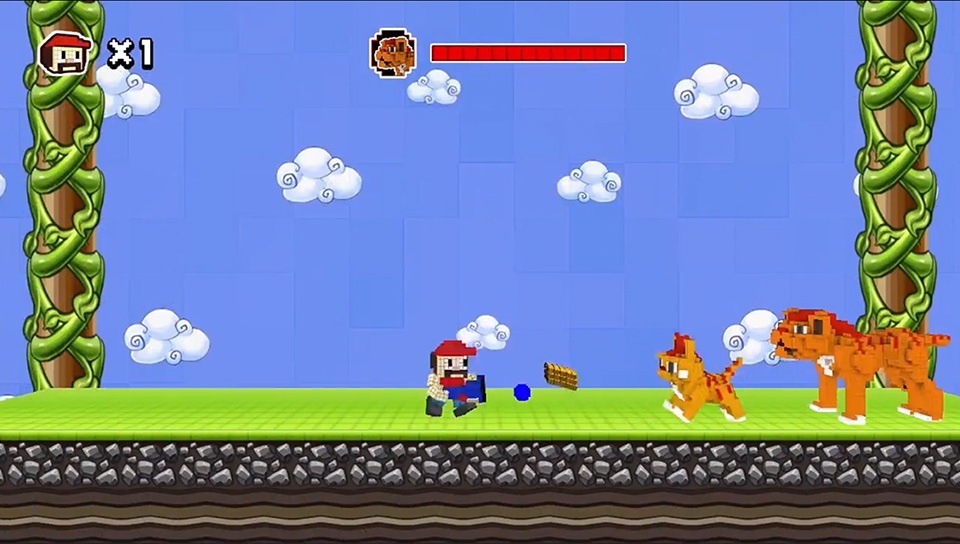 Another unsurprising comparison is that Pixel Hunter owes some of it’s aesthetics to Minecraft. The blocky voxel look of the game almost makes it look like it was created from the construction sim which perhaps adds to it’s appeal. It runs rather smoothly with very little signs of frame rate drop or glitches stopping progress. Unfortunately, despite the varied worlds on offer, the design of each level grows repetitive, with the same background items and environmental objects constantly reappearing throughout. The whole palette scheme is rather bland and with the music on a constant loop, it’s enough to drive you insane – that’s if the unresponsive jump controls or ill-placed enemies haven’t gotten to you first.

Pixel Hunter seems to hedge its bets by taking various aspects from other games in order to entice players from all generations of gaming into it’s blocky 2.5D world. Simple to play, there’s some initial fun to be had with the title before poor level design, frustrating controls and annoying enemies start to chip away at your patience. While it’s great that the Vita version has removed the microtransaction element and made the game easier on the wallet, it doesn’t make it any easier to play. A brief encounter with the game will surely lead most of dig out their retro consoles and instead play the better designed, highly addictive and much more enjoyable champions of the genre.