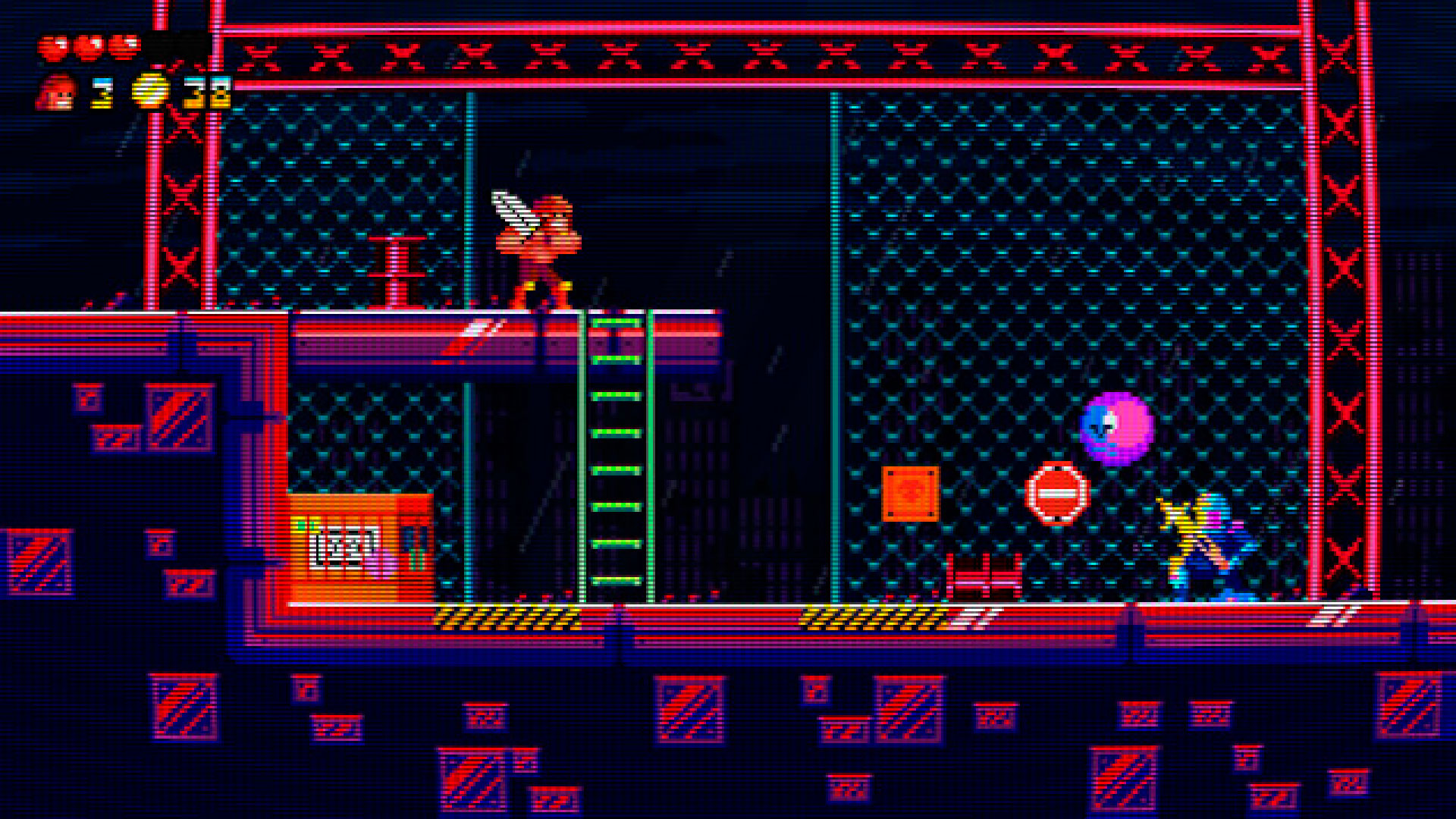 Cybarian: The Time Travelling Warrior is a short, yet interesting, title. A pixel-art platformer, it tries to hearken back to the days of old arcade classics. Can it fit in nicely into an 80s themed collection, or is it an imitator that falls flatter than action heroes not on steroids?

First things first, this is a short game, no doubt intentionally designed that way to thematically match old arcade, coin munching games. Zapped to the future, thanks to finding a legendary sword, the player is tasked to take our hero through a few stages, platforming and slashing away against future baddies. That is the story, nothing more and nothing less. Just like an 80s, NES throwback, there are no reasons why you’re choosing to kill people, or why they see you as an enemy other than the huge sword being wielded.

The gameplay is quite simplistic, which is fine for an arcade-style game. Jump, 3-hit combo, and later a dodge roll and sword throw are all the skills the player gets. On easy mode, the roll and throw need to be unlocked through story progression, however on hard mode it is unlocked from the start. Other than a smaller health bar, hard mode actually feels easier as some enemies are simpler to handle because of the unlocked skills. Jumping, the most important feature, is handled smoothly. They nailed the control and feel, allowing you to land Cybarian on a dime. Especially on easy before the roll dodge is unlocked, the jump function is the players first line of defence. 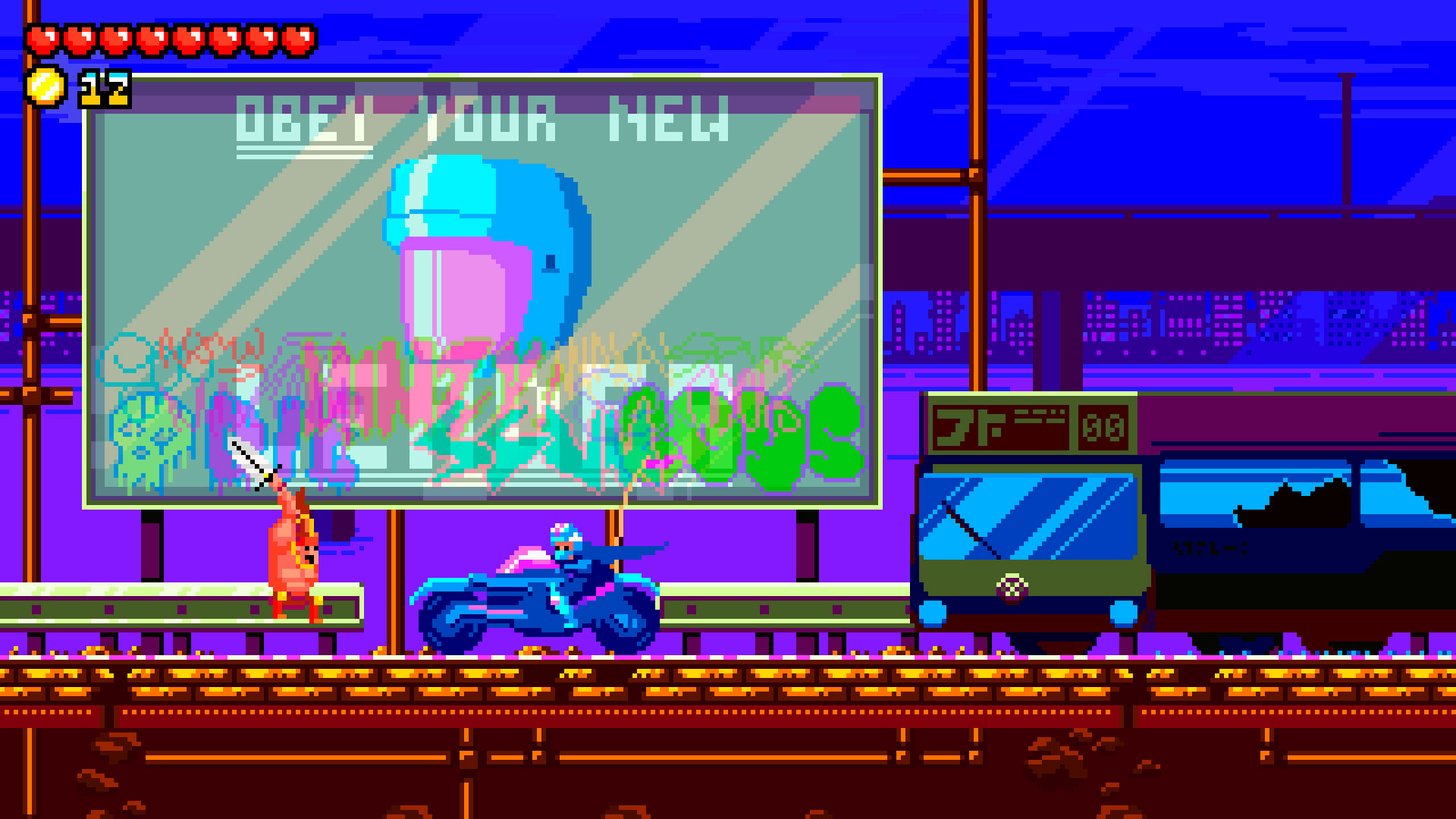 Just like an arcade game, Cybarian is designed to frustrate players with its difficulty. It is quick to get used to the patterns required to transverse levels, however the initial trial and error will be annoying considering there are no checkpoints until the stage’s boss. Thankfully, there are infinite continues and it does not send the player back to stage 1 unless the game is turned off. Bosses, like the levels, are designed with a pattern to follow. Find the pattern and they’ll be a piece of cake. There are some health pickups but they require coins, and most times you’ll just get a single heart for your health meter. 1 hit equals 1 heart so be careful.

The best part about the game is the pixel art. It looks good, and the contrast between good guy, Conan-wannabe and bad guy, future cop does not look out of place. I actually took a few moments to admire the backgrounds to the world the developers created, as it takes up the bulk of the game’s lore. It comes off as a mix of rough and tumble cyberpunk, cleaned up with a heavy helping of 80s camp due to the enemy design. 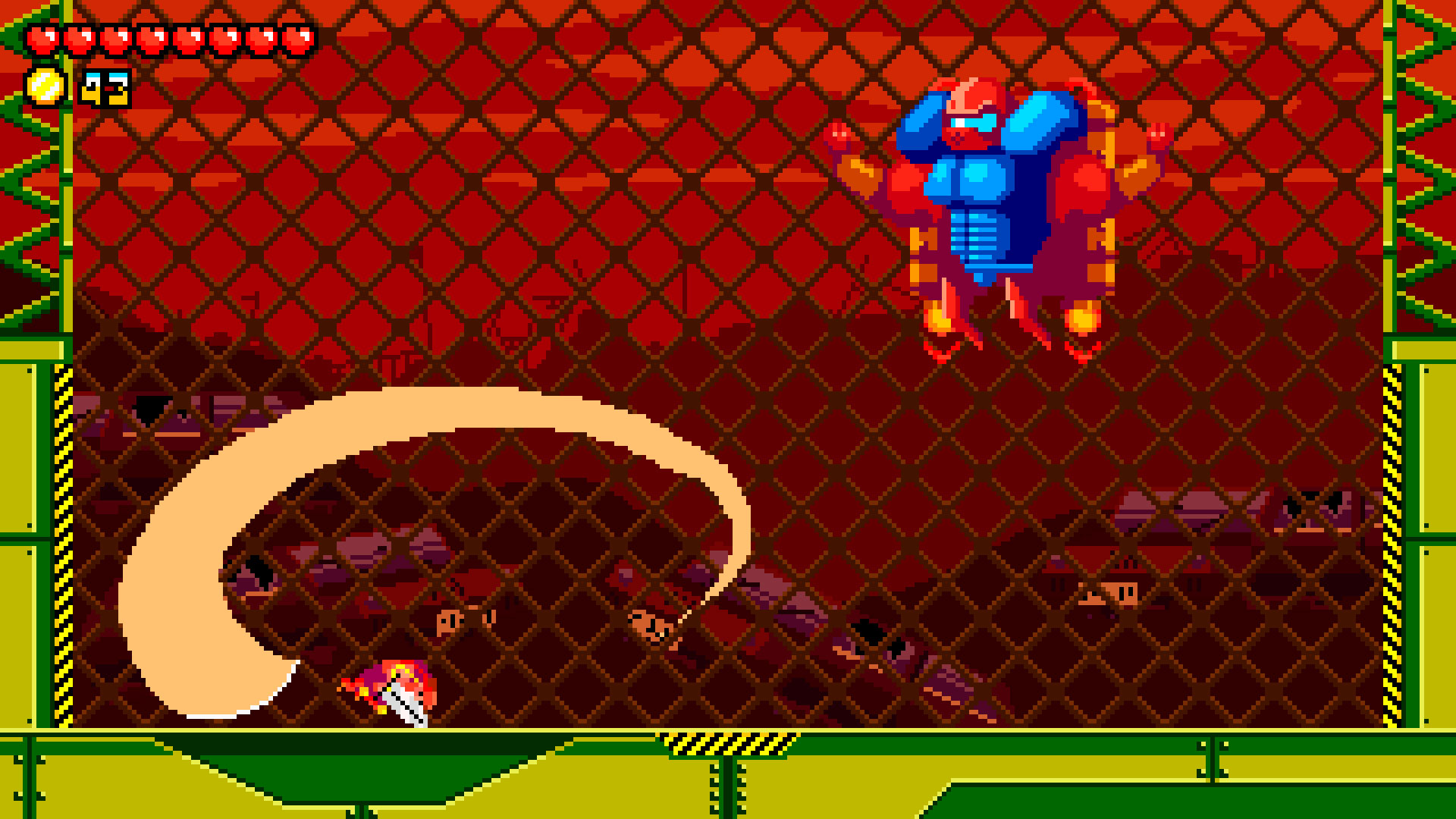 The music in the game is okay at best. Going with an 8-bit style soundtrack, there are no Megaman level themes that’ll have people wanting to look it up on YouTube. The tracks are not repulsive though, just blending into the background as you’ll be more concerned with dodging an enemy attack than listening to the tunes.

Cybarian can be completed in an hour or two, and as someone who is not a fan of platformers, there is a sense of accomplishment from beating the stages. However, there is nothing drawing the player back for a second round. As mentioned, the soundtrack is just okay, and there are no colourful characters or lore to make the player care. Other than the hardcore platformer crowd, the bulk of people who would be interested in this game are the trophy hunters. It is an easy platinum, so easy that of the time of publishing this review it stands at 90% of all owners on the Vita. If you’re a trophy hunter, and don’t care about platinum rarity, then it is worth the pickup to boost your score.

There are exceedingly worse games on the market for those needing a quick trophy fix. For the rest of the public, if $5 for a couple hours of entertainment is worth it, there are far worse games out there.

REVIEW CODE: A complimentary PS VITA code was provided to Bonus Stage for this review. Please send all review code enquiries to press@4gn.co.uk.

Cybarian tries to travel back to the golden age of arcade games. While fun for a few hours, it does not have much to warrant coming back to it in the future.