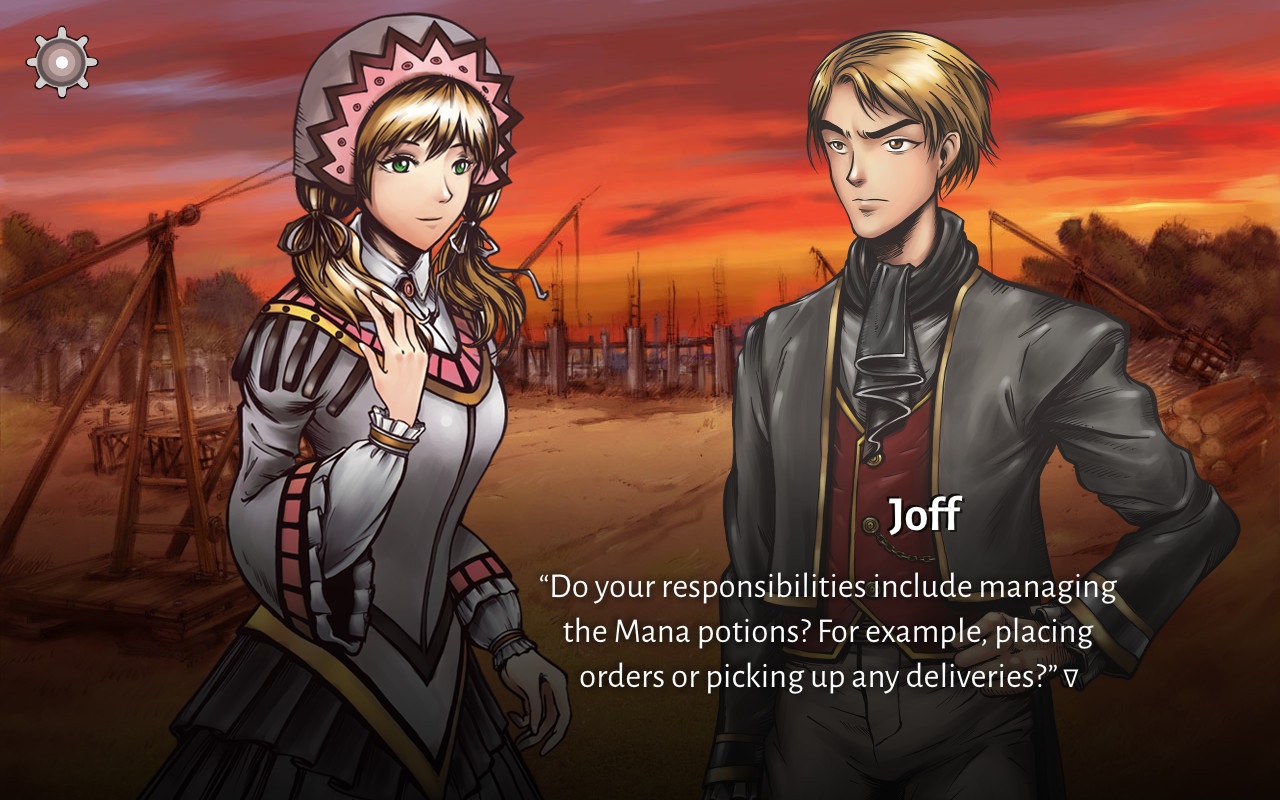 One Small Fire at a Time (which we’ll shorted to OSFT) is the second title from Kidalang, who brought us An Octave Higher as their flagship visual novel some time ago. OSFT is a prequel to An Octave Higher, set a couple decades before the first game’s story. Both games take place in the world of Overture, where magic exists and is widespread throughout the kingdom. In OSFT, you primarily follow the view of Janis, a young girl who is growing up in a “madhouse,” where her mental condition is not being able to use magic.

This visual novel takes on two different perspectives throughout the game, switching between Janis’ first person narrative and a semi-omniscient view of whoever else the game decides to focus on. The tone shifts wildly as soon as roles are changed. Whereas the 3rd person view gives us some balanced and very wide explanations and dialogue, Janis is full of self-loathing and festering disdain for her surroundings and the people in her immediate vicinity. It can be jarring and makes the player a bit uncomfortable with Janis, especially as her “lunacy” seems paltry compared to the others around her. And given how much we focus on mental illness, it’s hard not to take umbrage with our main character professing to be “mad” in a very casual and dismissive sense. 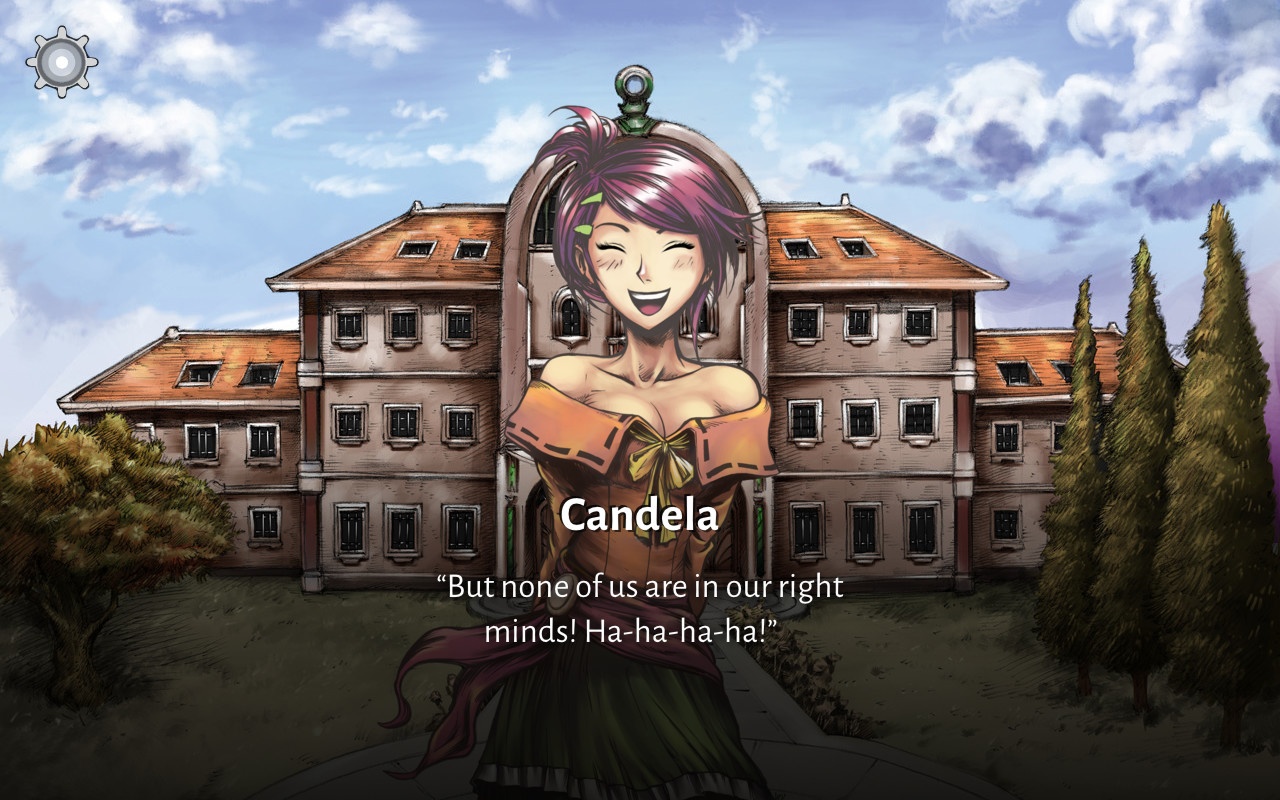 Kidalang makes their visual novels with a wink and a nod to society not-so-subtly injected into the main plot lines. With An Octave Higher, they addressed the disparagement between the rich and the poor, the have and have nots. OSFT does it’s best to tackle the idea of mental illnesses and how those who are diagnosed are treated by the world at large. At least, I believe that’s the intention. The theme of different types of disorders is addressed repetitively and rather heavily, with large chunks of exposition being given to explaining what the kinds of mental illnesses are, how everyone in the game seems to be suffering in some way and how society should be more aware and caring of what is normal and not normal.

The art style is something that does do wonders for OSFT, and does a bit of the heavy lifting to help distract when the text gets a bit too verbose. Kidalang clearly loves the visual novel genre and does their best to give a nod to the Japanese culture that spawned the type of game as we know it. I enjoy the design of everyone I see, and the backgrounds are well developed to give a great idea of how Overture and the asylum, Eclipse, would appear. Given that the game takes place almost exclusively at the madhouse (except for some very brief jaunts into other areas), you may feel a bit disappointed there isn’t more variety to the locales.

The soundtrack, to it’s credit, is a beautiful if simple mash of classical pieces and modern takes on orchestral music. Most of it does a great job of framing the scenes and adding extra tension, sadness or quirkiness to whatever is playing out in front of me. My biggest complaint there is a scene where characters are staring at the moon is honest-to-goodness accompanied by a variation of Moonlight Sonata, which is so on the nose I think I caught a cold from it. I don’t mind things being a great match, but I don’t even think the music necessarily fit the conversation that unfolded. It was just about the moon, and here’s a moonlight piece. Not my favorite moment.

As a prequel, I would be remiss if I didn’t address some of the things that were done in this second game that the first missed. First of all, the story-line makes a LOT more sense. An Octave Higher suffered from having the entire second half of the game hidden behind a series of choices that seemed banal but needed to be done just right in order to double the length of the story. OSFT flows very naturally and you end up at the end of the game in a pretty orderly fashion. An Octave Higher also spent a lot of time talking about the science of magic and how important the formulation of spells were, but ultimately did nothing with this information other than educate the player about the pseudoscience that exists in Overture. With OSFT, the long form dialogue about mental illness and questions of morality do add some weight and interest to the game overall, and actually made me more vested in this story than the original. Kudos to Kidalang for that. 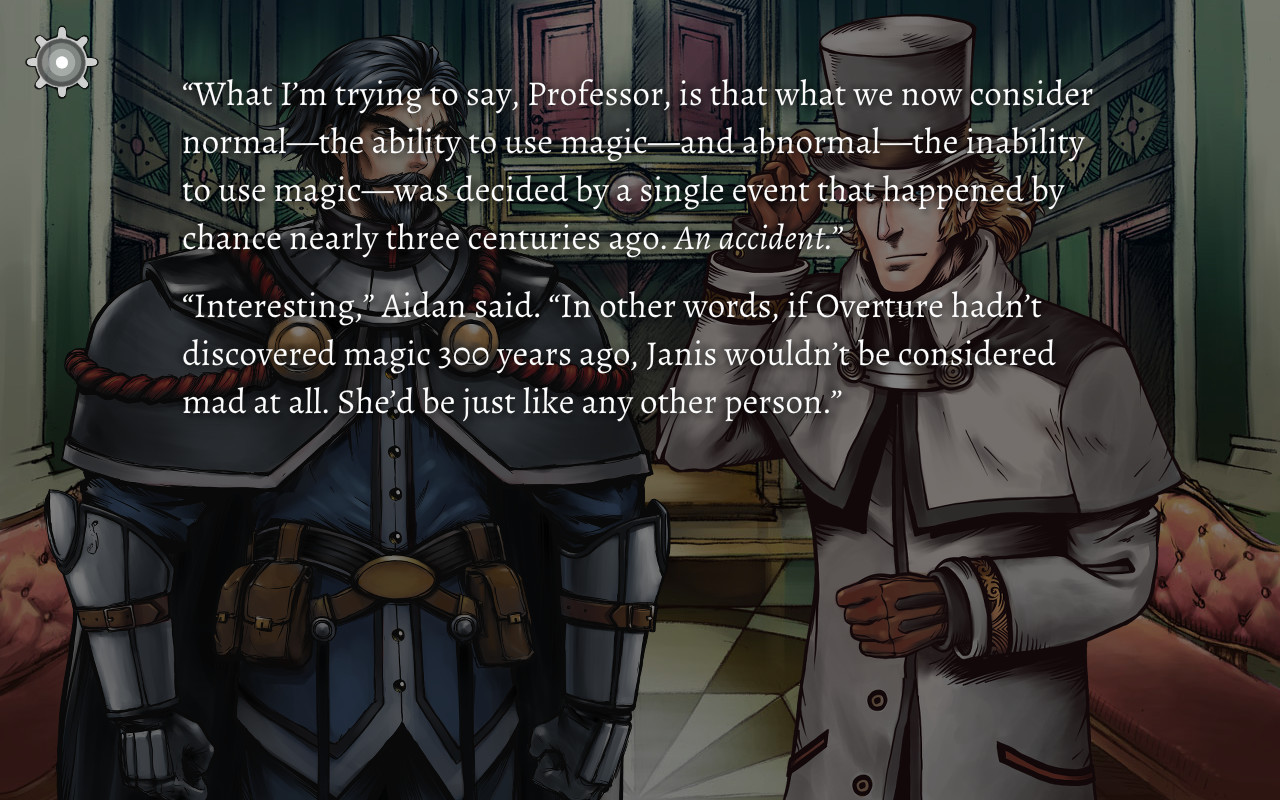 Ultimately, however, the story was too short and too simple to really get worked up about. The choices were obvious for everything: if my options were “be a friend” and “don’t be a friend,” I always chose the friendlier route and, as a result, got the “True Ending” my very first time through. The relationship meters that Janis slowly fills throughout her choices almost seem unnecessary. Even with some generous time allotted to read the long passages, I did my first play through in just over two hours, and was stunned that I nailed it on the first go. The fast-forward feature allowed me to go back and skip ahead to the pivotal moments and go against my gut, allowing the unlock of a “bad” ending fairly quickly, and I pretty much lost steam after that. The script sometimes gave way to absurd and strange moments, like trying to emulate Japanese relationships, weird erection and potty humor and rather graphic deaths, both written and drawn. There are some things that I would screen capture simply to share out of disbelief, but nothing that I would absolutely say sold the experience.

If you have played An Octave Higher, OSFT has a much higher appeal, as a handful of characters appear and we see a bit more about their back story. However, knowing who exists in the future really ruins some of the dramatic tension that may float around if you were totally unfamiliar with the characters. Additionally, some of the more interesting points of An Octave Higher, such as the cultures to the West of Overture, are never addressed in OSFT, leaving some fans disappointed that the world is being explored on such a tiny scale. So it leaves me in a predicament: can I recommend this game for VN fans who have never played the original? I would have to lean towards no. It’s wordy but short, it’s broken up a bit strangely, and the number of choices are shockingly low. For a gamer looking to break into the genre, it has greater potential, but I would still think playing An Octave Higher first would make OSFT a more satisfying experience. Consider getting a two pack during the summer sale and knowing that the second is better than the first, but only if you have something to measure against.