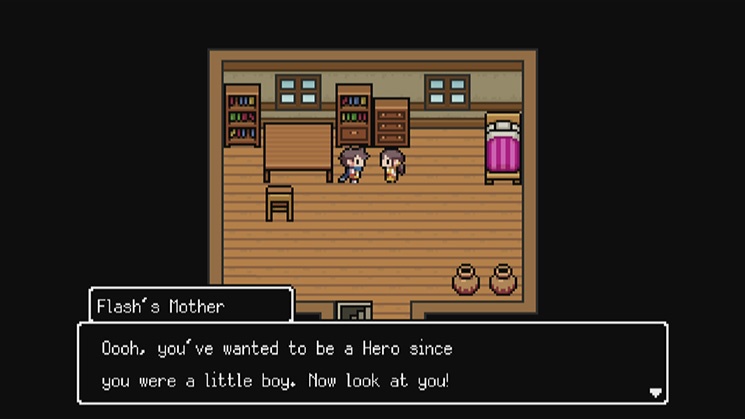 In a world overrun by demons, a group of four heroes arrives to save the day! There’s only one problem: right there, at the climax of the grand adventure, your main hero, Flash Back, is stricken with memory loss. He can’t remember how he got here, his signature move, or even the reason he’s fighting the big, horned demon before him–and as such, cannot fight at full strength. In the next five minutes–the longest five you’ll ever see, stretched across an RPG adventure that would usually take 20+ hours–it’s up to you to reclaim your memories and defeat the Demon King. The clock starts now.

The Longest Five Minutes plays like a mixture of a visual novel, where you make choices that effect the story during the present, and a RPG where you are able to take control of your character and his party in order to explore the remembered location and engage in turn-based combat. Time works differently while switching between the past and present. During the present, a timer counts to five minutes in slow motion as the heroes interact with the Demon King. When you relive Flash’s memories, time within that isolated instance moves forward in a bubble so that no matter how much time you take, only a predetermined amount of time will have elapsed in the present.

Thus, the game takes place almost entirely in the mind of the main character, Flash Back. This is an original concept, but is it one that works well?

On one hand, The Longest Five Minutes is very generic as far as RPGs go. The flashbacks serve as small episodes to break up the Demon King cutscene to build backstory, and their sequential order is not necessarily chronological, but corresponding with what is said during that final battle to trigger them. In the past, you’re able to move around, purchase equipment, take on quests, and interact with the world as the hero remembers it. Each flashback has one main objective and some side objectives presented as quests, which are given by NPCs with exclamation points above their heads. These quests are typically fetch quests where you go to an area, pick something up, and take it back to the quest giver. The main objective that ends the flashback and brings you back to the present involves defeating a monster and/or making it to a specified area, though some shorter memories simply require you to read and decide how the main character will respond. 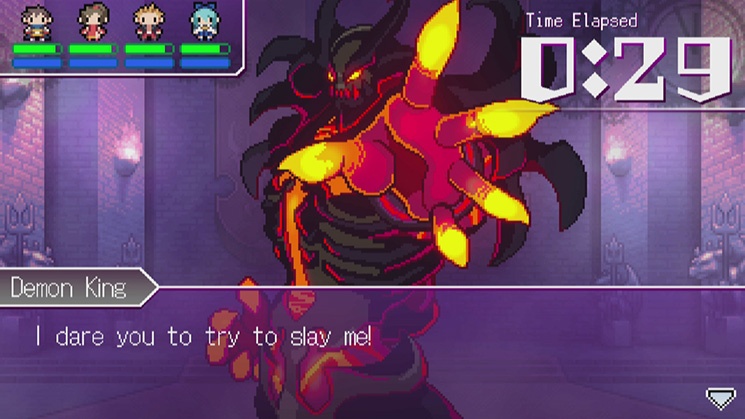 After you’ve completed a flashback, you’re rewarded with “reexperience” points which power up your present-day hero. You’ll get more points if you went out of your way to complete the bonus objectives, which will add to your “reexperience level” just as engaging in combat during flashbacks will. Your characters are assigned a level with each flashback, which is the “actual level” Flash and friends were during that particular point in time, but your “reexperience level” keeps track of how much you’ve done as far as regaining Flash’s lost memories. You’re able to re-attempt memories as often as you’d like from the chapter select menu and in some instances you’ll have to in order to complete all side objectives. The memory itself is effected by which side objective you complete in these cases, offering branching dialogue, so they’re worth a second attempt. Most of the memories will only take a few minutes to complete at best–especially if you’ve already read the base dialogue leading up to your decision making.

The art style is a bit of a toss up. Characters, though 8-bit retro, are expressive and cutesy, while the enemies (which look like rejected cartoon ideas) are hand-drawn illustrations. During the main character’s “That’s right! I remember…” epiphany moments, which are reminiscent of an “Objection!” screen from the Phoenix Wright games, the art style changes completely, giving Flash a more anime appearance. The Demon King, too, is drawn in an anime style, though he’s slightly pixellated. It’s nothing graphically demanding and the weird hodgepodge may deter those who judge a book by its cover.

The dialogue is heavy-handed, oftentimes stating the obvious or adding exposition that would not appear in natural speech. This is justified by the fact that without this exposition, the hero wouldn’t have the knowledge necessary to regain his memory, but that doesn’t make it any more interesting to read. There’s humour aplenty, but most of it relies on frequently brought up character quirks like Yuzu’s violent tendencies and abnormal strength. There are also, of course, your typical Japanese scenes like bathhouse peeping, though the heroines’ pixels aren’t particularly titillating. NPCs are generically named things like “old man” or “young child” which is perhaps due to the fact that the main character doesn’t know their names and therefore they don’t appear in his flashbacks. Unfortunately, this does nothing to create a world where you care about what happens should the Demon King be victorious. 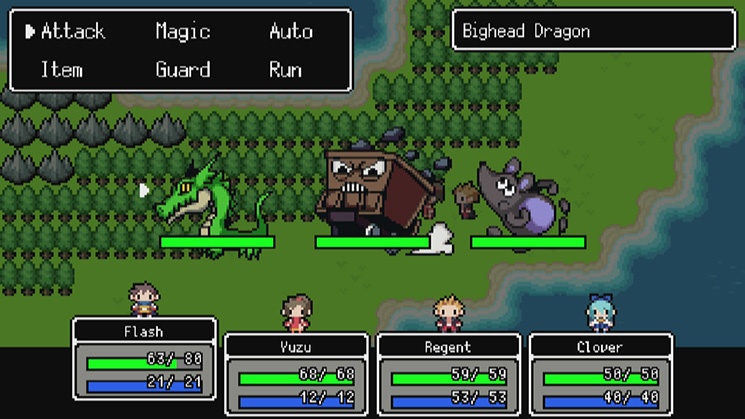 Though hopping around from memory to memory is a convenient way to cut out the uneventful middleman that is travelling a great distance on foot while slogging through random encounters, it also cuts out the sense of accomplishment associated with seeing that new city on the horizon. As such, The Longest Five Minutes goes from turn-based RPG to soulless task completion simulator. If you wanted, you could complete only the main objective, talk to none of the NPCs, purchase no new equipment, and do absolutely no party management and still complete the game. What’s left is the somewhat comical final battle, interrupted on occasion by some inane task.

On the other hand, the actual encounter with the Demon King is interesting and I enjoyed being able to make decisions that affected the flow of combat that weren’t part of your standard attack/magic/item/run battle menu. Sadly, these moments are frequent, but short-lived.

So-so. The blandness of the RPG experience that makes up the majority of The Longest Five Minutes can’t be saved by the interesting game concept. In cutting out all the fluff, the game leaves only quest-based repetition and very little of the engagement–the memorable characters, locales, and strategic party management–your typical RPG adventure has to offer.