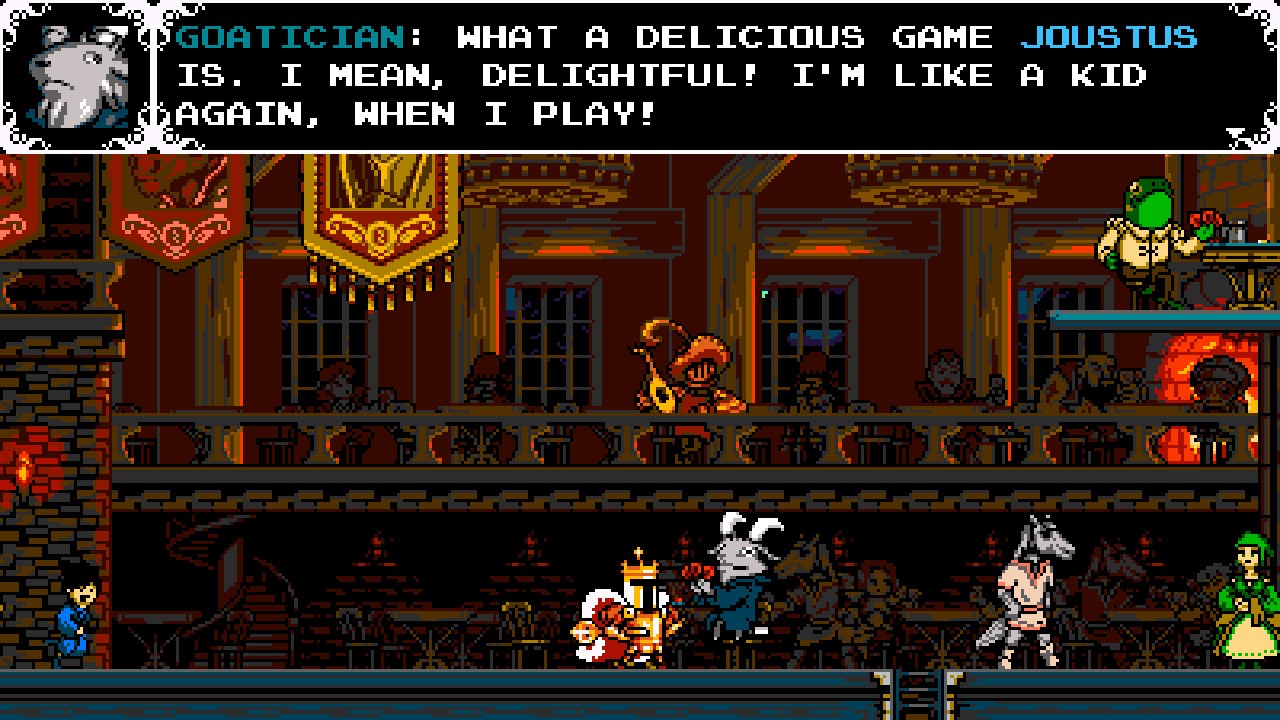 It’s a tad bittersweet to essentially say “goodbye” to the core Shovel Knight franchise. When the game first launched on Kickstarter so many years ago, a lot of people were not in a great place regarding crowdfunded games. Since those days, we’ve had plenty of hits and misses (with Shenmue III being one of the most polarizing products ever), but Shovel Knight still stands as a picturesque beacon of what happens when a great idea has a dedicated, solid team behind it. Fans who invested in the original have been rewarded again and again with additional storylines and even a pretty weird but fun arena fighter, and we’ve seen the Shovel Knight himself appear in various games across multiple platforms. Now, this love letter to the NES generation is finally putting a ribbon on the first wave of its success with the last storyline being added to the Treasure Trove (and, of course, as a separate release). Time to revel in the delusions of grandeur that can only exist with The King of Cards.

Like the other offshoot games from Shovel Knight, the core formula remains the same with some important tweaks. We are, once again, treated to a 2D, sidescrolling platformer that relies on tight control response, some very familiar level design and the risk vs reward system of destroying checkpoints to get more cash (but potentially ruin your day if you fall down a hole 9/10ths of the way through a stage). At the core of the game is the King Knight, arguably one of the most interesting of the Order of No Quarter, as he tends to be quite regal, self centered, and definitely not an actual king. In this very fun but offbeat origin story, we see the King Knight get totally caught up in the newest fad in the kingdom: a card game called Joustus, which has grown to popularity so vast that there is a massive tournament to be held. The King Knight, determined to become the grand victor of this game and, as such, their king (note: still not yet a king) sets forth to defeat the three Judges of Joustus and prove his worth and glory. But, like all good boys, he drops in to see his mother on occasion and get a home cooked meal, because who doesn’t like that? 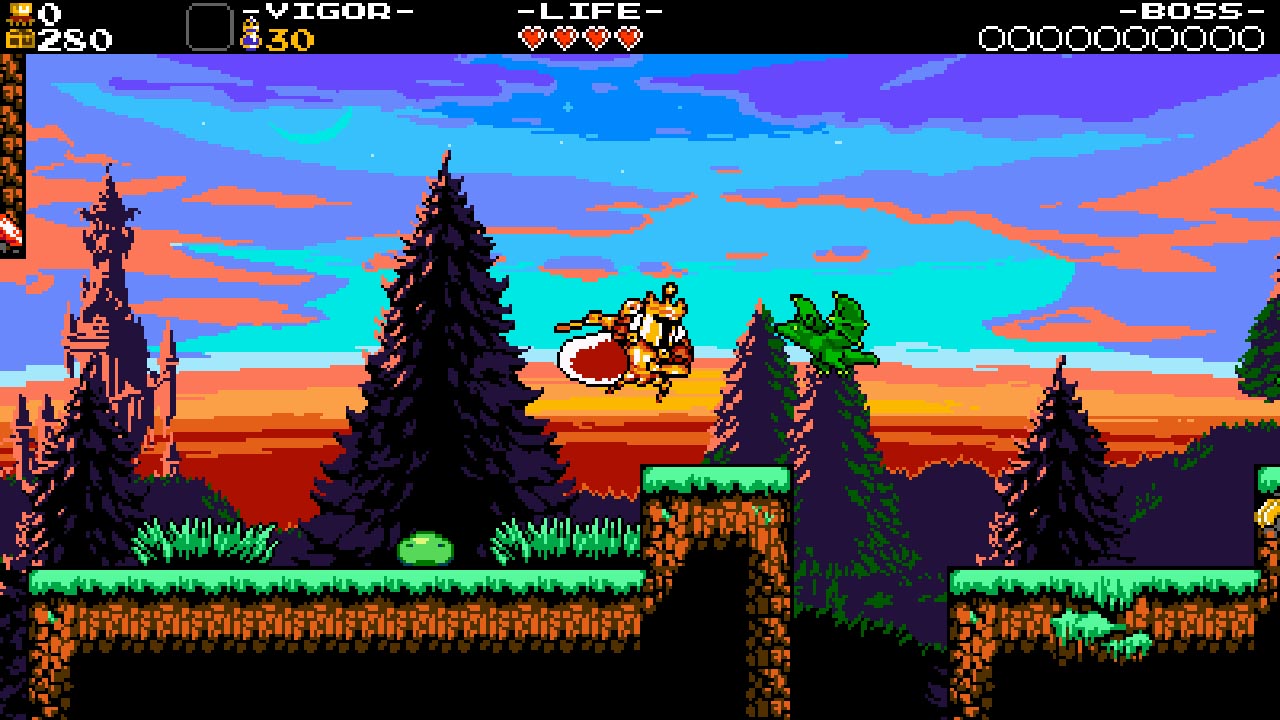 Similar to Specter of Torment and Plague of Shadows, there’s enough here in King of Cards to set the game far apart from the original Shovel Knight. Like the other Knights who’ve had spinoff games, the King Knight moves and attacks far different from the original Shovel Knight. The King Knight uses a dash attack that turns into a very powerful and interesting spin jump when utilized correctly. When you slam into an enemy or the right kind of wall, the King Knight will shoot up in a sort of pirouette and begin spinning, which is the cue to start drilling through soft grounds or bouncing on the heads of enemies. A great example of how this can be used comes with the first mini boss, the bubble shooting dragon in the first stage. With the other Knights, it’s been a touch-and-go sort of affair to attack, but, with King Knight, it’s a matter of one dash followed by about eight successive head stomps that finishes the job without any strife. Simply put, when King Knight is on, he’s probably one of the most satisfying of the offshoot characters to use.

Naturally, Yacht Club went ahead and refined the different stages and added others to make the play of King of Cards both plausible and challenging without being completely insane. Just as Specter of Torment relied on characters to get good at the diagonal slashing to navigate the landscape, you need to understand the King Knight’s nuances very quickly to get anywhere in this game. The dash attack has a very limited range, but the ability to chain it into additional bounces and strikes presents in ample amounts. The grass covered walls are immune to your movement style, but bare rock and soil allows you to bounce up and spin with the greatest of ease. It’s by no means the easiest way to move about, but it’s adaptable, and longtime fans of the throwback genre and style will pick it up in no time. Also, the movements are helpfully broken up with the inclusion of heirlooms (this game’s version of relics) that include different ways to attack as well as move about. Honestly, me and the bubble frog became very good friends once I found it, because floating along certain areas just made for a far more pleasant ordeal. Add in the single use “Royal Decrees” that you can buy to help along a stage in different ways and you’re able to dance most of the way through the game. Again, you gotta get used to the idea that your main attack requires you to be on the same plane as an enemy (or at least spinning from a previous attack), but you can adjust easily enough. 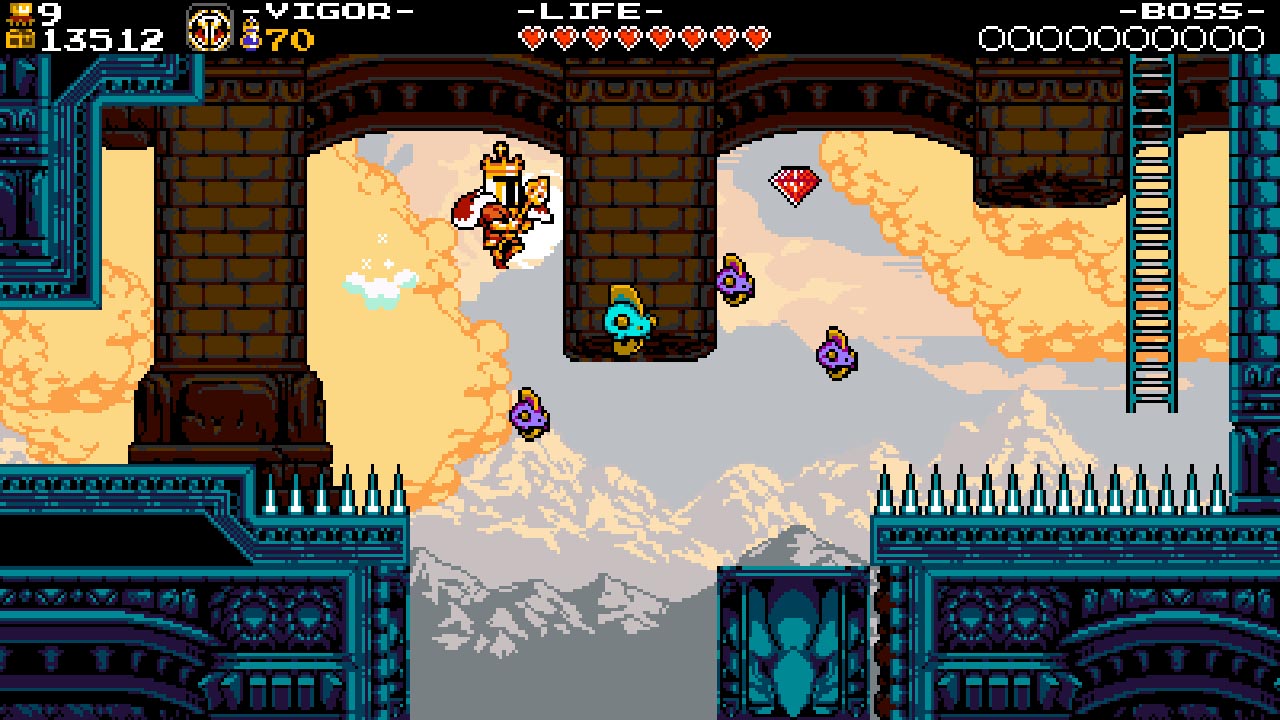 The biggest rub of King of Cards has got to be the main plotline/mechanic, the card game Joustus. Naturally, with any game that introduces something about card games, you gotta get down and dirty and play once in a while, sometimes allowing that mini game to overtake your life. The game asks you to push gems around with cards, which means directional cards, which means I started having Final Fantasy VIII flashbacks, but the similarities aren’t that strong, thankfully. You get more cards as you play more, the plotline does require you to actually get good at the game, and it’s something different. It’s not bad, it’s just different, and I think it probably would land well with most people. The problem is that I wanted to focus solely on the platforming and adventuring, because that’s what I like best, and I don’t like stopping to drop cards down to try and win gemstones. It’s a very minor, niggling dislike, but it makes the game less fun for me overall because it’s not my forte.

Having said that, King of Cards is still a solid entry into the entirety of the Shovel Knight saga, and one of the funniest to watch and follow. The appearance of other members of The Order of No Quarter shows the story development, and a haughty character like the King Knight is delightful to watch and follow as he ascends to his own delusional grandeur. I think and sincerely hope that we might see other titles in the future that focus more on the other Knights, but, if this is where the Treasure Trove wraps up, I’d say that everyone got a great final chapter for their purchase, and got way more bang for their buck than anyone could have anticipated. If you’ve been picking up this saga bit by bit, I can honestly recommend getting this one (more than Plague of Shadows, certainly), and urge you to enjoy it from front to back in all its glory.

Oddball mechanics and bizarre storyline should make this game a mess and a chore, but, instead, it’s honestly a light, fun and breezy romp back to front.