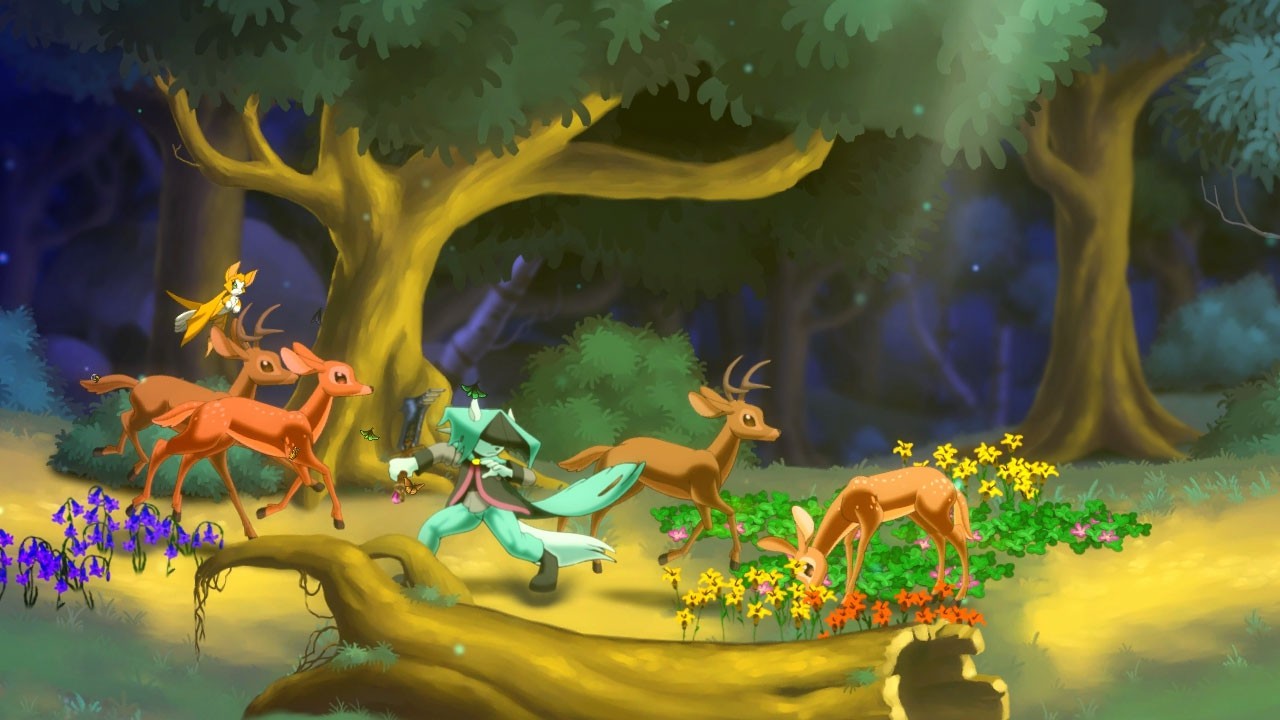 Since its release, the Nintendo Switch has become home to many third-party and indie-developed titles from previous console generations. Thanks to its status as a portable hybrid console, the Nintendo Switch has brought many of these titles to a brand-new generation of gamers, breathing life back into these forgotten franchises. One such game being the focus of today’s review, Dust: An Elysian Tail by Humble Hearts. This action RPG originally found its home on the Xbox 360, but the question remains: how does this game hold up among the myriad of Nintendo Switch indie titles? Well, there’s only one way to find out.

Dust: An Elysian Tail follows the titular protagonist Dust after he awakes in the woods without any memories as to who he is or how he got there. There to greet him is a giant talking sword – which is suspiciously reminiscent of a Keyblade – and a yellow, talking cat-bat (otherwise known as a Nimbat), Fidget.

To learn the truth of his past and unravel the mysteries surrounding his memory loss, he sets out into the world with his newfound allies and sword in hand. However, before their quest can truly begin, the trio encounter a horde of monsters – monsters that recently began attacking a nearby village in a suspiciously coordinated manner.

Being the hero that he is, Dust sets out to uncover the truth behind these monster attacks and, in doing so, begins the main adventure that underpins Dust: An Elysian Tail. 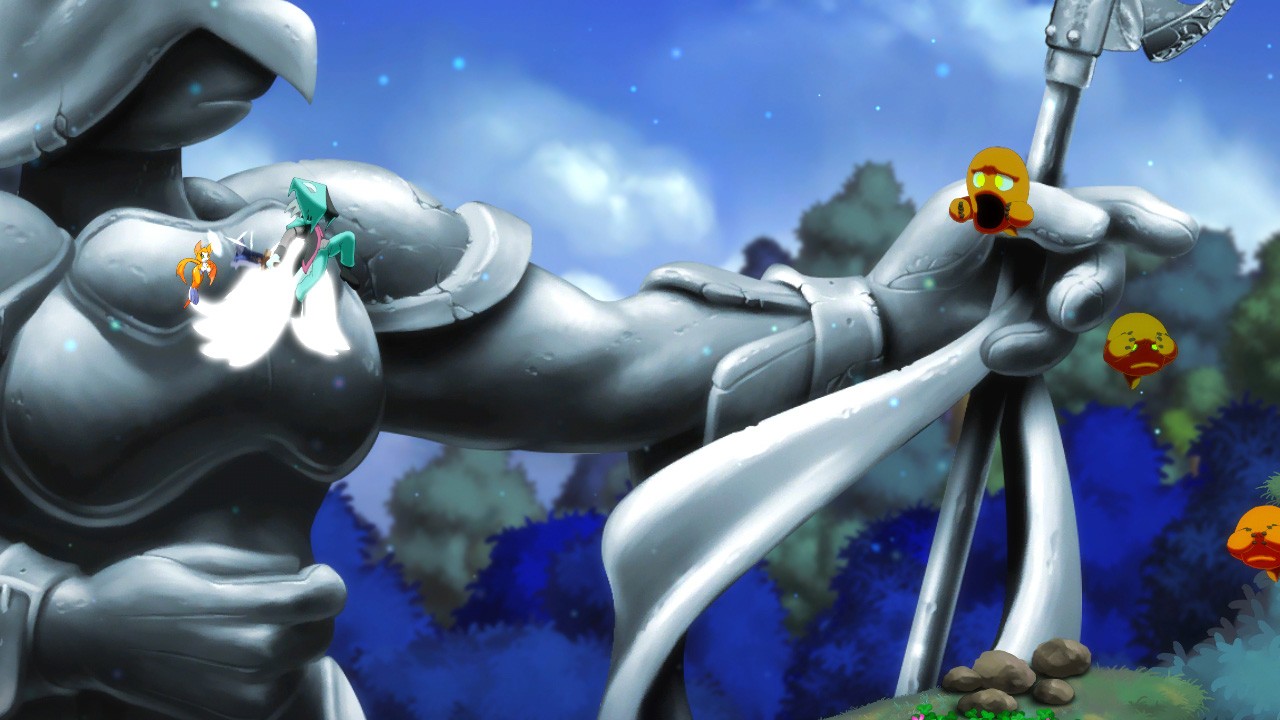 As far as stories go, Dust: An Elysian Tail is a satisfying if slightly convoluted one. Despite there being a few moments where players could be left somewhat confused, I never found myself overwhelmed. The lore of Dust: An Elysian Tail melds beautifully with the story, making for a world that feels well executed and realised, particularly in the more heartfelt moments that spring up from time to time.

Combining the excellent lore that permeates this game, Dust: An Elysian Tail does a fantastic job with its entire visual aesthetic. Dust: An Elysian Tail has some truly breath-taking environments, ranging from blazing volcanoes to quietly serene forests. The underground areas in particular were some of my personal favourites thanks to the crystal cave aesthetic making for an atmospheric, yet serenely beautiful, gameplay experience.

Each and every character feels alive and unique. Designs pop with a vibrancy and life, with colour palettes draw you in, while still remaining subtle enough as to not distract from the action taking place. Dust is the perfect example of this. Dust is an almost entirely turquoise creature, allowing him to stand out from the background, while still being subdued enough to fit into any environment.

Speaking of action, what Dust: An Elysian Tail can boast as its most impressive aspect is its combat. The key lies in its simplicity and its surprising depth. The game gives you two main modes of attack – firstly your sword, allowing you to execute flashy combos that generally deal higher damage, but that has lower combo generating potential, or the use of Fidget’s projectiles that allow you to deal a massive number of hits with comparably low damage.

While this sounds simple enough, juggling damage and the number of hits becomes essential when you realise that the number of hits dealt increases an unseen exp bonus, with more hits equating to a bigger boost in exp gained. Honestly, being able to combine hugely flashy projectile attacks with satisfying and weighty combos was incredibly fun throughout and only matured as Dust: An Elysian Tail progressed and gave me new abilities to play with. 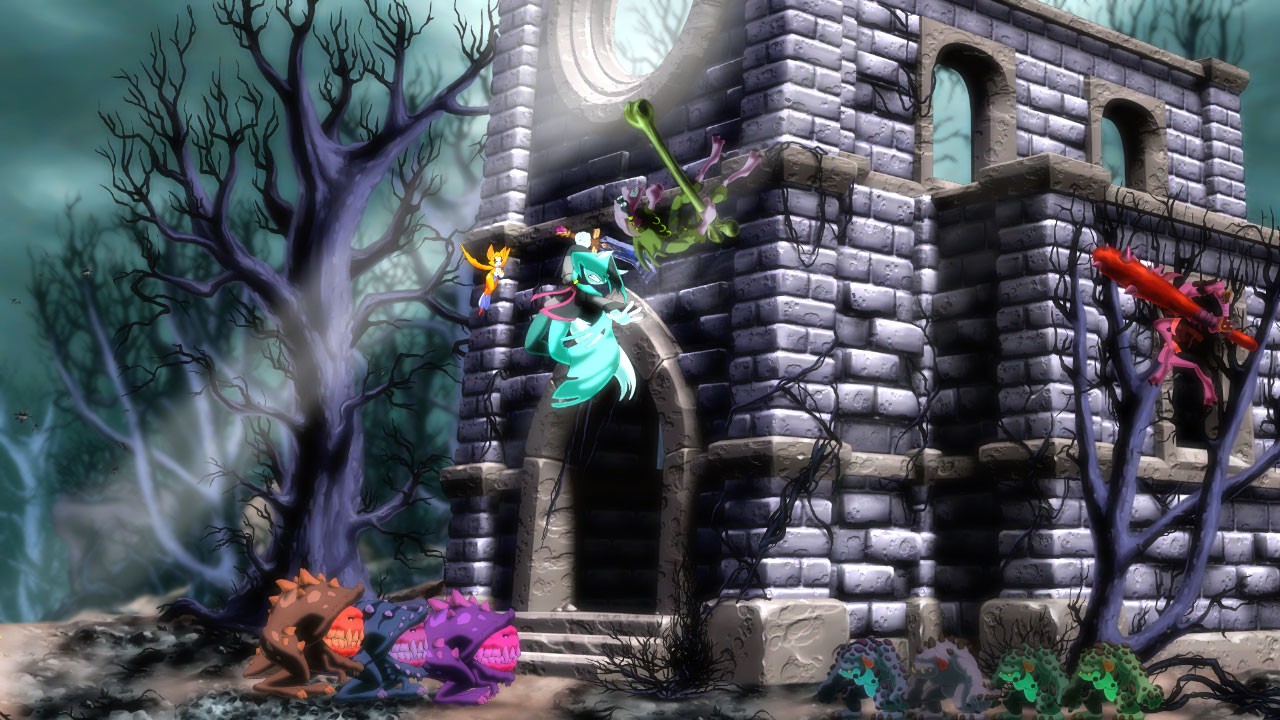 As far as the world goes in Dust: An Elysian Tail, there’s a lot to digest here. This game operates in a similar manner to most Metroidvania titles in that, to fully explore the world, you will need to have unlocked all the hidden abilities scattered throughout the game to uncover all its secrets.

In the prologue of the game, this is hinted at as Dust attempts to climb some vines, only to fall moments later. The truth is, if you only travel from point A to point B, Dust: An Elysian Tail is fun but short experience, clocking in at around 8–10 hours total playtime. However, the replay value on offer here is considerably greater than usual, especially with the numerous side quests and hidden temptations that lie just out of reach.

More than once I found myself diving back into previous areas in order to explore every nook and cranny – something the game is more than happy to reward you for doing thanks to the inclusion of 12 hidden “friends”. These “friends” are character cameos from other indie games such as Super Meat Boy, Bastion and Braid. After stumbling upon these friends, you’ll be granted a permanent 5% HP boost, adding further incentive for players to hunt them out. For completionists and gamers like myself who love character cameos in their games, this inclusion is the perfect fuel to drive players back into Dust: An Elysian Tail’s world again and again, long after the credits roll.

Dust: An Elysian Tail can be summarised in one sentence – it’s an absolute blast to play through! Slick and satisfying combat combined with an emotional story and a vibrant world that just oozes charm make for one of the best indie experiences I’ve had to date on the Nintendo Switch. As far as this game’s indie credentials go, I’m so very glad that Dust: An Elysian Tail found a new home on Nintendo’s portable console, as now a whole new generation can discover just how great this game is!

If you’re in the market for an action RPG with a heartfelt story, excellent visuals and satisfying combat, then you need to check out Dust: An Elysian Tail!