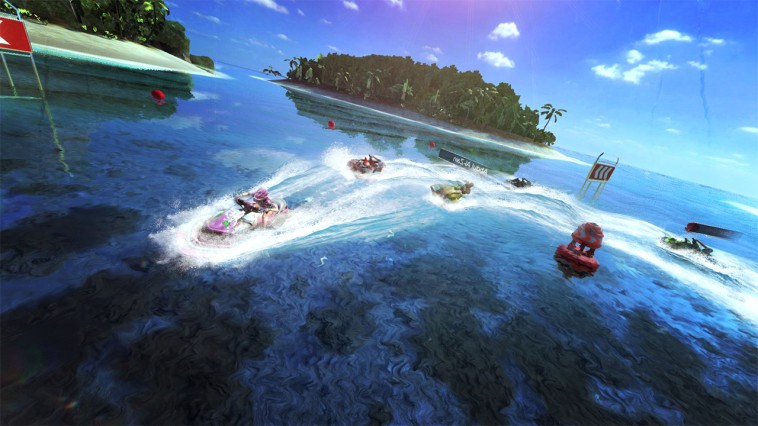 This is where things get a little tricky. As I’ve already taken a couple of looks at jetski racing here on the Nintendo Switch, I have certain expectations. As bizarre as  Riptide GP: Renegade was, there was a certain satisfaction that came with the game in terms of dystopian backdrop and kind of this borderline absurdist nature of the story. Something about combining Hot Pursuit with jetskis was fun in a ridiculous sort of way. However, it took only seconds for me to realize that there was a lot that Aqua Moto Racing: Utopia and Snow Moto Racing: Freedom had in common, and I don’t mean that in a positive way.

First and foremost, this particular type of game is almost generic in its presentation of what should be an incredibly exhilarating and ballsy sport, one that requires precision turning, breakneck reflexes and an almost flippant defiance of natural law and gravity. Instead, from top to bottom, there was this dismissive attitude towards the very game I was playing, and that shouldn’t have been the case with Aqua Moto Racing: Utopia.  Character creation is mandatory, but it has the same bland focus on “name, country, appearance” as its snowmobiling counterpart. After a quick creation, I was given the choice of racing, slightly different racing, and stunt racing. The stunt racing, I will concede, was significantly different and something that was a bit fun. You still have the same formula for setting up the combos as its snow brother, focusing on holding buttons and toggling tricks with different directions on the right joystick. However, since there is more freeform here and less pressure than in Snow Moto Racing, you end up getting better height and generally enjoying yourself more. There’s still a lot of inherent difficulty in making sure you land the stunts, but I felt there was more forgiveness when splashing into the water than when I crashed into the snow. I’ll do my best to not keep comparing the two games, because, technically, most people won’t buy both, but playing the two really gives a strange sensation of deja vu. 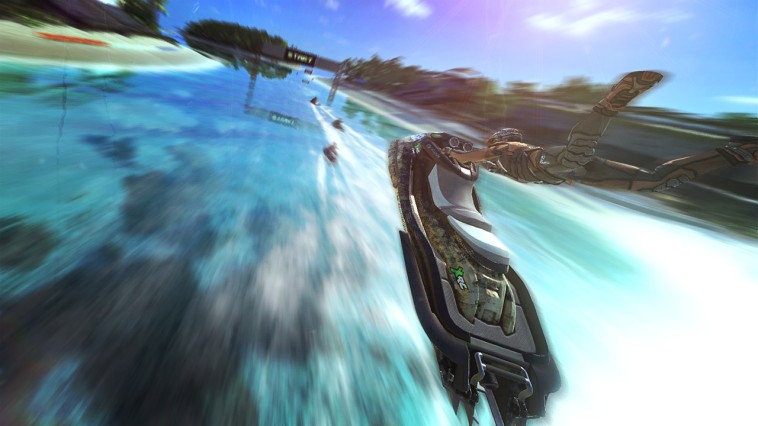 Getting into the main racing circuits, Aqua Moto Racing: Utopia makes some bizarre choices in the where and how a player has to complete the race. There is a straightforward race track, but you’re not allowed to focus on it in a straightforward manner. Instead, there are a series of buoys that you need to pass on either the right or left side, and this is a main crux in making the game frustrating for new players. It’s clear that there was some serious consideration in making the game appear and handle as close to “realistic” as possible by forcing players to keep their speed in check in order to get better handling for their jetski, as going full throttle results in wide turns that miss targets completely and often crash you into objects. The CPU, however, seems to have little difficulty in dealing with this handicap and, instead, can rocket forward, full speed, and take turns with a razor’s edge that would make a dolphin stare in disbelief. WIth no difficulty meter to adjust, a player will, inevitably, fail the first few times they race, coming in dead last or at least close therein. Even with liberal turbo usage (and there are plenty of recharges peppered throughout the level), speed and control are just not good friends in this game.

If you can grit your teeth and make it through the first few runs, you will start to develop a cache of cash that allows for upgrades and better jetski purchases, and this is where the “Utopia” motif comes into play. Players who are able to tough it out are rewarded with better and better jetskis that, honestly, handle like they’re out of a totally different game. I even went back and replayed earlier circuits and courses because I wanted to do infinitely better, and I did. Between getting a handle of the game, upgrading my rig and generally understanding the concept better, Aqua Moto Racing: Utopia became a pleasant and even fun experience. 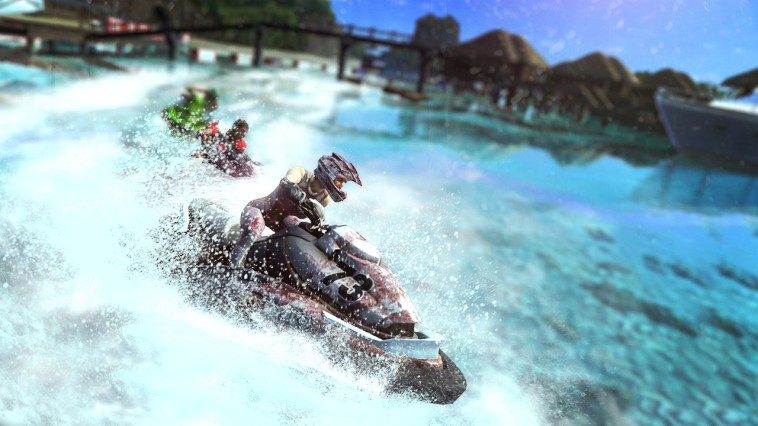 Additionally, this game is a lot of eye candy for those who enjoy water effects. The team has done a great job in crafting a world that is significantly dedicated to making players feel like they’re in the middle of a beautiful seascape that’s been set up for racing and stunting. Far from the Riptide GP: Renegade effect that was almost gritty (which doesn’t pair well with water), this felt like it could have been taking place somewhere in the Carribean, where life is better and the water is clearer and maybe laws about ripping around on jetskis are generally more relaxed. I wish the dedication to the water could have been shared with character creation and some of the jetski modifications, because that desperately needed a facelift.

In the end, Aqua Moto Racing: Utopia is a game that only really delivers after you invest a sizable amount of time into getting into it and wanting to play it. It’s like learning to play an instrument and being told that, once you’re good, you’ll really sound and feel better about what you’re doing. But that makes sense when you put time into a skill, less so when we apply that same reasoning to a game. For enthusiasts of alternative racers or jet skiing in general, there’s probably a strong appeal that will keep you engaged and ultimately provide the experience that you deserve. However, for casual Switch fans just looking for a new way to play, you might as well coast on by, because this simply isn’t the port for you to dock.