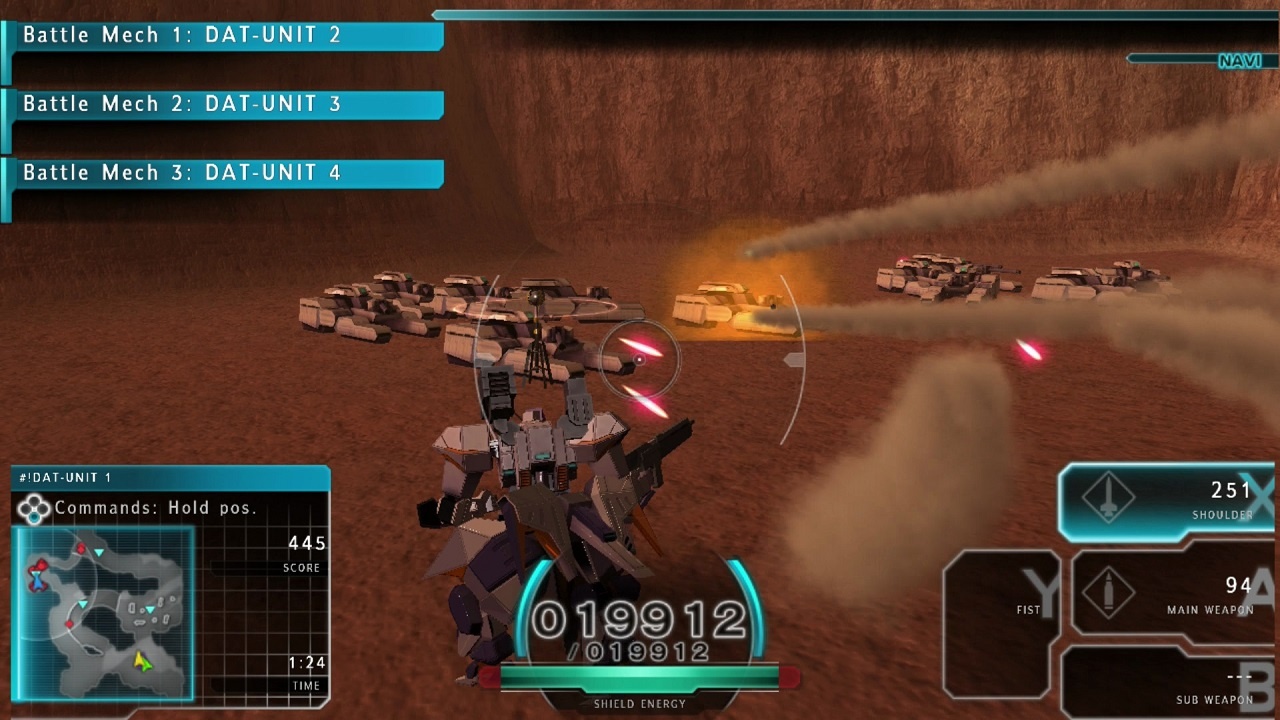 It can’t be denied that the whole genre of mech-related games are more popular in the Eastern Hemisphere than they are in the West. Although there still remains a niche fan-base for this style of game, it’s rarely catered for, often producing titles that are lacklustre in their presentational styles and gameplay abilities. The latest of such titles to blast their way onto the Nintendo Switch comes in the form of Honey Parade Games and Marvelous Inc’s Assault Gunners HD Edition, a 3D action-blaster that boasts thirty-five battle-heavy missions, a horde mode and over one-hundred different variations of customisation.

The story revolves around a peace keeping force, known as the DAT, who is tasked with combating a mysterious threat to the Earth colonists who have made their homes on the planet Mars. Armed with an army of mechs, this terrorist organisation, known only as ANTS, have begun an uprising; hell-bent on the colonists’ destruction and to bringing an end to the human utopia upon the red planet. As a combat ready organisation, you take the fight, alongside three other battle mechs, in order to ascertain who is leading the assault, as well as bring an end to the destruction on the planet of war.

After a couple of training missions to acquaint yourself with the weapon and navigation systems of your mech, you are sent to the surface of Mars to end the threat of the automated enemy. With direct control of a single mech, you and three other squad members, whom you can give a basic set of orders to via the directional pad, traverse a variety of levels, as you rid the area of enemy activities, as well as perform a series of tasks, such as activating beacons or radar dishes. You control your mech with the left thumb-stick, whilst the shoulder buttons fire weapons and give a limited boost. Weapon selection is mapped to the face buttons and an on-screen map shows you the locations of enemies and objectives. 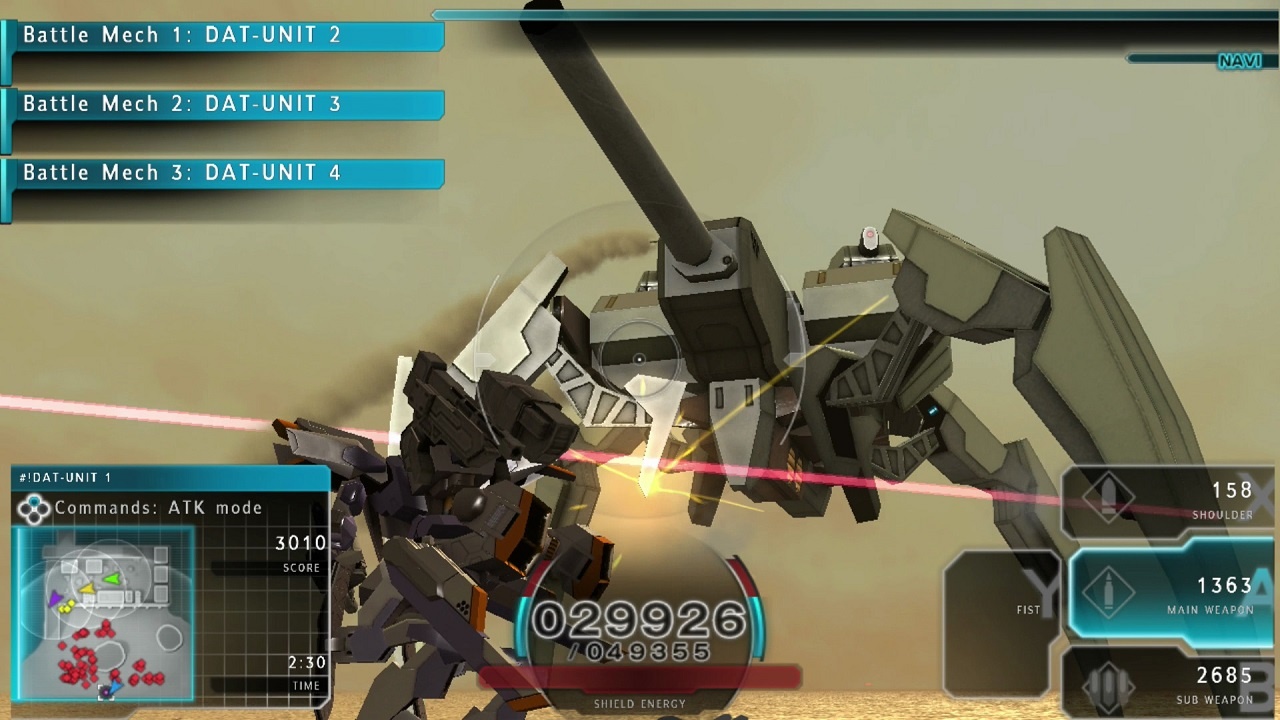 Fallen enemy mechs, as well as a series of crates, drop various forms of collectibles, such as ammo types and shield regenerations to help maintain the status quo; with successful missions accruing points which are used to level up your mech, unlocking various attachments, weapon upgrades and new mech models. It’s a simple premise to the mechanics of the gameplay, perhaps even a little too simplistic, as the majority of your time is spent running, or boosting, around the terrain with your finger firmly planted on the R button, as you take out a series of enemy bots.

Each of the missions can take around five to ten minutes to work through, making it an ideal game in a casual format. It offers short bursts of mindless fun, although a lack of variety, both in gameplay mechanics and aesthetical presentation, soon make this a game that becomes stale and repetitive. Although you can equip your mech with a diverse range of bolt-ons and weapon types, the game rarely challenges you, or encourages you even, to experiment with different loadouts or weapons. It’s a simple blasting affair with no tactical scope and you’ll more-often-than-not, just find yourself blasting the generic enemy types with your main gun.

As well as offering a campaign mode, Assault Gunners also comes with a horde mode, entitled Inferno Mode. Covering five different maps, you are tasked with eliminating a series of waves of enemy combatants. Although touted as an extra game mode, the style of play remains the same, with the same generic enemy types and level designs. This is one of the overriding problems that Assault Gunners contains. Although it’s good, mindless fun, a severe lack of variety in any of its mechanics produces a game that is as flat as the landscapes upon which it is presented. 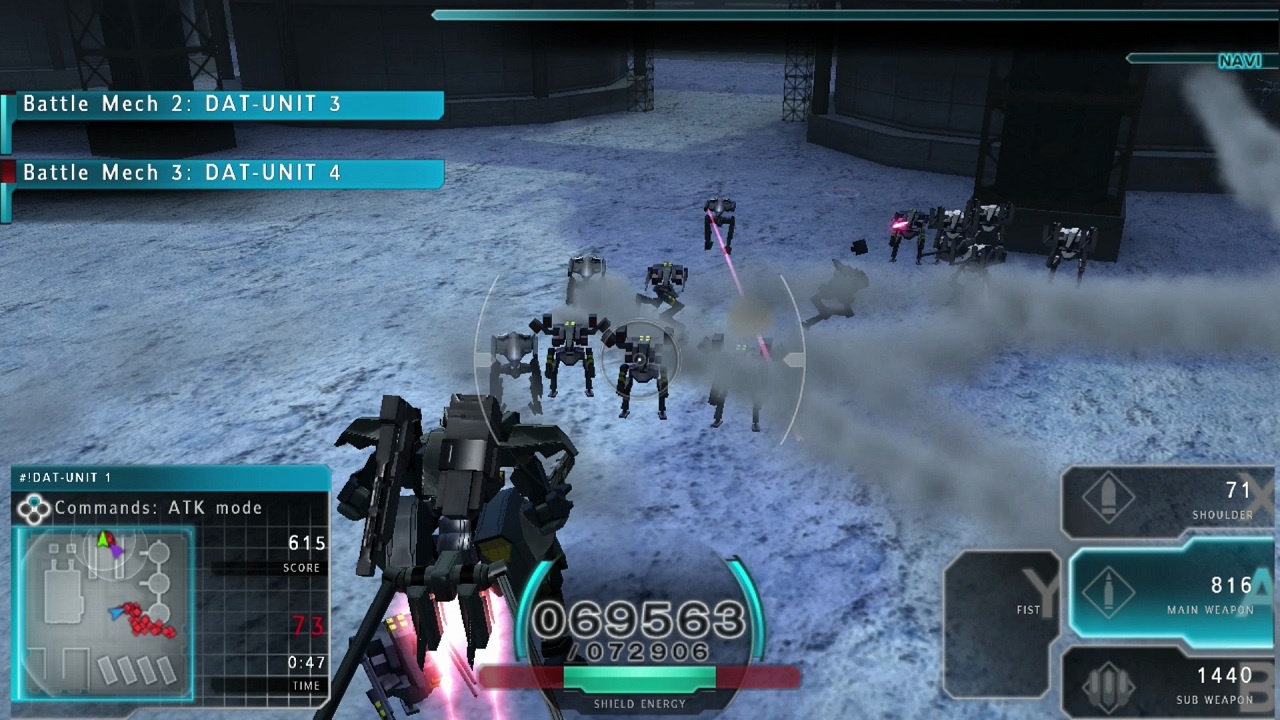 Graphically, the game contains a very last-gen feel to it; any onlookers can be easily forgiven for thinking that you are playing the game on a Playstation 2. It’s very texturely bland; albeit for a bit of colour and variation on your main mech design. Voice-overs are completely Japanese too, which isn’t always a bad thing in the majority of Eastern games, but here, your fellow mech pilots yell at you in an incomprehensible manner that bears no subtitling whatsoever. It leaves you with an unsatisfying feeling amongst an underwhelming landscape; thus impacting on the initial fun of the title.

The game was originally released on the PS Vita and it shows. Although it’s passable on the Switch’s portable mode, it’s blown-up presentation on the docked, TV mode doesn’t fare so well. The sparsity of its level design and jagged edges are glaringly obvious when played on a larger screen, as is the monotony of the enemies generic designs. The smaller details also become more exaggerated here, with a lack of enemy explosions, variation in level design and a control scheme that seems to jar; especially when playing with the pro controller.

Overall, Assault Gunners HD Edition is best described as a wasted opportunity. It is mindless fun that can satisfy in short bursts. However, too many flaws in its presentation, soon promotes the game to a level that grinds, or becomes to boring too soon. Despite containing a large number of customisation options, they ultimately count for nothing; often producing a series of upgrades that bare no beneficial improvements at all. As a casual game, in a portable environment, it provides a satisfactory mech blaster, especially if you are one of the niche members of its genre’s fan-base. However, if mechs aren’t your thing, or if you play the Switch primarily in its docked mode, then this is a shooter that is probably best avoided. Saying that though, I’ve played a couple of mech games on the Switch and, whilst not the best, it’s certainly not the worst either.