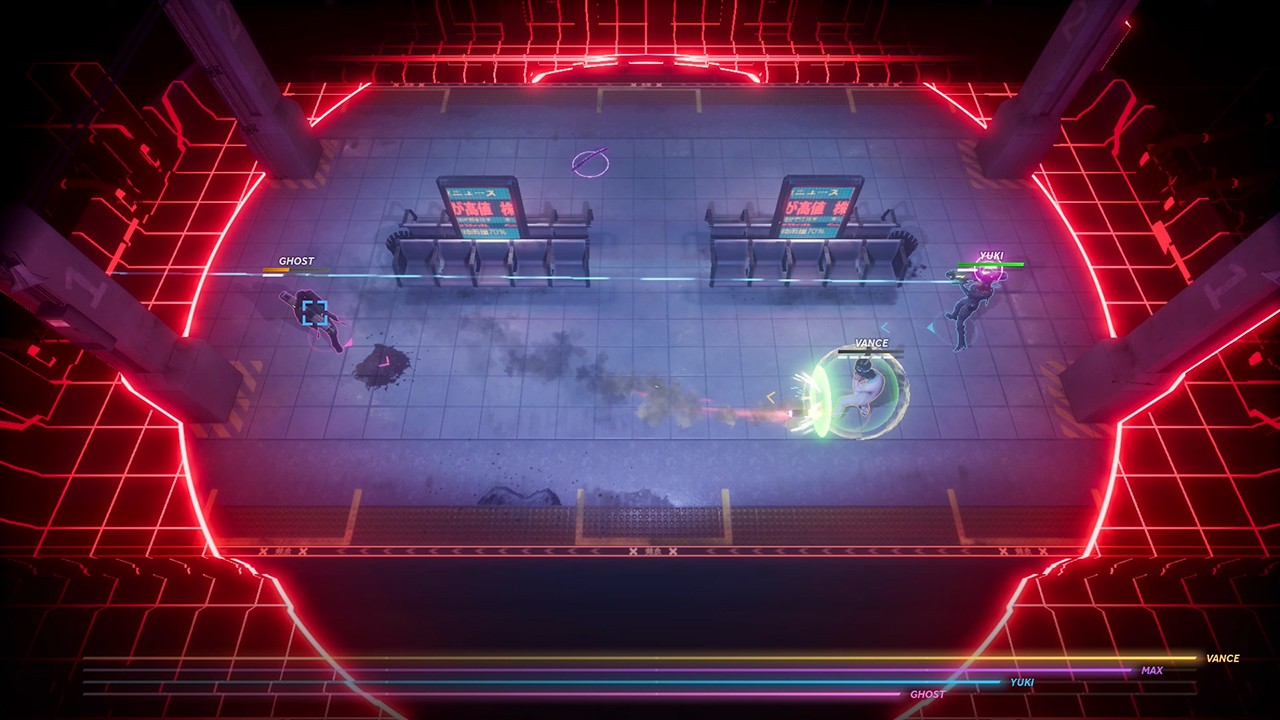 One of the main selling points of the Nintendo Switch, was its ability to play games with friends and family, whenever and wherever. Within this context, it’s managed to achieve a successful formula with a number of first party titles. However, despite one or two successes, the indie market has largely failed to produce a killer title that takes full advantage of this. There’s been a number of reasons for this, such as an indistinguishable presentation or a level of gameplay that simply doesn’t satisfy or justify. That is until now though, as Bit Dragon’s Hyper Jam beats a release upon Nintendo’s hybrid machine.

This arena-style brawler pits four players against each other in an 80s inspired production of neon-soaked landscapes, ranged and melee weaponry and a unique perk system that ensures everyone plays on a level playing field in a series of balanced bouts. Played over a series of rounds, each player accrues scores based on performance, such as hits, kills, deflections and being the last man standing. After each bout, the scores are added together to produce a table; each position denoting the order with which players pick a perk to take into the next round. As points accrue, a bar fills across each performance screen and once your bar, or another player’s bar, reaches the end of the screen, they or you, must win the next match to be crowned the overall winner.

It’s a simple and effective premise, with each bout lasting only a couple of minutes, skill dependent of course, although if the match goes on for too long, a Fortnite-style storm circle encloses the playing area to produce a constantly shrinking arena. It allows for some quick-fire play, as well as game that’s well suited in a casual play scheme. Progression also brings a number of unlocks, from character costumes to taunts, providing an incentive and end-game goal for prolonged play. It’s all presented in an easy-to-follow play style and well balanced level of combat to create a fast and fluid feel to the overall gameplay and one that leaves you immensely satisfied in winning within a multiplayer combat scenario. 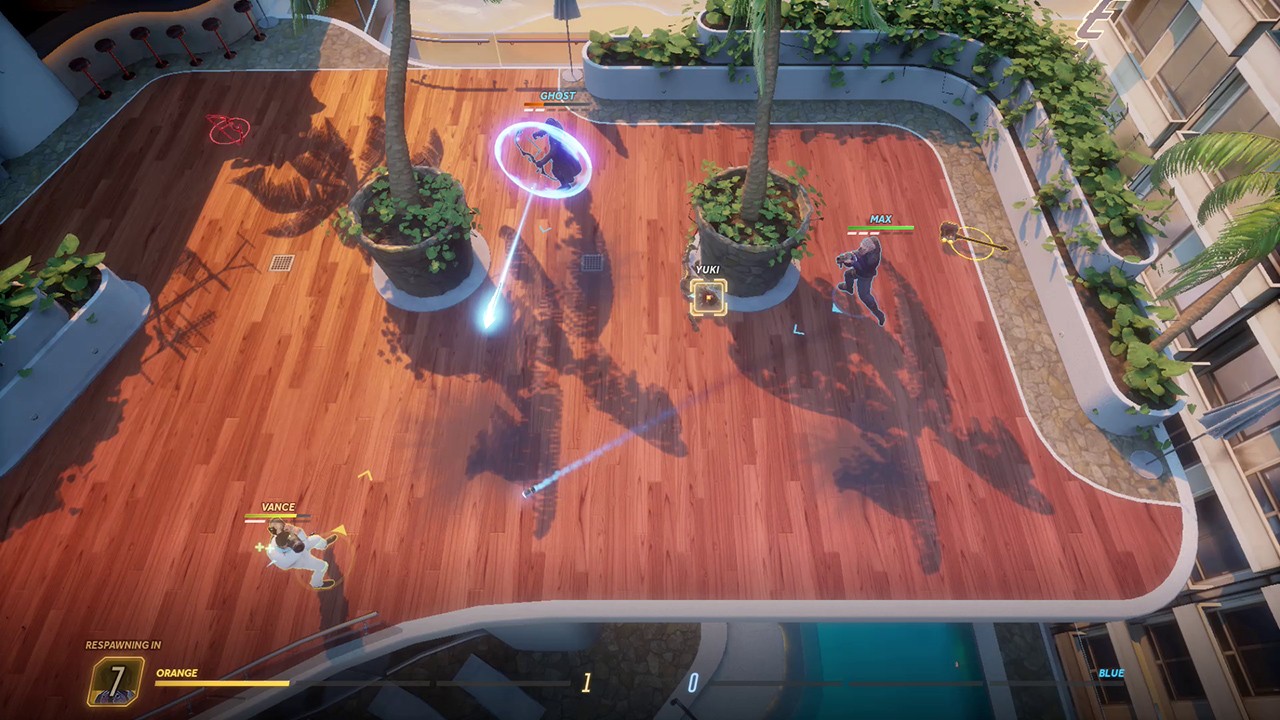 When it comes to the overall level of gameplay, the game really shines in everything that it does. Levels are nicely detailed with some sharp and precise graphical presentations. Characters are easily distinguishable and keeping track of everyone within the arena is never an eye-squinting experience; even on the Switch’s smaller screen during hand-held play. However, it’s real jewel lies in the elements that comprise the overall package. After picking your characters, from a roster of four, you are then placed within a level of your choice, or a random selection, where you all fight to remain the last man, or woman, standing. This isn’t just a simple brawler though, as a number of components come into being that produces a cat-and-mouse style of play, as well as a fine-balancing in order to combat whatever weapon your opponent may posses.

Of course, you can utilise attack moves, either bare-fisted, or with melee weapons such as katanas or hammers, as well as long-ranged grenade launchers, guided missiles or laser guns. However, you can utilise a number of moves or styles in which to combat specific weapons. For instance, each character can perform a dash move that can either create a fast retreat or dodging move, or a more offensive rush in order to close the gap between you and your foes. As well as this, you can also deflect shots or blows, although this largely dependent on the weapon you are defending against as, obviously, deflecting missiles is a hopeless cause, but shielding yourself against close-ranged melee attacks can be an effective way of ensuring your survival.

Positioning too, is crucial. Find yourself on the wrong end of a long-range attack weapon? Then close the gap and retaliate with a flurry of close-ranged melee attacks. Finding you foe too close for comfort? Then dash to retreat to a safer distance. However, watch the gap, as each level also contains boundaries that can be hazardous to your health should you fall off a platform or cliff edge. When it’s all put together, it produces a tense and action-packed series of bouts that can go either way; being a tightly fought contest or a runaway winner, again, dependent on skill and weapon choices. With each combatant starting every bout empty handed, weapons randomly generate within each level at certain points, creating a mad dash amongst everyone in order to arm themselves, making for hilarious and tense moments as everyone goes for it within the arena of all out combat. 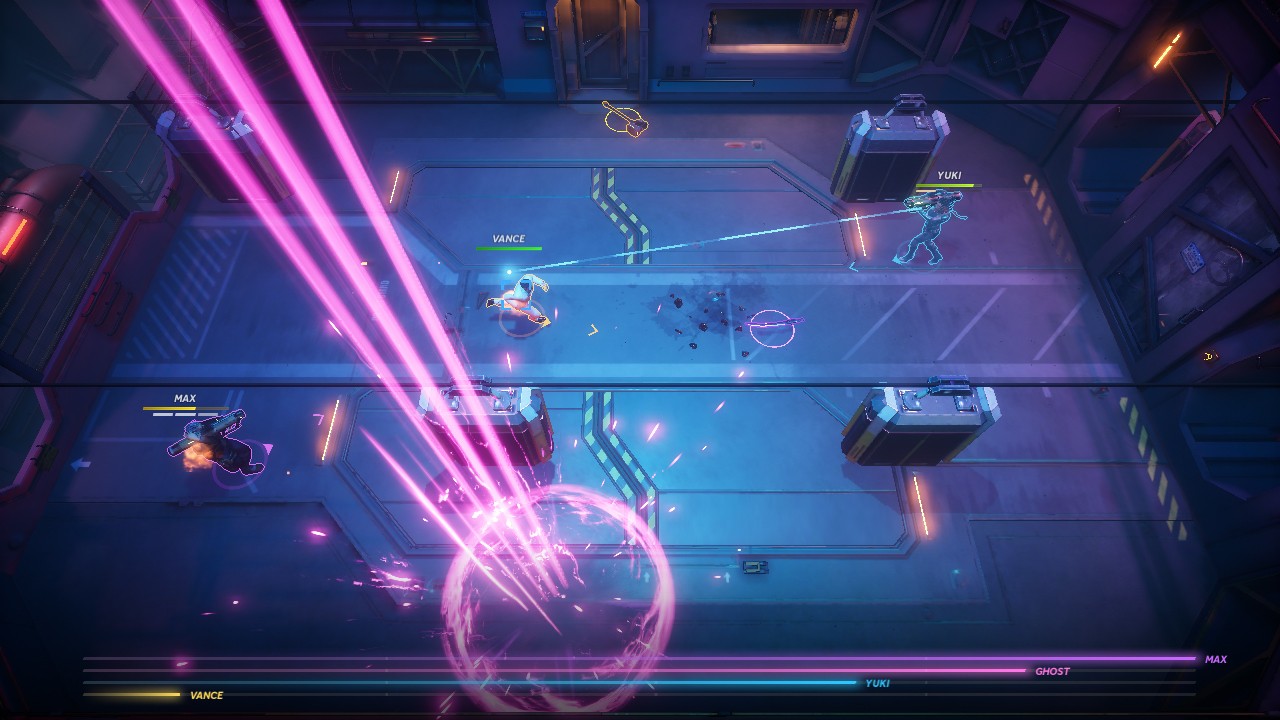 One of the most interesting and fun aspects of the gameplay, revolves around the clever and quite unique mechanic of perk distribution. Between each round, a series of perks are presented based around the number of players within each match. According to the scores and table positioning, the player in last place gets first choice of what perk they wish attach to their characters, with the first-placed player getting last choice. These perks remain with you throughout the entirety of the game, as well as stacking to strengthen their particular ability. These can range from movement speed, health regenerations, freezing, fire or confusion abilities and attack strengths, as well as a host of other fun and interesting additions. It’s here, where the game produces a fine balancing act in ensuring that no, one player, becomes dominant within the field of gameplay.

Despite being a multiplayer brawler, the game also caters for solo player with the ability to play with some impressive AI opponents. Played across a number of difficulty levels, with easy being a bit too simple to the challenging harder levels, the AI does a good job of representing other player. As well as this, you can also play locally with friends and family, with each player using one joy-con each. To ensure long-term playability though, you can also take the game online against randoms to produce some fast, frantic and compelling levels of play. As well as this, you can also choose to play across five game modes from free-for-all levels to more team-orientated games. Although solo play just about holds enough to keep things interesting, it’s in its multiplayer aspect that the game truly shines; especially in local. Online was just as fun, but a sparse player level sometimes produced lobbies that weren’t always full at the start of the game, although latecomers can join at any time throughout the bouts. However, with the promise of full cross-play, extra levels and game modes coming in future updates, this shouldn’t be too much of an issue in future.

Overall, Hyper Jam is a satisfying and enjoyable multiplayer brawler for the Switch. It absolutely shines with style, although a limitation in substance, such as no story or character investments, can bring a lacklustre or bare-bones feel to the overall game. However, when it comes to pure, unadulterated fun and compelling combat, there aren’t many other games out there that can match its pace and levels of party-inducing banter. Everything is sharp, from presentation to gameplay and its finely-balanced level of combat ensures everyone involved has a fair crack of the whip. With a soundtrack to match too, the game just looks and sounds as good as it plays and with some game-building updates coming soon, this is an action-packed multiplayer game that is sure to stay on my Switch for a long time to come.

Hyper Jam is a solid, action-packed arena brawler that caters for up to 4-players, both locally and online.