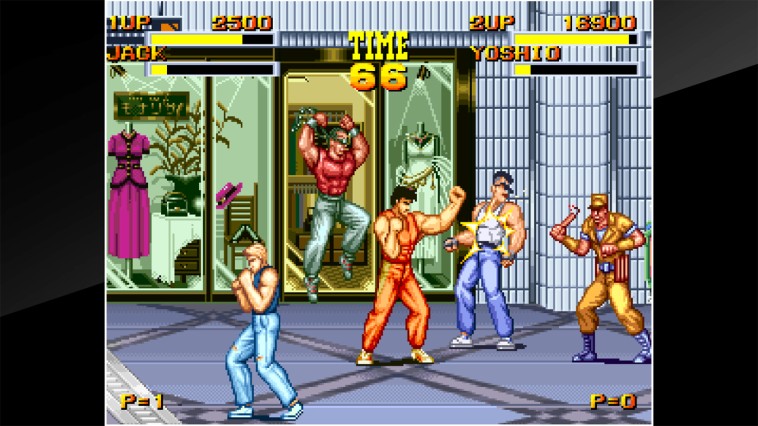 In a world of games that are intent on making you feel, think or otherwise analyze something about your life and your moral barometer, it’s so nice to have a game that’s just DUMB. I don’t mean that it’s poorly designed, unintelligent or trying to play with “stupid” characters, I just mean a game that allows you to essentially turn off your brain. It’s one of the reasons that the Serious Sam franchise got a huge boost a few years ago, and it’s one of the reasons that we all enjoy clickers: maximum payout with minimal investment. But, to truly get an unironic, aggressively simple game, you gotta go back in time, and that’s where the NEO GEO titles on the Switch shine. Welcome to Burning Fight.

If you’ve never heard of Burning Fight, it’s pretty easy to forgive such an oversight. After all, being released in 1991 on a console that rivaled the price of a car, Burning Fight is a side-scrolling brawler that existed when some of the top contenders of the category were already reigning supreme (1991 was the birth year of Streets of Rage). There aren’t any characters that are particularly memorable, and there isn’t a story: you’re one of three dudes who fights gangsters. Each character has the same ending, and there’s no special reason to pick one over the other, other than the traditional three rule (slow, medium and fast with strong, medium and weak). For so many reasons, this game was well received by critics (the people whose job it was to play it) and rejected by fight fans who hoped to get Double Dragon on their NEO GEO and ended up with…this. 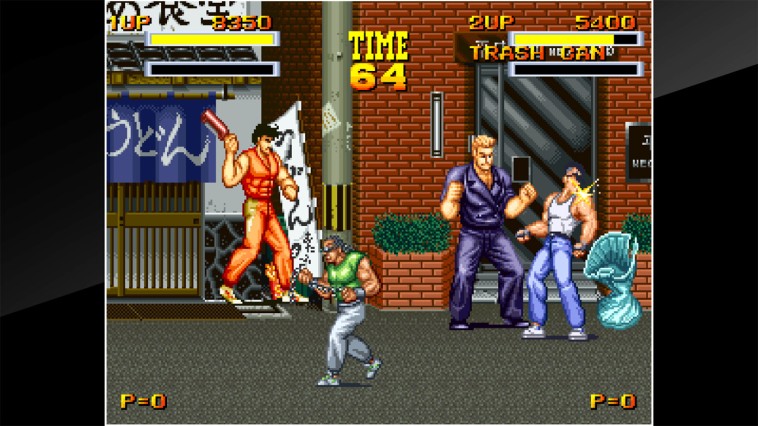 But Burning Fight has a ton of charm and enjoyment to it, and I think it’s a shame it’s been mostly overlooked for decades. First and foremost, the setting of the game is a lot better than anyone seems to mention. Streets of Rage takes place in fake Los Angeles, Final Fight takes place in fake New York, but, other than a couple of small details, there’s nothing that really defines these areas. Burning Fight is unabashedly in Osaka, and playing the game is like taking a hilariously violent walking tour of what it looked like in the 90s (and, somewhat, still today). You start right in the middle of the famous Dohtonbori district, complete with iconic characters around and vending machines to break. In a period where a lot of Japan games that came to the West tended to be focused on ancient or stereotypical “ninja” Japan, Burning Fight is almost like a love letter to where a ton of the actual crime and brutality of the late 80s was actually happening. I mean, it’s funny and interesting now, but I bet it pissed off a lot of people at the time.

Burning Fight, much like most other brawlers, also have weapons that you can pick up from different enemies, but there’s something distinctly different about how these are handled. For instance, one of the first enemies you encounter is a dude who is literally wearing a belt of dynamite sticks that he just takes off and throws at you. It deals damage indiscriminately, so he can really be a pain in the ass to his fellow jerks. But, if you’re fast, you can pick it up and throw it back. And then he can throw it back. Everytime you pick it up, the fuse resets, so dynamite is infinite.

Tired of throwing dynamite? No problem! There’s plenty of other things, like long poles, bottles, knives…and a gun. When I ran into some stereotypical gangster who drew a gun on me, I could never have thought he would drop it and I could then pick it up and shoot people. You know the scene in Raiders of the Lost Ark where Indy just shoots the dude with the sword? It feels just like that for the next few seconds of the game, and it’s hilarious. I loved someone trying to jump over me while swinging around a chain like The Warriors and I just straight up shot him. 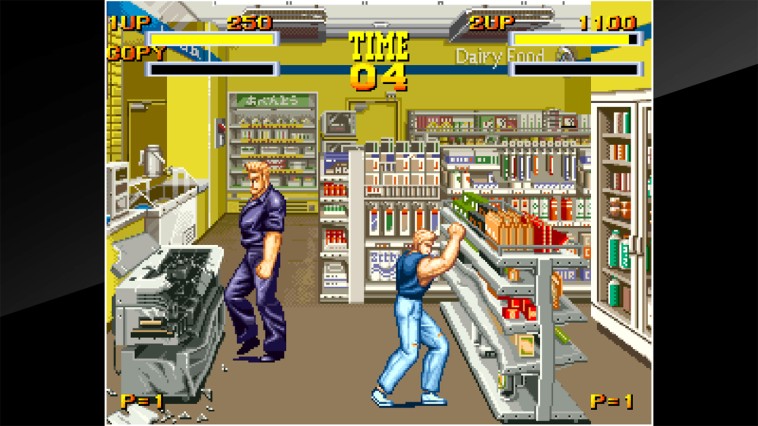 And this game actually looks awesome for 1991. Burning Fight, for whatever else it could be lacking, was pulling the full power of the NEO GEO to draw some pretty great character models and street layouts that I think could have held up right to the edge of the 16 bit era (think just below PS1). The focus on making the game so clearly set in Osaka wouldn’t have worked if everything was clunky and pixelated, but there’s crystal clear detail on everything, from the fake “Izutsu” logo on the front of the trucks to a train platform labeled Umida (Umeda is one of the biggest stations in Osaka). Even the underground areas that you fight in are a dead ringer for how those areas look today, and I can safely say that because I was just there a little while ago. Without any crazy special moves or fireballs or whatever to focus on, the game could make sure that they had mini bosses that looked way too much like 90s era pro wrestlers and that the clown I punched looked just like the Kuidaore Ningyo, which is a patron mascot for visiting sumo wrestlers. It’s like if I make a fighting game in Pennsylvania and one of the first things you could destroy was a giant groundhog.

I have to admit, if you take away the amusement factor of admiring the locale, it’s easy to see why Burning Fight was so lukewarm. There’s no memorable music, the translation is patchy without being laughably bad, and some of the bosses are overpowered. Thanks to being able to pump “credits” into the game at will, there’s no losing, but there’s no winning either, since it’s just a matter of time rather than skill. But I have been to these locations, and I am tickled by recognizing them and also destroying them. If you’ve done a tour of Japan and spent any time in Kansai, Burning Fight is worth taking a look at as a fluid if simple beat-em-up. If you’re entirely Western and not up to jaunting to Japan, save your pennies.