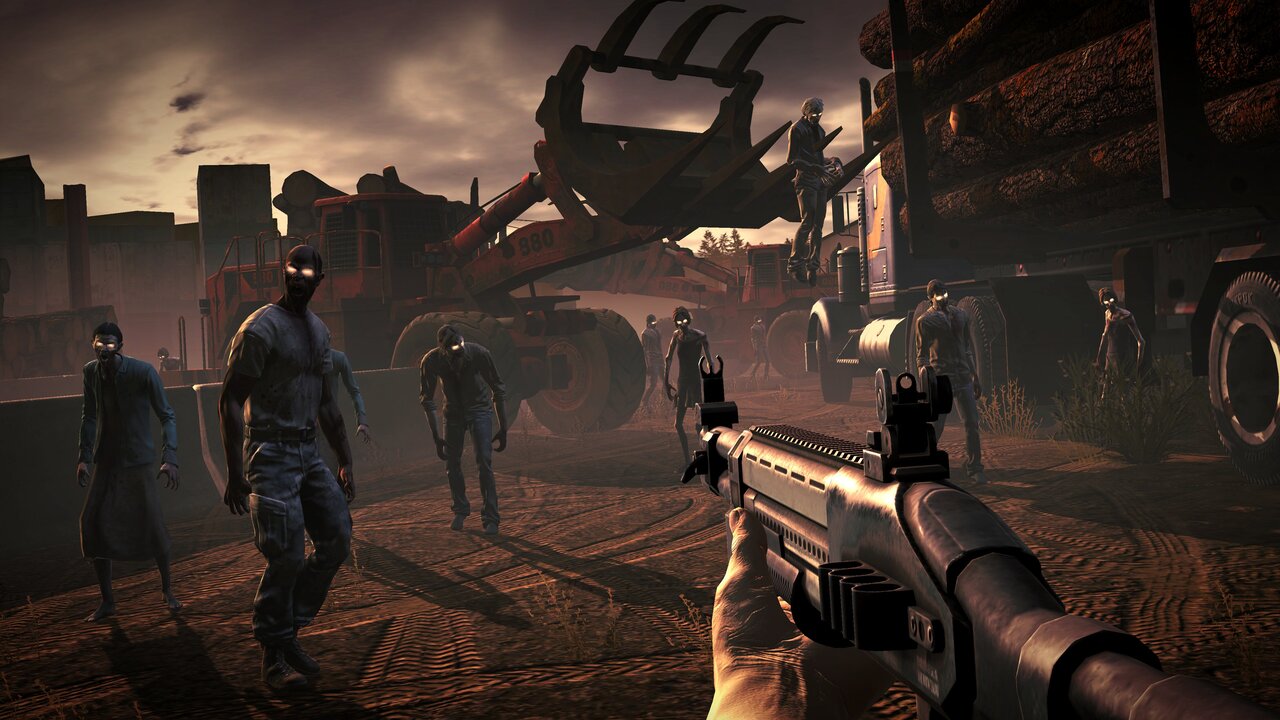 When it comes to shooters, there are usually two types of player. First, there’s the runner and gunner, then following that, there’s the campers. Also, when it comes to the enemy that is your cannon fodder, two of the most prolific types come in the form of combat troops or zombies; heck, you can even get zombie soldiers! So, if you’re a fan of camping and battling against combat troops, then you’d better loosen your guylines as the following game may make you flutter in the wind. However, if you love running and gunning, whilst disposing of the zombie hordes, then read on as Versus Evil may just have the game for you, as Into the Dead 2 runs and guns a release onto the Nintendo Switch.

As you may have guessed by now, Into the Dead 2 is a run and gun shooter that sees you battling against a huge zombie horde. What makes this game different though, is that it’s an automatic runner, leaving you free to move left or right to line up your shots, find ammunition or weapons and simply make it from point A to point B without dying first. It doesn’t sound like much and in essence, it isn’t really, but what the game does contain is an abundance of fun, gameplay and content to keep you slaying the undead for a long time to come. Originally released on mobile platforms, this game was a free-to-play title with a host of micro-transactions tied to it, but on the Switch, these extra monetary mechanics have been removed to produce a more console-style of game; one that sits very nicely upon the portability of the Nintendo Switch, although its F2P pricing has now been given a value.

You play the game as a character named Henry, who, after crashing his truck on the highway, needs to make his way safely back to his family within the midst of a massive zombie infestation. Armed, at the beginning, with only a pistol, you need to run a set distance through the undead crowds, disposing of enemies, re-arming through the discovery of ammunition crates and utilising a host of weaponry that can be found at set points within some of the levels. Oh and yes, stay alive. It’s a simple premise, but the constantly increasing distance from A to B, severe shortage of ammunition and ever-growing hordes of zombies makes this more of a challenge than you may originally think. 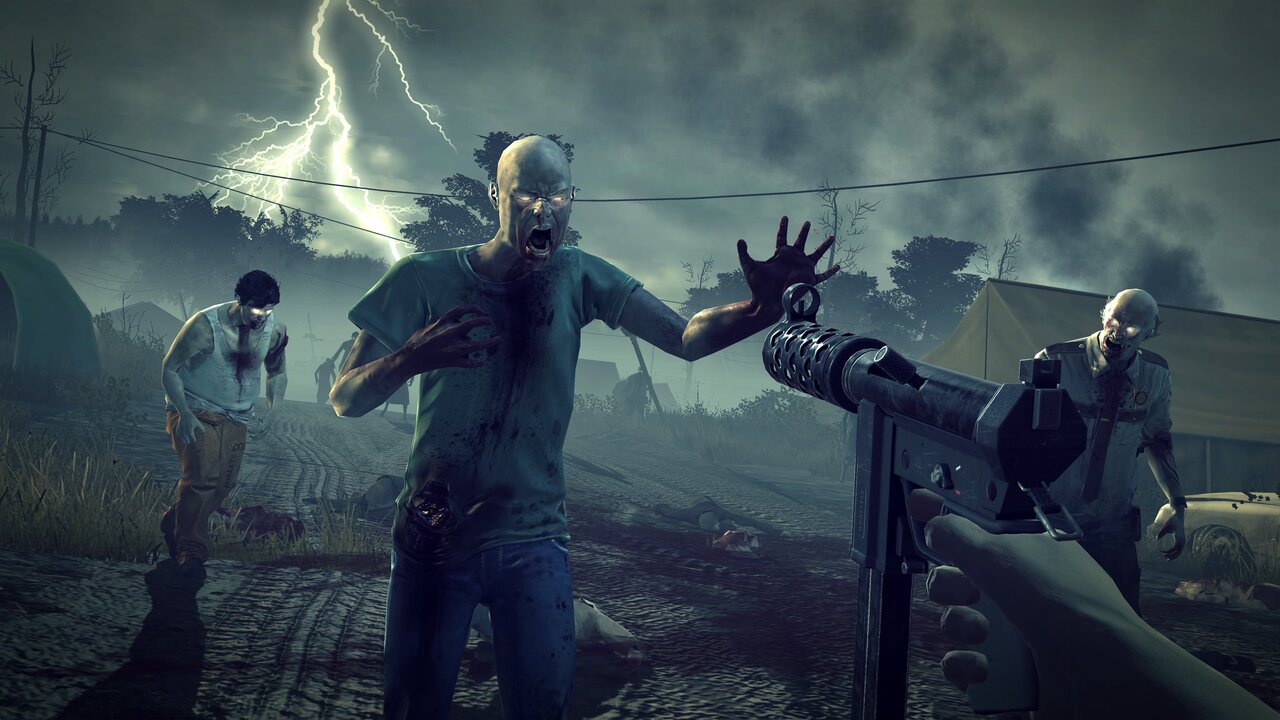 The game contains over sixty story levels that are spread across seven chapters. Each of the levels also come with a number of objectives, from surviving to achieving a set number of kills and weapon specifics to certain styles of kills. Each of these challenges unlocks stars, which need to be collected in order to unlock new episodes and weapons. However, there are also a spattering of bloods worth of extras, from over twenty-five weapons across eight classes, eight companions to help you out from dogs to lions, thirty-six side missions, an extensive arcade mode and two DLC extensions; although it’s important to note that the DLC only comes bundled with the physical edition of the game and the digital bundle pack, the standalone digital version of the game needs the DLC to be purchased separately.

The basic premise of the gameplay involves successfully reaching the end of each level. Your character runs automatically, as you control the movements of veering left and right with the left joy-pad, whilst firing shots, with the ZR button, when zombies are lined up within your sights. You can carry grenades, should you own any, and throw them with the ZL button, whilst jumping over fences and re-arming is also performed automatically. It’s an instantly accessible control scheme and game to get into, but progression does bring more crowded levels that offer more of a challenge. In order to combat this, you can unlock a variety of different weapons, from pistols to shotguns and automatic rifles and rocket launchers. In order to maintain healthy stocks of ammunition, you can veer towards the green flares that signal an ammunition crate; running over these grants you a randomised amount of ammo. You can also carry a primary and secondary weapon, as well as rely on your trusty one-use knife should you find yourself in a close-up pickle.

Hidden amongst some levels, different variations of weapons can be found; the majority of which also contain some bonus objectives assigned to them. These can range from electric strimmers to gun-mounted turrets and the new sawblade launcher which slices and dices the opposition to shreds. Progression through the game also brings companions that can run with you. These can range from dogs to even a lion and the new inclusion in this version of the game, the bear. These essentially help to dispose of any zombies that lie in your path; although be wary, as they don’t always attack everything within range. To add a touch of depth to the proceedings though, all weapons and companions can be levelled up, contain special abilities and be modified to make them more powerful. 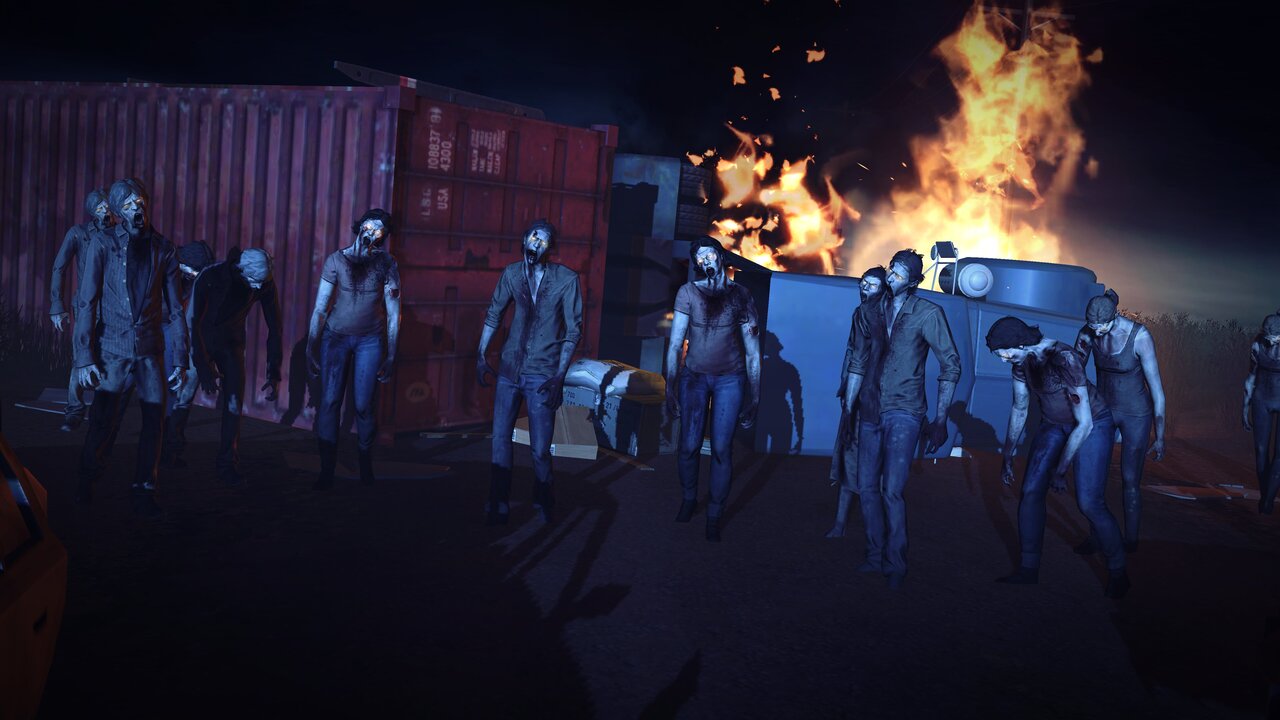 There are a number of different elements that need to be taken into consideration as you play. Some of the objectives can’t always be completed on your first run; requiring certain upgrades to be found or abilities to be functional to stand a chance of retrieving their stars. These can be found through progression, often by purchasing them with gold that is rewarded throughout the game, upgrading weaponry or storing loot that is rewarded with each successful completion of a level. These can come in three varieties, housed within a bag at the end of a successful run in a random level of distribution. However, you can only take one item from the choice of three and these can contain gold reserves, extra ammo, grenades or larger refills from ammunition dumps.

In terms of gameplay, its simplistic formula produces an instantly accessible game that constantly dangles a carrot in front of your nose to keep you playing, From each of the level challenges to constant upgrades and new weaponry, there’s plenty here to work towards. This is further bolstered by the side stories and arcade modes which contain the same level of fun and addictiveness as the main story campaign. Graphically, there’s a high amount of detail within each level, especially on some of the gun models and it runs super smoothly. In fact, the game plays so well, that it contains that addictive quality of a one-more-go mentality; especially with its quick-fire levels that make it a superb casual game that can be played at any time.

Overall, Into the Dead 2 is a simplistic game, yet one that contains enough of a challenge and a host of content to keep you playing over the long term. It’s mobile roots are still apparent throughout, but the omission of micro-transactions produces a much smoother experience; one that pushes you on with its rewarding looting and upgrading systems. It looks good and plays great, with some nice elements and mechanics, as well as a host of extra features to keep things interesting. However, it can be a bit repetitive at times as you constantly replay missions over and over in order to unlock all of the stars contained within, but to be honest with you, it may be a bit of a grind at times, but I’ve never had so much fun grinding as I have had with this game. It’s also quite gory too, making this more of an adult-orientated title. So, if you love running and gunning, mowing down the zombie hordes and are looking for a fun and accessible game, then this is most definitely a game that should send a shiver down your spine. Just don’t set up camp, as you won’t last long against this crowd of zombie hordes.

Into the Dead 2 Review

Into the Dead 2 runs and guns its way into a host of content, loot and satisfying gameplay. Oh, and zombies too!