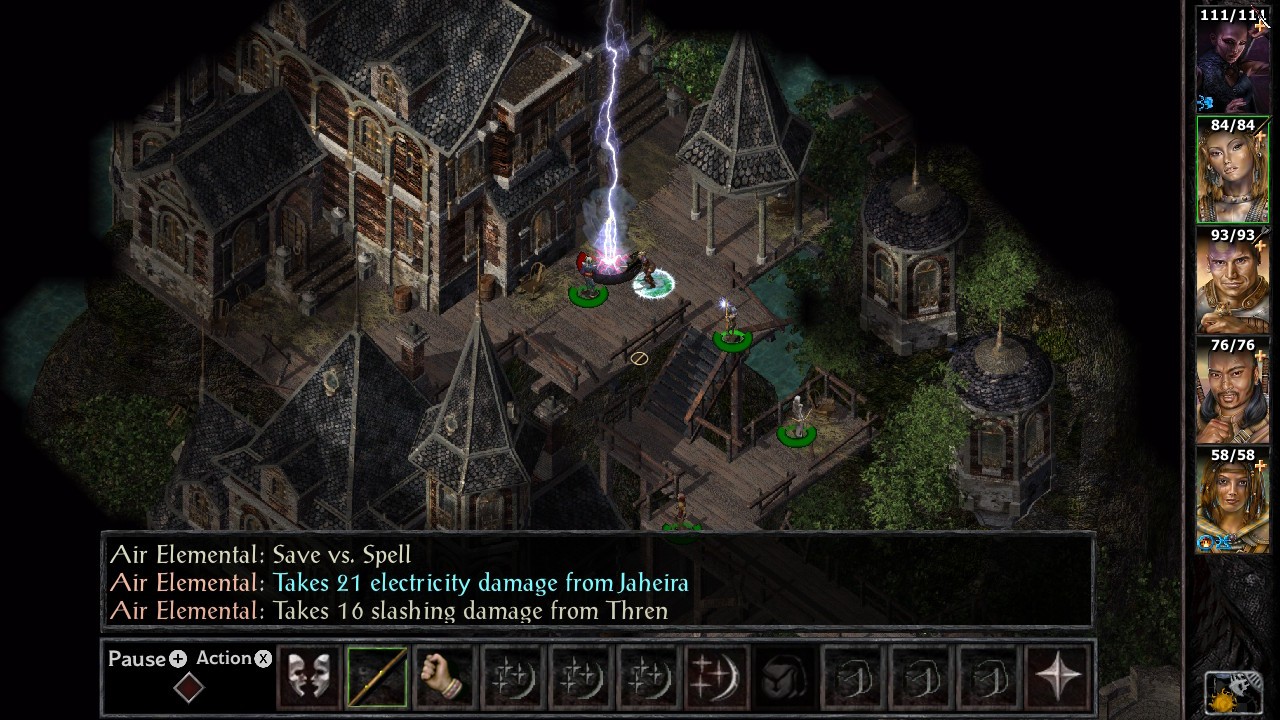 The Nintendo Switch has become the everything system. It’s a fantastic pick-up-and-play device for people who want short bursts of gaming. It’s a longterm, heavy investment machine for folks looking to dump hours into RPGs and completionists nightmares. It’s got the sports, the shootings, the fighters, the jumpscares, everything you could sincerely want (with a couple of small exceptions). But it’s been missing something important, something essential to some of our foundational aspects of gaming, and it’s been finally corrected. Beamdog had their eyes on the prize in bringing over some of the biggest, best and most investable games of all time to the Switch (with the blessing of the original creator, BioWare), and now, we loyal Advanced Dungeons and Dragons enthusiasts, can finally watch our days, weeks and even months slip away in the worlds of rolling for initiative, calculating THAC0 and trying to fudge character builds by rerolling just one more time. The world of Baldur’s Gate has arrived, and it comes in a jaw-droppingly complete package with Baldur’s Gate I & II: Enhanced Edition.

Trying to pin down and expand on the plot of Baldur’s Gate is an incredibly complex ordeal, one that would take pages upon pages to accomplish, especially in this particular package. Taking place in the Forgotten Realms section of Dungeons and Dragons lore, Baldur’s Gate is one of the most quintessential backdrops for tabletop-turned-computer gaming input, and the double edition on the Nintendo Switch only further proves this with a massive amount of DLC (which, here, are further campaigns). Anyone who has ever rolled up a character sheet knows that the background of the game is only as important as what the DM chooses to do and how the players want to drive the story forward. Now, there is a general background for the beginning of this whole saga: you are the ward of a great and powerful mage, Gorion, who is abruptly told they are leaving their home of Candlekeep one dark and foreboding night. Before they can flee, Gorion and the Ward (that’s you!) are ambushed, Gorion dies, you’re joined by a childhood friend into stealing away into the night and then things get wild. It’s your classic story of “orphan with unknown past has terrible or heroic future”, but it’s told in such a way that it’s enthralling, and that’s important because Baldur’s Gate is going to consume the rest of your year.

Before diving into the meat and potatoes of the games, it’s important to know what you’re getting here. First and foremost, these are the Enhanced Editions, so it’s a reconstruction of the games from the ground up on their Enhanced Infinity Engine (a revamp of the original Infinity Engine). The graphics are sharper, cleaner and better looking than ever, but they still have a dark quality to them that comes from being in the Forgotten Realms. This is the whole kit and kaboodle, so Baldur’s Gate has all the campaigns (Sword Coast, Black Pits and the infamous Dragonspear), and Baldur’s Gate II has the original campaign plus the Throne of Bhaal and a second visit to the Black Pits called the Gladiators of Thay. Any one of the campaigns can be dived into without preamble, but I would highly, highly recommend starting from the original Baldur’s Gate and going in chronology through the releases to attain the maximum experience. You see, the characters that you roll up in the first game can be carried, with levels and all, throughout the other campaigns, creating a true, roleplaying cohesion throughout. The Siege of Dragonspear campaign, which garnered a LOT of controversy years ago, is the neutered version with the transwoman plot point being introduced post game, so that might be a turnoff for some, but whatever. It’s available, and you can play it or not, it’s your call. 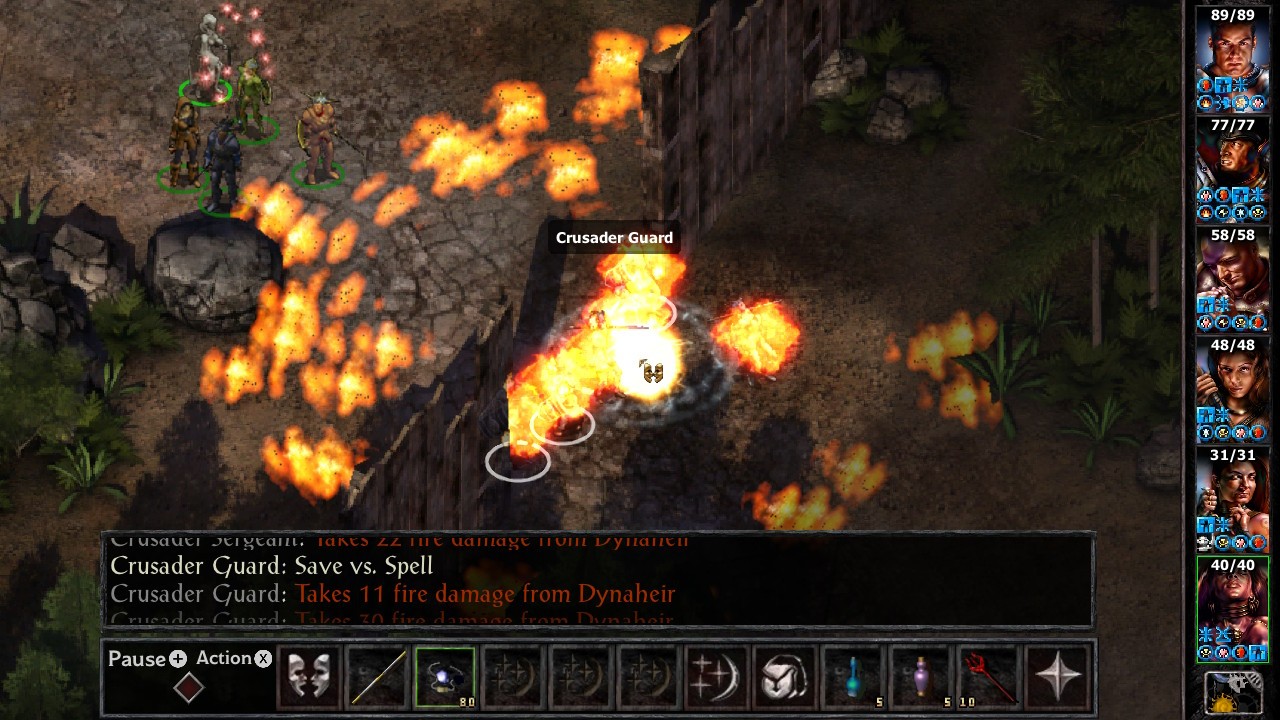 The Baldur’s Gate games are isometric RPGs that are heavy on three things: true to form AD&D play, eyeball deep story and exposition, and amazing versatility in gameplay approach. If you are missing the days of sitting around the pool table in Mike’s basement playing until 3 in the morning, these are some of the best video game representations of that experience. Baldur’s Gate gives plenty of direction as to where a player should and should not go for their next move to push the quest forward, but a lot of things are, ultimately, up to the player. For example, right at the start of Tales of the Sword Coast, you can immediately become a massive pariah by murdering some of the townsfolk. Why on Earth you would do that, who’s to say, but there’s always one or two murderhobos in the campaign, why not make a quicksave and see what happens? Now, of course, there are plenty of better options to view how to succeed at a challenge (stealth versus strength, cunning versus intimidation), but a lot of video game players will immediately want to test the age old “can I go full psycho in this game?” The answer, like Wasteland, is “yes, within reason.” You can have the most jacked characters in the world, but the wrong move will end your campaign, usually through your unfortunate death.

Navigating the worlds of Baldur’s Gate I and II are difficult at first, but they quickly become easy to acclimate. Strangely, there was a lot of praise for the ports of Baldur’s Gate to iOS and the touchscreen controls, but those are inexplicably absent in this version. Nevertheless, you begin to understand the times where you can walk around with the JoyCon, and times where it becomes a sort of point-and-click interface that pushes you along, giving you more opportunities to explore the areas around you, interact with characters and search areas for hints, treasure and enemies. Most of the menu options show up on a choice wheel that the player triggers with the shoulder button, giving you all the different, complex menus (inventory, quest journal, character sheets) without clogging up the screen, a brilliant and streamlined decision. When combat starts, the game incorporates an optional pause feature that allows you to choose what you’d like to do in terms of decisions, and, my God, there are a lot. Depending on the classes in your party the options for how to attack the enemy are endless, from straightforward “Attack” and spells to cast to using different items, positioning yourself for strikes and even more ideas that I haven’t yet discovered. What’s really crazy is that the combat isn’t arbitrary and boiled down: under the veneer, the BioWare/BeamDog joint effort is calculating and performing valuable dice rolls, bonus adjustments and resistance checks to deliver accurate, pinpoint reactions to all decisions made by the character. And it doesn’t just apply to combat either: lock picking, trap defusing, even honesty checks are done the old fashioned way, though you’d never see a single element of that leaking through. 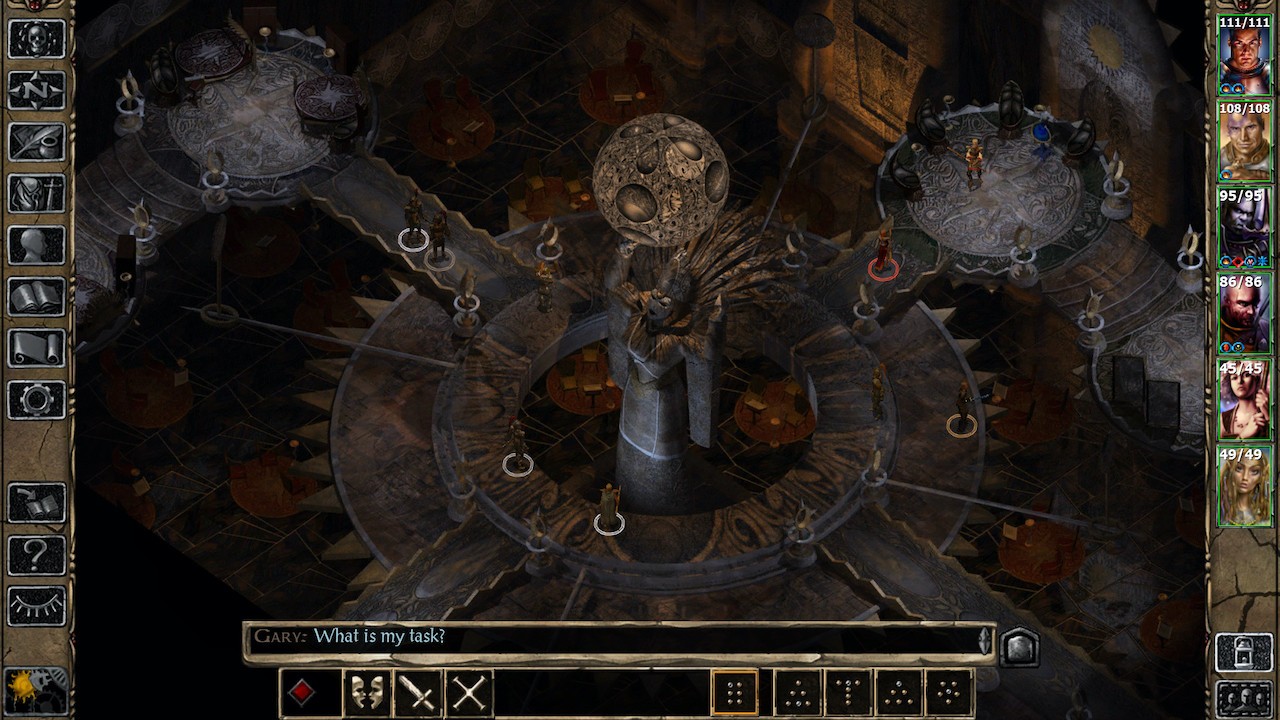 Though the games do show their age, most of the solid elements stay the same throughout. It’s apparent that Seige of Dragonspear was made years after the original games, both in graphical design and certain choices in landscape layout, but, for the most part, cohesion exists throughout. That’s probably the most exciting part of the Baldur’s Gate I and II: Enhanced Edition collection is the ability to carry your character from the start to the end. You can take the magnificent start of your first character, the lonely Ward of Gorgion, and allow them to ascend all the way through the original game, fighting the devils of the Sword Coast, defeat Caelar at Dragonspear, move into the Shadows of Amn and so much more. The storytelling, complete with a strong voice cast for NPC exposition, spins a complex and beautiful world within the Forgotten Realms that the player is actively a part of, though it can be strange to watch the same character evolve and transmutate between campaigns (though Dragonspear is technically a bridge between Baldur’s Gate I and II, it’s the newest and looks the best). The overall effect, though, is not lost, as players are treated to hours upon hours of gameplay.

Lastly, it should be noted that Beamdog and BioWare really made sure that Baldur’s Gate I and II were accessible to whomever was coming into the world. For those who are more into the storyline and the explanation of what happens, there’s a legitimate “story mode” that keeps the player from ever dying, lowers the difficulty significantly on enemies and basically turns this campaign into the most straightforward (but still enthralling) RPG in existence. On the other hand, the difficulty level can be ratcheted up to Easy, Normal, Difficult, Intense, Insane and, finally, Champion of Bhaal, which is positively punishing and should only, only be done if you’re ready for a serious fight every step of the way. I love games that allow you to approach them from different angles. With some history with Baldur’s Gate II in my past, I was happy to put the bar higher and sing for my supper, but I was curious about Dragonspear and the BFD surrounding it (spoiler: everyone overreacted, it was a good campaign), so I set it to story mode and let the game carry me through to my eventual escape. It’s really cool to have these options, because who doesn’t ever want to decide if they’re here to play or just here to watch?

While I’m miffed and disappointed about the lack of touchscreen controls, there’s no denying the massive amount of content, and quality content at that, which resides inside Baldur’s Gate I and II: Enhanced Editions. These games come together, come with all the DLC, and will positively suck up the remainder of your year if you let them. The systems are intuitive, and there’s a level of nostalgia both in the games themselves and in the handling of the world through the AD&D rules. It’s what I grew up playing, and it’s what many older players will remember as well. If you’ve got love in your heart for these old school adventures and don’t mind keeping it to your JoyCons exclusively, then there’s quite a bit of a tale to be told in the world of Baldur’s Gate.

Baldur’s Gate and Baldur’s Gate II: Enhanced Editions come together, with all the DLC, and will positively suck up the remainder of your year if you let them.