There isn’t a grey area for me in videogame themes, as I can differentiate what is real and what is not. Sometimes the morals projected in a game may grate on a few gamers and can’t be avoided as it’s part of the narrative, other times some mini-games or sub-quests raise an eyebrow but are optional. Ski Sniper has one agenda: snipe skiers on the piste.

Looking at the trailer when this first came out, it made me a little uncomfortable as it’s quite a cruel concept, but a lot of us do this sort of thing in a game without any second thought. When the goal is to snipe an innocent skier though? It raised a few questions. These aren’t henchmen or puppy kickers; they’re just random sports folk and hobbyists minding their own business. Perhaps that’s why this feels awkward as it doesn’t feel ‘right’.

As I began, there isn’t much of a grey area for me. Picking up pedestrians and driving them off a cliff is fun but entirely optional in GTA V. You don’t have to hogtie locals and leave them on the track in Red Dead Redemption 2. Still, in Ski Sniper, you do have to snipe some innocent bystanders. Then you play the game, and kick that orange box in the teeth and forget all your morals: Ski Sniper is a fun concept, for sure. I was heading that way, wasn’t I? 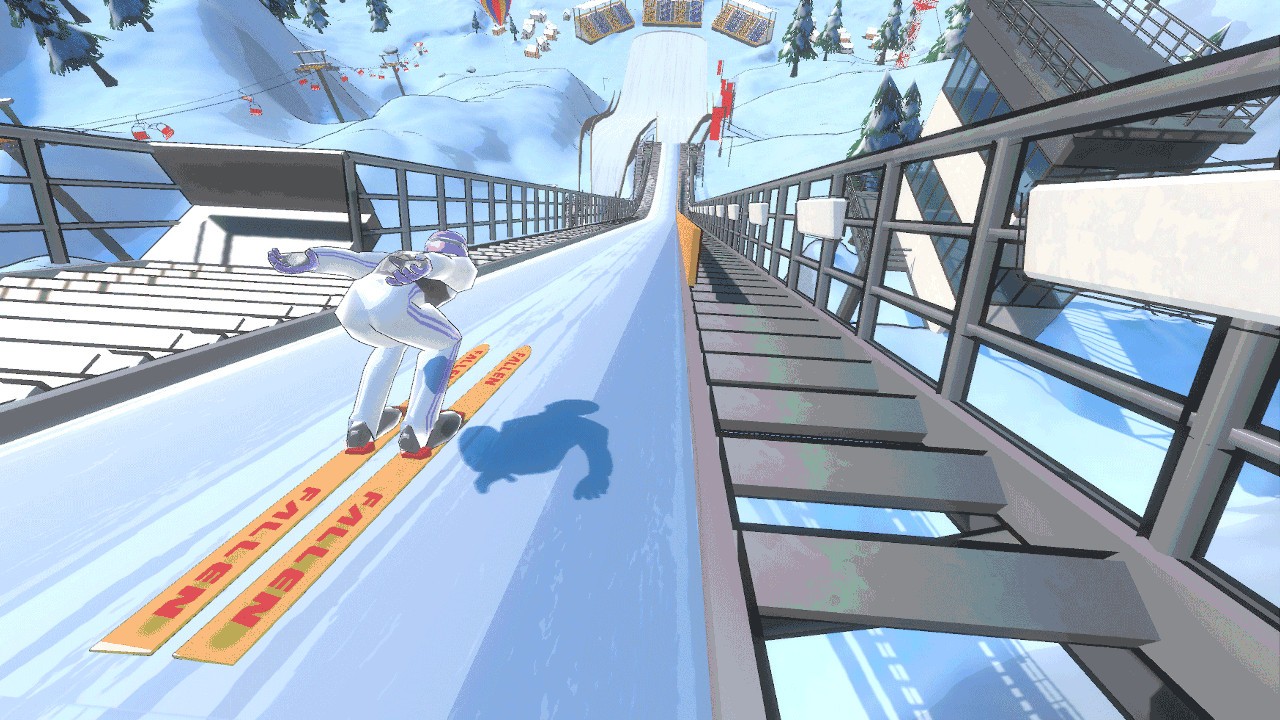 If you’re familiar with the Sniper Elite series, you won’t be disappointed with the setup here as you look down your scope, take the shot, then watch the bullet glide effortlessly in the wind smashing through a series of organs and bone. It’s as fun as breaking Easter eggs, only the eggs here are the skeletal frames of said skiers. Gaming does invoke violence. No, I joke. It’s gratuitous and a lot of fun.

Playing a sniper has always been fun in-game, but until the Call of Duty series, and before that, Medal of Honor, introduced first-person sniping, it was never really that satisfying. Cue online multi-players such as Fortnite and sniping arguably isn’t as fun when comparing it to the traditional method; finding an elevated position, calculating the distance and the conditions, then making that one bullet count. Something is gratifying about the strategy of lining up a shot to see the results of a ragdoll skier flying across the screen. Then it kicks in again. Is this game wrong? Could we not be sniping verified evil people, or at least use rubber bullets? Nah, it wouldn’t be as fun.

But when you become acutely aware of the content, you start noticing that this is a game and not real life. The visuals confirm that as it’s hardly cutting edge and feels very much last generation. Even the choice of fonts when you eventually snipe your first target successfully looks like a font download off of the internet from a freebie site. It lacks polish. Additionally, the fundamental part of the game is being in a stationary position and shooting your targets from greater distances or awkward spots of elevation. Surprisingly, the supposedly more difficult sniping points were much easier than the earlier ones, and positioning makes a difference.

You start with a basic rifle that has a slow rate of fire, so your bullet needs to count. When it comes to controls, you use the analogue sticks to fine-tune your shot, zoom in or out depending on the complexity of the shot, then slow your breathing down. Much like other sniper titles, holding down the Y button freezes any stability issues with your gun and time briefly slows down, allowing you to hit the mark. This all sounds straightforward, but it’s not. You’re trying to hit a moving target, and while you know the direction they are going, the first gun and zoom ability are so weak, you’ll often miss every time. Ski Sniper got old quick, and without the trophy of hitting my targets, I took a breather and left it for a day. 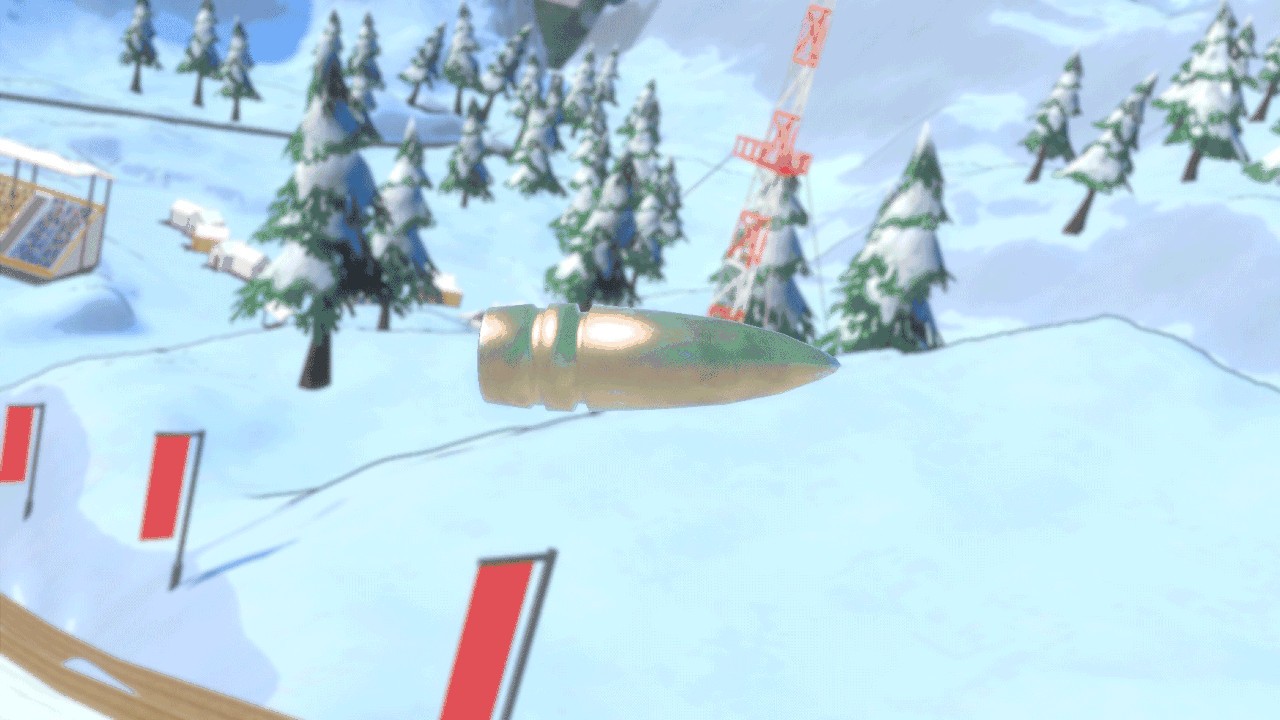 When I returned, I realised that other locations were unlocked, so while it may seem more challenging to take a shot from a cable car, I had a bit of success with it. You get multipliers if you hit certain parts like the lungs or , the brain. The chances of that happening would have been one in a million as the accuracy in this game is ridiculous. Though you have the option to slow down time, hitting a skier in the side or back is much harder than it looks. More so when you get multiple people hitting the piste, and you’re waiting for reloads between shots. However, if you do manage to get some shots in, you get that glorious slow-motion bullet piercing through the sky, followed by an x-ray of the victim showing the entry and exit points and your subsequent score. Hi-scores means money, money means new guns and these are complete game-changers.

Additional weapons offer a better fire rate, stability and zoom. You need all of these, though not as much the stability as slowing your breathing remedies that. I would have liked the starting weapon to be a little better, and perhaps the other sniper points unlock as you progress with better weapons. This initial experience may put off a lot of people as there isn’t any consolation prize each round so you can go for ages without getting any money to unlock a better gun. But that’s not the biggest issue. It’s the critical point of the game: controlling the scope. I don’t doubt for one second this is way better on a mouse, but with the joystick, it’s too slow. Even if you were able to use motion control effectively, the reticle is just too small to be ready to hit anything.

If you stick with Ski Sniper, you’ll start to accumulate some cash and buy new guns. This does make the game much easier and fun. The only thing is you’ll see everything from the initial 10 minutes. Other than unlocking new guns, you can go to any location; then after shooting (and missing) one of the skiers for the umpteenth time, there’s not much else to it. For some, that’s fine as Ski Sniper can kill some time (or skiers with the right tools), but it’s unlikely you’ll keep coming back to it. If the concept still appeals to you, and you have the option, look into the Steam version and use a mouse instead.

An interesting idea with some above-average physics, but you’ll see everything in the first 10 minutes. If you can’t unlock a new gun, you might give up on this early as the beginning of the game with the starting rifle is just too fiddly and precise on a joy-con or pro controller.