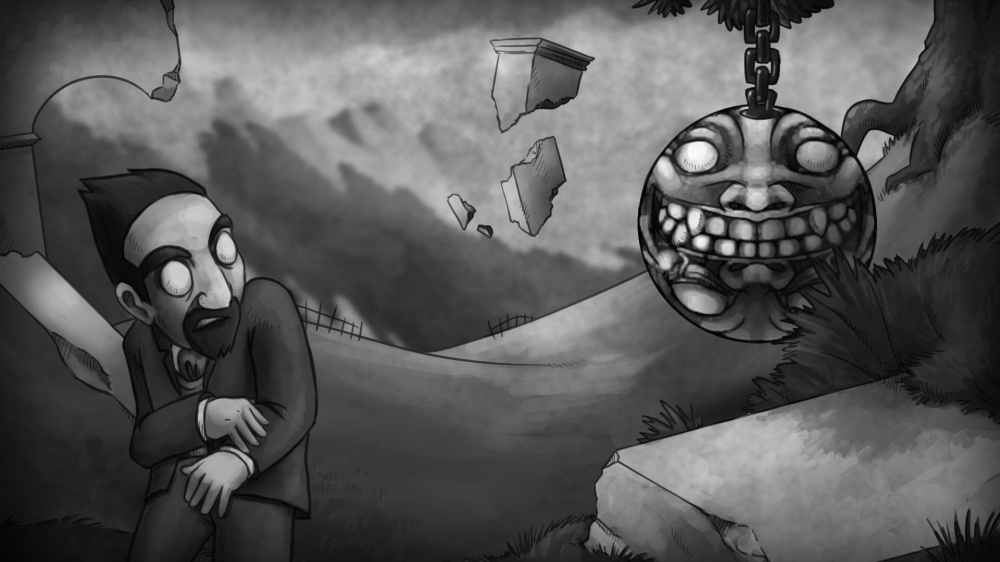 Quick, how long has the Nintendo Switch been out? If you guessed about six months, you’re surprisingly spot on. Alright, another question: how long has Steam been available? That answer is a stunning almost fourteen years. There was, of course, a plethora of PC gaming long before Valve launched the All Father of DRM gaming, but Steam, arguably, made a convenient and accessible global market that hadn’t previously been seen. So there are literally thousands of games that players could have easily missed over the years, especially if you weren’t playing hours and hours every day for the past decade. So I was pretty pleased to find that the indie classic The Bridge is the next port to come to a new generation.

The Bridge is a really interesting puzzle platformer from 2013 that really captured some of the original indie ideals of storytelling through inference, play and players also making their own conclusions from relatively open ended elements. You play an unnamed scientist/physicist who tells the tale of his own studies, discoveries and the dark elements that inhabit his own mind, as well as that of his colleagues. Everything unfolds one chapter at a time, with a variety of new and intriguing mechanics being introduced to coincide with the narrative. For example, the beginning chapter speaks of perspective, which is the primary hurdle in the puzzles, whereas the second chapter brings about this idea of a consuming void which, surprise, is both a trap and a tool for the puzzles themselves.

The Bridge operates and succeeds on a number of levels as both a game and a vessel for a tale. The artwork, simply put, is a gorgeous, pencil drawn gallery of M.C. Escher-esque levels and worlds. You feel the dedication and care put into each design, which also helps to make otherwise impossible seeming puzzles plausible. When something clicks, you might notice how the shadows of a curved column show that it can be both the ceiling and the floor, which is why you didn’t fly off into the void. This artwork is also held in atmospheric balance with the soundtrack, which is haunting and has a lot of calliope elements to give that old timey, spooky but familiar effect. Purely from an artistic standpoint, The Bridge succeeds beyond most expectations. 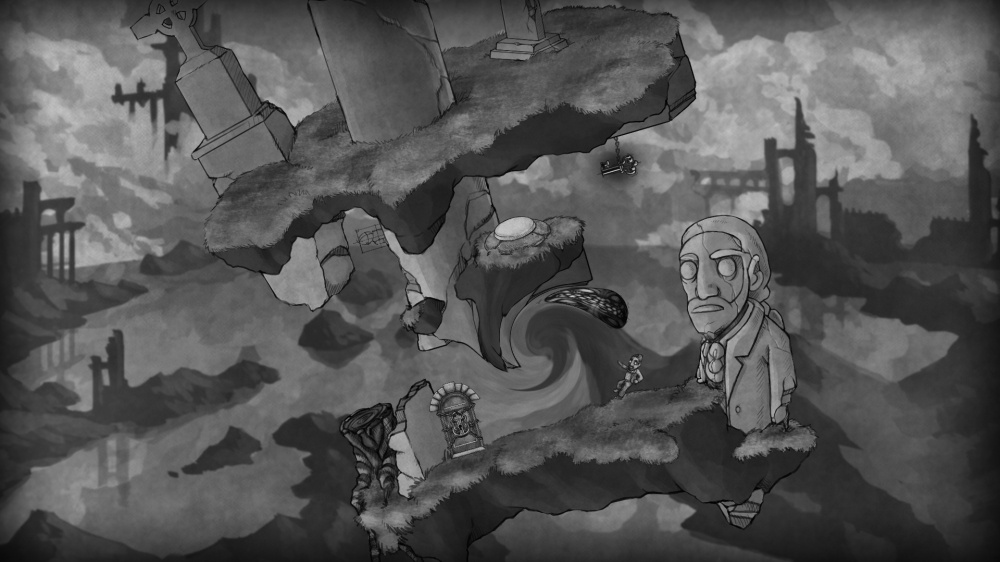 The puzzles themselves ramp up in difficulty considerably fast. A cocky player will get through the first three stages with relative ease: your primary buttons are walking, being able to tilt and spin the room to reach otherwise isolated areas, and a time-rewind mechanic when you trap yourself. But you’ll quickly realize that most levels require a bit of trial and error and, sometimes, almost literally thinking outside the box. And, since the chapters are short, you basically get a full feeling for what you think you should be doing before you get thrust into a new chapter with a whole new target and mechanic. The first time you encounter a void, you can become permanently trapped and it’s game over. However, not two levels later, you realize that being trapped in the void can act as a holding pattern while you rotate and manipulate other aspects of the room. So The Bridge not only challenges you with some amazing concepts for what to do, but then forces you to look at them in a different light and find new ways to utilize them for your own success.

Each chapter is only about 5-7 levels which, arguably, is quite short. There is a mirror mode when the game is finished, however, that gives brand new light and a much greater task in problem solving to essentially work against what you already know in order to find a new way to go. In one of the better carrot moves, the achievements from the Steam edition of The Bridge have been put into the Switch version, so you can see what you have accomplished, what still needs to be done and, also, giving yourself some small challenges for personal satisfaction. Completing a level called The Library, for example, without making so much as a small sound, is a perplexing but enjoyable feat that you can try to pull off at any time.

As a port, The Bridge does have some small caveats. Sure, the game looks great, and the rotation effect actually plays perfectly onto the handheld mode of the Switch. I loved how the game looked and felt docked and undocked, and think it’s a wonderful fit. However, there is a delay in loading screens between levels, chapters and anything that requires you to change boards. Fans of the game are already well aware of this, but, for new indie players, it comes across as sluggish and annoying in comparison to the fast loads of many other indie games that we’ve already come across before. I don’t know if it can be sped up in a future patch but, if we’ve seen anything, the fans will definitely take to social media to ask for something to be done. 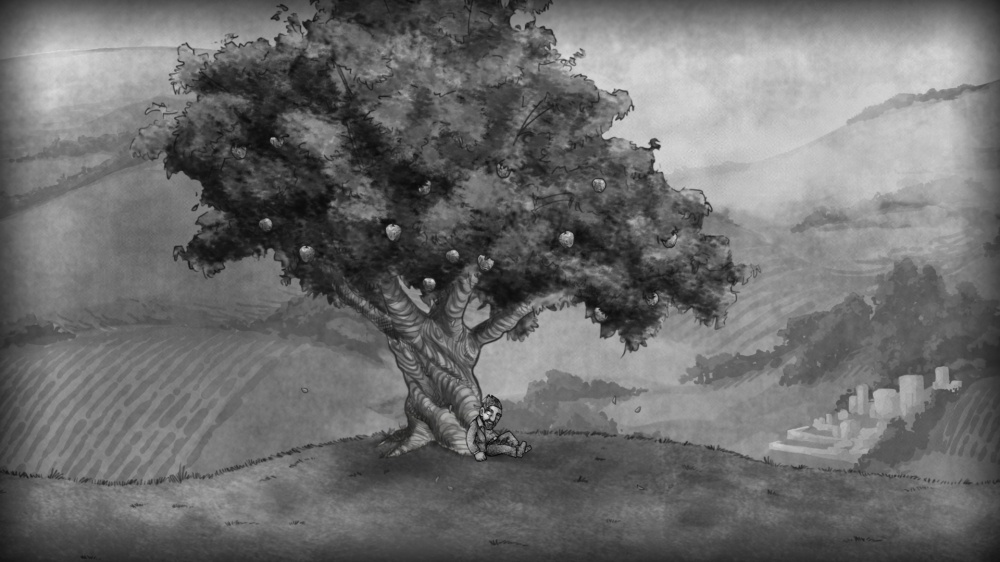 The only other hesitation I have is that the game is short and doesn’t necessarily have appeal if you’ve played it anywhere else. It looks great, don’t get me wrong, and, if you love the game, you’ll want to enjoy The Bridge again on the Switch. But, if you already own it on Steam or another console, there isn’t anything extra that was brought to Nintendo. The Quantum Astrophysicists Guild has certainly taken care in helping bring their acclaimed darling to the Switch, so, for newcomers, this beautiful package may be more than enough without expecting extra bells and whistles.

I continue to cheer and support the ever widening river of classic indies heading to the Switch because, let’s face it, we can’t play every game forever when it comes out. Things get lost in the sea of time, and you may only remember them when you happen upon them by chance. The Bridge is all about the manipulation of time and space, so I think the wormhole that’s opened up to allow 2013 to travel to the present should be allowed and given the same amount of attention as other incoming Nindies. The Bridge will be available from September 7th, so dust off your abacus and prepare to have your mind warped all over again for the first time.