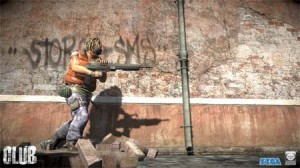 Like the idea of a score based shooter? Put off by Bulletstorm’s goofy dialogue and Bodycount’s shoddy game play? Why not try Sega and Bizarre Creations’ rather brilliant and criminally overlooked, The Club.

While it may be a third person shooter rather than an FPS, the main goal remains the same – kill everything, keep your combo rolling and try to look good doing it. The big difference here is that unlike Bulletstorm and Bodycount, which both feel and play like traditional shooters with score based combos tacked on top, The Club actually plays more like a racing game masquerading as a shooter…..or PGR with guns to be exact.

Bizarre Creations’ work on the Project Gotham Racing series can be felt at every turn. Like that series, The Club shares a very similar ethos of doing things with style. Sure, you could treat The Club like a traditional third person shooter just like you could treat PGR as a traditional racer but to do so would be to completely miss the point.

Taking its core mechanics at face value, The Club isn’t actually all that impressive – the gun-play, controls and weapons are all rather basic to be honest. But when considered within the confines of the games design, these simplistic controls and basic weapon options are actually perfectly suited to the overall game play. Why? Because of speed. The Club is a game that you are literally encouraged to race through. You still need to take down the enemies dotted around each map but you’ll want to do so as quickly and as accurately as possible. There will be no time to take in the sights or to carefully switch weapons based on the situation. Nope, this is all about reflex and memory.

A talented player will be able to put up a decent score on any level first time around based on reflex skill alone but if you are planning to challenge for the top honours, you’re going to have re-do these levels time and time again. Like PGR, this is a game about knowing the course and knowing how to drain every available point out of each situation. It’s utterly old school in design and all the better for it. It may not have the wow factor of Bulletstorm but believe me, this is the infinitely purer gaming experience……it’s also mercifully devoid of terrible dick jokes. 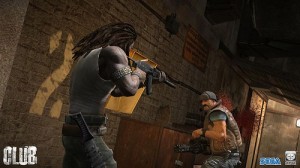 As you charge head first through a level with little regard for your own well being, you’ll find yourself instinctively waiting for enemies to pop up from cover, already planning your next kill before your bullet has had a chance to lodge itself between some poor schmoes eyes. It’s a game that you will play almost instinctively as you become accustomed to the fixed enemy pattern and consistent bonus markers of each level. This isn’t Call of Duty or Gears of War with a points system. No, this is a wholly unique experience and the very definition of a gamers game. This is classic arcade gaming with a next gen sheen. This is quite unlike anything else on the market. This is only £3.

Yep, that’s right. You can pick up this pitch perfect piece of score chasing goodness on PS3 and 360 for a measly £3. I think it’s an actual a crime not to pick it up at that price……honestly, you could do time.