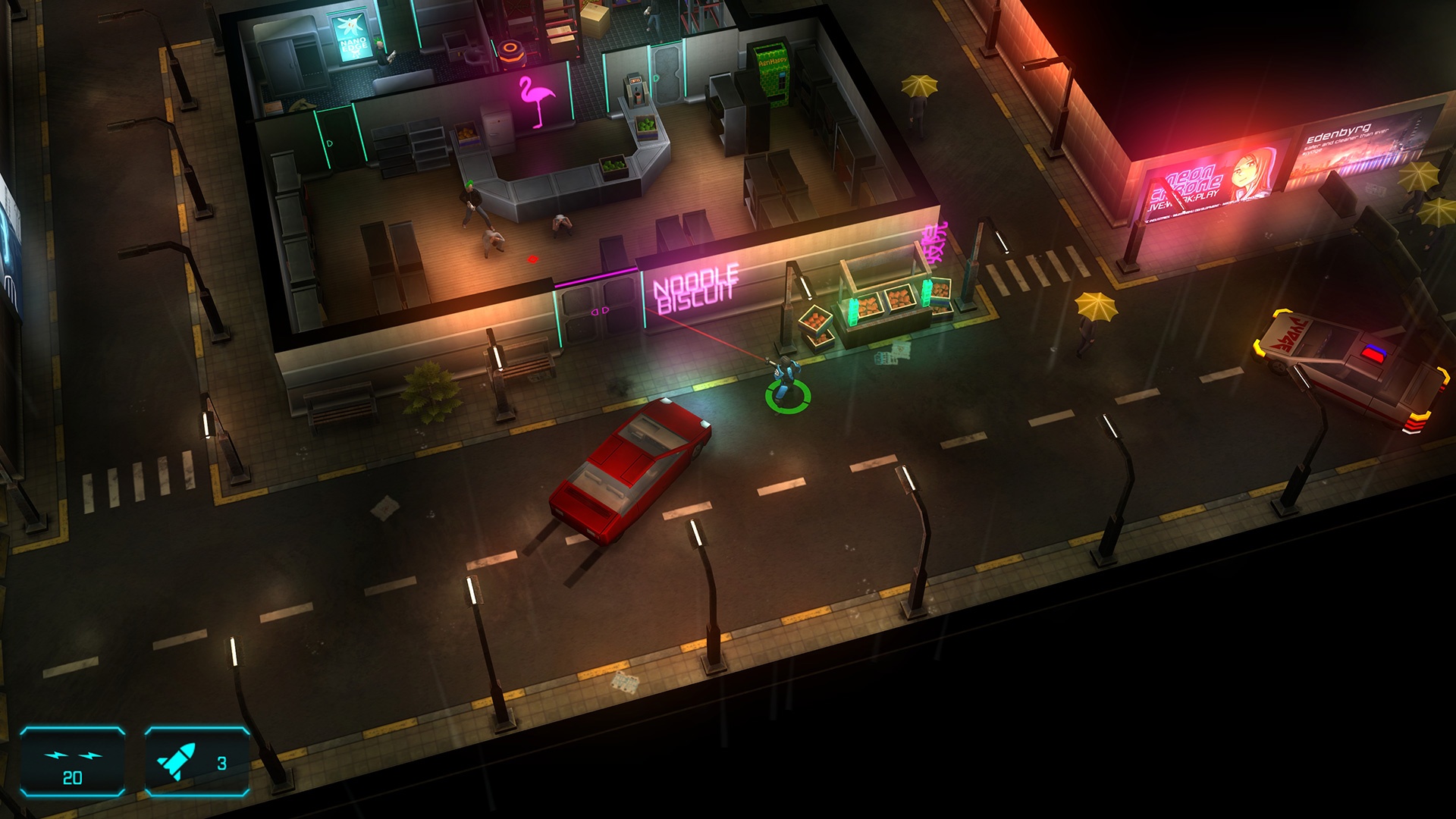 10tons studio has always been known for making really competent and compelling top-down shooters, and JYDGE is no exception. Based off on the Neon Chrome universe, JYDGE puts you in the shoes of, you guessed it, a JYDGE, which I guess is just the way that the developers came up with when trying to base off the concept of a game on the iconic figure that is Judge Dredd.

As you could expect, based on previous games from the studio, the story is far from being one of the game’s strongest features, but I appreciate that they always try to make something that makes sense and provide some sort of background to all the action that’s going on. Despite taking place in Neon’s Chrome universe, I’m pretty sure that you don’t have to play it in order to enjoy JYDGE, at least that’s how I feel having not played it, at least not yet. With that said, the story itself is pretty simple. The game takes place in Edenbyrg, a city that is supposed to be an urban paradise but is plagued by crime, which prompts the police to activate the JYDGE.

The game offers 18 missions, which are split between 4 acts, that you can play multiple times, and the game incentives you to do so. The first time you play each mission you’ll have 3 medals that you can get by completing certain criteria, and, after beating said mission, you can play that very same mission in Hardcore mode, which makes everything harder, including obtaining those 3 extra medals. In order to acquire medals, you do not only have to complete the main objective, but you also have to complete two others, which can be completing the mission under a certain amount of time, killing all enemies, not being spotted, amongst some others. These secondary objectives that you can complete really spice things up, and can turn what was previously a rather easy mission to something truly challenging. 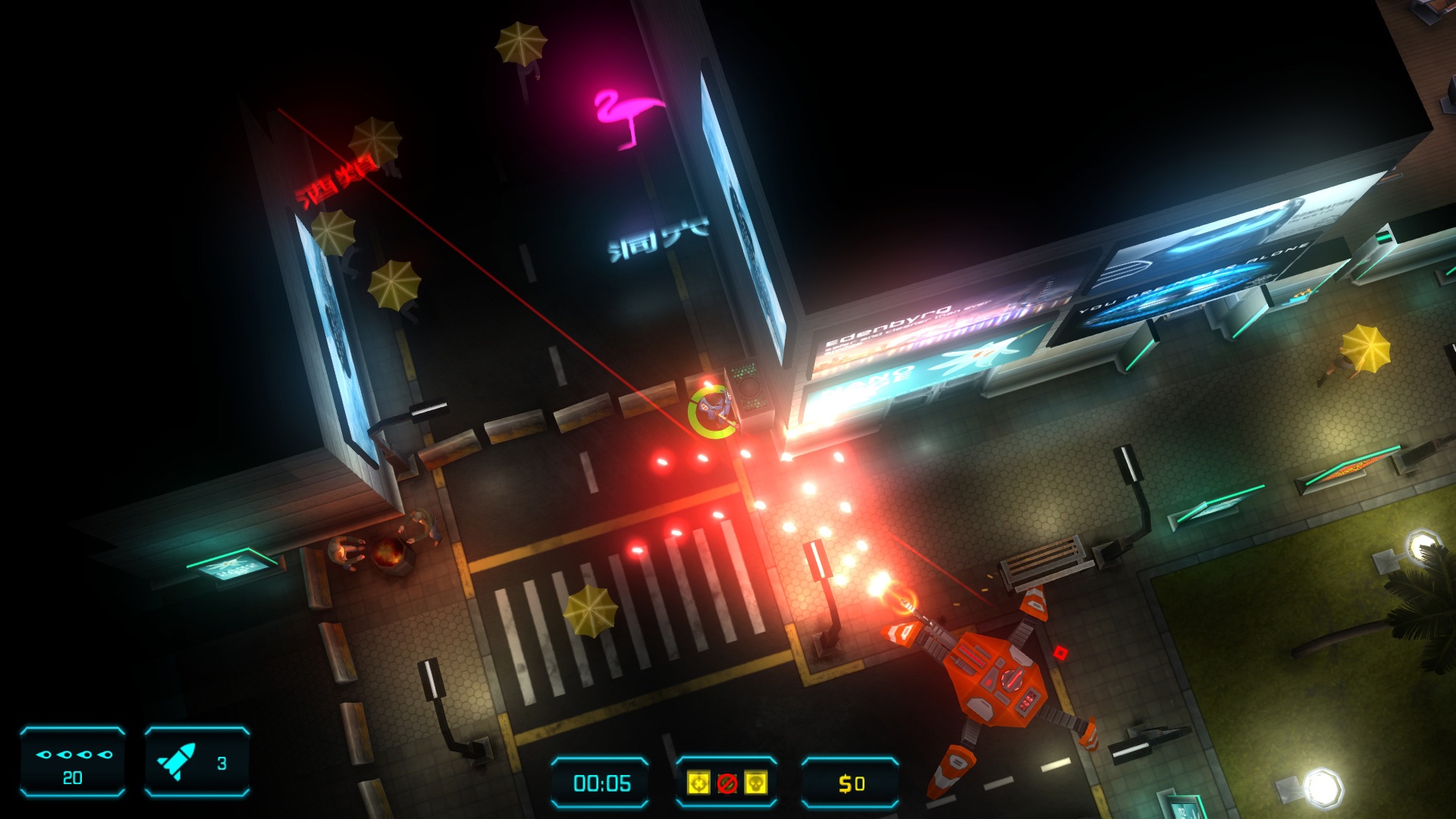 Now, you might be wondering what medals are for, and why should you even bother replaying old missions, but, rest assured, these are intrinsically tied to the game’s biggest feature, and that’s the game’s enormous amount of customization. Medals are not only required to unlock more missions, but they’re also required to unlock new weapon mods, special weapons, fire modes and perks. Still, after unlocking these things, you must also have enough credits to purchase them, which you can acquire by looting from fallen enemies, containers and just overall completing missions.

While there’s a huge amount of customization, the way your weapon, the Gavel, and your character look still remains the same. In any case, you can equip your character with up to 4 different perks out of a pool of 35. These are passive perks that improve how strong you are and they come in all shapes. There are some really cool ones, such as the ability to electrify nearby enemies, make yourself invisible when you’re not moving, have a friendly drone following you, a front shield that protects you from incoming damage, amongst many others. In the same way, there’s also dozens of special weapons, fire modes and fire modes that you can acquire. From wall piercing ammo, rocket launchers, C4, life stealing bullets, plasma, bouncing lasers, to your standard weapons such as a shotgun and an assault rifle, this game has it all. There are tons of different combinations that you can come up with all of these, assuming you have what it takes to unlock them all, and I’m sure that will do a lot to please those that are fans of customization and of games that let the player experiment and play in different ways.

In terms of variety of levels and enemies, the game offers a good degree of both. Levels tend to have both exterior and indoors segments, and where the action takes place is most of the times up to the play and how you decide to approach the enemies and the objectives. Do you see a room with citizens that you have to rescue but there’s a guard there sitting next to the wall? Why not blow up that wall behind him, thus killing him, and then rescue those citizens after clearing the path to the extraction zone? If you prefer, you can always bait enemies to come into groups and force them into a tight corner where you can blast them to pieces. It’s up to you to combine both your imagination, the tools that the game offers, and the layout of the maps to come up with creative, fun and amusing ways to complete the objectives. 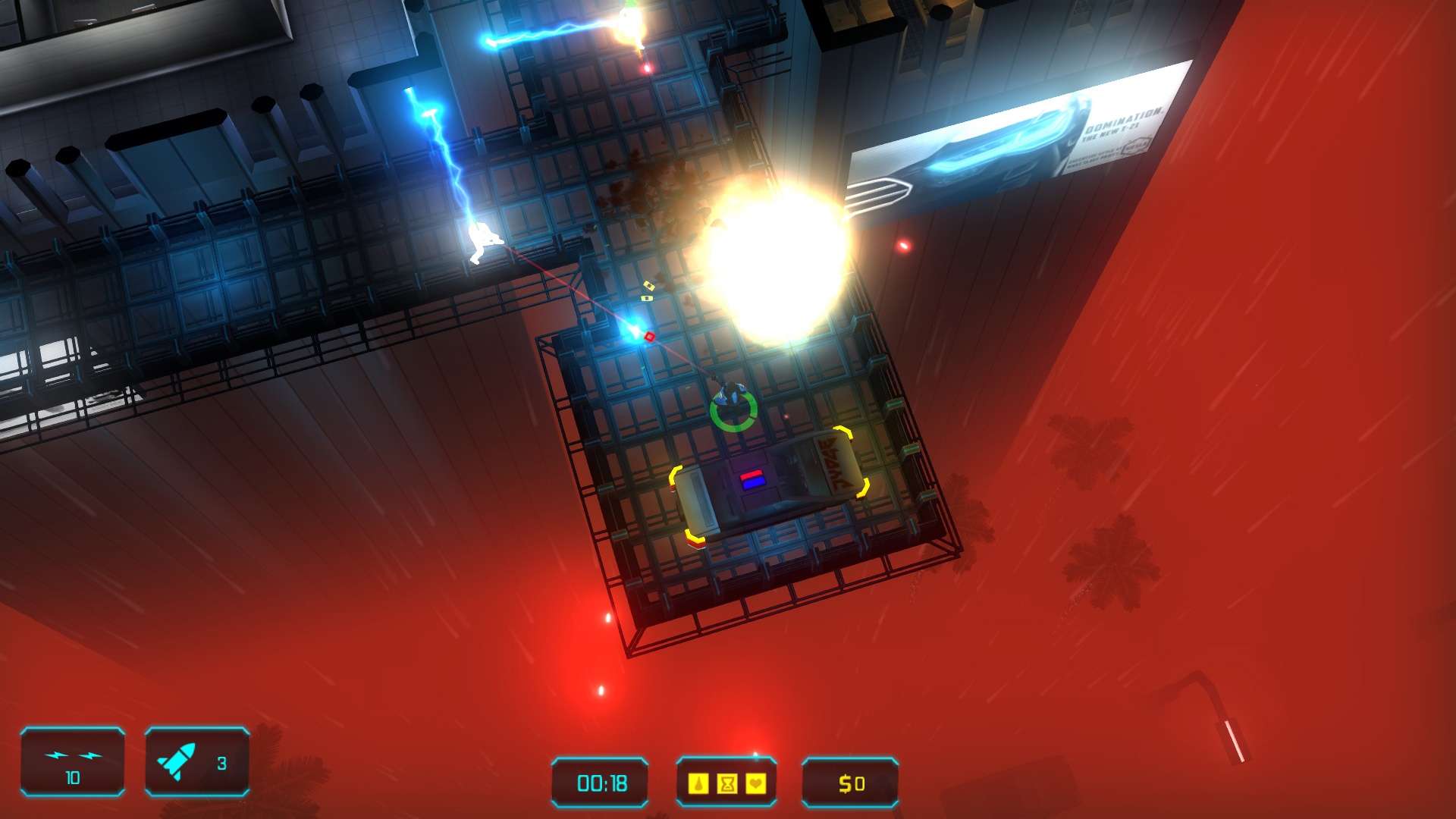 As far as visuals go, the game might not be groundbreaking in that department but I must say that they do a decent enough job in conveying a futuristic setting. Still, I still have the same complaint that I had when I reviewed Time Recoil, and that’s the fact that the animations could use some work, but perhaps that has to do with engine limitations or something that escapes my knowledge. Nonetheless, combined with the visuals, the game’s soundtrack provide a rather amusing setting.

In the end, there is one thing that I don’t really like about the game, and that’s the fact that requiring a specific amount of earned medals in order to progress through the story feels a bit off, as some people might not be that hardcore and want to dedicate such an amount of effort into replaying old missions just so that they can play new ones. However, if you’re a fan of top-down shooters, or if you’ve always been a die-hard fan of 10tons games, I don’t think you can wrong with JYDGE. Achievement hunters and completionists will likely find even more value for their money in a title like this, given the amount of things that you can unlock and try out.