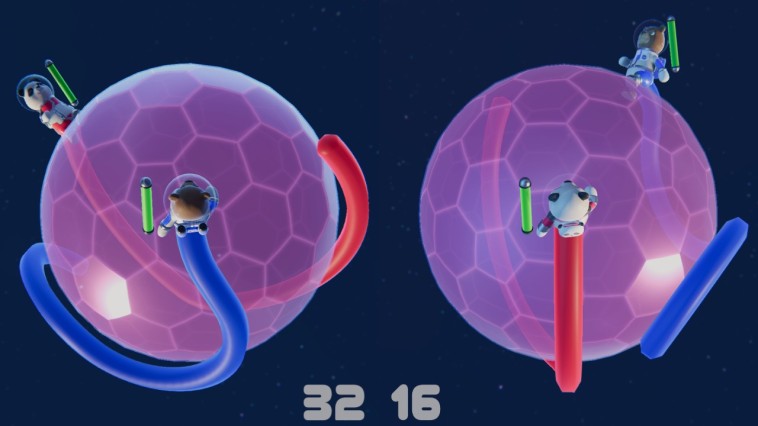 I feel bad as I write this article, because I love the ambition that’s around a game like Astro Bears Party. There is a cute concept, some great art and some serious dedication to making this game for the Switch, even as far as launching a new development team, QubicGames, specifically for making Switch titles. The promise alone should be enough to carry them far, and I did enjoy Robonauts, which they put on the Switch earlier this month. Alas, when you get nothing but dreams and ideas on your plate instead of meat, you tend to go hungry.

There isn’t really a plot line for Astro Bears Party, but I’ll try and cobble one together as best as I can surmise from the layout. You are one of four bears, who all wear spacesuits, and exist in, well, space. You want to run around the planet with your fellow bears, and the objective is to get the other bear to trip up and hit the trail of light that you leave behind. Last bear standing is the winner. This sounds a lot like a multiplayer version of Snake (or a specific mode of Conga Master Party), but there is a bit more to it, mechanically. For one, you can jump over the trail, which, in turn, creates an arc trail that you can walk under but not jump into. You also have a limited amount of rocket fuel that lets you run faster for a sprint, but then need to recover it afterwards. Each bear has its own stats and layout, with some being better natural runners, some having faster sprint recovery, and one bear in particular just being a good, balanced bear. In short, there’s four characters to choose from and you’re trying not to run into each other. 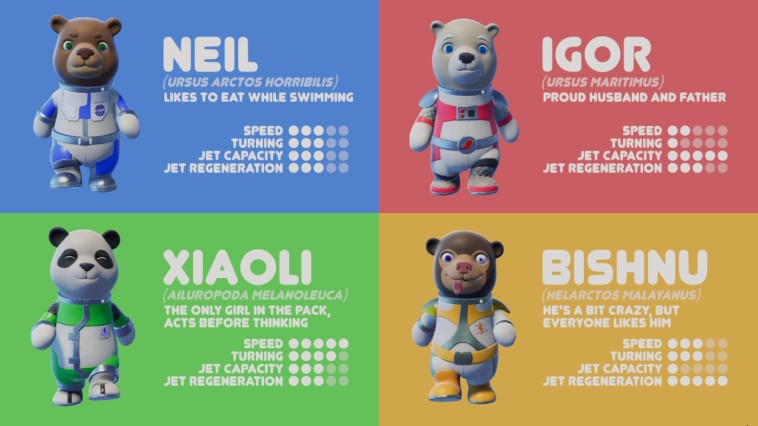 Graphically, Astro Bears Party is pretty cute. Each of the bears is a different species, from the slightly loopy Russian bear, Bishnu to the only female of the bunch, Xiaoli, the Chinese panda. They’re quite cartoony, and unapologetically so, which, ok, they’re bears in space with space suits, I wasn’t expecting gritty realism. The planets all just look like the moon, so I can’t tell if I’m running on asteroids or actual planets or whatever, but I can choose whether it’s small, medium or large. The suits look like they were tailor made for the bears, which is nice, because that’s not even a luxury I can afford. The “space” aspect is pretty simple, just a star field as the background, but at least it’s something.

There is a single player mode for Astro Bears Party, and I think it has more potential than the multiplayer does (despite the multiplayer being the biggest facet of the game). In the single player mode, you have to acquire a certain number of fish spaceships that spawn on the planet, and your trail gets progressively longer as you collect them. The fish are divided into different goalpost waves, so you do get a chance to reset your trail after so many points, but, in exchange, your bear gets faster and faster, making it harder to dodge your own shadow. I quite liked this, and could see myself playing it as a good time-killer when I’m sitting around or on the train, which I did. It has potential as something that could be expanded with more ships, maybe some kind of enemies that you can’t touch, but, for now, it’s all I said it was.

And the potential is what also makes the multiplayer feel a bit lacking. While fun and quirky, once you’ve played with four players once you’ve basically played the whole game. You can set the number of points you need to win in order to be champion and, as stated above, you can change the size of the planet, but that’s all. There’s no obstacles, no hazards, no power ups and no change in the terrain. The only variable in Astro Bears Party is the players themselves and that seems like a cheap way to consider real replay value. I am in the unique position where my kids just love to see the bears running on the screen, so that, in and of itself, holds some merit, but I don’t recommend having children simply to justify playing Astro Bears Party. 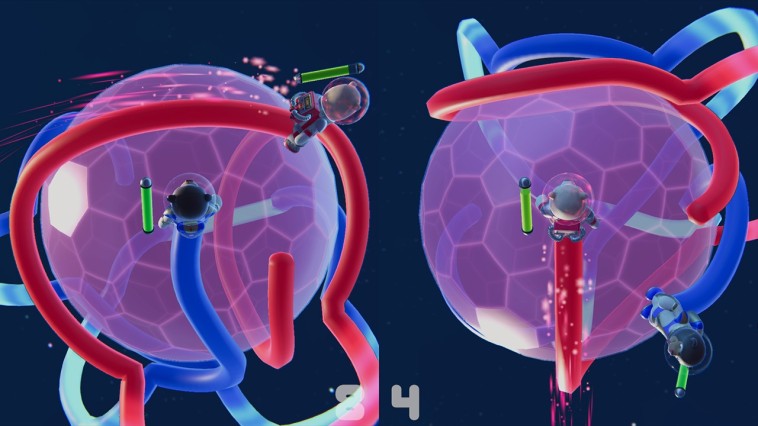 Finally, as a Switch exclusive, I appreciate the consideration for the HD rumble features. QubicGames has taken an ear and an interest in to what can be done with the Joy Cons as far as feedback, with some pretty unique vibes coming in for different elements of the game. The countdown of the clock has a pretty attentive ring to it, and the low rumble when you activate your jetpack is a nice fit. The only reason I ended up turning it off is that it can be audibly deafening when you eventually make a collison and you’re in handheld mode, as the vibrations against the Switch console itself are NOISY. Don’t get me wrong, it’s perfectly matched to the feel of exploding in space, but I just play in handheld a bit and it can actually draw a lot of attention on the train when something is vibrating loudly enough to be heard across the aisle.

I think that Asto Bears Party is a fine concept that has a decent, if limited, bit of value here on the Switch eShop. The designs are endearing and the execution of what they have is well done. The controls are tight enough to make it easy to pick up and understand, but still enough variation in the bears exist for strategizing against friends or playing to your own strengths. However, without a bit more variety in terrain or something additional mixed in (obstacles, characters, something), the game can and will be fully explored in no time flat. I would highly advise that players take a look online before investing, because, if it clicks with you, then amazing, but there may not be enough to keep this Asto Bears Party in orbit.