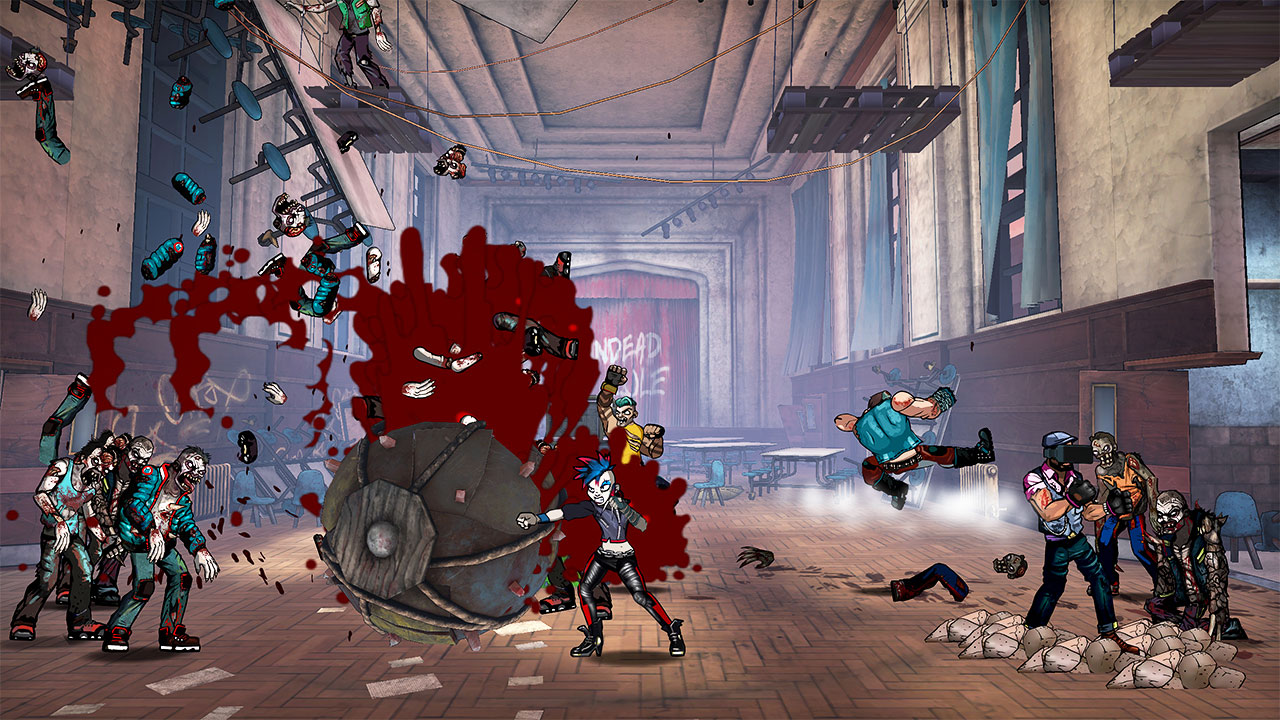 Sidescrolling beat ’em ups made a bit of a comeback last generation thanks largely to the fantastic Castle Crashers. That game took an aging genre and reinvigorated it thanks to an array of slick design choices and its smooth, responsive gameplay. The Behemoth’s tremendously forward thinking game led to an array of imitators, and while it remains the high watermark for the genre, it did encourage a brief renaissance for one of 90s gaming most popular staples.

nDreams’, Bloody Zombies has sadly failed to build upon the foundations established by Castle Crashers, instead delivering what could kindly be referred to as something of a throwback. VR support on PS4 and PC does lend the game a certain sense of modernity, but even that feels tacked on to what is an otherwise painfully average side Sidescrolling beat ’em.

It’s all competent enough on a technical level and the visuals are ok if you’re in to that kind of thing, but even here, it lacks imagination and flair, and while I’ll admit that some of the enemy design is imaginative, any goodwill is usually undone by the bland and largely irritating playable characters who continually spout the kind of annoyingly repetitive dialogue that is likely to have you reaching for the mute button. 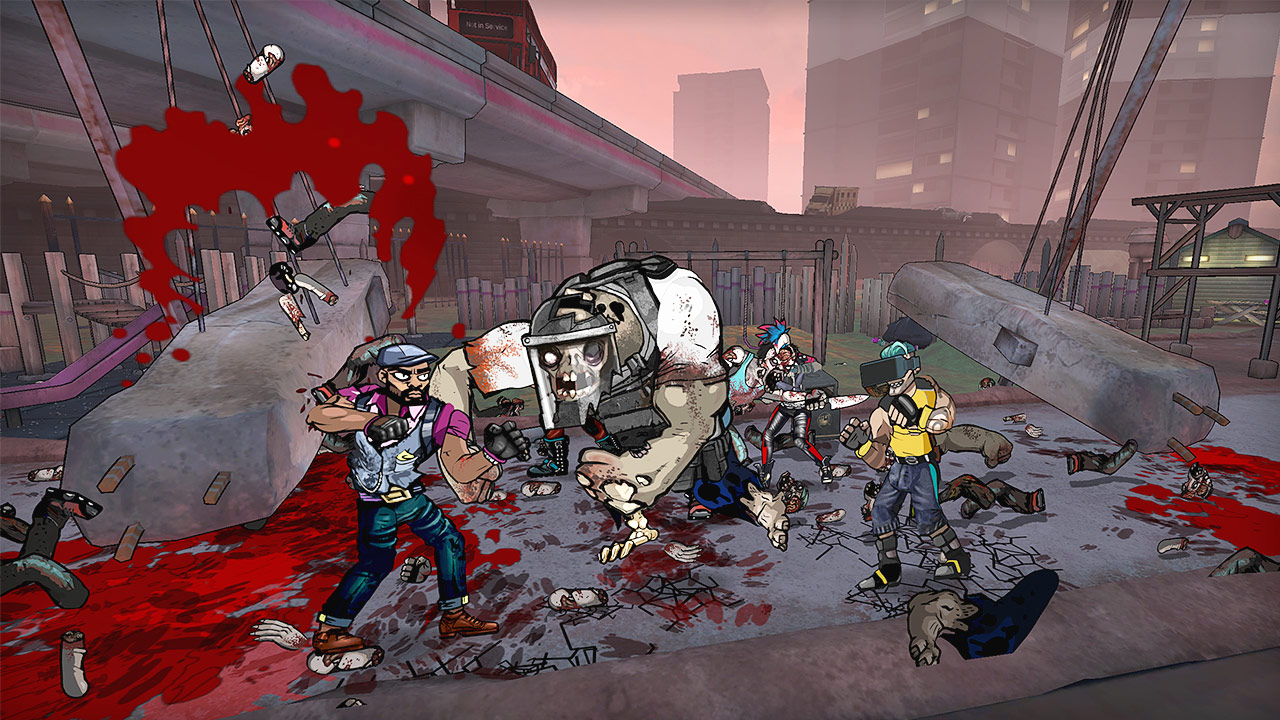 I could get over that if the gameplay was up to scratch, but honestly, in light of more recent examples of the genre, or even when compared to the classic Konami and Capcom releases of the early to mid-90s, Bloody Zombies fails to capture the magic that makes many of those games so fondly remembered more than 20 years later.

Simply put, it fails to deliver the gameplay and content that made Castle Crashers great and falls miserably short of delivering the kind of style and aesthetic impact that made the otherwise simplistic likes of Turtles in Times, The Simpsons, Streets of Rage and Final Fight quite so memorable.

In fairness, Bloody Zombies has made some effort to introduce modern features via the inclusion of additional techniques and abilities that are unlocked as you progress, but even these feel awkwardly implemented and largely ineffectual with inputs for these moves often spongey and imprecise. For as long as the game lasted, I pretty much kept to the same core combos and a handful of simple abilities I had early in the game. There is very rarely any reason to shift your approach to gameplay with most enemies taken down via basic combos alone. 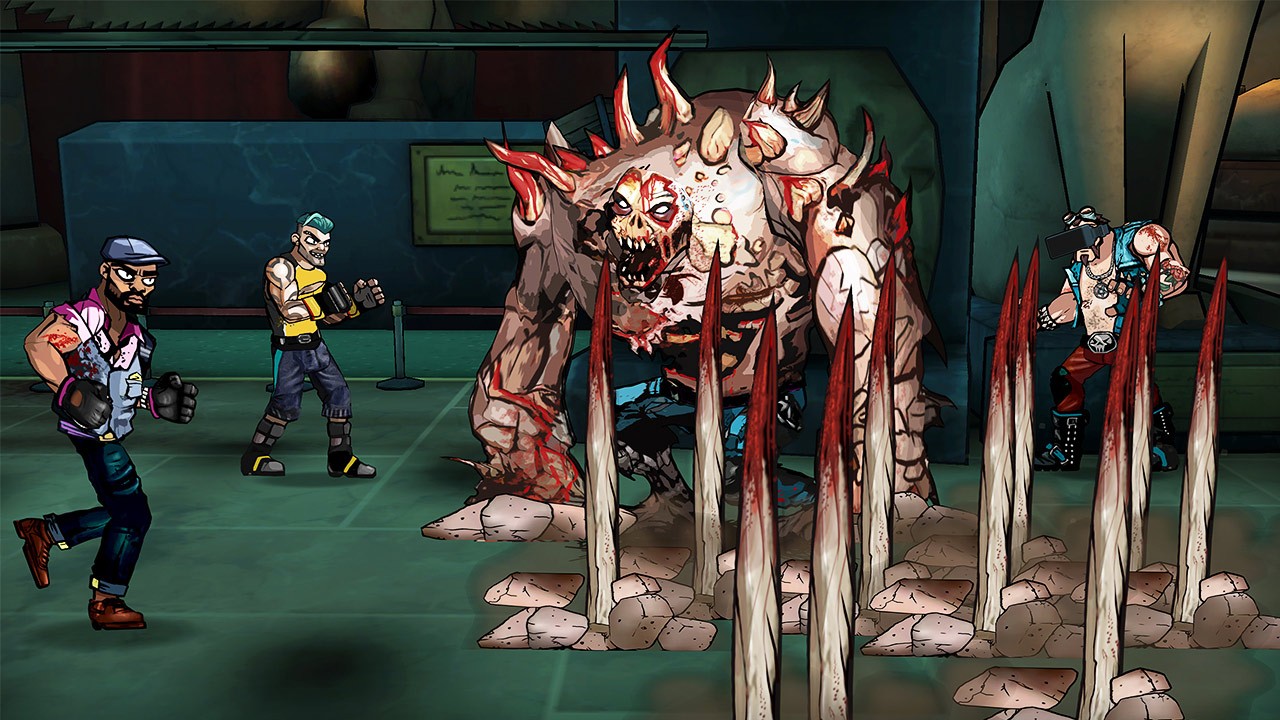 Sadly, the core gameplay is no better. The simple combos work fine, but the game is just so slow. Movement is awkward and attacks lack any sense of style. Enemies too, while often cool to look at, are an absolute pain to put down. They’re not particularly difficult to take out, they just take ages to do so, thus adding to the sluggish gameplay and complete lack of urgency or pace. The absurdly tiny hit boxes don’t help either; unless you’re lined up pixel perfect with your enemy, you’re going to find yourself throwing punches at air before having to awkwardly and yes, slowly moving yourself back into position.

The game is more fun when played with friends of course, and there is the option to play online cooperatively, but solid multiplayer does little to paper over the cracks of what is an otherwise painfully bland and disappointingly cumbersome sidescrolling beat ’em up.

There is a decent amount of content for those who take to it (those blinded by nostalgia perhaps) and some might appreciate the inclusion of VR support on PS4 and PC, but at its core, Bloody Zombies is a cumbersome, forgettable and largely disappointing experience. Too slow and artistically bland to match the 90s classics and too limited and repetitive to compete with the modern likes of Castle Crashers, nDreams’, Bloody Zombies sadly fails to deliver at any end of the gaming spectrum.