There’s not much of a storyline in Aborigenus – the protagonist doesn’t even have a name. All you know is that you’re a lone warrior sent to rescue/avenge your fellow tribesman and off you go, traipsing across a 2D landscape armed with just your trusty spear and the ability to jump pretty damn high. A simple premise has been enough for many of the best platforming games, but will it be enough here?

Unfortunately before going into any further detail I have to highlight a major issue with Aborigenus… it’s really short. I mean really, really short – barely an hour long and that’s only if you take the time to try and kill all the enemies rather than just avoiding them. I’m perfectly happy with a short game as long as it’s fun to play, but this is far too brief and feels more like a demo than a full game. 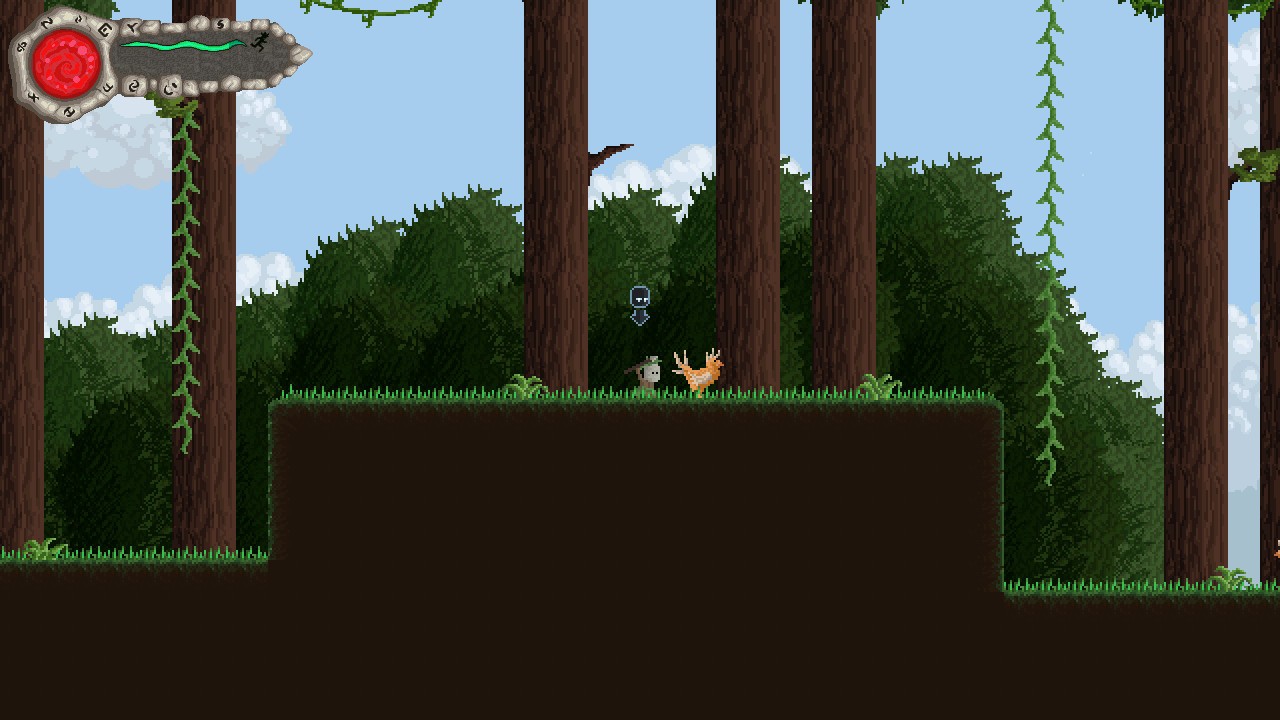 Nevertheless, it’s worth considering what Aborigenus is actually like to play, and to be fair it’s reasonably fun. The pixel-style graphics have a retro look and the gameplay is similarly old-school with fast movement and initially basic controls consisting of just a simple jump and a melee attack. That’s right instead, instead of jumping on the heads of your enemies you’ll need to stand next to them and stab them with your spear, although doing so reveals that most enemies can actually withstand several strikes and will instantly hit you back (so it’s a good thing you’ve got plenty of health). However this then leads onto a fairly unique gameplay element – holding down crouch will put you into a temporary stealth mode making you invisible to enemies. In this mode enemies will harmlessly walk through you and you can also strike with a powerful stealth attack that does far more damage than a regular attack.

Killing enemies also earns you XP and you’ll quickly level up and be able to unlock a projectile knife attack that is far more effective than the regular melee attack. Both the melee and projectile attacks can be improved as you level up, as can your stealth ability to increase both its duration and the damage you can do from it. Later on three magic skills also become available and can be similarly leveled up – although one of the magic skills is a projectile attack which is instantly redundant bearing in mind you already have a regular projectile ability. 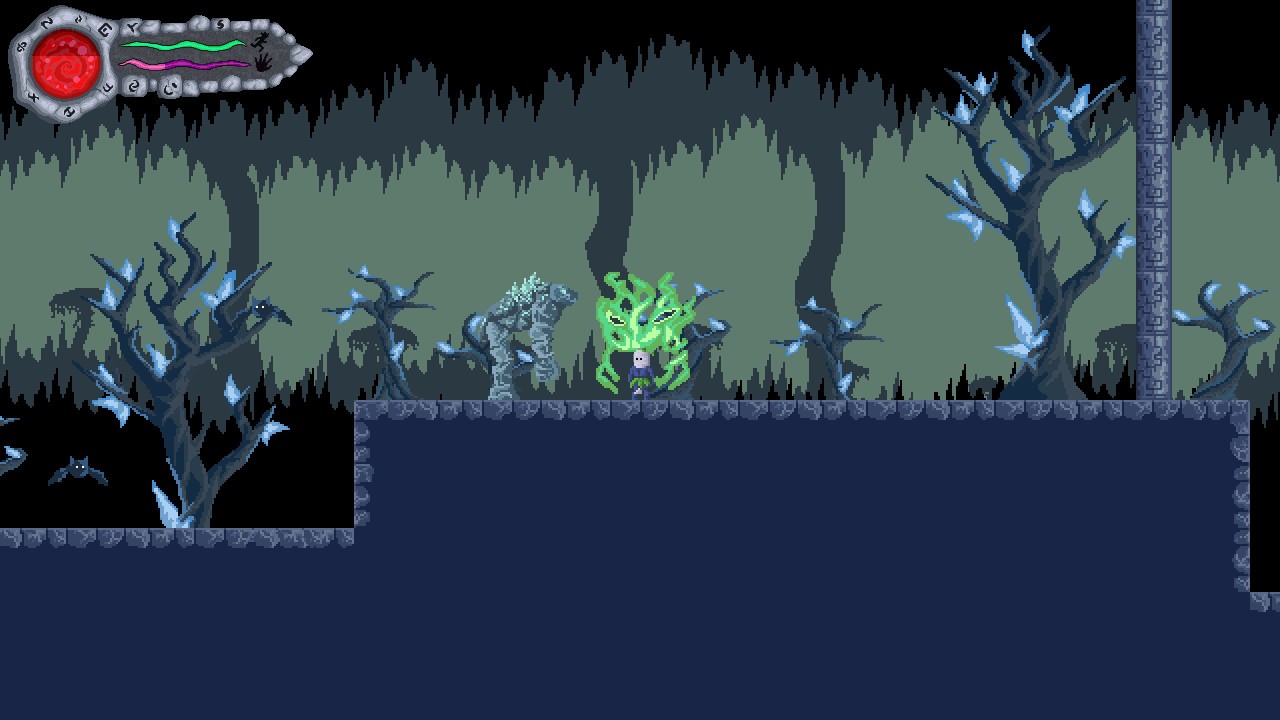 And… that’s about it. There are only four levels which are essentially all the same apart from cosmetic differences in appearance which basically amounts to a change in colour palette. There’s a brief section where you ride a chicken and must jump and duck over the landscape as it automatically charges forward which provides a tiny bit of variety, and there’s a boss to fight at the end of the game. However the most noteworthy aspect of this end-of-game boss is how unimpressive they are, standing on the same spot throwing a few easy to avoid fireballs at you before dying after a few hits. I breezed past the boss on my first attempt in about 20 seconds for one of the most anti-climactic game endings of all time.

In fact the whole, brief game is far too easy. The environments are sparsely populated with enemies who can be easily killed or just avoided entirely (I think the only enemy you actually need to fight is the end game boss). And on top of this you benefit from a lot of health, plentiful health pick-ups, regular checkpoints and unlimited lives. Not only that but the platforming aspects also lack any form of challenge, it’s fair to say to Aborigenus is one of the easiest games I’ve ever played.

Considering how quickly the game can be completed this is a major problem, especially as there is no real incentive to replay it. Completing the game doesn’t open up any new options, there are no extra difficulty settings or time-attack modes. The only possible reason to make a second run through the game is to mop up any achievements you missed the first time by maxing out some different skills. 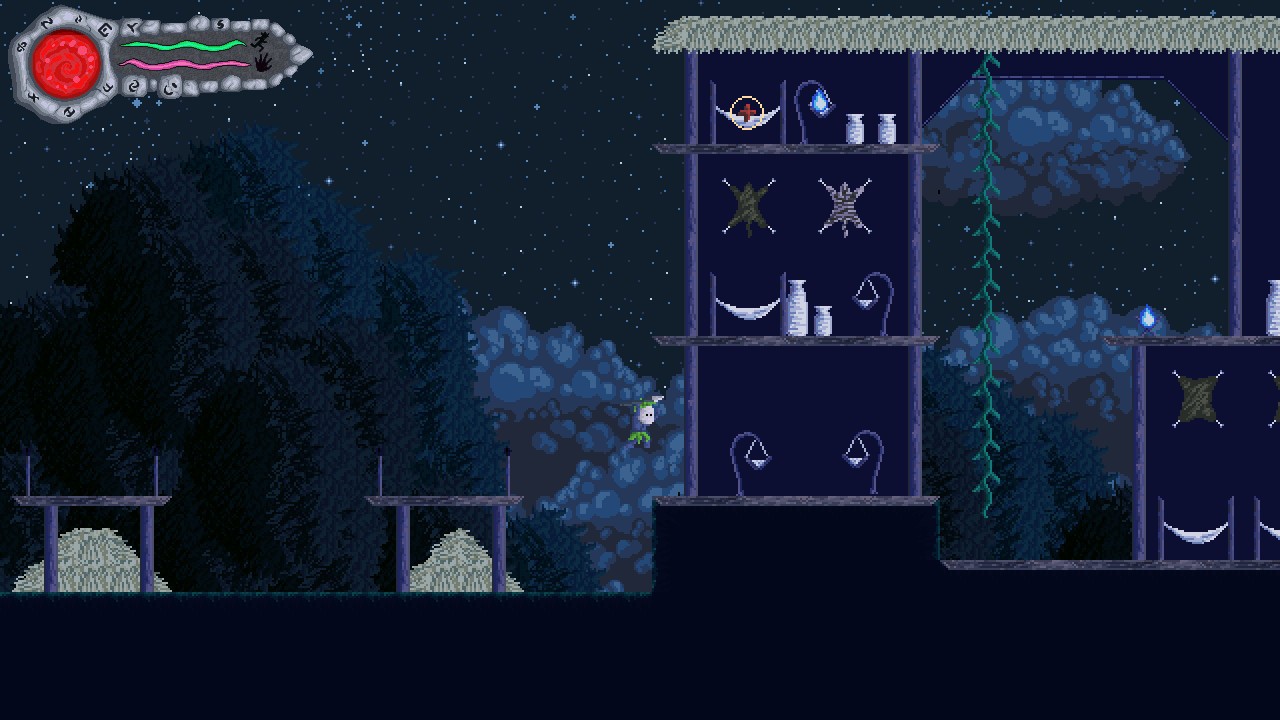 On a positive note the music is quite good and matches the visuals quite well. But this then leads me onto a personal bugbear with the poorly designed interface. The health indicator is light red on a dark red background which is difficult to see even if you have good eyesight, while the stealth and magic bars have similar problems. Also, it actually took me a while to work out what the stealth bar was as the icon next to it is of a stick man running which is not very obvious at all. Added to this is the fact the only settings in the game you can change is music and sound (no sliding scale, just on or off), a particularly ugly home screen with a blue on blue them and most bizarrely of all – the pause/menu screen is mapped to the right bumper button!

If it was free or a demo to a more complete game I could begrudgingly recommend Aborigenus to those looking for a basic, unchallenging platformer but in it’s current state it’s far too brief and unpolished to warrant a purchase.

Aborigenus is a primitive platformer that has some glimmers of good ideas but ultimately it’s brief length dooms it to extinction.