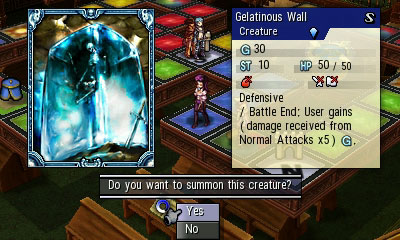 When it works, Culdcept Revolt is a fun experience–a tug-of-war power struggle that will keep you on the edge of your seat. It requires strategic planning, some familiarity with the cards that both you and your opponents use, and the gamble of risk versus reward. When it doesn’t work, however, Culdcept Revolt is an exercise in frustration. The dice seem weighted against you and if the opponent gets far enough ahead of you, it’s almost impossible to catch up.

The story is as follows: you’ve lost your memory and have no idea where you are (surprise, surprise) or how you got here. Alicia, the leader of the rebel organization… Free Bats, which is just about the worst make I’ve ever heard for a revel organization, and her compatriots discovered you passed out in the city, Celphas. Celphas is ruled by Count Kraniss, who is targeting Cepters for one reason or another, and that’s where you come in. Your Cepter powers are strong and everyone will be gunning for you despite the fact that all you want is to regain your memories.

You begin the game by creating your Cepter, meaning you give the main character a name and then choose between the Books–your deck of cards–Fire and Earth or Wind and Water. Offensive and defensive respectively. Your decision doesn’t make a difference either way because you can get the other later, so it’s advised that you choose whichever element is your favourite.

The game is divided into chapters, the first of which you’ll spend learning the game’s mechanics. None of it is particularly groundbreaking, in my opinion, but there’s enough to make battle a unique experience.

Within a magical arena called the Battle Space, Cepters control cards of Culdcept, which allow them to summon creatures and use spells in a Monopoly-esque property capturing affair. The object of a match is not only to get to a set amount of G, but to make your way to the nearest gate once you have. More on that later.

There’s no coin flip to decide who goes first–it’s always you. At the beginning of your turn, you draw one card. Card types include creatures, spells, and equipment, each of which require magic, denoted by a ‘G.’ Then comes the dice roll. There are two dice, barring special circumstances, that display a symbol that represents zero (unless you get two, which means they act as 6s for a total of 12) and the numbers 1-5. You’re able to select the direction you want your character to take to begin with and then at any subsequent junction, but your main goal should be to pass through the Gate or Gates depending on the shape of the playing field.

You’re given a Gate Bonus for your first pass and they light up to indicate that they’ve been passed during the current turn. Passing through all Gates on the field earns you a lap bonus based on a base amount plus territories. You also earn G each turn (Round Magic) and that magic is expended to use spells and equipment, summon creatures, and execute territory commands.

Creatures should be summoned on land with a matching element for a stat bonus. Some creatures have restrictions as to what terrain they can be summoned on. Creature and territory elements include: fire, water, earth, wind, and neutral. Card stats include attack and durability (HP), item and land restrictions, and abilities. A creature is fatigued when first summoned and cannot act until you stop on a gate or complete a lap.

Creatures have their own attributes that dictate what they can and cannot do. 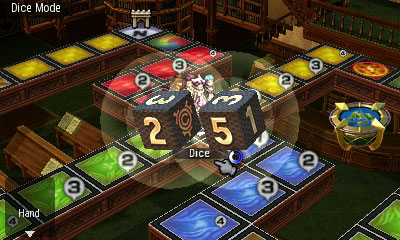 You claim territory by summoning creatures. Claiming multiple plots of the same element results in a chain bonus that increases tolls. Your opponents pay a toll if they land on your territory and fail to defeat the creature sitting there and that’s where the bulk of your G will come from.

Additionally, you can utilize Territory Commands to ensure that your opponents will rue the day they stepped foot in your turf.

Land level up. Each tier costs more magic. Level up increases total G value and the toll another Cepter pays for stopping in your territory– assuming they don’t invade successfully.

Terrain change. Change land element to one better suited to your creature.

Move creature. Move your creature to an adjacent tile. Useful for invading a weaker enemy or for relocating to a better terrain. Some creatures cannot be moved.

After matches, you’re rewarded with  GP, which is used to purchase card packs. Once you’ve accumulated enough cards and experience, you cab try your hand at creating your own book. A book is 50 cards and you’re limited the amount of monsters, spells, and items you can add.

If you visit the online store, you can purchase avatars and dice and book skins to customize your gear. These don’t offer any benefits during battle, but they certainly look neat.

In addition to the campaign, game modes include online ranked, through which you can get a daily prize for logging in, and local versus where you play against the A.I. based on your own settings.

So now that the technical stuff is out of the way, let’s talk about my thoughts on the game.

As far as appearance goes, the character and creature portraits are nicely detailed, but their 3D representations are muddy and, in the case of the monstrous creatures, wimpy looking. Animated battle scenes are also lacking in pizzaz, usually consisting of single slashes or strikes. There’s no voice acting during story cut scenes, oddly enough, though there is an announcer during combat. 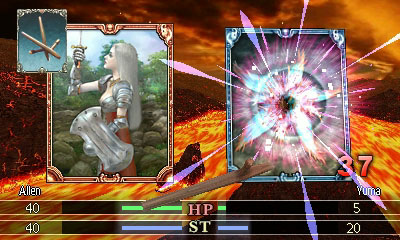 Matches take a half hour or more depending on luck of the draw and how many players are vying for G. This feels painfully long, especially when all you’re doing is see-sawing back and forth with your opponent(s) and is made more painful still by the fact that, if you lose, you’ve wasted a significant amount of your time. There’s no experience to be gained or traits to unlock that would make things easier on you, so a loss has nothing to soften the blow. That half hour is further padded by the A.I. which will shout out something inane at the beginning and end of every turn. It’s irritating and I found myself more often than not ending my turn then fiddling with my phone while I waited for my opponents to make their move. Even with the ability to speed up their turns, they still dragged on.

Though it touts a “gentle learning curve” Culdcept Revolt ramps up the difficulty quite quickly. The A.I., which had been a dullard during the tutorial missions is suddenly a tactical genius the moment you’re on your own. There’s an option to turn off the in-game helper that advises your next move and the game even tells you not to rely too heavily on it, but I found myself on a losing streak as soon as I turned it off.

My biggest problem with the game is the way it handled victory conditions. It’s not enough to simply get a certain amount of points, you must also get to the nearest Gate. During my aforementioned losing streak, I did manage to get the 8000 G necessary to win, but to get to the next gate, I needed a 5. I rolled a 4 instead, and my opponent, who hit the required magic after me, won because it was able to roll high enough. That was the last straw for me and was frustrating enough to make me put down the game–perhaps indefinitely.

Fun when the dice are on your side.

An unusual mix of gameplay elements.

Too much reliance on luck.

Matches take a long time and are anyone’s game depending on luck. You can waste time trying to turn things around to no avail or throw in the towel too early.

The characters are neither likeable or memorable, but puppets for battles with flimsy reasons to justify them.

Veterans of the series may find themselves at home here, but for newbies like me, the game is an unforgiving and frustrating experience. If the difficulty could be massaged and a save and quit option added to battle, it would be a huge improvement. As of right now, I’d only recommend this to fans Culdcept Revolt and those who eat, sleep, and breathe TCGs.