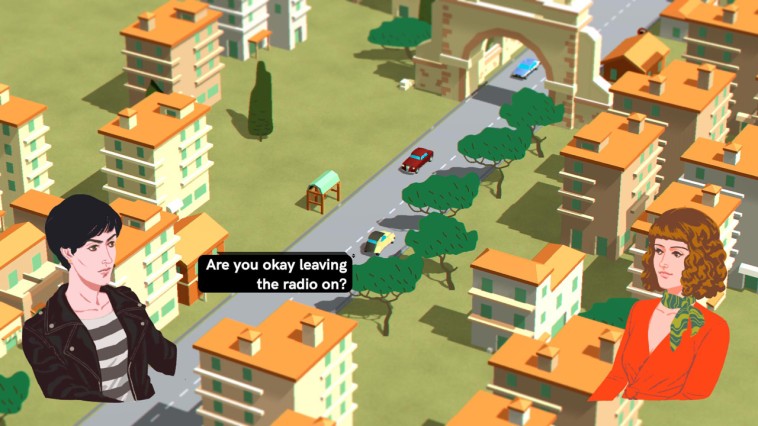 People are always looking for the next way to change the way that we interpret information. What started as screams and cave paintings has evolved into something magnificent in terms of storytelling and communication, even altering form multiple times in my short life. Gone are casette tapes and floppies the size of a sandwich, hello digital imagination and thumbnail-sized cards that hold hundreds of gigabytes. And we’ve gone from written and print to visual and stunning, but the caveat remains that we still have to have something at the core. Without a skeleton, the divine form turns to mush.

Wheels of Aurelia is an experimental visual novel that puts you into the seat of Lella, a roaming free spirit who’s driving across Italy in 1978, bound for France. Along the way, she picks up a young woman who’s hanging at a discotheque and just waiting for adventure to abduct her. Together, they begin a long and verbose journey to some kind of new life, adventure or at least change of scenery, and just the open road and their soundtrack keep the pace and form. Along the way, they meet several different characters with different walks of life all their own, and each paints a new shade onto the picture of this world.

I had high, high hopes when I started Wheels. For one, I’d never heard of the game, and the art style definitely drew me in. It’s got this great pop deco situation that carries throughout the characters’ portraits as well as the cities, towns and countryside they drive through. The controls appeared so simple that I figured there was something deeper to it, especially when I could select my car model and immediately began on a dark night, with Lella musing about the lack of people out and on the road. “Zombies!” I thought. “Maybe some kind of chemical leak!” But it turns out people were just home, relaxing, and didn’t want to go to a disco on a Tuesday night. Disappointed, but still hopeful, I sat through a dynamic opening credits sequels and buckled up for the ride of my life. 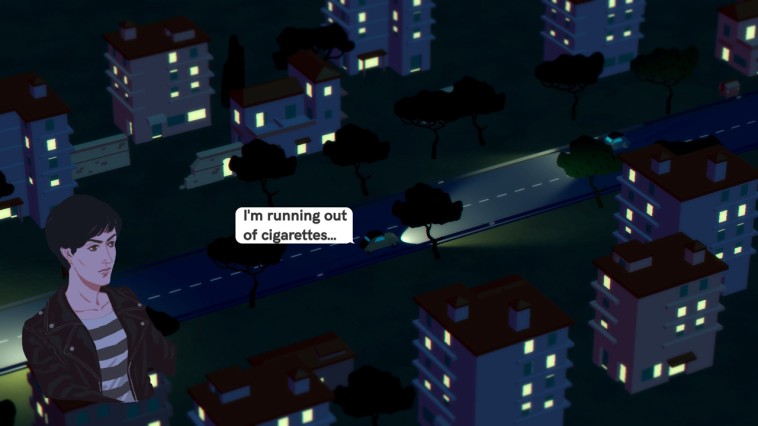 Here’s the thing: you should always wear your seatbelt, regardless of how fast you’re driving. But, when someone tells you to “buckle up,” you anticipate breakneck speeds and wild chases. In fact, I couldn’t have been more bored with the driving aspect of Wheels of Aveline. No matter what I did or how I tried, I might as well have not been driving at all. You can’t go off the road. No one cares if you hit their car (aside from an angry honk or two). You can’t turn around or go backwards. I kept my car perfectly parallel for over a full minute and just got rewarded with white smoke and pissed off drivers, but Lella and her cast of copilots could have seriously cared less.

Instead, Wheels wants you to focus on the conversations happening between everyone, which is, at the core, what a visual novel is. But visual novels usually let you read at your leisure and focus on, well, the conversation, not create this false necessity to drive. If you straight up stop driving and stop caring, the game will autopilot you along, slowly bumping into cars in front of you but not having any penalties in the form of points, damage or even change in the chatting.

So, in theory, the conversation is going to be fantastic, right? That really depends on your interpretation of ideas and facets. Wheels of Aurelia does its best to put you back in time to the late 70s, which was certainly a turbulent and transitional period in Europe and, indeed, the world. Lella is coming from the strong and unique position of a burgeoning feminist, a role that works to both her advantage and disadvantage. On the positive, it fully supports the narrative of her up and driving across Italy alone, restless and eager to see the world without the approval of others or the need for protection. It gives her the gumption and tenacity to handle any unsavory characters that happen across her trip, and, unfortunately, some of the male interactions are as sexist and belittling as you might imagine on first inflection. 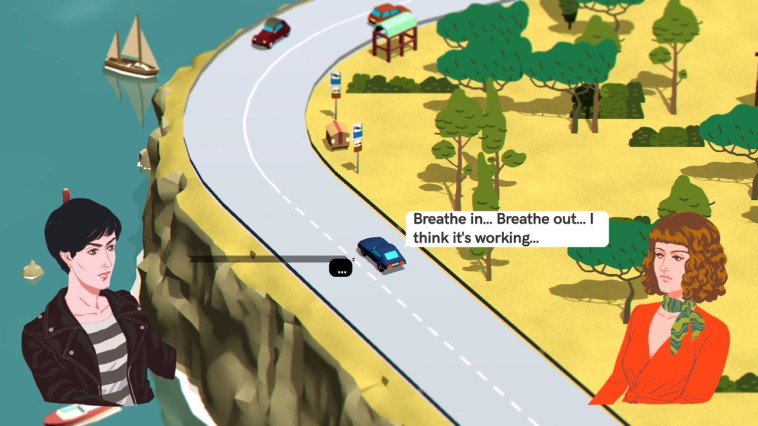 On the other hand, Lella sometimes comes across as overly aggressive and abrasive, which is a side effect of needing to keep yourself safe and assured. Some conversations felt like they began on the wrong foot in spite of anything, but there was always the chance to turn things around. Ultimately, there were times when saying nothing became the best option, and new avenues of dialogue sprang forth from my choice to remain silent. It really depends on your interpretation of things, and how invested you become in the game and Lella’s quest.

I wish, really wish there was a way to speed up the damn conversations, however. Toggling between options has a countdown timer, but that timer seems to reset everytime you change, and then you need to sit and wait for the timer to run down before your speaking choice is utilized. If there was literally any way to just pick a phrase and throw it out instead of letting the game do it for you, I would have been significantly more interested in going back and replaying to unlock one of the additional endings, because Wheels of Aurelia supposedly has multiple. Instead, I was content to have just my one play, and have that option to try other avenues in the future.

It’s not my favorite visual novel, certainly not. This isn’t going to be the deep and tragic investment of House at Fata Morgana, but I don’t feel that Wheels of Aurelia is trying to do that. It’s painting a picture of life and the people from an era that many players nowadays may have a very limited or potentially nonexistent memory regarding. I think that there’s a lot of story being told here, for a very specific and targeted audience. For those who want a tale to be spun of their own design, but want to try and simulate the idea of being in control of something else at the same time. For those who want to live the many lives of Lella as she tries again and again to find whatever it is she’s looking for, and potentially helping others along the way. I think this is a game that will either hit hard or strike out with players, and, unfortunately for me, this is a big miss.  If what I said was interesting, by all means, support the developers, but I won’t be coming back out along these roads anytime soon.